When the coronavirus pandemic closed schools and daycare centers in Colorado earlier this year, Tina Carroll faced a no-win choice: Keep her job at a local university, which required her to work in-person, or quit her career to stay home with her 6-year-old son.

Carroll, a single mom in Denver, could not afford to quit her job, so she sent her son to live with relatives in Georgia for the summer.

Now with the school year back underway via virtual learning, Carroll is paying an additional nearly $1,200 month for child care, an amount she says is not sustainable for even the very near future.

"I had to figure out an amount of money to get me through an 8 to 5 workday," Carroll told "Good Morning America." "But it's a huge sacrifice."

"I feel like working parents are at their tipping point," she said. 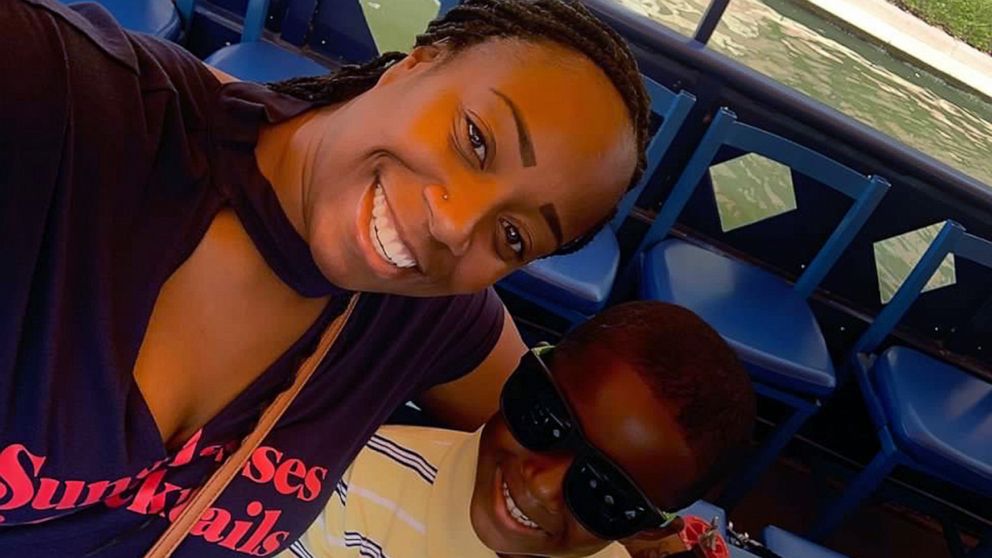 More specifically, the child care crisis cracked wide open by the coronavirus pandemic has put mothers in the workplace at a tipping point, one that could set them back for generations, according to experts who are calling the current economic crisis a "shecession" because of its disproportionate impact on women.

Between February and April, women lost 12.1 million jobs, reversing a decade's worth of employment gains, according to the National Women's Law Center (NWLC), a policy-focused organization that fights for gender justice.

In the month of September, four times more women than men dropped out of the U.S. labor force

The unemployment rate for adult women in September was 7.7%, compared to 7.4% for men, according to the U.S. Bureau of Labor Statistics (BLS). Even with these numbers, it is difficult to fully count the number of women out of the workforce because to count as unemployed, workers must be actively looking for new positions.

MORE: With women's unemployment sky high, this recession is a 'shecession,' expert says

While women ages 25 to 44 are almost three times as likely as men to not be working during the pandemic due to child care demands, mothers who are working from home during the pandemic have reduced their working hours four to five times more than fathers have, according to a study published in the journal Gender Work & Organization. 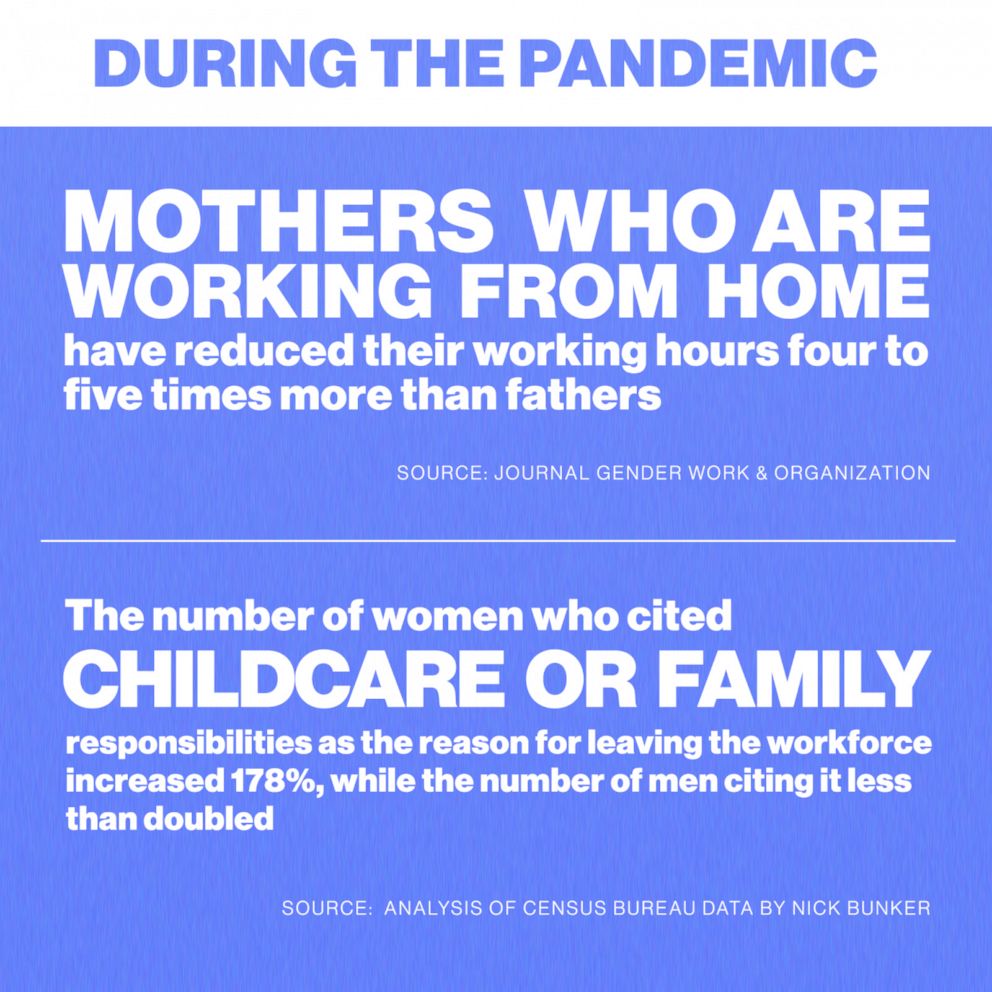 Meanwhile, as many as 50% of child care centers in the U.S. could close by the end of the year if they are not provided with more assistance, according to Rhian Allvin, CEO of the National Association for the Education of Young Children, a nonprofit association.

"The COVID crisis has exposed the fragility of the [child care] sector," Allvin told "Good Morning America." "It's costly to operate and what we know is parents can't pay more and early childhood educators can't earn less."

How we reached a 'tipping point' for working moms

With women at the helm, caregiving has long been devalued in the U.S., resulting in low pay and little public investment, according to Sonya Alice Michel, professor emerita of history at the University of Maryland.

"It really wasn't until World War II that women were drafted into the labor force and governments realized that, if women worked, they'd need some kind of child care for their children," said Michel. "After the closing of the wartime child care centers, it wasn't until the women's movement in the 1960s and '70s that child care became highlighted as a public issue."

Without any public mandate for child care to ensure that women could thrive in the workforce, the child care system was left as a patchwork system operating with little public infrastructure, driving up costs while the predominantly female child care workforce makes on average $11 per hour.

In nearly two dozen states, the costs of child care exceed $20,000 per year

At the same time women face a gender pay gap where they earn around 80 cents for each dollar their male co-workers make, the costs of child care now exceed $20,000 per year in nearly two dozen states, according to Child Care Aware of America, a nonprofit organization that works to make child care in the U.S. high-quality and affordable.

At home, women more often than men take on the tasks of "invisible labor", adding to their workload.

During the pandemic, the number of women who cited child care or family responsibilities as the reason for leaving the workforce increased 178%, while the number of men citing it less than doubled, according to an analysis of Census Bureau data by Nick Bunker, economic research director for North America at the Indeed Hiring Lab.

Once women leave the workforce because of these strains, it is harder to return and they face a trajectory of decreased pay over the course of their careers, data shows.

The difficulty is even worse for women of color, who report higher levels of difficulty finding child care than white mothers, who often live in so-called "daycare deserts," research shows, and who face even greater income inequality than white women.

The difficulty is even worse for women of color

Kenya Bradshaw, vice president of an education company with 500 employees, said she started seeing an overwhelming number of female employees using up vacation days early on in the pandemic, and is now seeing them leave their jobs because of child care issues.

"Many of our women actually make more than their husbands, but they are the ones who are the lead child care provider, so because of that, their families are also taking on some additional economic strain," she said. "These are middle class women I'm talking about in most cases."

"I'm concerned about the burden of low to moderate wage employees who don't even have the flexibility to make that decision," added Bradshaw, who received thousands of replies when she posted about the topic on social media.

If the school is the only institution that is keeping us from breaking as a country, then we have a problem and we need to fix that

"If the school is the only institution that is keeping us from breaking as a country, then we have a problem and we need to fix that," she said. "This is not an individual household problem and we as a country need to think about this."

Working moms total about 23.5 million in the U.S., or nearly one-third of all employed women, according to Census data.

For the economy to come back even stronger after the pandemic, the needs of working moms when it comes to child care cannot be ignored, experts say.

"Child care is the backbone to the American economy and lack of child care is the biggest barrier for women to be fully employed," said Allvin. "Without safe, affordable, high quality child care, the rest of America doesn't work."

The child care industry was allotted $3.5 billion in emergency aid in March under the Coronavirus Aid, Relief, and Economic Security Act, or Cares Act, which also gave some parents eligibility for unemployment benefits, but child care advocates say it is not enough to help the industry long term.

Also not enough, advocates say, are the state policies that popped up to try to help child care centers during the pandemic.

"A lot of those were temporary fixes and may not be extended as states reopen," said Lynette Fraga, Ph.D., CEO of Child Care Aware of America. "There is no doubt that a federal solution is absolutely necessary, and a federal investment, supported by state solutions and state-by-state policies, that can raise up that federal solution."

There is no doubt that a federal solution is absolutely necessary

One federal solution, the Child Care Is Essential Act, sponsored by Rep. Rosa DeLauro, D-Conn., would give $50 billion to help child care centers during and after the coronavirus pandemic. The legislation passed the House of Representatives in July, but is stalled in the Senate, where it is sponsored by Sen. Patty Murray, D-Wash.

The former vice president's plan, announced in July, centers around expanding access to long-term care for elderly and disabled Americans, as well as creating accessible, safe child care options for working parents. The plan would create 1.5 million new jobs in both fields and would also focus on increasing pay for caregivers and early childhood educators, say advisers. 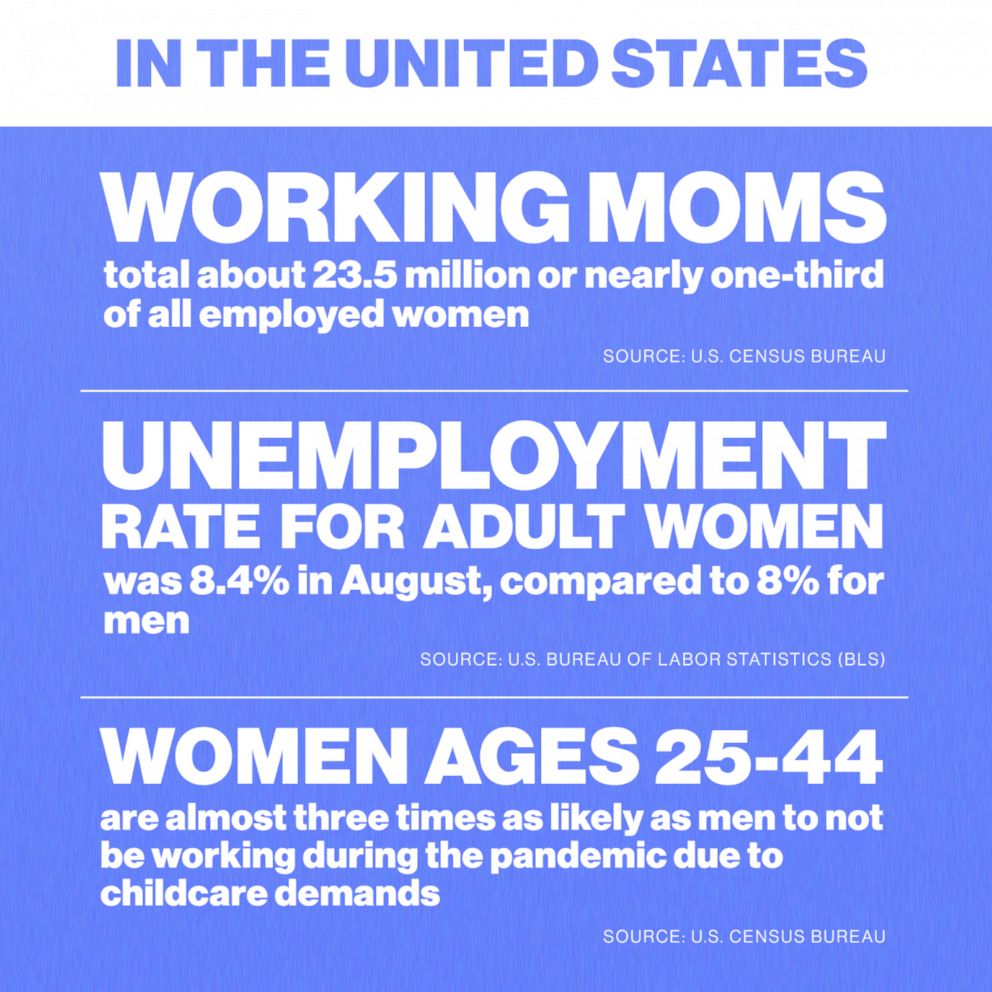 “President Trump has always prioritized increasing access to affordable, high quality child care in America, and in the midst of an unprecedented pandemic, that’s never been more important," Samantha Zager, deputy national press secretary for the Trump campaign told "GMA" in a statement. "Hardworking parents across America are empowered under President Trump, and he’ll continue his focus on ensuring the U.S. is the best place in the world to conduct business, work, and raise a family over the next four years.”

In the U.S., parents spend about $42 billion per year on early care and education, while public spending, a mix of federal, state and local government money, is about $34 billion, according to the Economic Policy Institute, a nonprofit, nonpartisan think tank.

In a 2015 report showing public spending on early childhood education and care as a percentage of countries' GDPs, Iceland and Sweden topped the list, while the U.S. ranked nearly last.

"It's so unwise for the government to not fund child care," said Michel. "It has long-term consequences, not just for individuals and families but for society as a whole."