Mothers, especially those with young children and who are working from home during the coronavirus pandemic, have reduced their working hours four to five times more than fathers have, according to a new study.

The study, which will be published in the journal Gender Work & Organization, found that while fathers' working schedules have stayed the same, working mothers have reduced their hours around two hours per week, on average.

"That doesn’t sound like a lot but for folks who study this, two hours per week is a pretty monumental shift," Caitlyn Collins, an assistant professor of sociology at Washington University in St. Louis and one of the study's four co-authors, told "Good Morning America." "If you think about how that adds up over the course of weeks, months and even years, this has really negative career consequences for women in the long term."

The study results ring true for Aliza Friedlander, a Baltimore-based freelance journalist who has been the primary caretaker for her 4- and 6-year-old daughters while her husband has shifted his full-time job to the family's home during the pandemic.

MORE: Mom gives husband 'COVID contract' of responsibilities: 'It was the only way'

"He got a desk and made himself an office in a back room he has upstairs and he can go there and close his door," Friedlander told "GMA." "We have two chairs in the playroom and one is in the corner and that is my office."

She added, "He’s definitely working and I’m taking care of the kids and it's a theme that probably rings true for most mothers."

At the start of the coronavrius pandemic in the U.S. in March, women reported being more stressed than men about the pandemic and taking more precautions because of it.

As more businesses were forced to close over the next several months and schools switched to virtual learning, the burden fell largely on working moms to take care of their kids, become remote teachers while still handling normal household duties and working full-time for women whose jobs allowed them to telecommute, data shows.

"What we put on women’s shoulders in general in the U.S. has already been untenable. We’ve known that for a long time," said Collins, who studies gender inequality in the workplace and in family life. "If several months into the pandemic we see women reducing their work hours by around two hours a week or four to five times that of fathers, if we think through what it means for schools to remain shuttered, for classes to be done largely online, daycares to primarily remain closed across the country, the difficulties that parents are facing to juggle paid work and caregiving in the home are only going to continue to cause problems but also likely to be exacerbated."

Collins and her co-authors used U.S. Census Bureau data to examine changes in the working hours of married heterosexual couples who were both working full-time from home between February and April of this year.

The results they found showing that working moms are being forced to take more time away from their jobs to care for their kids comes on top of other data showing how disproportionately hard hit women have been in the workplace during the pandemic.

Experts are calling the current economic setback in the U.S. a "she-cession" because for the first time in history, the nation's unemployment claims have a largely female, non-white face to them.

The unemployment rate for adult women is now 11.2%, with even higher rates for Hispanic and Black women, according to the Bureau of Labor Statistics (BLS).

By comparison, the unemployment rate for adult men is currently 10.2%. 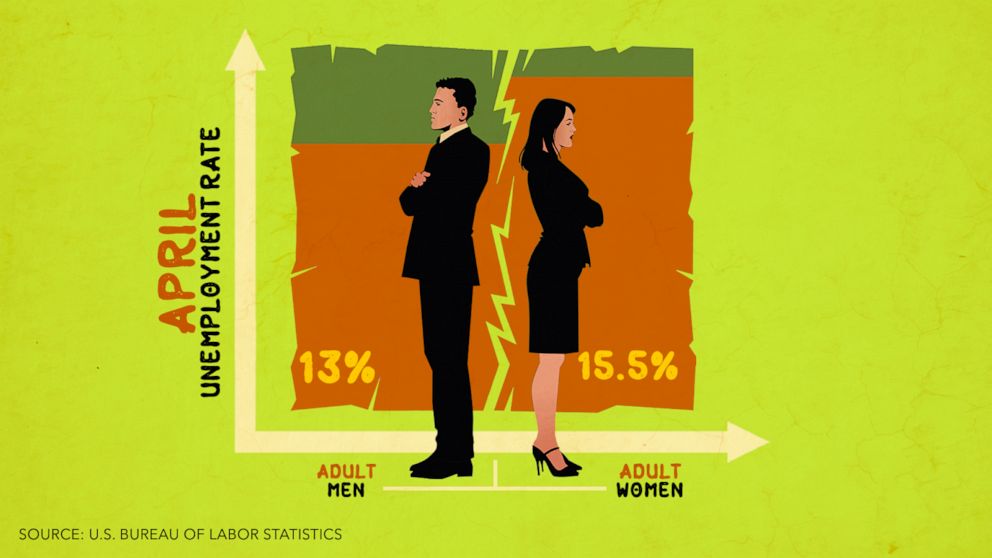 The bleak economic reality for women on top of the difficulties moms who are employed face to do their jobs could lead to more and more women leaving the workforce, warned Collins.

"I think that the tensions are only going to increase in the coming months and years," she said. "My fear is that it means more women are going to reduce their working hours or even step out of the paid labor force which again is this downward spiral that has very troubling consequences for women’s economic independence over the life course."

Collins said she hopes the data serves as a wake-up call to both employers and legislators, the latter of whom have the power to pass work family policies to support both working moms and dads.

"I think that studies like ours help lay the groundwork for very, very compelling political arguments for passing more robust and supportive work family policies that the rest of the Western industrialized world already has and is really helping support working parents through this difficult time with legally mandated flex policies for parents, for paid leave, for substantial vacation and sick days that are a right for workers," she said. "We have none of those protections and benefits here in the U.S. and I think had we had those in place already we would not see things look quite as disastrous as they do now."

The burden for changing the system should also not fall solely on working mom's shoulders, noted Collins. She said fathers need to step up and employers need to make adjustments for both moms and dads in the workforce.

"It’s not about just behavioral change on the part of women or supporting just women, it’s also about supporting men and also encouraging them and in fact incentivizing them to participate in family life," she said. "Part of the difficulty in the U.S. with a gender-neutral [work family] policy is that it will be disproportionately women using it for caregiving purposes."

Friedlander said her husband's ability to work from home has allowed for a much-appreciated increase in the amount of time he's been able to spend with her and their children. She hopes employers come out of the pandemic recognizing the value of work arrangements like telecommuting and flexible work hours that allow people to be both parents and professionals.

"I want to be a mom and I want to be a professional and I hope that employers see after this that it is very possible," said Friedlander, who stepped back from her role as a television news producer when she became a mom. "And I think the same goes for fathers too. I feel the same way for my husband."