President Donald Trump waded into a domestic culture war about the burden of household work, a flashpoint that has been emphasized with the coronavirus pandemic keeping more families at home.

The topic came up as the president was asked about the State Department inspector general, who was fired by Trump late Friday and was reportedly looking into claims that Secretary of State Mike Pompeo used a political appointee to run personal errands and do domestic tasks.

"Look, he's a high-quality person, Mike. He's a very high quality -- he's a very brilliant guy," Trump said at a roundtable Monday with restaurant executives, according to an official White House transcript. "And now I have you telling me about dog walking, washing dishes."

"And you know what? I'd rather have him on the phone with some world leader than have him wash dishes, because maybe his wife isn't there or his kids aren't there. You know," he said. "What are you telling me? It's terrible. It's so stupid. You know how stupid that sounds to the world? Unbelievable." 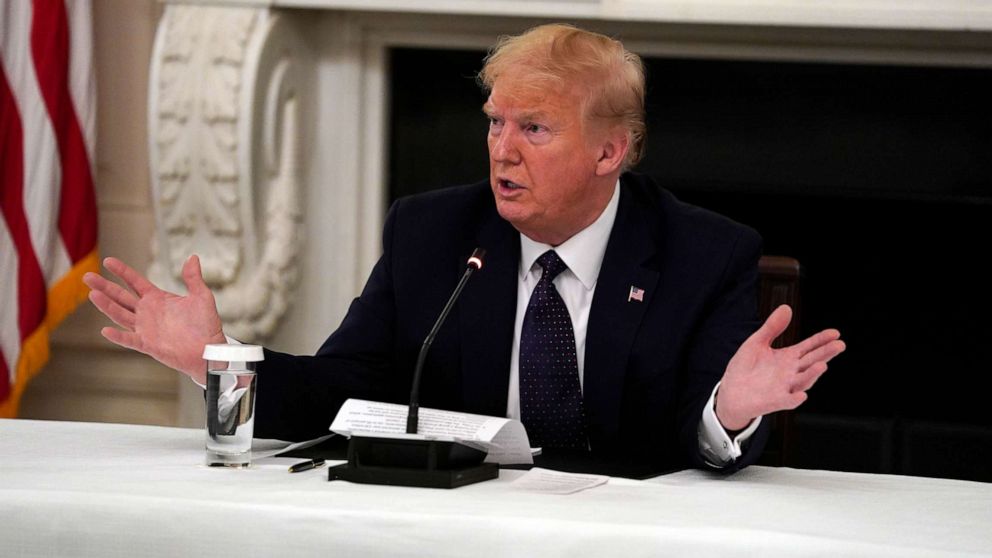 Evan Vucci/AP, FILE
President Donald Trump tells reporters that he is taking zinc and hydroxychloroquine during a meeting with restaurant industry executives about the coronavirus response, in the State Dining Room of the White House, May 18, 2020, in Washington.

According to House Foreign Affairs Committee chair Rep. Eliot Engel, D-NY, the Office of Inspector General was investigating Pompeo for using the staffer to run errands. A congressional aide told ABC News it included walking the family dog, picking up dry cleaning, and making dinner reservations, but not doing household chores like dishes.

Secretary Pompeo and his wife Susan have been married since 2000, first meeting in business when she represented a bank from which his aerospace company got a loan, according to Pompeo. The couple share a son, Nick.

In addition to serving on museum and nonprofit boards, Susan Pompeo acts as an informal adviser to her husband on housing and working conditions for the families of U.S. diplomats overseas -- with the Secretary calling her a "force multiplier." She's also traveled with him often, with her own staff, itinerary, and security detail, including to hot spots like Baghdad and to her husband's ancestral hometown in Italy. 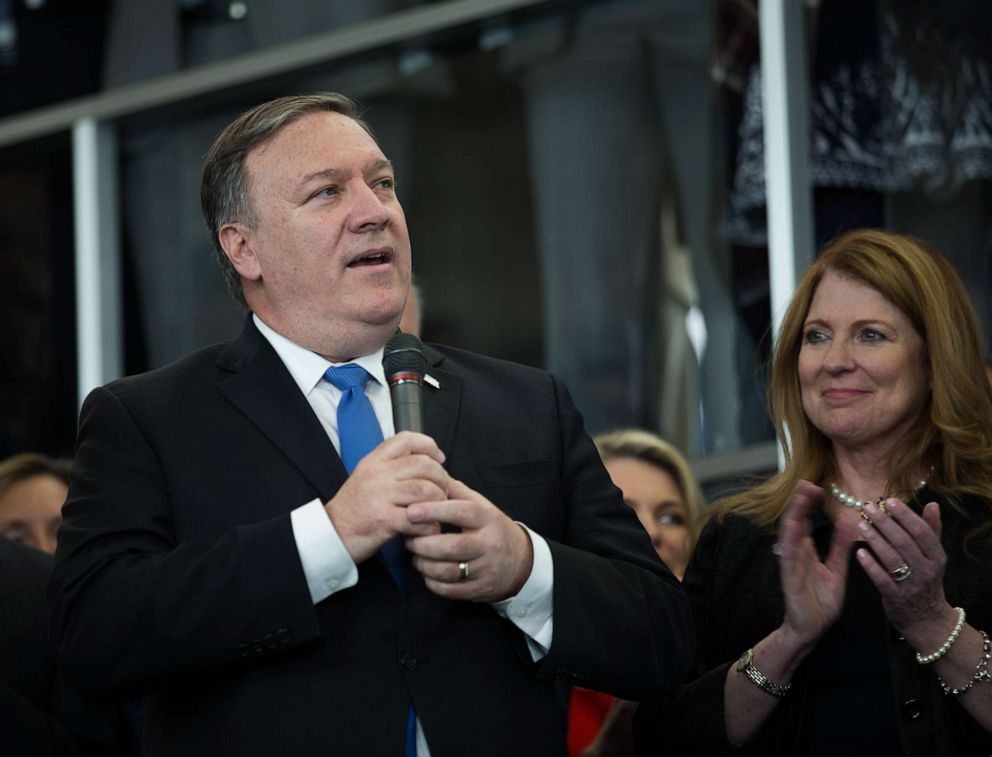 Anadolu Agency via Getty Images, FILE
Secretary of State Mike Pompeo delivers remarks during a welcome ceremony with his wife Susan Pompeo in the lobby of the Harry S. Truman Building on May 1, 2018 in Washington.

The apparent inference by Trump that a wife, including that of the U.S. secretary of state, should be in the background doing dishes so her husband can work did not sit well with advocates for equal divisions of work at both the home and the office.

The president's comments come at a time when the heavy domestic burden that women carry has been laid bare, with women taking on increased tasks at home during the pandemic, especially with schools closed, and the women's unemployment rate now surpassing men's, according to the U.S. Bureau of Labor Statistics (BLS).

"This crisis is forcing us to reexamine the home and instead of just going back to old sexist trope, like women should be the ones doing dishes, there's a real opportunity here to define what the home really means and what teamwork really means," author Eve Rodsky told "Good Morning America." "To me that's the silver lining, but it feels deeply painful to hear a national leader go back to an old trope that is very disempowering to women."

Rodsky is the author of the bestselling book "Fair Play" that explores how women bear the brunt of child-rearing and domestic life responsibilities, whether they work outside the home or not, and offers ways couples can divide the domestic load.

"What Trump is talking about is old, 20th-century tropes, and it's time to treat the home in a 21st-century way, especially because we're all in [our homes] right now," said Rodsky. "The home should be treated as our most important organization that requires respect and and some rigor and where everybody is a teammate. It may not be equal but it has to feel fair to everybody."

"What's not fair is assuming that regardless of who Pompeo's wife is that she's going to be the one doing the dishes so that Pompeo can get back to work, or making assumptions of outsourcing, which typically falls to women of color," she said.

Women fall behind at home, on the job

Even in the best of non-pandemic times, research has shown that women in opposite-sex couples do more of the domestic work in the household, even if they make more money outside the home. A 2019 Harvard University study found that women hold the cognitive labor for household tasks, including anticipating and monitoring what needs to be done.

In the workplace, women face a gender pay gap, earning around 80 cents for every dollar their male coworkers make, as well as the so-called motherhood penalty that sees their wages decrease as they have kids.

Walt Disney Television
Eve Rodsky, author of the book Fair Play, shows couples how to build a stronger marriage through sharing the workload at home.

During this pandemic, the invisible work that women do, both at home and in low-paying jobs like cleaning, cooking and teaching, is being made more visible, experts say. But it's too soon to tell if any lasting changes, negative or positive, on how we as a society view women and work may emerge.

"We know one of the reasons men are not as involved in the family is because they are not at home and they are more likely to be in the labor force and in jobs without expectations that they also have families to care for, and this pandemic really has disrupted that," said Joanna Pepin, a sociologist a the University of Texas at Austin who studies families and gender inequalities. "The work-family boundaries have dissolved and it's really changing the way people are thinking about everything."

"On the other hand, we know that unemployment is hitting women harder than it is men," she said. "We know that even short bursts of unemployment or time out of the labor force affects women's wages and influences their attachment to the labor force. If they can't find a job or give up, the way that we interpret women's labor may shift."

David G. Smith and W. Brad Johnson, the authors of the forthcoming book "Good Guys: How Men Can Be Better Allies for Women in the Workplace," say men, including leaders like Trump, need to be the ones to step up and take on the unpaid, cognitive labor that women already do -- and do it loudly.

"Women after women that we interviewed told us, 'Look, if you're a guy who wants to be an ally in the workforce, you can't show up at work and turn on your ally cape if you're not an ally at home to your partner,'" said Johnson, a professor of psychology at the U.S. Naval Academy and former lieutenant commander in the Navy's Medical Service Corps. "If you have a partner, if you have children, do the chores, do your 50-50."

"If you're not sure if you're a full partner at home, ask your partner, ask for a domestic audit, and when you get the feedback, don't get defensive, find out how you can be better," he said. "Do the emotional labor of tracking, planning, organizing family activities and occasions."

Smith, an associate professor of sociology at the U.S. Naval War College and a former Navy pilot, said men need to use and be vocal about options like paternity leave, advocate for the types of telework and remote work options they're using now during the pandemic, and take paid leave so it is not only women leaving work when children are home sick or a family member is in need.

"Brad and I talk a lot about the fact that you need to leave loudly," he said. "Too many times guys will try to slink out the back door because they don't want to be seen leaving early to go do this unpaid work. We have to make it part of the normal part of who we are and what we do out there and really role model it." 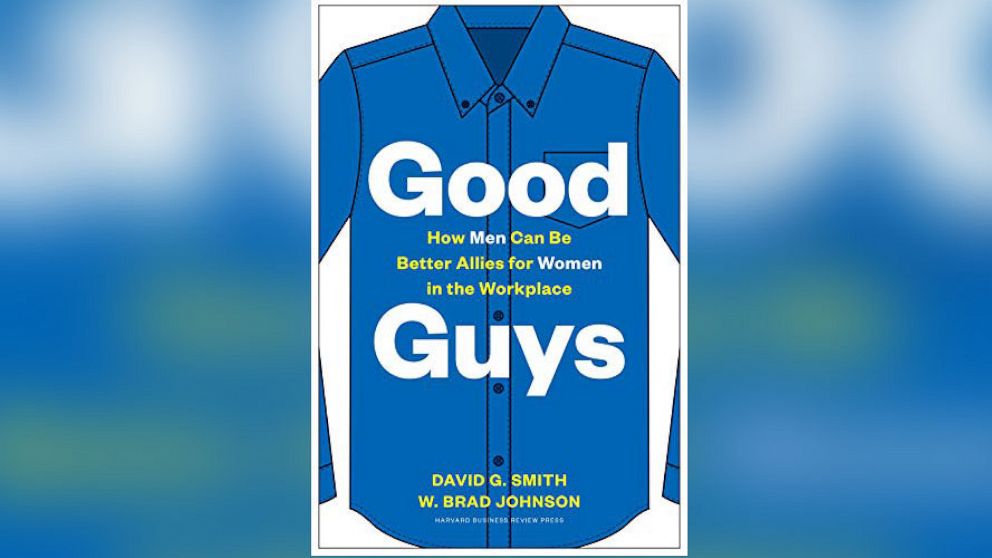 Harvard Business Review Press
The book cover for "Good Guys: How Men Can Be Better Allies for Women in the Workplace," 2020, by David G. Smith and W. Brad Johnson.

Both Smith and Johnson also pointed out that men, not just women, can play a part by speaking out about comments like those made by Trump that they say bring up "old gender roles."

"The old gender roles that women's work is in the home and not as valuable as men's work are so outdated and yet they're really slippery," said Johnson. "They slip into conversations. They slip into assumptions and unless we're really careful about this we just kind of keep recycling these."

"I think men need to be disrupters at this moment," he said. "After the president says something like he did yesterday, I can say something to my colleagues about it on our next Zoom meeting. If I want to be an ally, I have to be willing to put some skin in the game and say something."