By Haley Yamada
Video by Faith Bernstein
Share —
Sign up for our newsletters to get GMA delivered to your inbox every morning!

This dog is more than just a good boy -- he’s an honorary doctor of veterinary medicine.

Meet Moose, an 8-year-old therapy dog at Virginia Tech’s Cook Counseling Center in Blacksburg, Virginia. Since 2014, Moose has worked with thousands of students and aided more than 7,500 counseling sessions, according to owner Trent Davis, a licensed counselor and coordinator of animal-assisted therapy. 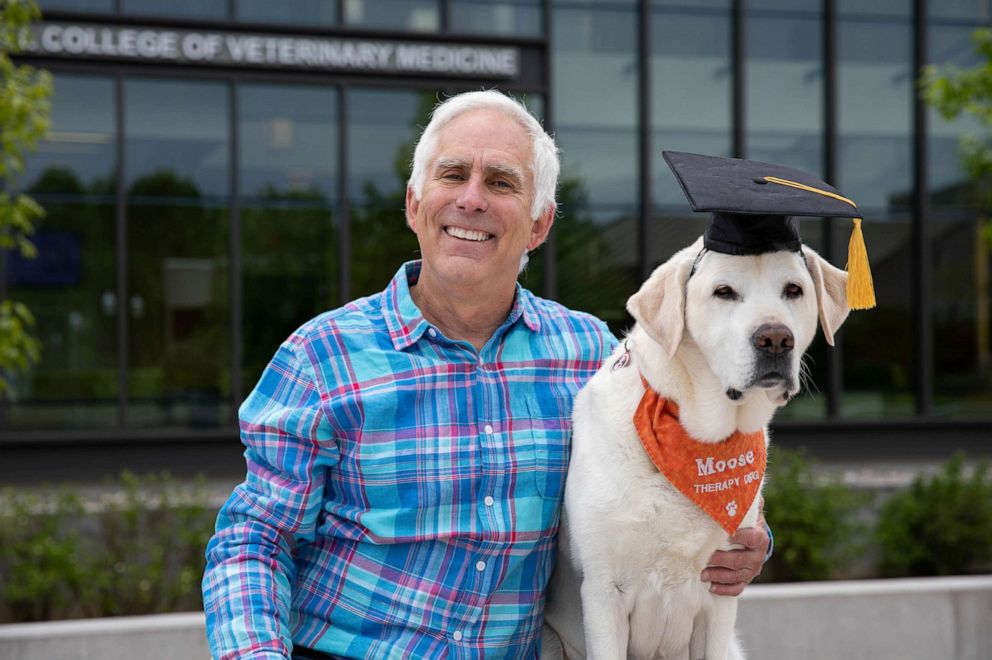 Courtesy of Virginia Tech
Trent Davis is a licensed professional counselor and has been the coordinator of animal-assisted therapy in the Cook Counseling Center at Virginia Tech for 10 years.
MORE: Read Matthew McConaughey's full 'GMA' commencement speech to 2020 grads

Davis said he was told by the school's dean, that Moose would be an honorary 2020 graduate during the virtual commencement and would receive an official honorary doctorate in veterinary medicine.

“[Moose] is going to get a diploma and everything,” said Davis. “I guess, a little caveat is that he is a dog. He can’t actually apply for a job. Although, he would be a pretty good veterinarian.”.

It’s happy news for Moose in the wake of a few challenging months for the beloved Labrador retriever. In February, a week after his eighth birthday, Moose was diagnosed with prostate cancer. 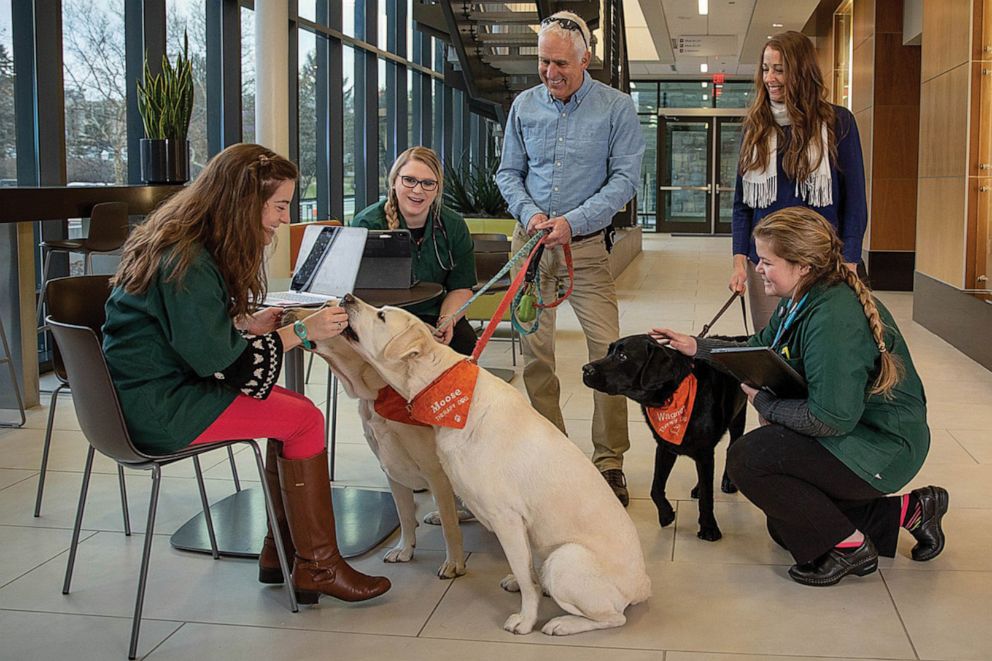 Courtesy of Virginia Tech
According to Virginia Tech, Moose has aided more than 7,500 student counseling sessions since 2014.

“We noticed some blood on his urethra and I took him in,” said Davis, who noted that prostate cancer can be particularly aggressive in dogs because of the prostate's position on the bladder. “He started treatment immediately.”

After months of treatment and with the generous help of a few human colleagues, Moose was able to return home last week, said Davis.

Moose is one of four therapy dogs at the Cook Counseling Center, and has made a grand impact within the Virginia Tech community that he serves, said Davis. 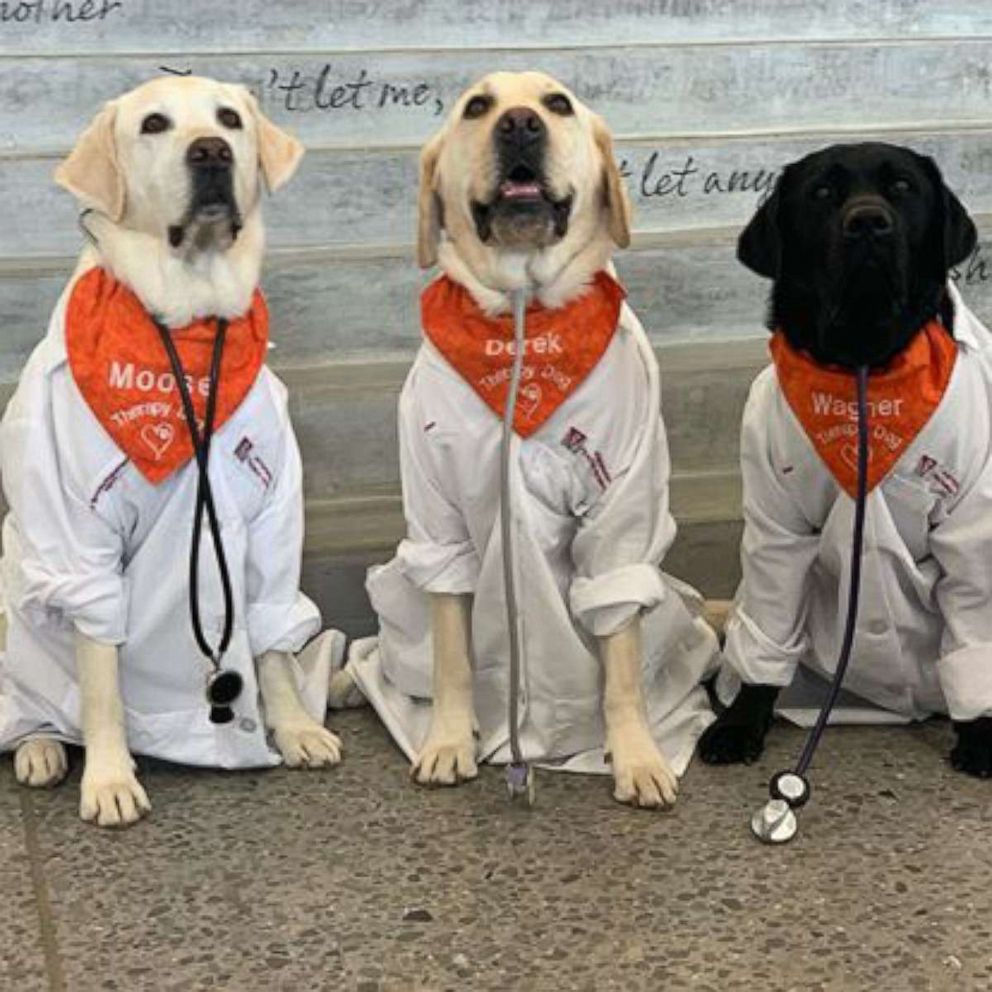 Courtesy of Virginia Tech
Moose, pictured with fellow therapy dogs, Derek and Wagner, at an unknown date in Blacksburg, VA.

“A lot of people say to me, ‘Well, how does the therapy dog work?’ Well, [I bring Moose] in public and [people] are down on the ground, petting the dog and all of a sudden talking in a baby voice,” said Davis, whose dogs and human coordinators go through extensive therapy dog certifications. “[Dogs] provide a source of comfort and grounding. For a lot of humans, unfortunately, other humans haven’t always been the best to them in their lives, so dogs can be a little bit safer.” 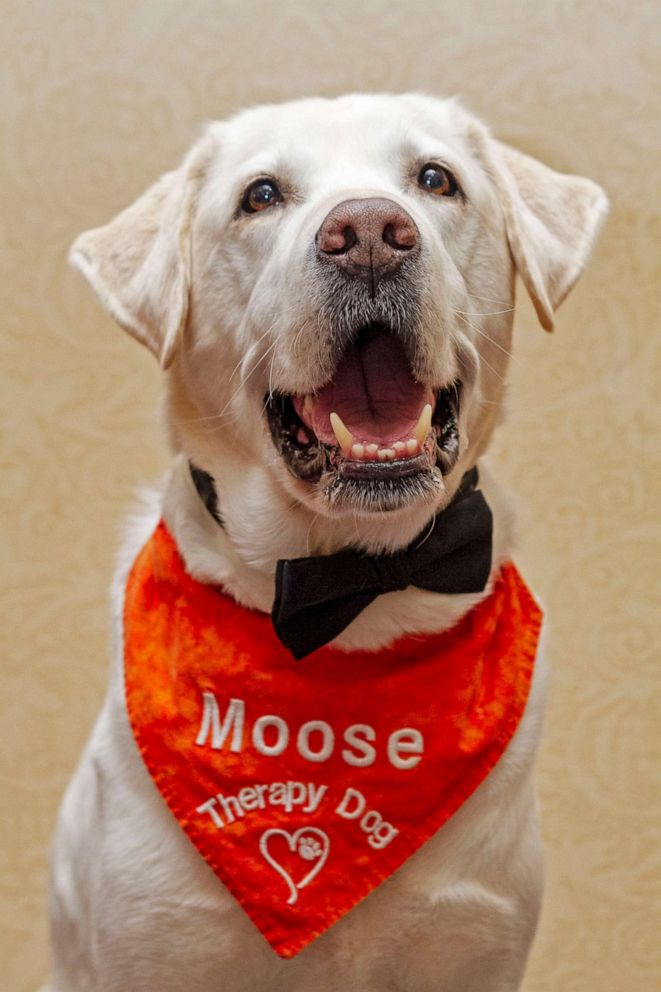 Courtesy of Virginia Tech
8-year-old Moose has been battling prostate cancer since February 2020.
MORE: Read Oprah Winfrey's commencement speech to the class of 2020

“There are record numbers of [mental health concerns] on college campuses … When people keep saying ‘This is the best part of my day [when they’re with Moose],’ you start to believe that maybe there’s something to that,” added Davis.

According to Davis, Moose plans on celebrating his honorary degree by eating, sleeping and chasing a bally. Hopefully, if the weather is right, Moose plans on swimming, his favorite summer activity.