An anonymous donor recently took the opportunity to pay it forward in a major way at a Dunkin' in Beavercreek, Ohio.

On Friday, March 12, a customer in the Dunkin' drive-thru asked to purchase a $1,000 gift card in order to pay for the rest of the day's orders on behalf of future customers. After being asked by the location's general manager, Samantha Owens, to come inside, that person increased the offer to $4,000.

Owens, an Ohio native who's worked at Dunkin' 2 1/2 years, said that the shop's gift cards can't exceed $100, so the donor needed quite a few cards. 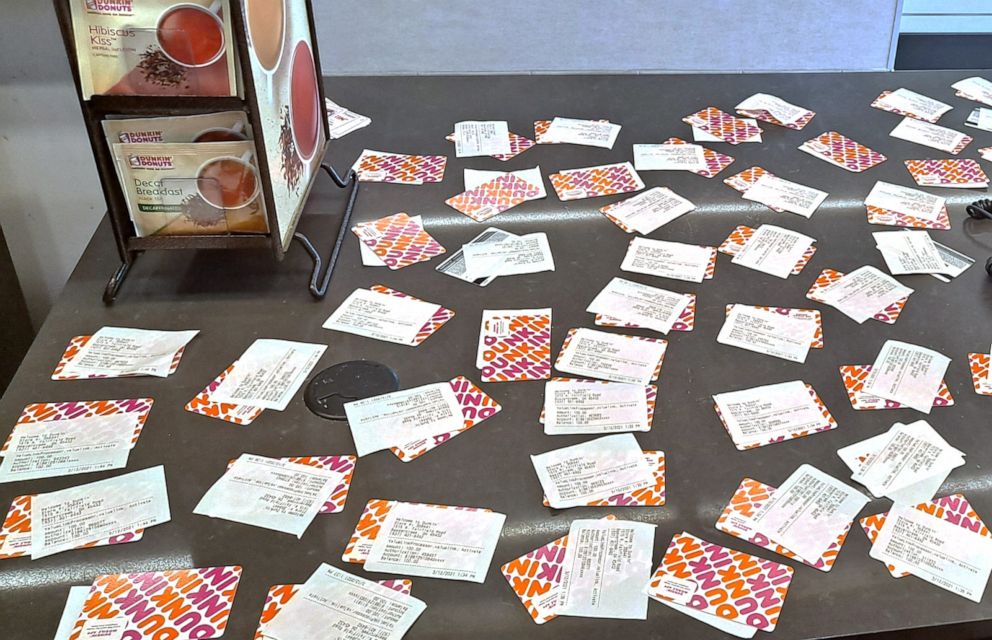 Samantha Owens
A customer at an Ohio Dunkin' location pays for $4,000 worth of gift cards to pay for future customers' orders.
MORE: Krispy Kreme will give vaccinated customers a free glazed doughnut through 2021

"We were waiting, and they were like, 'You know what, let's just make it $4,000 -- it's been a really rough year for everybody,'" Owens told "Good Morning America." "They wanted to pay it forward in any way they could."

The 40 gift cards were then divided up, with 20 being used for the next drive-thru customers and the other half for in-store orders. They lasted from Friday night until the following morning.

MORE: Over 900 cars participate in pay-it-forward at Dairy Queen drive-thru

"A lot of people were ecstatic and surprised," she said. "They were like, 'Are you sure?' And then we had the issue where they were trying to pay for the car behind them, and we were like, 'Theirs is taken care of too.'"

Owens described the typical atmosphere at the shop as pleasant and friendly -- people often pay for the customer behind them -- but nothing of this scale had ever happened. Each employee also walked away with as much as $15 in tips -- way more than normal.

"I was just so happy that he chose this location, honestly, for something great like this to happen, because we love our regulars and we love our customers," Owens said. "Being able to make them happy really makes a difference in our mood at the store."