Grammy-nominated hip-hop artist Gunna grew up outside of Atlanta as one of five sons raised by a single mom, who was a school cafeteria worker.

He spent his middle school years at Ronald E. McNair Middle School, a school of around 900 students in College Park, Georgia, that is designated as a Title 1, or high-poverty, middle school.

Last week Gunna, 28, returned to the middle school to open what he hopes will be a lasting legacy, a free grocery store inside the school.

"It’s everything I wanted," Gunna said as he surprised students and attended the store's grand opening. "I’m going to continue to keep giving back."

The store, named Gunna’s Drip Closet and Goodr Grocery Store, features not only food but also clothing, toiletries and household supplies, all available to the school's families for free.

It is the result of a partnership between Gunna and Goodr, an Atlanta-based start-up that works to eliminate hunger and food waste.

Goodr's founder, Jasmine Crowe, said Gunna approached the start-up with the desire to build something in his former middle school and the grocery store was born. 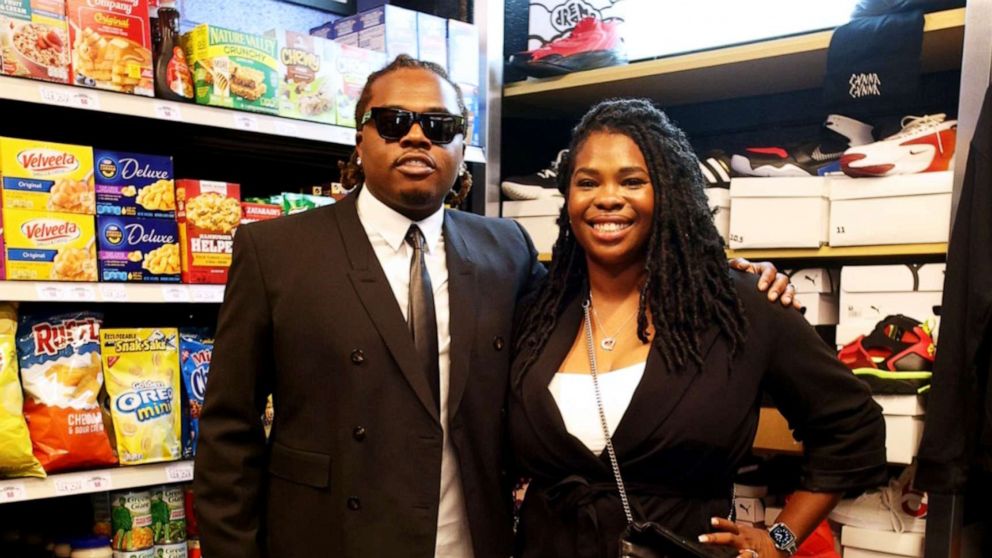 "Millions of kids depend on the free breakfast and lunch that they're provided at school, but then they go home and oftentimes they don't have access to the same thing as they're getting in school, until now," Crowe told "Good Morning America." "I really want to give these kids a chance to be their full selves and to not have to worry about something as simple, that I think should be human right for everybody, as just being able to eat."

Crowe went viral last week when she shared a first look at the in-school grocery store, the first-of-its-kind from Goodr, which builds pop-up grocery stores in food deserts.

Today we opened our first ever FREE in-school @TheGoodrCo grocery school in College Park, GA. Thanks to Hip-Hop Star @1GunnaGunna this store, built in his former middle school will serve 900 students and their families for years to come.... #DoGoodr pic.twitter.com/7WPvls2vFI

The store at McNair Middle School contains fresh produce and options for different diets, including vegan, as well as packaged foods, canned vegetables and frozen foods that kids can make on their own, which Crowe said was a priority.

"You have to meet kids where they are," she said. "We have children that are going to be preparing the food, so it had to be things that not only children and youth want, but also things that they could easily make."

"A lot of these kids are adults outside of the school. They are taking care of their younger brother and sisters. They're running households. Their parents can be working two jobs," Crowe added. "You have no idea the situations that a lot of these children are facing, and now we are helping them really take control of their lives."

Students, their families and teachers at McNair Middle School can all shop for free. The store is funded through this school year and next, according to Crowe, whose team at Goodr will keep the store restocked. 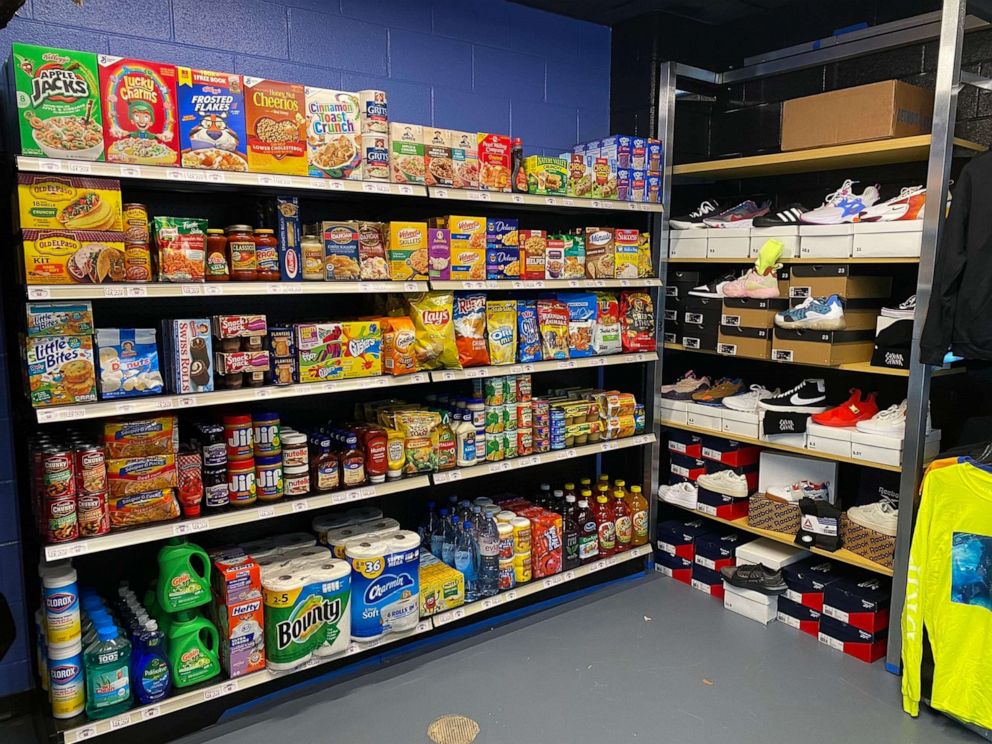 The variety of options now available for free will be a life-changing opportunity for students and their families, according to John T. Madden Jr., principal of McNair Middle School.

"I'm still on a high about it, and just can't wait for our families to really start taking advantage of the store," he said. "It's like you walk into Walmart, and you just have everything there for you."

We provided all 900 students in the school with reusable @1GunnaGunna x @TheGoodrCo grocery bags filled with hoodies and t-shirts. The bags also create an equal playing field when kids go shopping in our store for items - no one knows as each child received one to use anytime. pic.twitter.com/EAL25XDK7i

All students at the middle school are eligible for free breakfast and lunch, according to Madden, who described the neighborhood surrounding the school as high-poverty and high-crime.

"At 12 or 13, they've seen a lot that we've seen never seen in our lifetimes, and they have adult roles when they're outside of school," said Madden. "That's a battle that we fight." 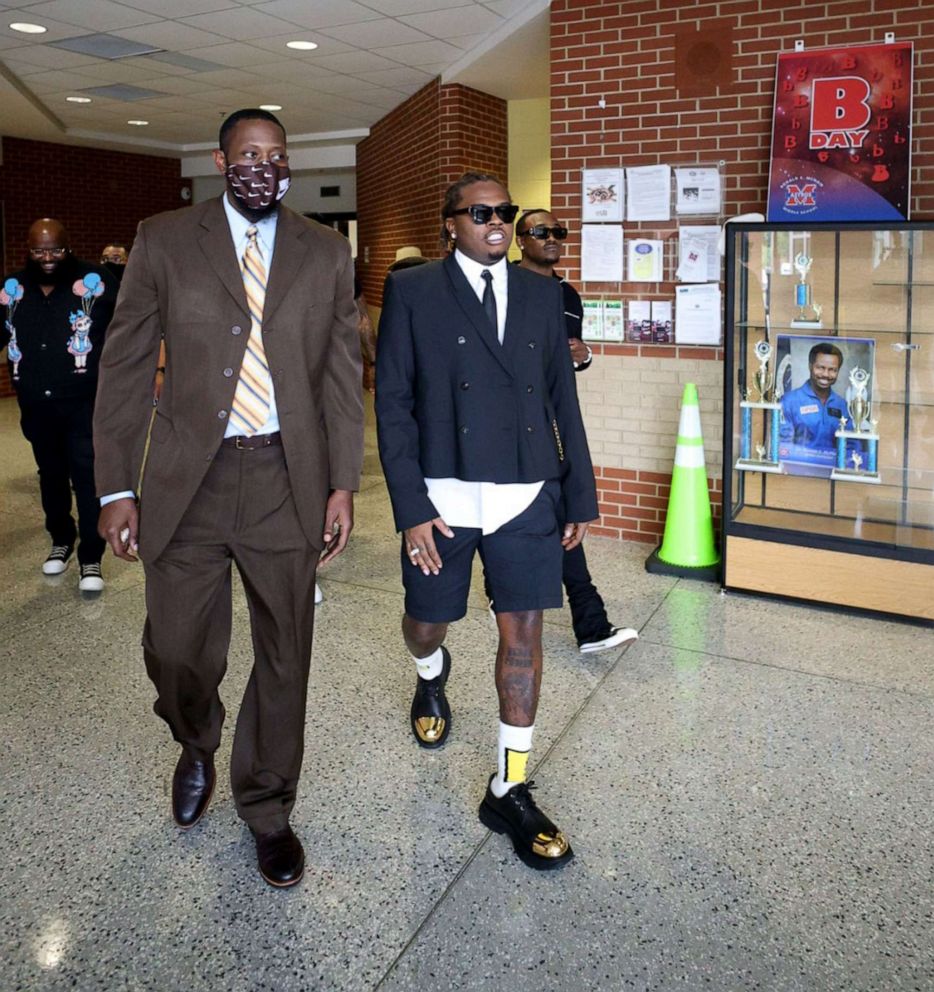 Madden described trying to reach students as like "peeling an onion," as students face issues of poverty, crime and hunger at home.

"We have to peel all those layers before we can get them to sit down and actually listen to instruction," he said. "I tell our teachers all the time, 'We have to do more than just teach our children.'

When Gunna visited his former middle school last week, he delivered a message to McNair students to "stay focused" on school. 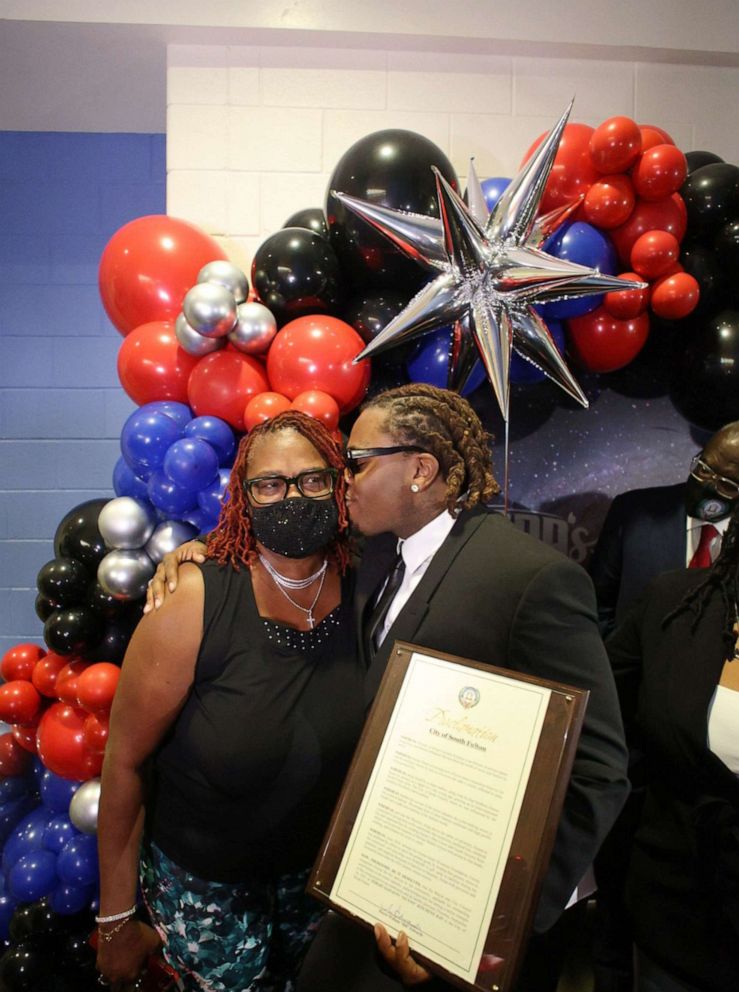 Crowe -- who is publishing a children's book, "Everybody Eats," in October with the proceeds doing to fight childhood hunger -- said her hope is that the free grocery store at McNair Middle School takes away one distraction from students so that they can keep their focus on school.

Her dream is to open free grocery stores in schools across the country. In the U.S., more than 30 million children participate in the free and reduced-lunch program, according to the U.S. Department of Agriculture (USDA).

"There are a lot of people that work on minimum wage, they just can't make ends meet and are always having to make critical decisions [like], 'Am I going to pay for my power bill this month? Or am I going to pay for them to have access to food?'" said Crowe. "Those are the decisions that a lot of families make, and we've got to be able to help meet them."