LinkedIn, the career-focused social networking site, will soon allow parents to add "stay-at-home mom" and "stay-at-home dad" titles to their résumés and have more options to describe gaps in their careers due to parenting.

"This was absolutely based on member feedback," Catherine Fisher, a career expert at LinkedIn, told "Good Morning America." "It's also really part of our ongoing efforts to make a more inclusive experience for everyone."

"We want people to be able to still thrive in their careers [as parents] and this allows for that more inclusive experience for everyone," she said.

The new effort by LinkedIn comes as women continue to leave or be forced out of the workforce during the coronavirus pandemic. More than 2 million women have left the labor force since February, meaning they are neither working nor looking for work, according to the National Women's Law Center, a policy-focused organization that fights for gender justice.

MORE: More than 2 million women left the workforce in 2020. Why it matters and what happens next

Many more women will now have career gaps in their résumés because they left the workforce temporarily during the pandemic to care for children when day care centers closed and schools turned to remote learning, data shows.

LinkedIn
LinkedIn announced it will add options for parents to include "stay-at-home" titles to their resumes and add more details about career gaps.

During the pandemic, women ages 25 to 44 are almost three times as likely as men of the same age group to not be working due to child care demands, according to research from the U.S. Census Bureau and Federal Reserve.

One of the features that will be added to LinkedIn in the coming months will allow users to choose from options including "sabbatical," "personal leave" or "parental leave" to explain gaps in their resumes.

"One good thing about the pandemic is some of that stigma has gone away in terms of a gap," said Fisher. "But this is something that is really important to get right because it has affected so many people."

Other new features for working parents will include opportunities for them to highlight their skills, rather than focusing on their time in or out of the workforce, according to Fisher. Users will also be able to list a title without having to also list an employer or company. 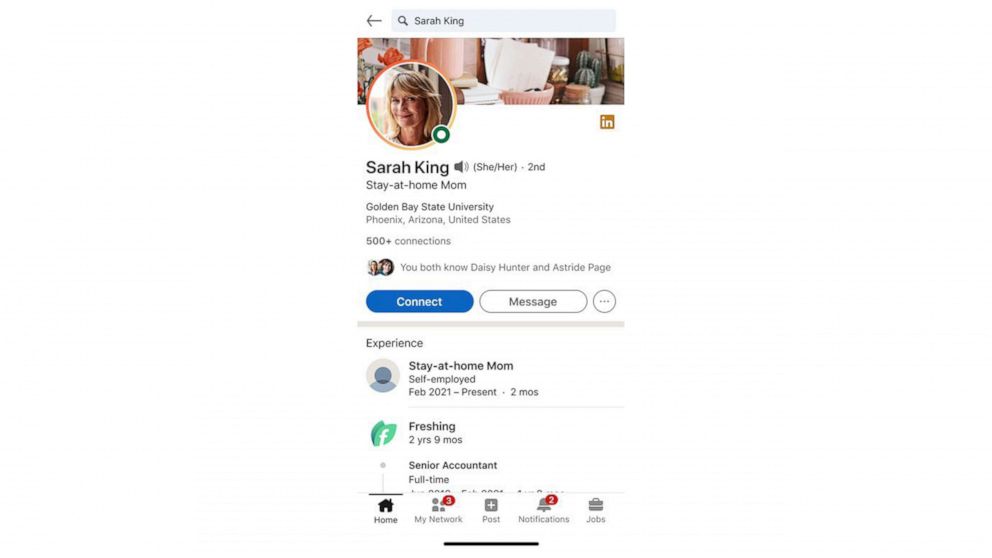 LinkedIn
LinkedIn announced it will add options for parents to include "stay-at-home" titles to their resumes and add more details about career gaps.

Research from LinkedIn shows that more than 60% of professionals have experienced a career gap at some point in their careers.

And while a majority of job seekers believe there is a stigma associated with having a career gap, 79% of hiring managers say they would hire a candidate with a career gap on their résumé, according to LinkedIn's research.

MORE: Mom reworks her resume to list all the skills she has as a mom, and the list is long

"What we are finding is that those skills are so incredibly important and you can acquire many of the skills that companies are looking for even if you don't have a traditional, 9 to 5 job," Fisher said. "As we're seeing companies focus on skills-based hiring, it really gives an opportunity to showcase your skills."

The new features will be rolled out by LinkedIn over the next several months, according to Fisher.

The changes were first reported by Fortune magazine, which asked LinkedIn for comment after a Medium post that called on the platform to expand their job title options.

LinkedIn also announced other changes this week, like the ability to feature a video cover story and an added field for users to add their gender pronouns to their profile.