For nearly two months during the coronavirus pandemic, Cheryl Meany, like moms across the U.S., has worn several hats.

She is a high school English teacher who is now trying to navigate her more than 100 students through virtual learning.

She has also become a teacher to her three daughters, a 9-year-old and 5-year-old twins, managing their Zoom meetings and learning how to become an elementary school teacher through trial-and-error. 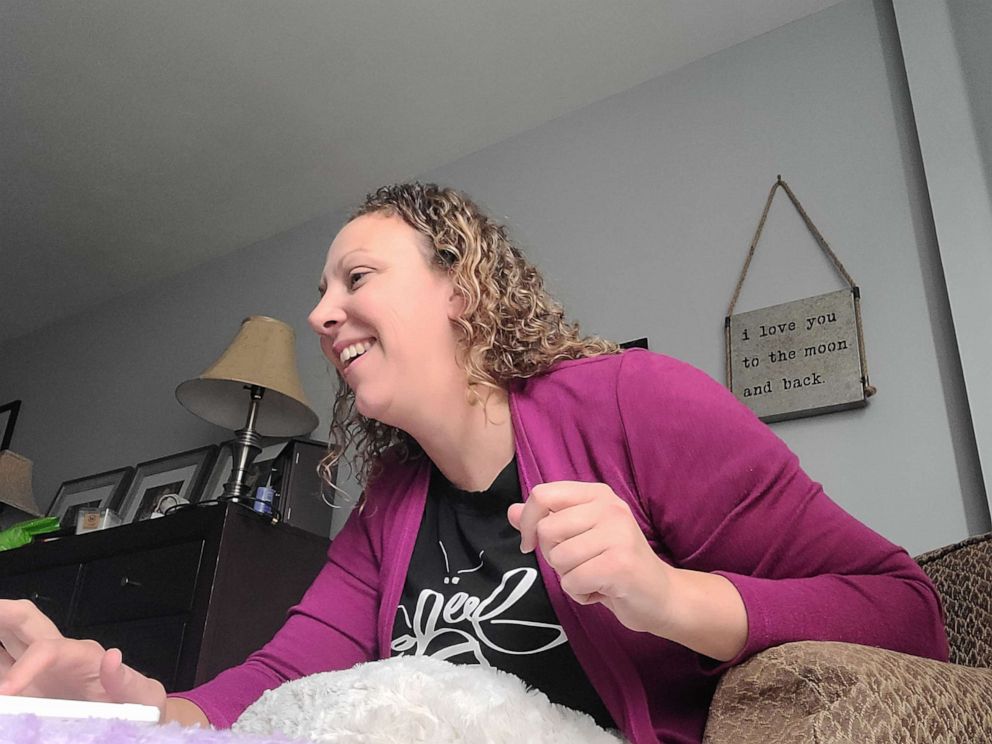 And Meany, 40, has become a single parent as her husband, Jason, lives apart from the family while working as a respiratory therapist at a hospital near their home outside Syracuse, New York.

"I can't promise that I'm not going to cry. I'm going to try not to," Meany told "Good Morning America" as she described her sudden new normal. "It's difficult."

Meany last taught in a classroom on March 16, the day schools in her area closed down to help stop the spread of COVID-19, the respiratory illness caused by the novel coronavirus.

Around that time, her husband's scuba store was also forced to close as a nonessential business and he decided to return to his former career as a respiratory therapist due to the critical need. Because he handles patients' ventilators and has close exposure to the virus, the Meanys decided that Jason would live with a friend near the hospital so that he would not risk exposing his wife and daughters and 65-year-old mother-in-law, who also lives with the family. 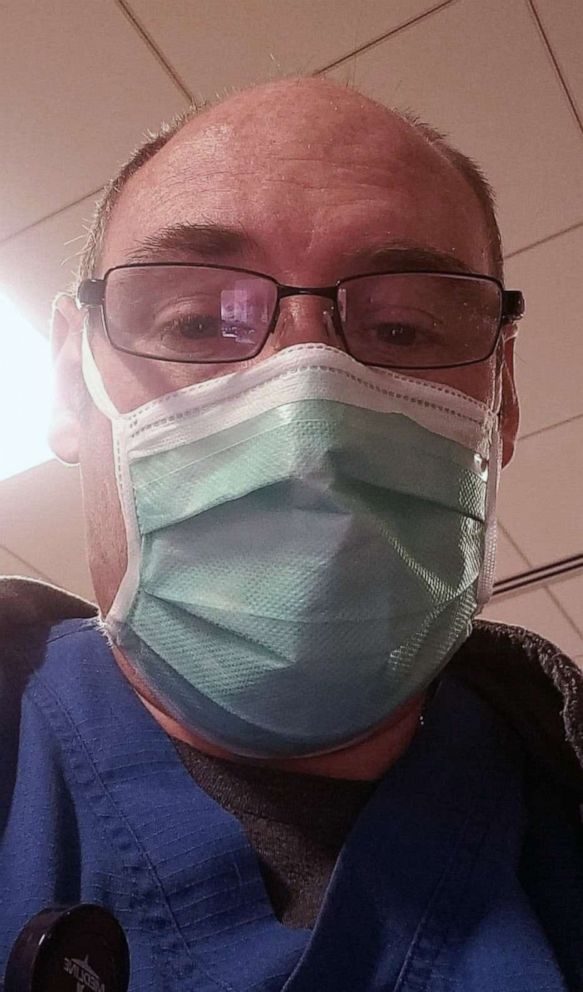 Cheryl Meany
Jason Meany is working as a respiratory therapist at St. Joseph's Health Hospital in Syracuse, N.Y., during the coronavirus pandemic.

In a matter of a few days, Meany became a solo parent and a virtual teacher to her own daughters and to her high school students.

Meany's day begins early in the morning when she wakes up before her daughters to get school work done and ends late at night, after she's worked some more once her daughters have gone to bed. In between is a flurry of her teaching classes and leading meetings online, making sure her daughters are present for their online classes, getting her kids to virtual occupational and physical therapy appointments, grading papers and making lesson plans for her students and more.

"I think that the speed and the severity with which everything happened makes it really difficult to wrap your mind around it," she said. "Our family calendar went from being full of all of the things that we were doing, all of the activities, to nothing, and then all of a sudden it's like, mom has a department meeting at this time and Stella has speech at this time, and it's full again but in a different way." 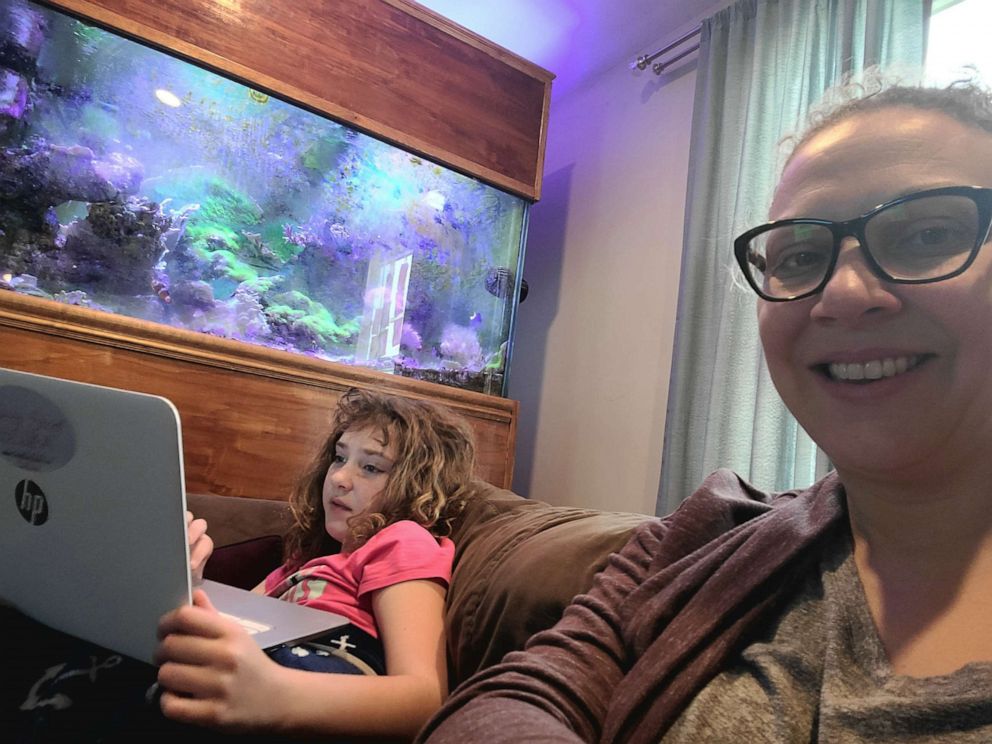 Cheryl Meany
Cheryl Meany works alongside her daughter at home during the coronavirus pandemic.

Meany and her daughters keep in touch with Jason through daily video calls and in-person visits as often as possible, following social distancing rules. Jason will often come by the house for breakfast after his night shift and sit on his car as his daughters and wife sit on the front porch, according to Meany. 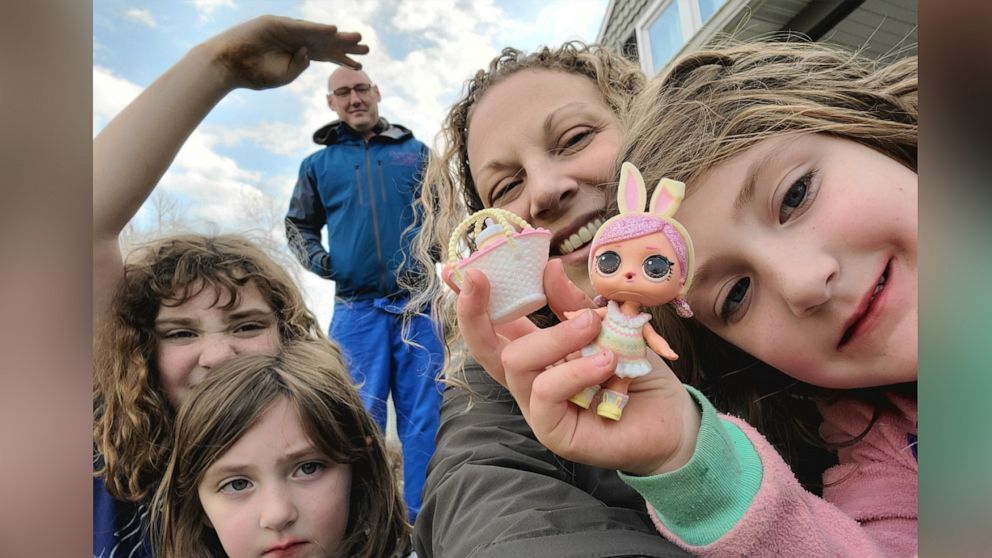 "We try really hard not to watch the news or talk about [coronavirus] a lot when they're around but my 9-year-old is pretty astute," said Meany. "She also understands that her dad is working at the hospital because of the virus ... and she's struggling a little bit more with the separation." 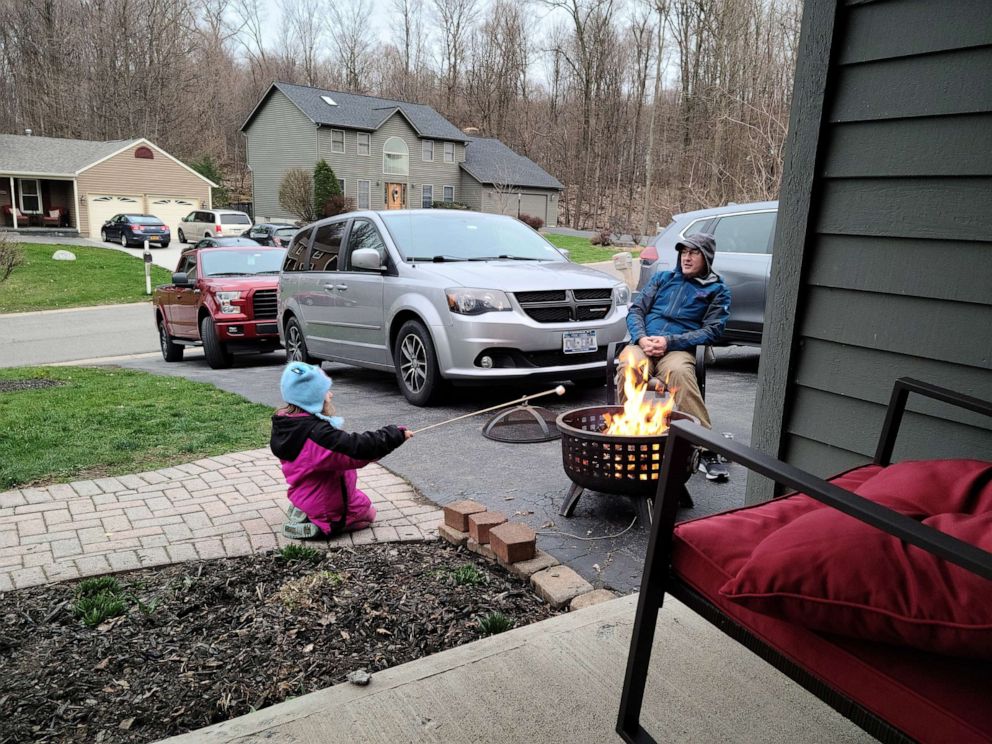 Cheryl Meany
Jason Meany talks with his daughter outside their home while maintaining social distancing.

'I'm constantly checking in with kids'

Meany, a teacher for nearly 20 years, has more than 100 sophomores through senior-grade students in her American literature and creative writing courses this semester.

MORE: This chemistry teacher turned his kitchen into a science lab

Meany has come up with creative ways to keep her students connected, like going on Instagram in costume to talk about books her students are reading, but she said she worries every day about how her students are doing at home, outside of the classroom.

I had to go into school this morning for some books. It was incredibly emotional to open the door to room 1402. I looked at Bob Ross and burst into tears. I miss you all so very much. On my way out, I grabbed the snappy alligator hat and it made me feel a smidge better. Sending hugs and love as I miss you all that much extra today❤️❤️

"The kids are struggling in terms of this whole new reality and not being in their routine, not seeing their friends every day and not getting up and going to school," she said. "I think that's the biggest struggle [for teachers], how do we stay connected with our students in a way that is meaningful and matters as much as our face to face time in the classroom does?"

"We are all missing our kids," she said of herself and her fellow teachers.

With the absence of commutes, activities and a social calendar to keep up with, Meany has rediscovered self-care, finding it in small and surprising ways.

"It's not always about going to the spa or this big picture of what self-care is supposed to look like," she said. "For me, it's getting up early ... doing stuff before my own kids get up and then we're able to have breakfast together before we kind of start our respective days."

"We also get to have dinner together every night, which I know I'm not sure that people would put that under self-care, but I do because that's a luxury that we did not have prior to all of this," she added.

Finding herself at home in the afternoon after school, Meany has started running with a friend who lives outside the state, doing daily runs at the same time, with their headphones in, connecting to each other via an app. She is also staying up later to do Zoom happy hours with friends and family members or watching something on TV or reading, things she did not have time to do when she had to be up early to commute to school.

Self-care and saying yes to what's important are two practices Meany says she plans to continue as life moves forward in this new normal. 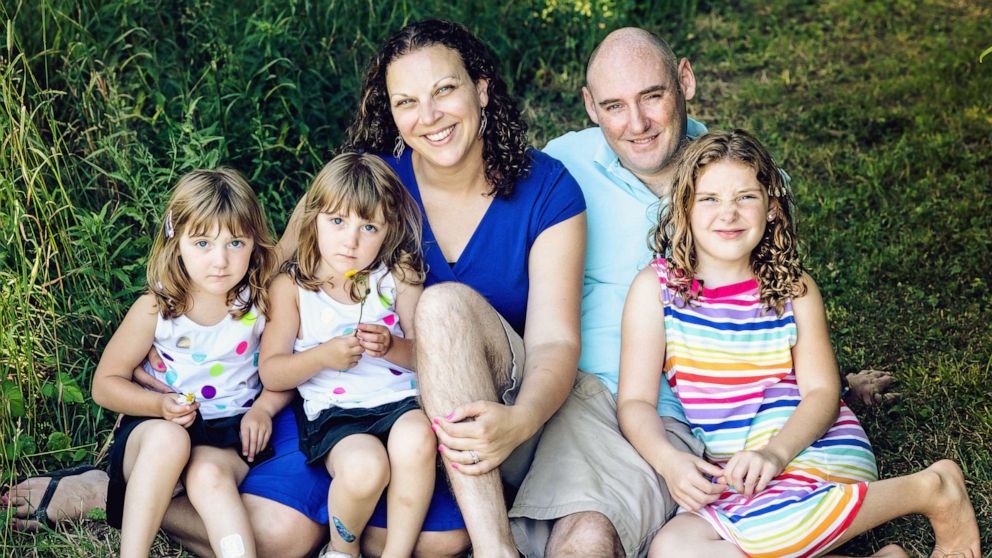