A South Dakota teacher is getting praise for going above and beyond to help a student with her math homework after schools switched to virtual learning because of the coronavirus pandemic.

Chris Waba, a sixth grade math teacher in Madison, South Dakota, said he had been emailing back and forth with a student to help her figure out a problem after a lesson he taught by Zoom earlier that day.

When the student, Rylee Anderson, 12, told him in an email that she was still struggling with the problem, Waba, a 27-year teaching veteran, grabbed a whiteboard he'd taken home with him from his classroom and walked to her front door. 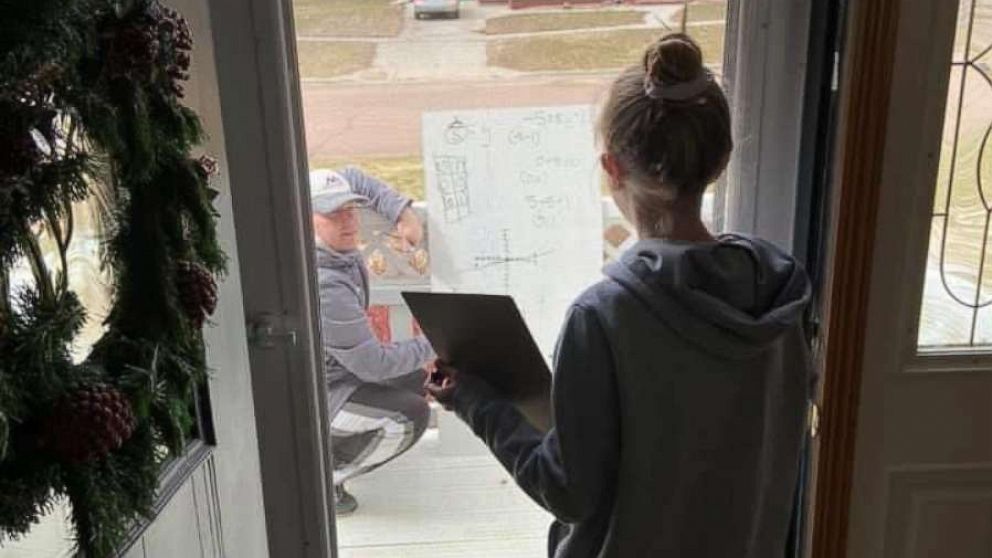 "We had really tried to work through it digitally, but you can just tell when you need to do something else," Waba told "Good Morning America." I had the whiteboard that I brought home, and I just said, 'I’ll be over in a couple of minutes.'"

Waba is a neighbor and very close friend of Rylee's family, so he only had to walk a few doors down to reach her. He spent about 15 minutes kneeling outside the front door and drawing on the whiteboard while Rylee stood safely inside.

The moment was captured on camera by Rylee's parents. Rylee's dad, Josh Anderson, the head football coach at Dakota State University, posted the photo on Twitter, where it quickly went viral.

My 6th grader emailed her math teacher for some help, so he came over & worked through the problem with her on our front porch. @Chriswaba9 , our neighbor, MMS teacher & MHS Wrestling Coach. #KidsFirst @MadisonMSNews @MarkOsports @dakotasportsnow @dakotanews_now @stwalter20 pic.twitter.com/aniqt2goPB

"He’s just a really good teacher and really good person," Anderson said. "[Rylee] was shocked he came over, but she was happy to get it done and over with because she was very frustrated to not have the answers or the help that she needed."

Schools in Madison switched to virtual learning nearly three weeks ago, according to Waba. He said the move has been an adjustment for teachers like himself as well as for students.

"When teachers go into the business, it’s because they like to teach and be around the kids," he said. "For us now to turn into a virtual classroom, probably the biggest love of what our job is about isn’t our job anymore. It’s not the same as being in the classroom and interacting with class."

MORE: The sadness is real: An open letter to teachers

Waba also stressed that there are teachers around the country going above and beyond for their students in this unprecedented time.

"I’m not one on an island," he said. "There are thousands and thousands of teachers going the extra mile for their kids."

Editor's note: This was originally published on April 1, 2020.