Marking Valentine's Day after the loss of a partner or spouse is undeniably difficult, so one North Carolina woman has stepped up to help.

Ashley Manning, a mom of four in Charlotte, and a team of volunteers will deliver flowers and gift bags to 400 widows across the city this Valentine's Day.

It's an effort that Manning, a pharmaceutical sales rep turned stay-at-home mom, began last year, shortly after she turned her hobby of flower arranging into a business in late 2020.

"When I started Pretty Things by A.E. Manning, I started thinking about Valentine's Day," Manning said, noting that for many years she had made Valentine's Day bouquets for her kids' teachers and family friends going through difficult times. "I thought, I have a platform now to maybe involve more people." 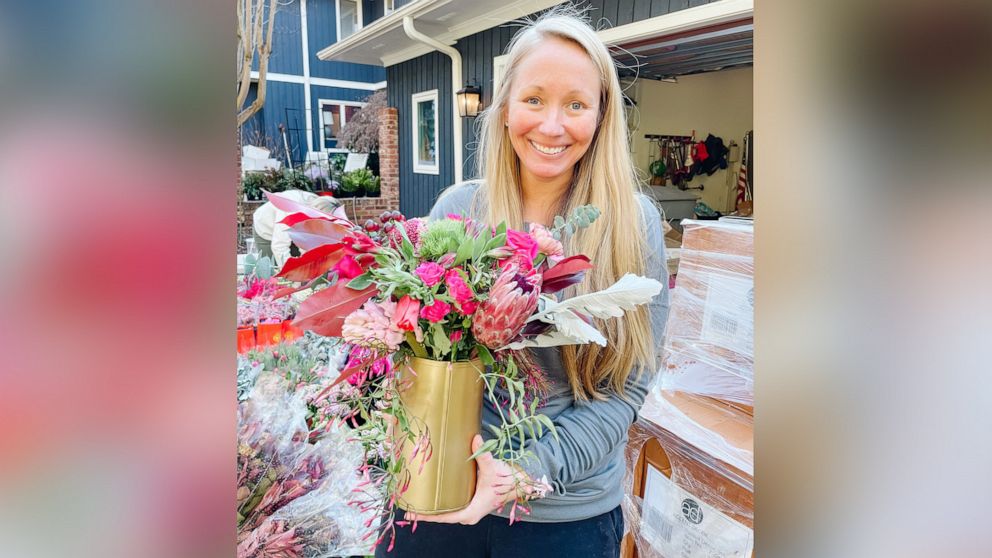 Ashley Manning
Ashley Manning holds a flower arrangement that will be donated to a widow in Charlotte, North Carolina, on Feb. 14, 2022.

Last year, Manning shared on Instagram her idea to give flowers to women who wouldn't be receiving any on Valentine's Day from their late partner or spouse.

Within hours of her post, according to Manning, she had received hundreds of dollars in donations and the names of dozens of women who had been nominated by others.

Thanks go Manning's efforts, on Valentine's Day last year, 121 women and two men opened their doors to surprise floral arrangements and a gift bag with a note that included the lyrics, "There's never been a moment you were forgotten," from the song "Rescue" by Lauren Daigle.

One of those women was Jordan Meggs, who was marking her first Valentine's Day without her husband, Daniel, who died of colon cancer at age 29 on Feb. 21, 2020, when Meggs was 37 weeks pregnant with their first child.

"I wasn’t expecting it, and I was shocked and so surprised by such a sweet thing," Meggs said of the flowers and gift bag. "Before, I never thought of what widows are doing on Valentine’s Day, but it’s just in Ashley to think of others all the time. It’s just who she is." 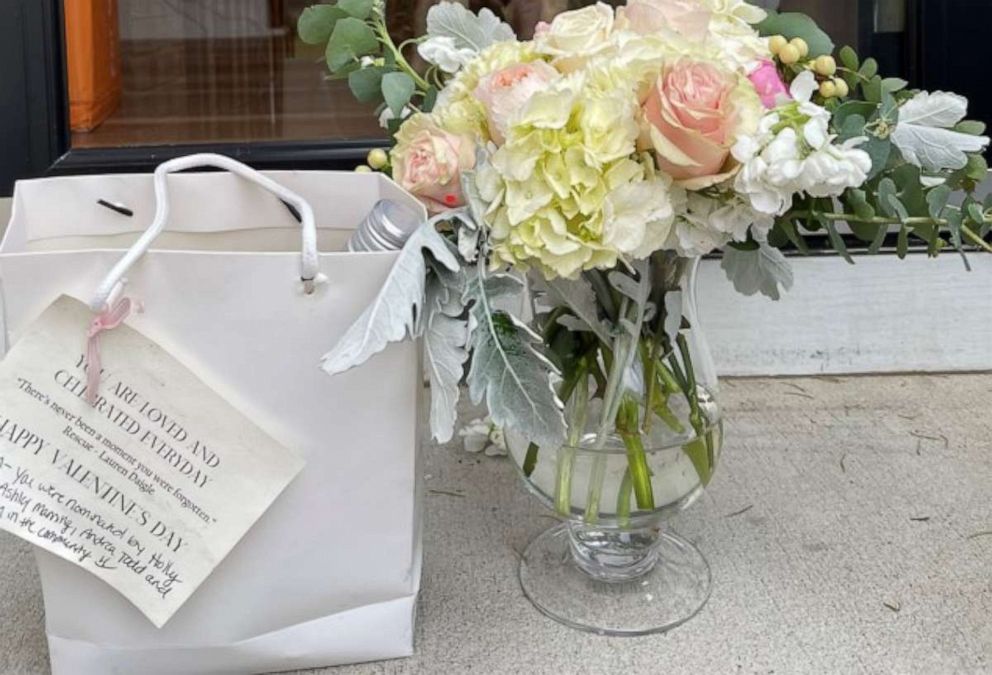 Jordan Meggs
Jordan Meggs was surprised with a Valentine's Day arrangement from Ashley Manning on Feb. 14, 2021.

For this year's effort, Manning raised over $22,000 and oversaw 300 volunteers who assembled over 13,000 stems of flowers into floral arrangements for 400 widows.

In addition to the flowers, the women will also receive a gift bag with wine and gifts and gift cards from local businesses who have donated their goods, according to Manning.

"It just kind of snowballed, but it's a neat thing to see a good thing snowball," said Manning, who oversaw the effort this year while recovering from a debilitating eye injury that left her with vision loss in one eye. "They say misery loves company, but I think happiness loves company, too."

This year, among the volunteers who came to Manning's home to assemble the flowers and gift baskets were several women, including Meggs, who received flowers last year.

And this year, one of the arrangements and gift bags will go to Meggs's mother-in-law, whose husband died unexpectedly last year.

"She’ll be totally shocked, and I’m sure it’ll make her happy and make her smile," Meggs said. "Like my husband, my mother-in-law loves Valentine’s Day. She instilled that in my husband, and that’s why he made it so special for me throughout the years."

Manning said she is in the process of turning the project, which she calls the Valentine's Day Widow Project, into a nonprofit organization, so she can continue to expand and reach more women.

She said she has received countless messages of thanks from the women who received flowers, and she has been overjoyed to see family and friends start similar efforts on whatever scale they could, like her sister who gave Valentine's Day flowers to widows at her gym.

Ashley Manning
Ashley Manning hugs a recipient of one of her Valentine's Day floral arrangements on Feb. 14, 2021.

"The most important thing that I've learned through this whole outreach is that when you feel that tug on your heart for whatever it is, because this world is full of things that are sad and hard and there are people that are aching every day, when you feel that nudge, actually listen to it," Manning said. "Whether it's widows or widowers or if it's military spouses, or whatever it is that tugs at your heart, you just listen to it and act on it, and the reward is far greater."

"The joy that giving gives your heart is just incredible," she said.