By Joel Lyons
Video by Will Linendoll
Share —
Sign up for our newsletters to get GMA delivered to your inbox every morning!

One-third of adults age 30 or younger have student loan debt, with the median burden hovering at $17,000. In Debt Diaries, we introduce you to those who took on their debt and came away with a better understanding of themselves. Their testimonials offer hope -- and tools -- to show that you, too, can overcome debt.

Cari Swanger is a clinical pharmacist in Seattle. She and her husband, Tom, recently celebrated paying off her $180,000 in student loans in three years utilizing tools she accessed through online finance company SoFi. 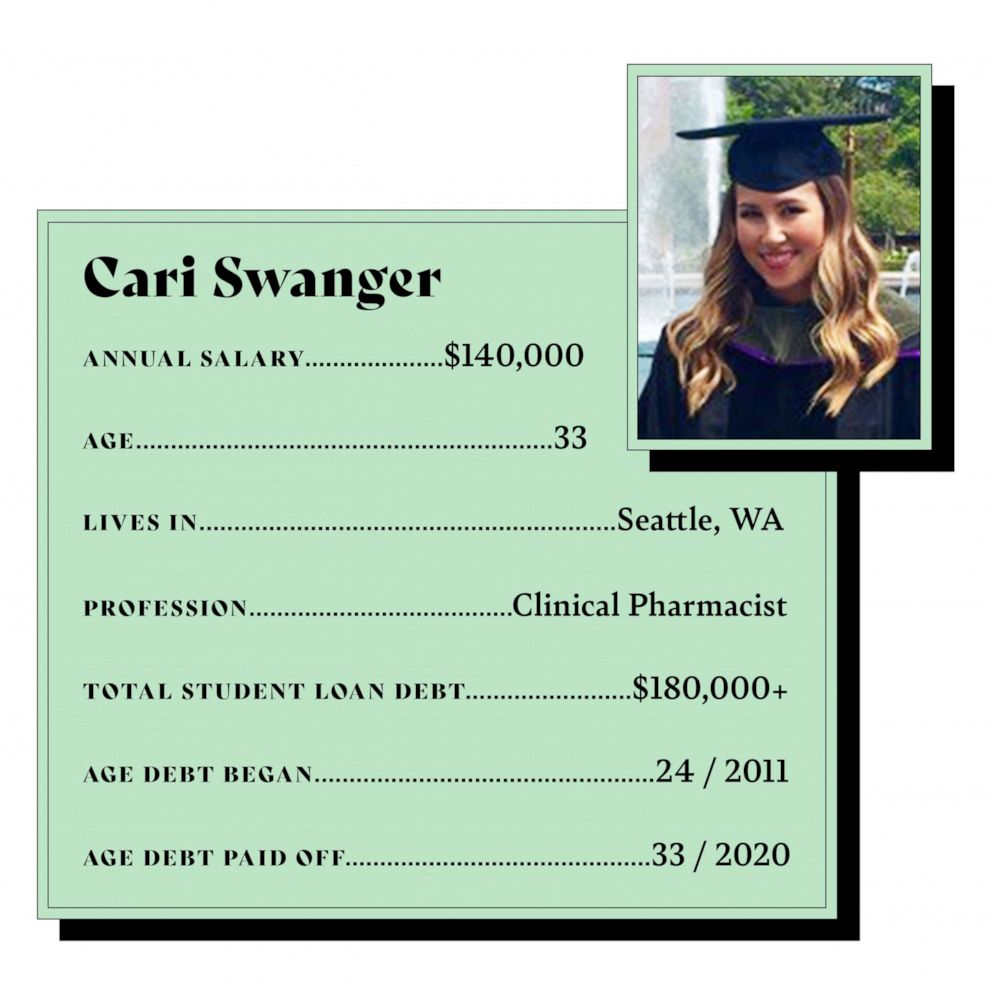 I started taking out student loans and just continued through the end of pharmacy school. That was about four years, but the total, $180,000, ended up being a lot more with the interest rate from when I took them out, which was about 6.5% to 7%.

MORE: One woman weathers a career change and upside-down car loan to pay off $133,000 in debt

I had gone to community college in Seattle for my first two years and then I transferred as a junior with the prerequisites to get into college, and it was a lot cheaper. I graduated with a bachelor's in biochemistry and didn't take out any loans for undergraduate. I worked as a clerk in a retail store in downtown Seattle and I think tuition at the time was maybe $3,000 or $4,000 per quarter, so it was doable with a side job. 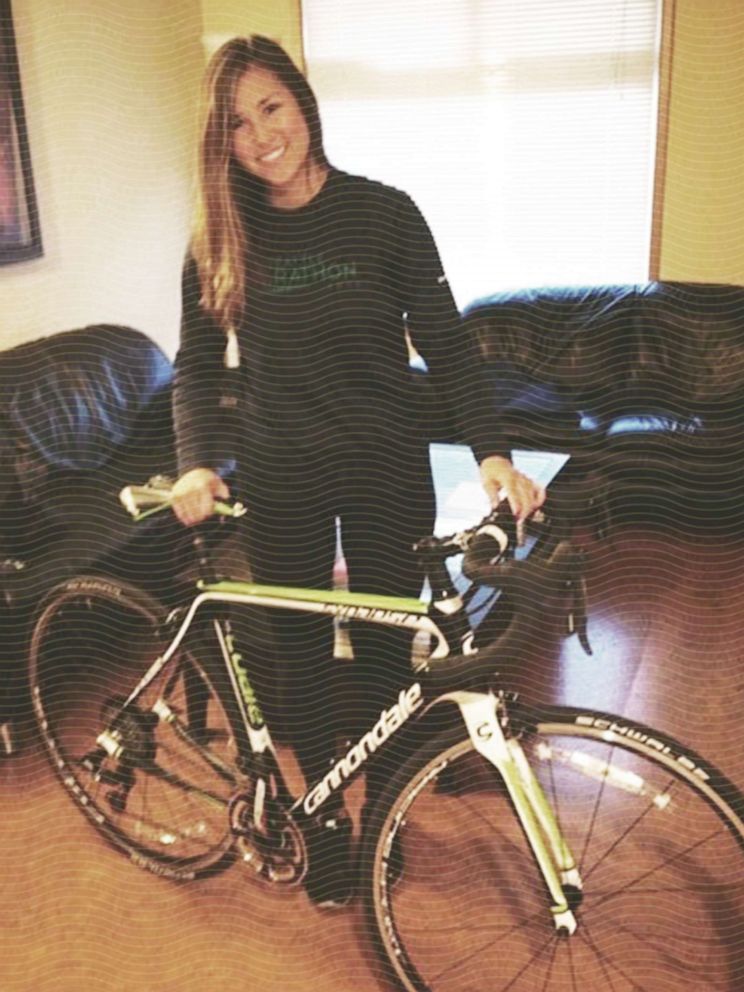 Once I started pharmacy school, the tuition was just a lot more expensive -- $26,000 a year. The reason why I took out student debt was because I was living in a townhouse and sharing rent with my brother in Seattle. The rent wasn't high, but I felt like I wouldn't be able to pay it with just my retail job or just from working as a pharmacy intern. I needed to have some leverage and have some money to spend on groceries and rent. I felt like I would be able to pay this off in the future, so I took out a 10-year loan.

I took out more loans than I needed because a lot of my friends' parents paid for their tuition or they had a nice scholarship. I wanted to be able to have fun with them and go do fun things on the weekends, like go to a concert or go buy that nice purse, so I took out more money than I should have.

I ended up using a lot of those loans to travel back and forth to see friends on the East Coast. And that added up. I think I went out to the East Coast probably four or five times. Thinking back on that, I definitely should have put my money toward savings or toward tuition and not taken out extra.

I deferred throughout my whole year of residency and didn't pay off any loans, but interest was still racking up. I saw that my principal and interest after I finished residency was $162,000. I looked at my billing statement each month and the interest alone was $900. I felt like my minimum monthly payment, which was only a little bit over $900, was just going nowhere. My debt was staying stagnant.

Deferring was another mistake that I made. A tiny little rental in Kentucky was about $1,200 for a one-bedroom apartment, and I just felt like $900 interest is almost the same as my rent and that was crazy to me to see. 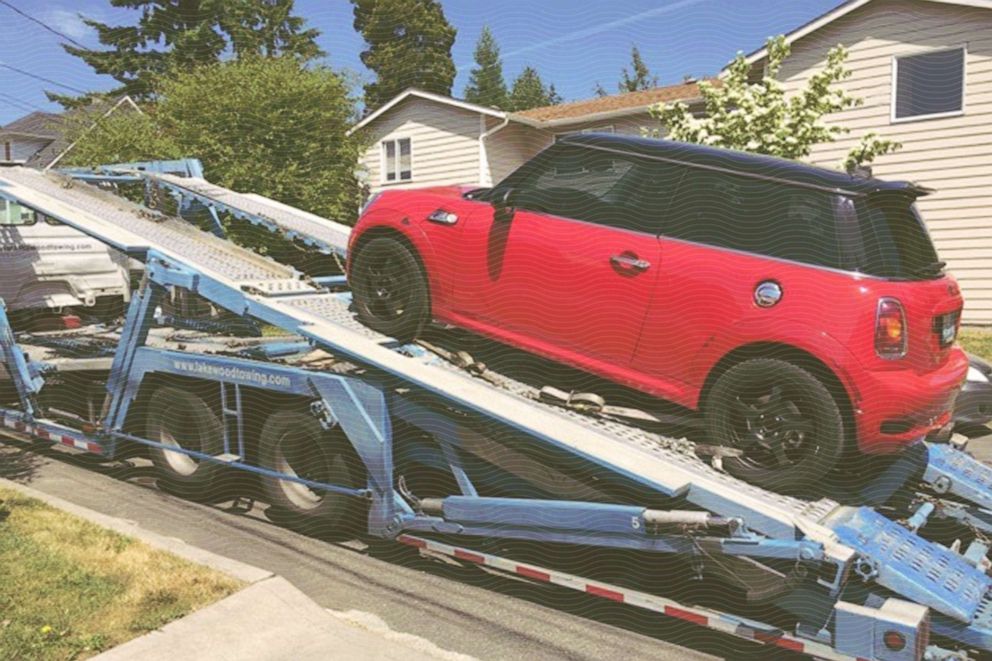 I felt like there was a ton of weight on my shoulders. I felt so stressed all the time. I didn't really talk to many people about it just because talking about finances seemed scary. That is something that I regret. I feel like there are other people out there that you can share your experience with and that would have helped me in the long run.

MORE: This couple went from RV to homeowners after paying off $130K in debt together

I felt like I wouldn't ever be able to pay this off and this would just be kind of looming over me over the next 10 years, so I was just kind of horrified to see that number.

I was so stressed looking at that $900 interest rate on my monthly bill each month. I had three loans and was using the avalanche method by paying to the highest loan before tackling the next one.

But I researched SoFi and found that a lot of people had refinanced with them, as well got a lower interest rate and decreased their total loan payments. I refinanced and consolidated to two loans, and lowered my interest rate from about 6% to 4%, which dramatically reduced my total amount of loan spending. I refinanced about six or seven times, which might seem crazy, but it did really help in the long run. I think my last few months of paying, it was down to about 1% interest. 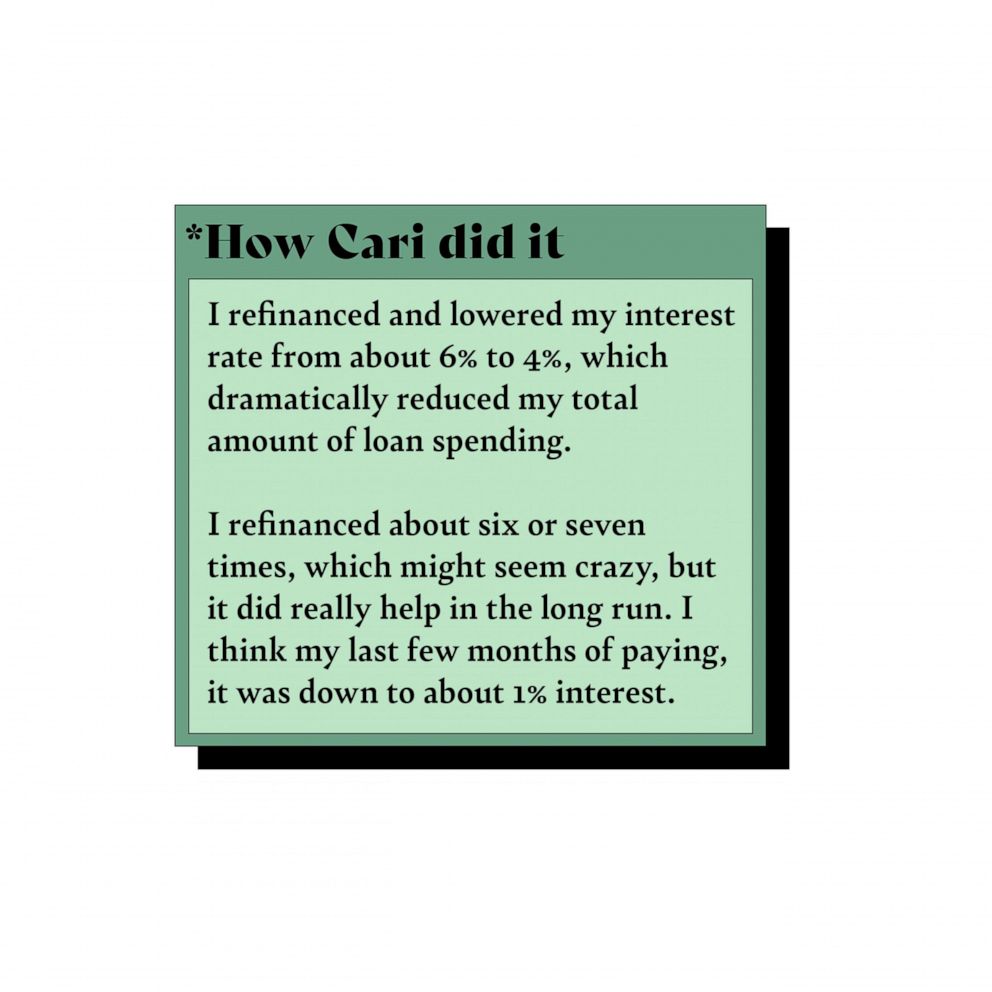 ABC Photo Illustration
How Cari did it

It took a little while before it was finally reflected in my account, but then I was actually seeing a lot less interest tacked onto my monthly statements. It was down from $900 to $600, then it was down to $500, but I was paying the same amount or more toward the loan each month. And each time I would refinance, depending on how much I was able to contribute, I was able to put more toward my loans. Originally, it was going from a minimum monthly payment of about $1,000 and then gradually went up to $5,000, and at some point, I was paying $7,000 toward the loan each month toward the last year of payments, which was helped because my husband was able to take care of our other bills. 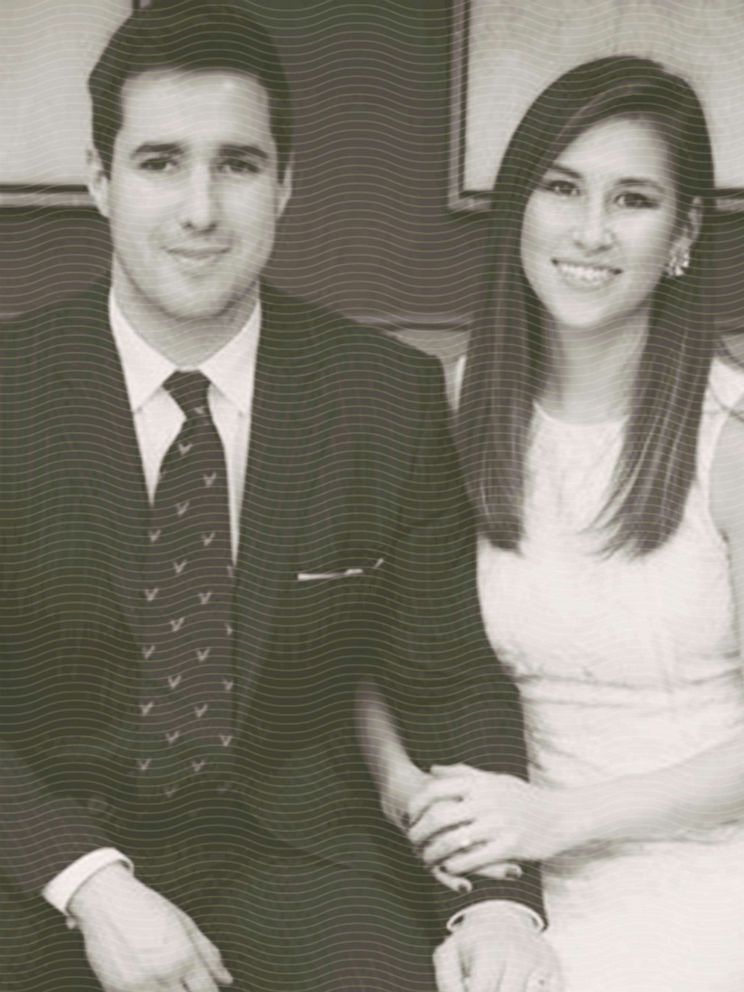 Since I had student loan debt coming into the relationship (he had no debt), we discussed how we would prioritize finances to make sure we were both on the same page. At first, I was a little hesitant to discuss the total amount of pharmacy school debt that I had, but the only way to tackle student debt was to communicate with each other as early as possible. We sat down and looked at each of my student loans, and decided to consolidate them through SoFi, and we constantly had conversations about the best way we could help each other pay off the debt.

We determined it would be best to focus my paycheck on student loan payments, and my husband’s paycheck helped pay the rent, water, gas, mobile data, Spotify, Netflix, and the majority of food and travel expenses. That way, we knew where each of our inputs and outputs were going, and we could track our spending easily.

When we thought about getting engaged, we talked about it and we decided that because I had a Chase Sapphire Reserve card that we would put the engagement ring on it to capitalize on the points. I didn't know when it was going to arrive or anything, so that was kind of a surprise when we finally got engaged. But it's just things like that where if there's any way to be smart about your money and have those open conversations, it's nothing to feel guilty about. We were able to use those points later to pay part of our trip to Yosemite. 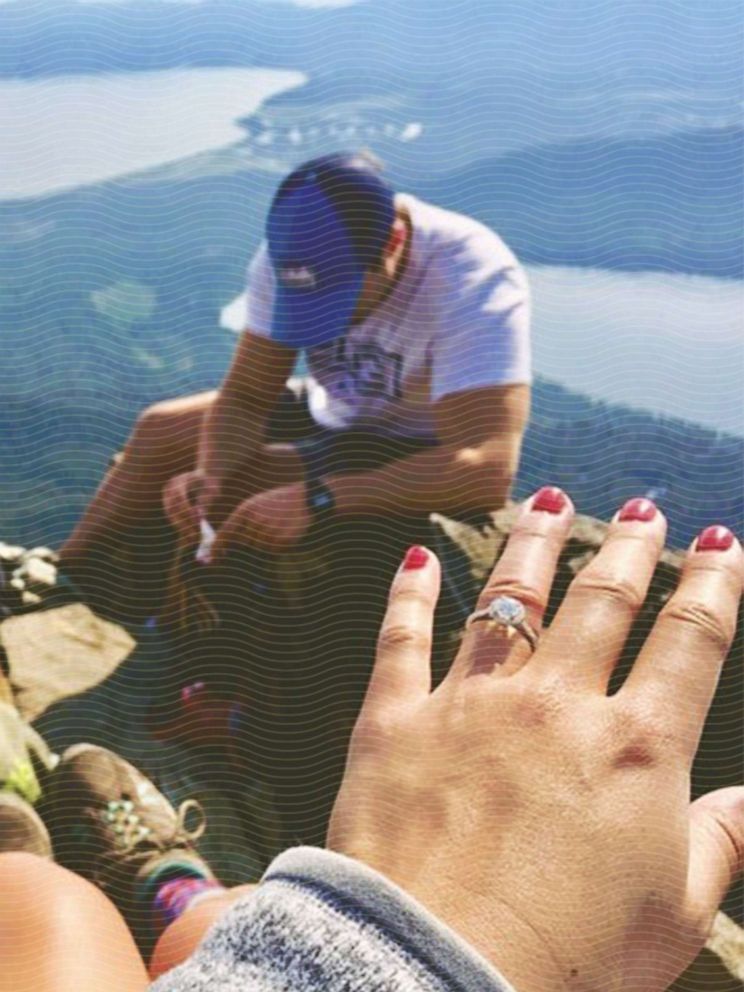 My husband and I like to refurbish things, such as coffee tables or desks or even just make things look a lot nicer than what they look like now, and just advertise that on Facebook Marketplace. There's a whole community out there that loves to be able to buy secondhand things and we've been able to make about $4,000 to $5,000 per year. We also buy everything that we can on Facebook Marketplace, so anytime we're looking for furniture or electronics, anything for the kitchen, we always buy secondhand. Why not buy secondhand when you're saving a ton of money and you can save a lot of money compared to buying brand new?

Also, anything that I would be able to save from budget -- cutting my spending on monthly subscriptions or Facebook Marketplace earnings -- would go toward the loans. Anything that I could generate during the time was going toward it.

Once I made the last payment after 33 months, I posted on the SoFi Facebook group just because that's my community. This was in the middle of the pandemic, so we can't go out to a nice restaurant or anything, but we ended up buying a tomahawk steak, grilled that, and had a really nice dinner and kind of put our feet up and just celebrated.

We are doing some of the same things that we did during our debt journey, such as looking into our finances and having those daily conversations with each other. I call them "money dates," where my husband and I would always just talk about what we learned that day about finance markets or what kind of investments are out there or what kind of high-interest savings account could we look into -- just anything that we learn, we share that with each other just to learn new things. 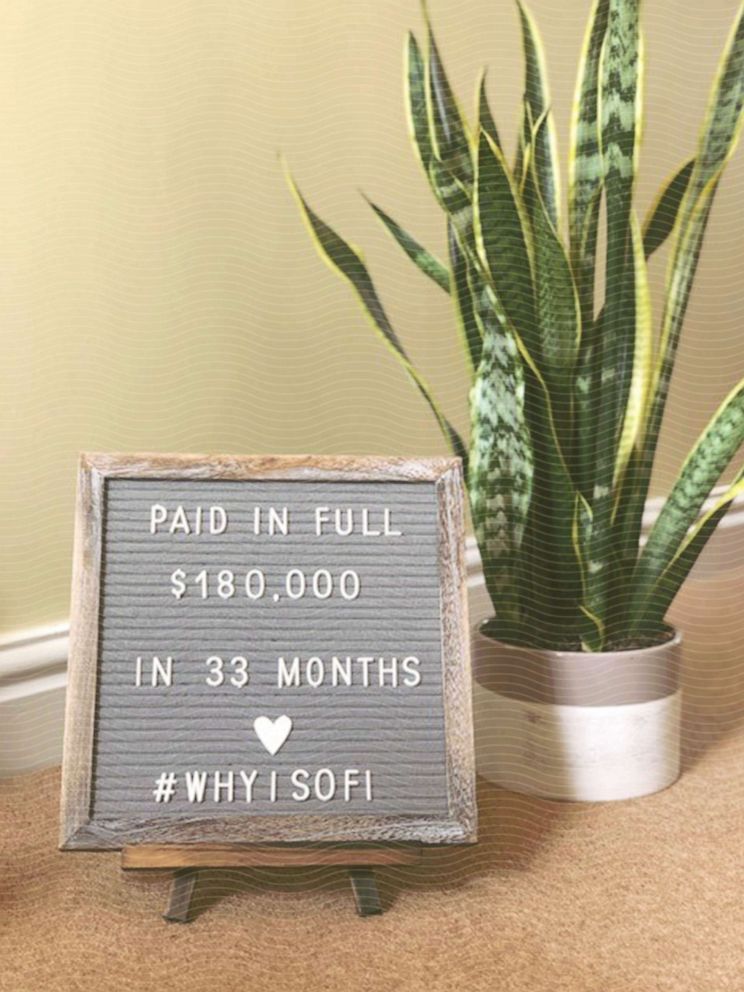 Courtesy Cari Swanger
Cari Swanger's Paid-in-Full photo, which she shared with the SoFi community after paying down her debt.

Some things that we have changed is being able to look at what milestones we can finally afford. This would be looking into a first home that we're finally able to afford because we could never think of adding on a mortgage when we had that student debt. And now we're able to look into starting a family in the near future and getting a dog or two as well. I think those are the things that we're thinking about in the long term.

MORE: Debt Diaries: She paid off a $102K student loan and bought a house in the same month

It took us a little while after finally paying off that final loan to realize we actually have something in our bank account now. It was kind of weird to rethink, but exciting because throughout our debt journey, we would always look at houses on Zillow. Or we would just say this is the kind of dog that I want, what do you think of this dog? What should we name our dogs or what? Like, we would talk about the future. It's kind of overwhelming to think about when we first paid it off, but it's finally settling in and we're excited to kind of take these next steps.

The biggest advice I can provide to others is to think of loans as a sprint and not a marathon. And reward yourself when you reach milestones, like going out to a movie or making a nice dinner -- just little things to celebrate these small achievements because it is amazing to be able to pay off when it might seem overwhelming.

MORE: How newlyweds paid off over $76K in debt in less than 1 year

I would also suggest using the financial tools that are out there, like SoFi or anything finance related. It's little articles that you can read on your lunch break or when you first wake up, track all of your finances, podcasts or sites that can even provide your credit score -- just utilize the resources to understand and know where your money is going. 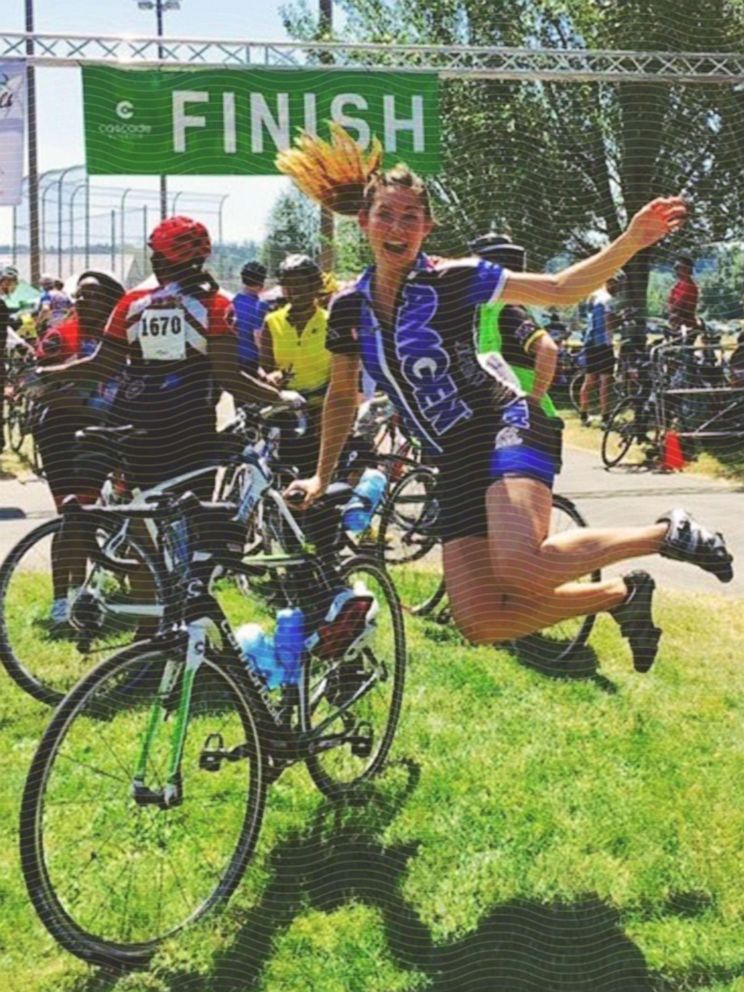 Also, is there any way that you can cut some of the monthly subscriptions out to save a little bit more money -- things like that just to get you closer to financial independence.

Really change the way you look at your loan payments and really rethink where you're spending your money.