As protests continue to erupt across the country following the death of George Floyd, Jide James Zeitlin, the chairman and CEO of Tapestry Inc., the parent company of Kate Spade, Coach and Stuart Weitzman, is speaking up against racial inequality and emphasizing that black lives matter.

In a moving post on LinkedIn, Zeitlin penned a letter to the company to talk about his own experiences of spending a summer in apartheid South Africa and the lessons he learned that summer, which have remained with him until now.

When Zeitlin was in his early twenties, he traveled to South Africa as part of a labor research group. He witnessed civil unrest in the country.

"I found myself in a church in Khayelitsha, a black township on the outskirts of Cape Town," Zeitlin shared. "What began as a political gathering quickly changed when the church was surrounded by armored vehicles, manned by teenage conscripts who in Afrikaans ordered us to break up. The orders, over bullhorns, turned into tear gas and eventually rubber bullets. The lessons learned that summer have remained with me for a lifetime."

Forward to 2020, and Zeitlin still sees injustice for black lives with the unrest happening across the country in response to the deaths of George Floyd, Ahmaud Arbery, Breonna Taylor and so many others.

"I sat down several times to write this letter, but stopped each time," Zeitlin wrote. "My eyes welling up with tears. This is personal."

In the past few days, Zeitlin shared that he's received countless reports regarding his stores across the U.S. including those in New York City, San Francisco and Washington, D.C., which have been destroyed by looters amid violent protests. 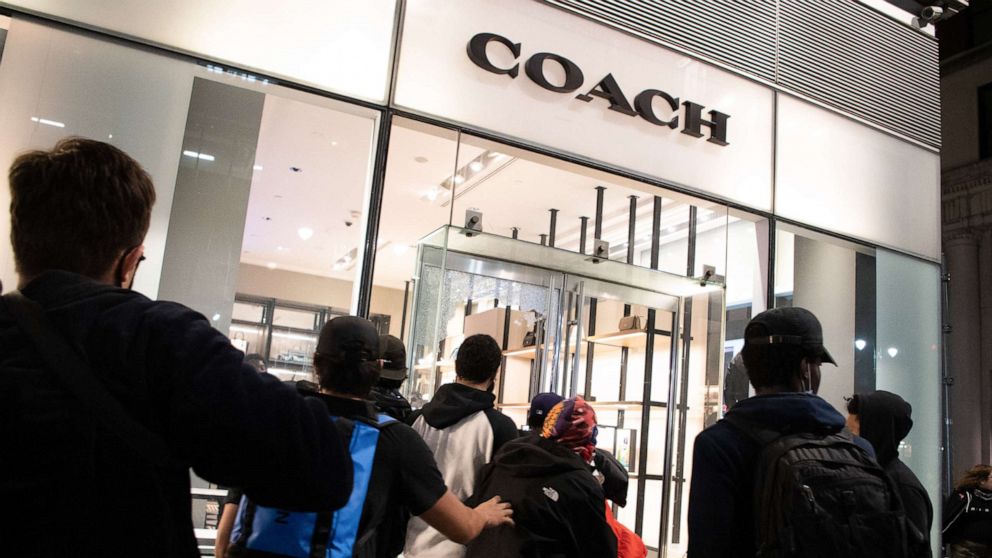 SOPA Images/LightRocket via Getty Images
A group of people looting a Coach store in Manhattans 5th avenue after an anti police brutality march, May 31, 2020.

While he reported that all of Tapestry's teams were safe, he told "Good Morning America" that he still acknowledges the fear and put the incident in perspective.

"I focus on the cause. What is it that was the underlying issue that caused people to step out into the streets and protest, to take the steps that they took?" said Zeitlin. "The losses that we suffered are minimal, relative to, frankly, the broader losses that society is suffering from and from the loss of life that so many families are suffering from, and that's what's key."

"We can replace our windows and handbags, but we cannot bring back George Floyd, Ahmaud Arbery, Breonna Taylor, Eric Garner, Trayvon Martin, Emmett Till and too many others. Each of these black lives matter," Zeitlin wrote in his statement.

In response to recent events, Zeitlin said that leaders across Tapestry's organization came together to think about how to contribute to change, and shared that they are currently working through a plan to "convene a number of social justice, legal and corporate entities to formulate a longer-term plan for addressing systemic inequality."

"The most important thing we can do right now is be human. I'm a human being, my 25,000 colleagues around the world are human beings and we've come through an extraordinary year. Two-and-a-half months locked into our homes, now watching, it seems as though every day another man, woman, getting shot or getting choked on the streets of our America," Zeitlin told George Stephanopoulos on "GMA" today. "This is the opportunity for us to be vulnerable, to connect with our employees, to connect more broadly with society."

"We understand that we are better together when different life experiences and perspectives allow us to develop ideas and products that none of us could have come up with on our own," wrote Zeitlin. "As brands whose core values are powerfully informed by the creative tension that cannot exist without diversity and inclusion, we cannot succeed if the ideal that is America does not succeed, including in different and diverse ways globally."

In response to Stephanopoulos' question on how to foster a culture that is actively anti-racist, Zeitlin said it's about honest conversation and celebrating people's differences.

Over the weekend, Sephora president and CEO Jean-Andre Rougeot shared a blog post on their website vowing to support organizations that fight for equality and racial justice and also addressing the company's black employees.

"To our black employees: We see you," said Rougeot. "We know you're hurting. We are here to support wherever and however we can."

Even with an increasing number of companies taking vows to fight racial injustice and making diverse internal changes, the response to "how do we have hope in the face of a 400-year-old problem," Zeitlin told "GMA" is that you just have to believe in hope and the American Dream.

"You gotta have hope. From where I sit, I believe so fervently in the ideal that is America. That ideal, it's about equal opportunity and the social mobility that comes with that ideal. When I see the young, black man in the street protesting, I sit there and I say, 'That's me' ... he's crying out for opportunity … if he's able to achieve the American dream, it makes all of us better," said Zeitlin.