A college student who took action after a professor at her school stated that women should not be recruited into fields like engineering, medicine and law has now raised over $70,000 for a scholarship for women studying those fields.

The Women in STEM, Medicine and Law Scholarship at Boise State University will provide scholarship money annually to one female student starting this fall, according to Ally Orr, the Boise State senior who started the scholarship.

"I never want a girl to look online and say, 'Oh look, a professor who teaches in higher education says I should stay out of STEM, medicine and law," Orr told "Good Morning America." "They should see the scholarship and see that 500-plus donors said, 'No, I will fund you if you want to go into these areas of study.'"

Orr, 22, a marketing major, said she started the scholarship shortly after listening to a speech Scott Yenor, a professor of political philosophy at Boise State University, gave in November at the annual National Conservatism Conference.

"Our feminist culture leads us to want less male achievement. Their excellence, after all, creates inequities. That’s a shame. That denial of reality has to stop," Yenor said in his speech, which was posted online and quickly went viral. "Every effort must be made not to recruit women into engineering, but rather to recruit and demand more of men to become engineers. Ditto for [medical] school and the law and every trade. Efforts should be redoubled to encourage more men to enter the medical field, space exploration, mining endeavors and every other high-end and even low-end profession."

Orr said she condemned Yenor's remarks on her own social media but felt like that was not enough to make an impact. When she saw a commenter suggest that a scholarship for women be created in Yenor's name, Orr decided she would be the one to do so.

"I thought with the little that I can control about the situation, at least I can help the people that he's hurting, and those are the women at Boise State," said Orr. "This is something that makes me so mad and I can't just wait for someone else to do something." 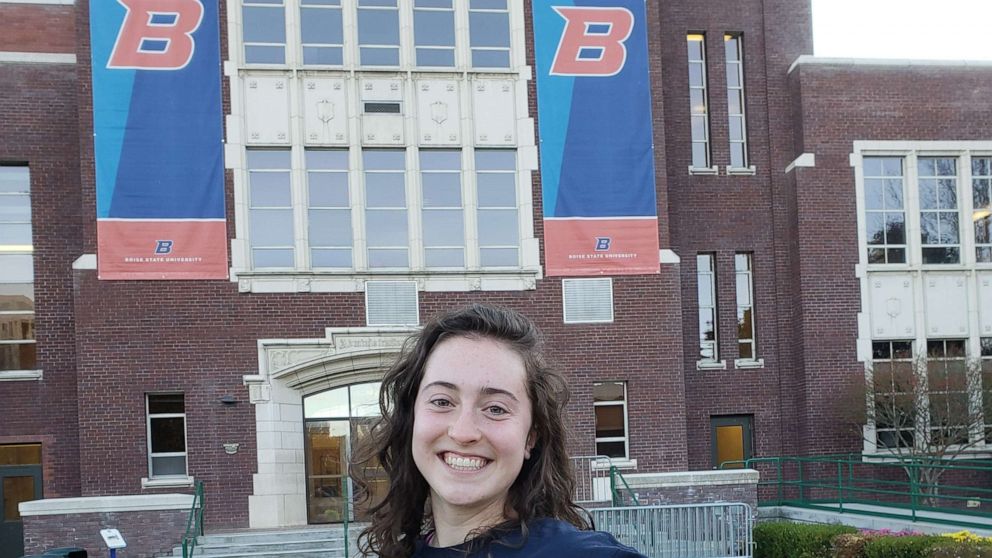 She started by creating a GoFundMe in early December to raise money for the scholarship, and sent over 600 emails to professors, faculty and staff sharing the GoFundMe link and asking them to support the scholarship.

As her emails were read and forwarded throughout the Boise State campus, Orr said she was both excited and nervous.

"I feel like my whole college career, I've always been taught to stand up for what you believe in, stand up when other people are being oppressed or discriminated against," she said. "And I thought, this is it, I'm doing it. But when I started sending those emails, I thought, wait, there are consequences for standing up to people like him, and I got really nervous."

The morning after Orr posted the GoFundMe link, she saw people had donated thousands of dollars in just hours. That number quickly rose as Orr's plea went viral outside of the Boise State community and people across the country donated money.

"There have been so many messages that have been sent to me by women in their 30s and 40s and even their 20s that said, 'I was the only woman in my computer science class or my science class,' and then saying just how hard it is to be lonely in those areas and not to receive as much support and to be thought of as less than," said Orr. "So I hope this scholarship shows women that there is support and you're needed." 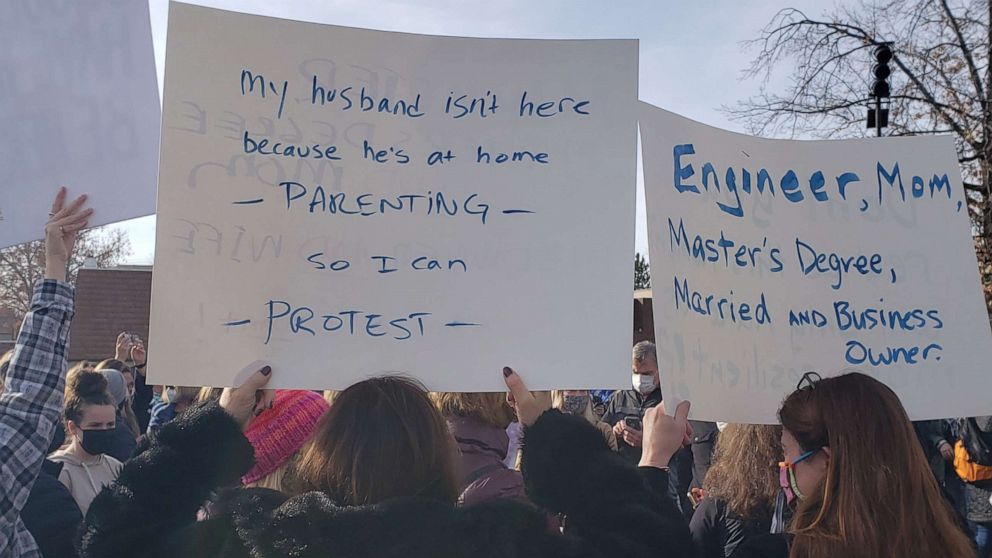 Ally Orr
People gather for a protest at the campus of Boise State University on Dec. 4, 2021.

Across the country, only 21% of engineering majors and 19% of computer science majors are women. Women make up just 28% of the workforce in science, technology, engineering and math (STEM), according to the American Association of University Women (AAUW), a non-profit organization that advocates for women and girls.

At Boise State, which has over 22,000 undergraduate students, a majority of whom are female, Orr's scholarship effort has been welcomed, Mike Sharp, a university spokesperson told "GMA."

MORE: Teen gets college scholarship, donates savings to help other students in need

"Boise State supports student scholarships and is grateful for Ally’s efforts to coordinate and promote women in STEM through the creation of the newly established scholarship," Sharp said in a statement. "The university is thrilled with the outpouring of support from our community, including Ally, and the financial commitment of our donors who have given to such an important and critical effort."

The Women in STEM, Medicine, and Law Scholarship created by Orr is endowed, meaning it will be awarded in perpetuity each academic year based on how much it continues to grow. This year, the scholarship award will be around $2,000, according to Sharp. 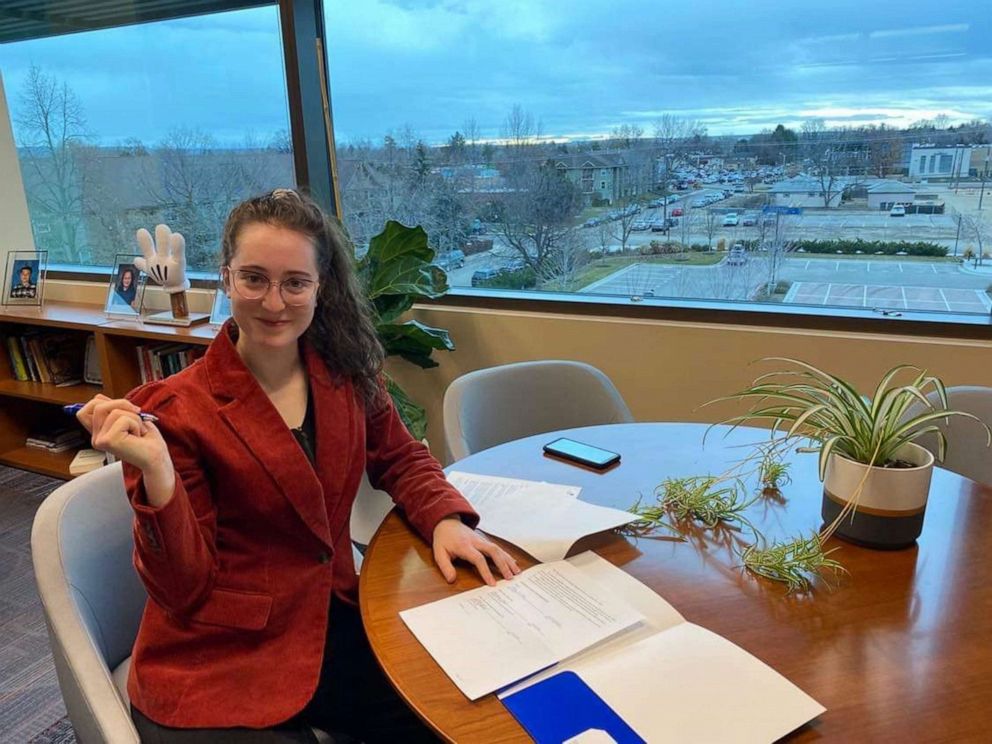 Sharp said Yenor continues to teach at Boise State but declined to comment on whether he has faced disciplinary action for his comments, stating, "The university cannot comment on personnel matters, however, we take complaints alleging violations of any law seriously, and investigate pursuant to university policy and applicable laws."

"Boise State University has a long tradition of supporting women. We continue to do so across the university. We defend their right to seek an education, to pursue a range of academic aspirations and dreams, and to make their mark in whatever ways they choose," Sharp said. "We support all women in our community — students, staff, faculty, and institutional partners — and in all academic and professional areas. We are grateful for the impact of our incredible alumni. Women belong on our campus, and we affirm the broad range of ways they work and live in the world."

"No single faculty member defines what Boise State — or any public university — endorses or stands for," he added.

Yenor did not reply to a request for comment. In a video he posted on Twitter in November, he defended his speech, saying, in part, "We should rebuild a country where men act with responsibility and purpose. We should build a country where young girls are encouraged to be mothers and wives as well as enjoying fulfilling jobs if they choose. We should elevate the importance of family life for both men and women in America."

Orr, who starts her final semester at Boise State Monday, said she is proud to have created a legacy for women on campus that will live on long after she graduates. She said she hopes the message women receive is "we want you here." 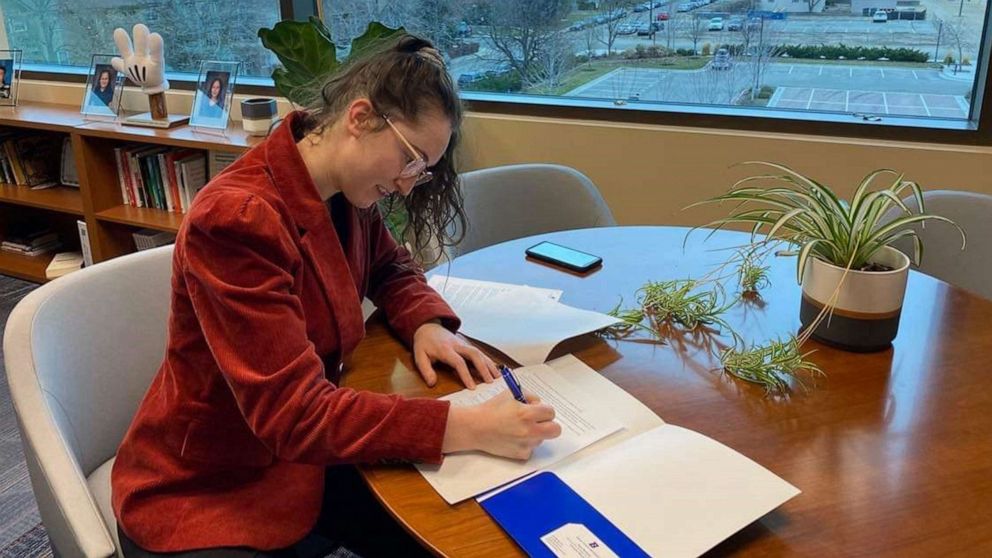 "I think the most hurtful thing that [Yoner] said is to recruit more men into these areas of study and not women," said Orr. "This scholarship says, 'No, no, no. We have money for you. You choose to be here and also, come join us. We want you here.'"