A high school senior who was diagnosed with terminal cancer and told he had three to five months to live married his girlfriend in a small ceremony celebrating their union and faith.

“A lot of people just thought I was getting married because I knew my life was about to be short … but that’s anything but the truth. It was more of a wake-up call from God,” said Chase Smith, 19, who was first diagnosed with Ewing’s Sarcoma, a very rare cancer of the bones, in 2014.

His cancer returned in March and he received a terminal diagnosis. 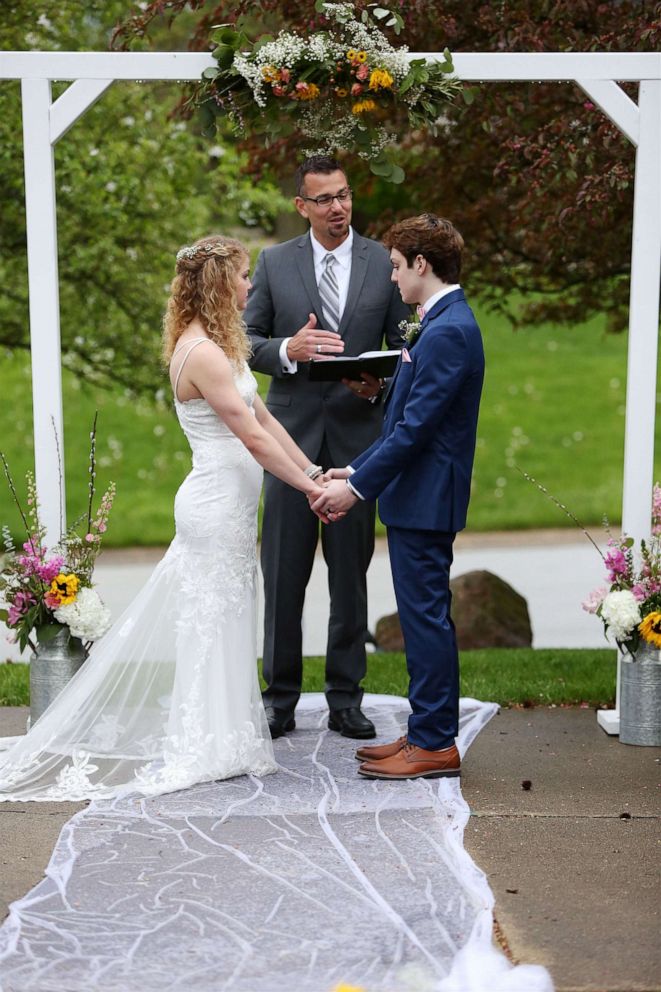 Courtesy Amy Phipps Photography
Chase and Sadie Smith got married on April 29, 2020 in Indiana.
MORE: Dads celebrate Pride in their own mini-parade with young daughter and son

“[I thought], ‘Hey, you do love this girl and you do have limited time,'" he said. "Anybody can die at any moment, so if you know you want to [get married] in the future, and you’re ready to do it and you’re able to do it and give your all ... start a journey together.”

Smith married his high school sweetheart, Sadie Mills, 18, in a small ceremony at Sadie's Bargersville, Indiana, home set up by their families on April 29. While they had planned to marry after college, they moved up the ceremony because of his illness.

“It was the best day of my life,” Mills said.

The couple's older sisters acted as wedding planners and worked to get the donations from small businesses. The special event was planned in just four days, said Smith's mother, Kelli Smith. 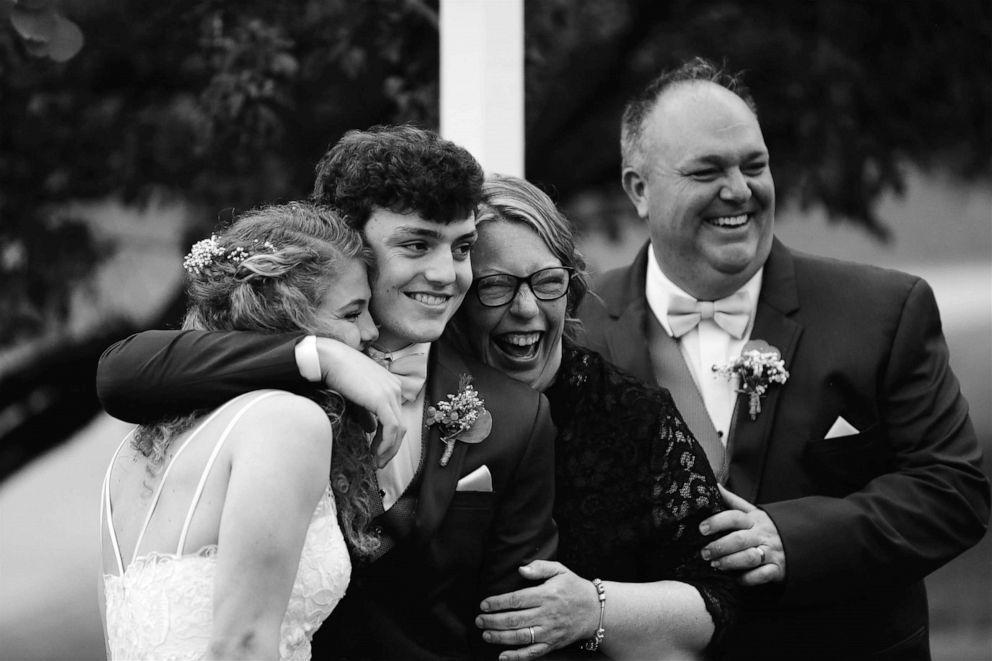 Courtesy Amy Phipps Photography
Chase pictured with his parents and Sadie on April 29, 2020.

“Chase and Sadie’s sisters are very similar, very organized," said Kelli Smith. "They worked extremely hard to reach out to the right people to get different things done [for the wedding]."

A local flower shop, event company, jeweler and dress store donated their services to give the two sweethearts the best ceremony possible.

“They even had fireworks to send Chase and Sadie off after the reception. Just lots of very gracious, good people willing to open up their businesses … and getting things done for us so that all of this can happen,” said Kelli Smith.

For Chase Smith, the most special part was seeing Mills at the end of the aisle.

“It was really important to me to not see her until she was walking down the aisle," he said. "I’ve always thought that’s a special thing and a moment I would want to experience.

“When I finally got to see her, everything else was just blank and it was a flood of emotion between me and her," he continued. "I couldn’t tell you the music that was playing or anybody else who was there … it was for sure one of the best moments of my life." 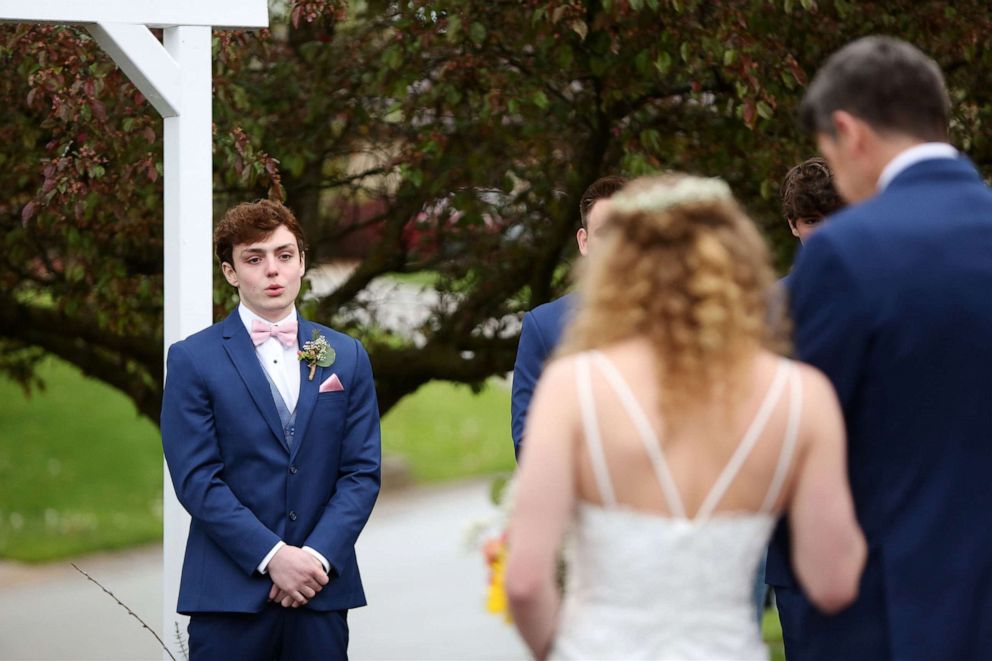 Safety at the wedding was paramount; social distancing was maintained during the small ceremony of around 20 people.

The couple, who attended rival high schools, met at a swim meet and have been inseparable ever since.

“Having [Chase] right by my side is just incredible. Anytime I need someone or anything, he’s just right there. It’s so natural [being married]. It was just definitely meant to happen," Mills said.

Mills plans on diving next year at Indiana University - Purdue University Indianapolis while commuting from home so that she can be with Smith and enjoy the time they have left together.

“[With treatment] you can feel great one day and you can feel like a garbage bag the next day and she makes the day that I feel bad 100% better," Smith said. 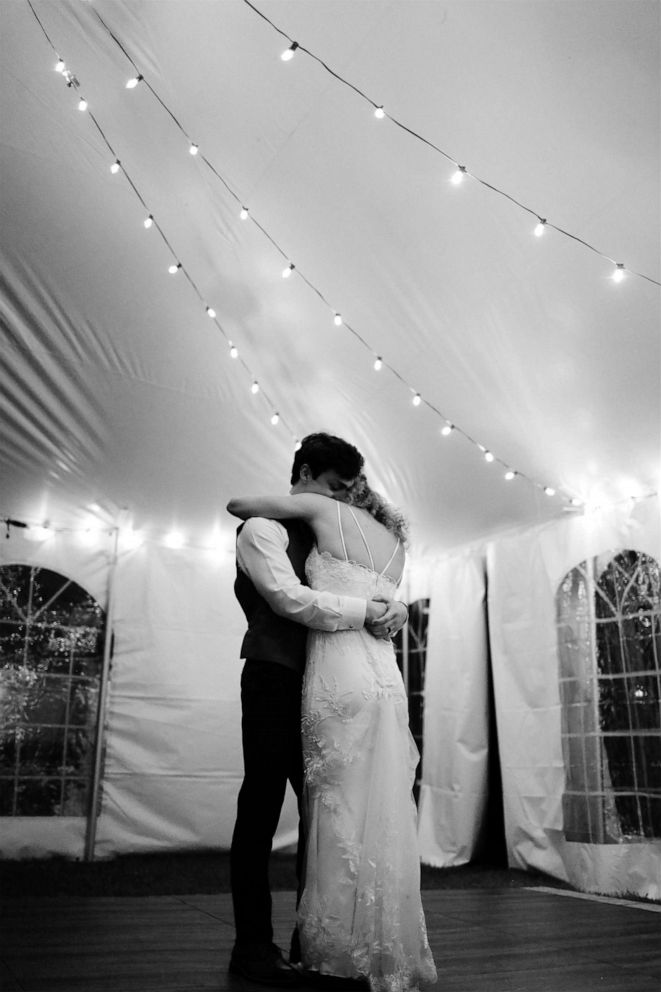 "Now we are radiating most of the spots and trying out some new drugs and treading the water to see what we can do now to extend my life," he said.

Mills has been a pillar of strength for her husband.

"[When I see him in pain] it’s definitely God supporting us during those times, because like Chase said, we pray every morning and night … my main focus is just to get him feeling the best that he can and comforting him,” she said.

"We were meant to be together," he added.