Brandt Jean, the 18-year-old who hugged Amber Guyger, the woman convicted of killing his brother, in court spoke out for the first time about the moment that shocked the nation and spurred a national conversation on forgiveness.

"This is what you have to do to set yourself free," Jean said in an exclusive interview Friday on "Good Morning America." "I didn't really plan on living the rest of my life hating this woman." 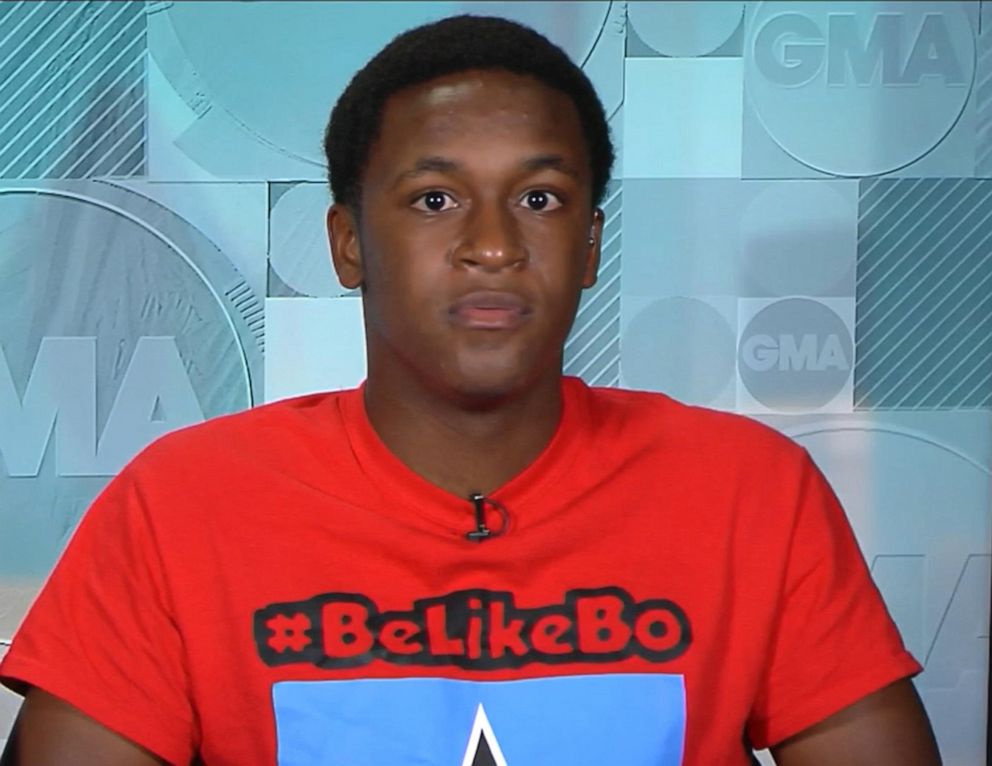 Guyger, a former Dallas police officer, was sentenced Wednesday to serve 10 years in prison for the fatal 2018 killing of Jean's brother, Botham Jean, whom she shot when she mistakenly entered his apartment believing it was her own.

The sentence appeared to initially disappoint the Jean family, who had hoped for far harsher punishment. Several members of the family broke down in tears, shaking their heads as if in disbelief of the jury's decision.

But Brandt Jean took the witness stand and spoke to Guyger, saying, "I know if you go to God and ask him, he will forgive you."

That was just my gesture, my decision of letting her know that I truly forgive her

"I love you just like anyone else and I'm not going to hope you rot and die," Brandt Jean told Guyger. "I personally want the best for you. I wasn't going to say this in front of my family, I don't even want you to go to jail. I want the best for you because I know that's exactly what Botham would want for you. Give your life to Christ. I think giving your life to Christ is the best thing Botham would want for you."

(MORE: Botham Jean's mother delivers emotional victim impact statement before sentencing of Amber Guyger: 'My life has not been the same')

Brandt Jean, who is attending his brother's alma mater, Harding University, then asked Judge Tammy Kemp if he could give Guyger a hug, a request the judge granted.

He stepped off the witness stand, met Guyger in front of the judge's bench and embraced as Guyger broke into tears.

"I don't even want you to go to jail. I want the best for you, because I know that's exactly what Botham would want." https://t.co/sWaPUtS0kj pic.twitter.com/xPAIKQLh6z

"I knew that I just told her that I forgave her and with usual instances the words only, they mean something, but I felt like that wasn't enough," Brandt Jean said on "GMA" of his request to hug Guyger. "That was just my gesture, my decision of letting her know that I truly forgive her."

"We don't know what's going to happen [in the future]," he said. "I just felt like I had to get that point across to her."

Brandt Jean's unprecedented gesture quickly went viral, with people applauding the teen for his act of forgiveness. But his decision left others, including members of his own family, surprised, a divide acknowledged by the teen.

"Each and every one has steps to get towards actually forgiving. I probably went through those faster than other people. Some people went through it faster than me," he said. "If you are trying to forgive [Guyger], understand that she is a human being. She still deserves love."

"She made a mistake that she probably truly regrets so if you want to forgive her, just understand that God forgave you," Brandt Jean added. "I know that every time I ask God for forgiveness, he forgives me, so who am I to not forgive someone who asks?"

At a news conference on Friday afternoon, Brandt Jean said that he didn't know the cameras in the courtroom were on when he spoke to Guyger and hugged her.

"At the time, I didn't know the cameras were on after the sentencing. I saw Amber's family leave the room along with Amber and we left and came back [into the courtroom]. Upon coming back I didn't think any cameras would be on," he said at the news conference.

The family's lawyer followed up, saying that Brandt Jean's action "showed incredible bravery, but it wasn't for show."

Bertrum and Allison Jean, the parents of Brandt and Botham Jean, told ABC News Thursday they were surprised by the remarkable act of mercy their 18-year-old son showed Guyger after her sentencing.

Bertrum Jean said that while he shared his child's sentiments, he hopes the compassion his son displayed to Guyger will "help her recognize the folly of her ways."

I know that every time I ask God for forgiveness, he forgives me, so who am I to not forgive someone who asks

"That was not saying there are no consequences for someone's actions, for her actions," said Bertrum Jean, a minister in St. Lucia. "But he forgave her and it is all right to forgive. Jesus said we need to forgive. So we can forgive people, right?

"I think what we saw was a jury that came back with a verdict of guilty of murder. That is significant to me," Allison Jean told ABC News. "No matter how long she serves that sentence, she has a record that she is a murderer."

Botham and Brandt Jean's sister, Allisa Findley, released a statement through the family's attorney saying she admired what her younger brother did in court.

"What Brandt did, I truly admire," she wrote. "I pray everyday to get to the point of forgiveness and he is already there. That's a weight lifted from him. He hugged our brothers killer to free himself and I stand behind him 100%."

The family's attorney, Lee Merritt, acknowledged "mixed emotions" in the Jean family over Brandt Jean's courtroom hug with Guyger, but called it "an important first step" toward easing the family's pain.

"Everyone in that family is hurting desperately because they loved Botham Jean and they won't be able to get past that hurt if they can't forgive his killer," he said on "GMA." "They believe that, I believe that and so it was an important first step."

Merritt also confirmed the Jean family hoped Guyger would be sentenced closer to the 28 years in prison recommended by the district attorney, but pointed out that legal justice is different than mercy.

"That will be closer to justice, but that is a whole separate conversation from the spiritual release of forgiveness," he said.

Daryl Washington, an attorney who also represents the Jean family, told ABC News both the family and the the public should consider it "a victory" that Guyger was held responsible for Botham Jean's death.

"As for the 10 years, it’s really hard to make a determination how many years you give someone for a crime," Washington said Friday on "The Briefing Room." "We know that there have been black males throughout this country who have been sentenced to prison much longer for a lesser crime."

"We just hope that during this time it gives Amber Guyger the opportunity to reflect and somehow one day she’s going to come out and admit that what she did was wrong," he said.