By Julia Jacobo, Zoe Magee
Share —
Sign up for our newsletters to get GMA delivered to your inbox every morning!

Queen Elizabeth II was known for her love of dogs and horses, and the two played a part Monday in her funeral proceedings.

The queen's horse Emma was photographed waiting as the funeral procession passed through Windsor, England, on its way to St. George's Chapel, where Elizabeth, who died Sept. 8 at the age of 96, will be buried. 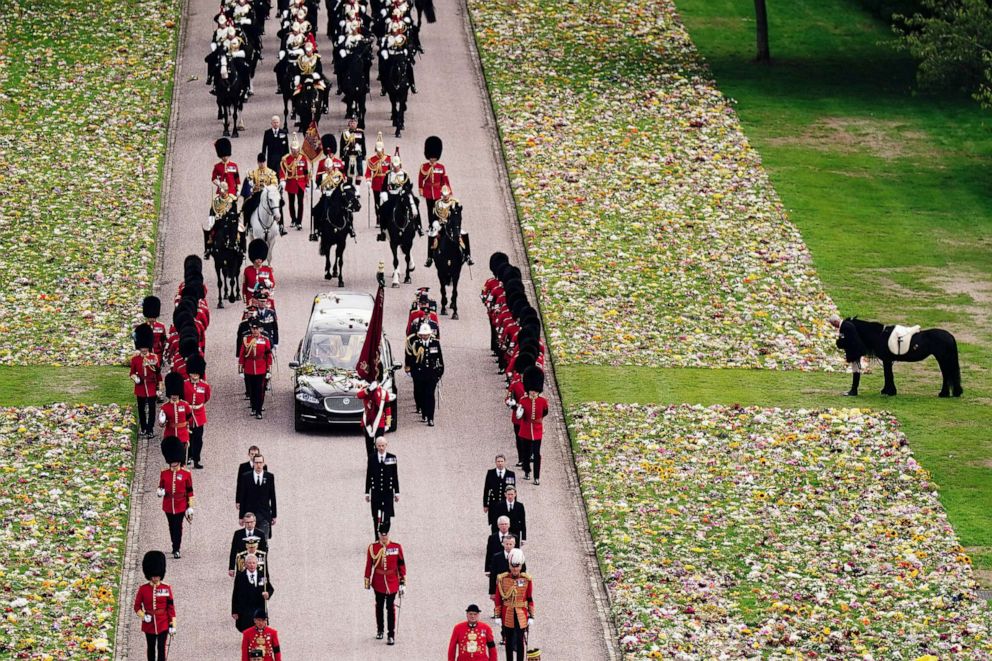 Aaron Chown/Pool via AP
Emma, the monarch's fell pony, stands as the Ceremonial Procession of the coffin of Queen Elizabeth II arrives at Windsor Castle for the Committal Service at St. George's Chapel, in Windsor, England, Sept. 19, 2022.

The queen's two corgis, Muick and Sandy, were also seen outside of Windsor Castle as the procession made its way to the chapel. 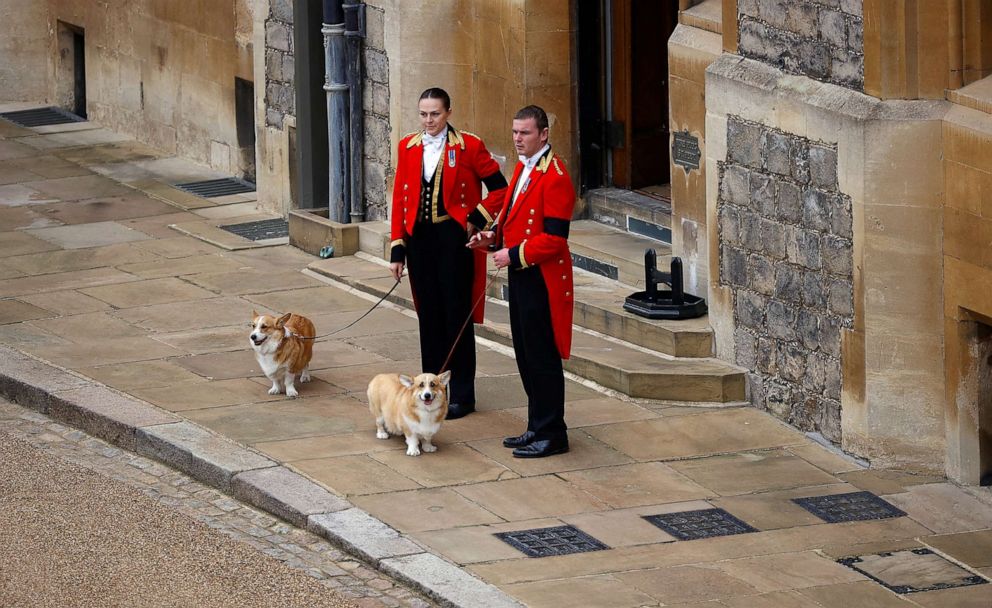 Peter Nicholls/Reuters
The royal corgis await the cortege on the day of the state funeral and burial of Britain's Queen Elizabeth, at Windsor Castle in Windsor, Britain, Sept. 19, 2022.

Elizabeth owned more than 30 corgis over the course of her 70-year reign, after receiving one as a birthday present when she turned 18.

Muick and Sandy were gifted to the queen by her son Prince Andrew last year, the same year that her beloved husband Prince Philip died at age 99. 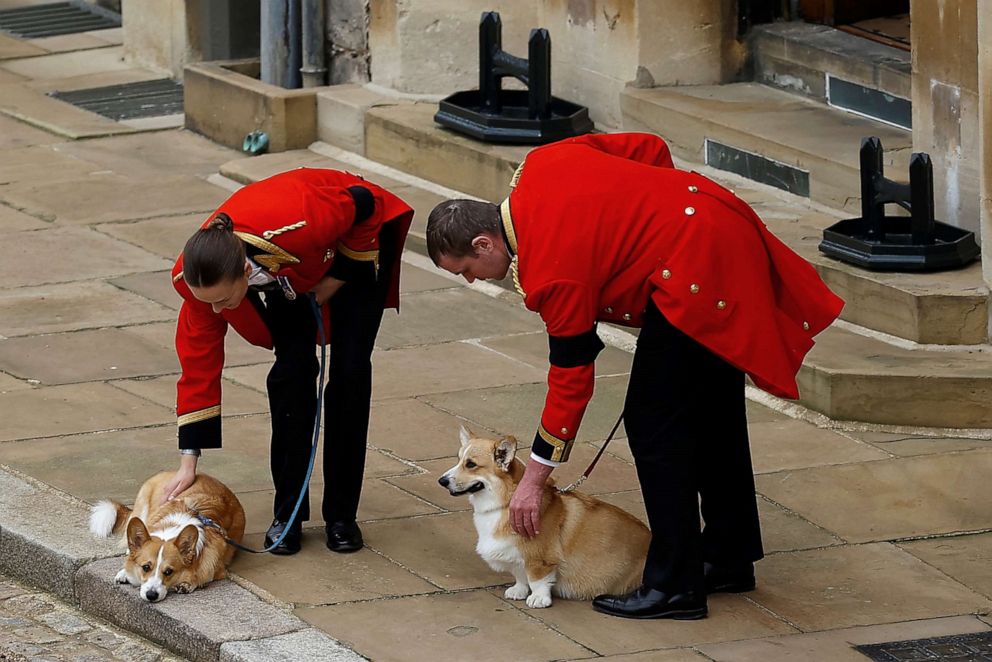 Peter Nicholls/Reuters
The royal corgis await the cortege on the day of the state funeral and burial of Britain's Queen Elizabeth, at Windsor Castle in Windsor, Britain, Sept. 19, 2022.

Andrew, the Duke of York, will look after the dogs now, in the wake of the queen's death. The dogs will live with him and Sarah Ferguson, the Duchess of York, at Royal Lodge in Berkshire, England, a source close to Andrew told ABC News.

Queen Elizabeth II's love for the breed began in 1933, when her father, then the Duke of York, gifted a Pembroke Welsh corgi to the family. The future monarch then received Susan, her very own corgi, and the first in a long line, as an 18th birthday present in 1944. Susan would later accompany Elizabeth and Prince Philip on their honeymoon at Broadlands in Romsey in 1947. 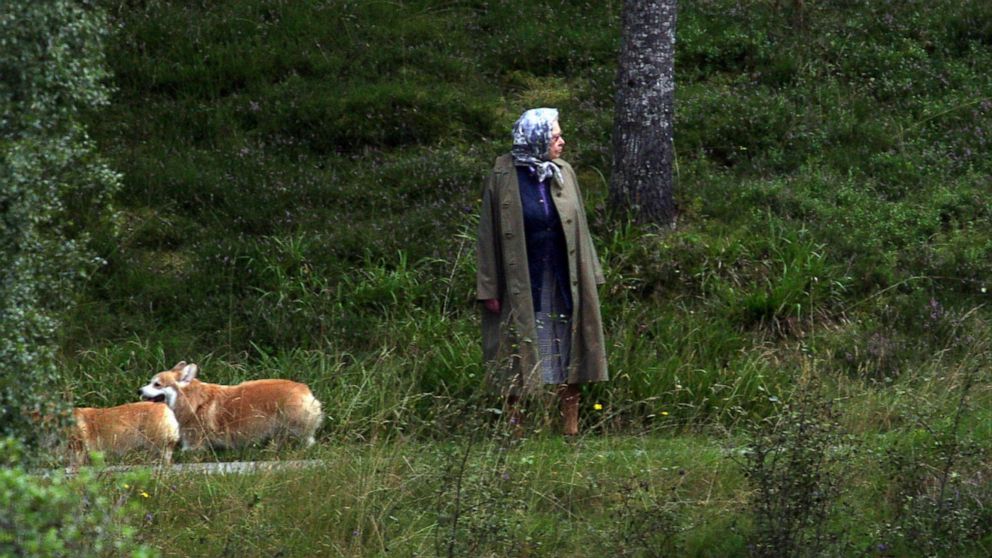 Nunn Syndication/Polaris
Queen Elizabeth II walks with her corgis after having had lunch at Balmoral Castle, Aug. 24, 2008.

Elizabeth is believed to have owned more than 30 corgis descended from Susan throughout her lifetime.

Some of the dogs included some corgi-dachshund mixes called "dorgis," which were conceived accidentally after one of Elizabeth's corgis mated with a dachshund owned by Princess Margaret, her sister.

MORE: A look at Queen Elizabeth's lifelong love of corgis

A pack of corgis soon became synonymous with the monarch and staples of the royal households.

"My corgis are family," the queen once said, according to Vanity Fair 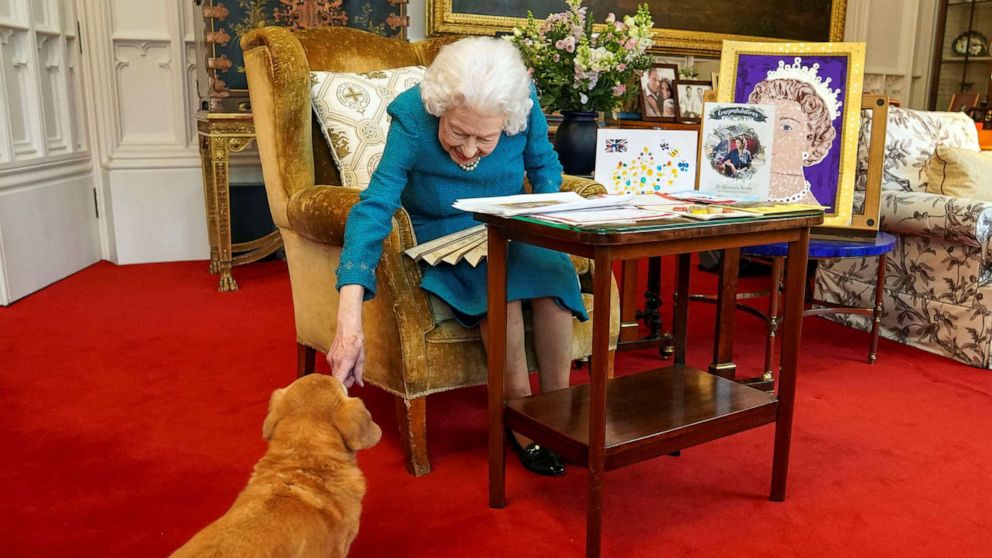 Steve Parsons/Pool/AFP via Getty Images
Queen Elizabeth II stroking Candy, her corgi dog, as she looks at a display of memorabilia from her Golden and Platinum Jubilees, in the Oak Room at Windsor Castle, west of London in a photo released on Feb. 4, 2022.

Elizabeth has been described by the American Kennel Club as "one of the most prolific and dedicated Pembroke Welsh Corgi breeders and ambassadors that the world has ever seen."

The queen stopped breeding corgis this past decade to avoid the dogs outliving her, Monty Roberts, an adviser to the queen, told Vanity Fair in 2015.

The last of the queen's purebred corgis, Willow, died in 2018. 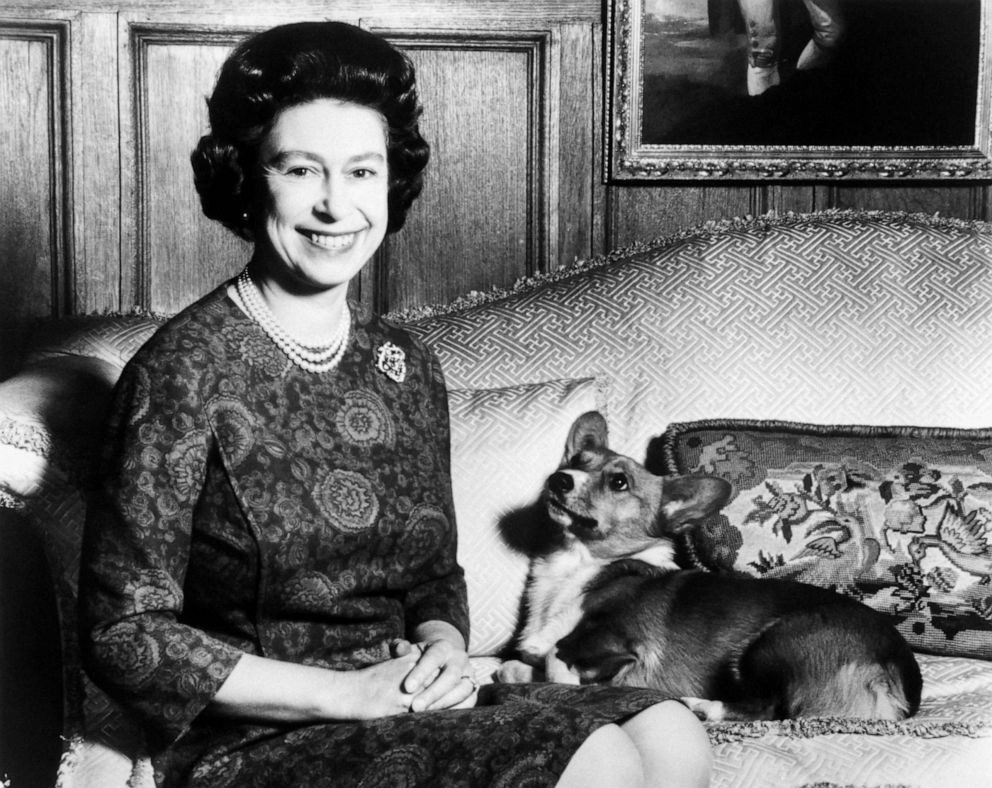 Ferguson found the puppies later gifted to the queen by Andrew following the hospitalization of Prince Philip in 2021. 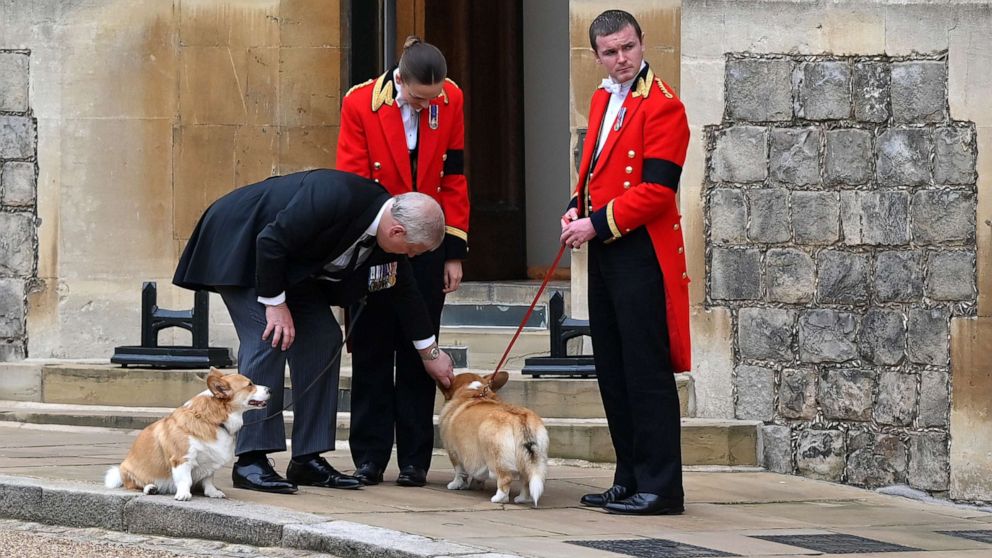 Justin Setterfield/Getty Images
Prince Andrew, Duke of York speaks with members of the Royal Household and plays with the Corgis on Sept. 19, 2022 in Windsor, England.

Ferguson first bonded with the queen over dog walking and horse riding and continued that friendship even after her divorce from Prince Andrew. Royal Lodge is only a few miles from Windsor Castle, and the pair would walk the dogs in the area, the source said.