By MaryAlice Parks
Share —
Sign up for our newsletters to get GMA delivered to your inbox every morning!

Women are running for elected office this year in historic and never-before-seen numbers, and they are winning too.

Voters and historians dubbed 1992 the "Year of the Woman," after female candidates won four new U.S. Senate seats, tripling their presence in the Senate that year.

Fast-forward to today, there are currently 23 female members of the Senate, but take a look a this election cycle. Since 2016 alone, a whopping 590 women in total ran for U.S. House, Senate and gubernatorial races, according to the Center for American Women and Politics at Rutgers University.

What's more, a record-number of those female candidates also won their party primaries and have advanced to general election match-ups this fall. 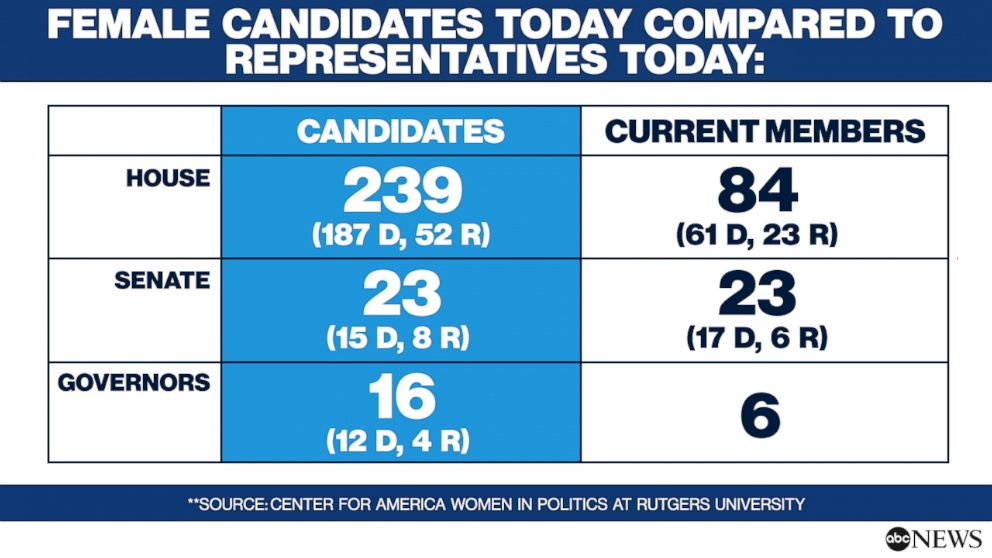 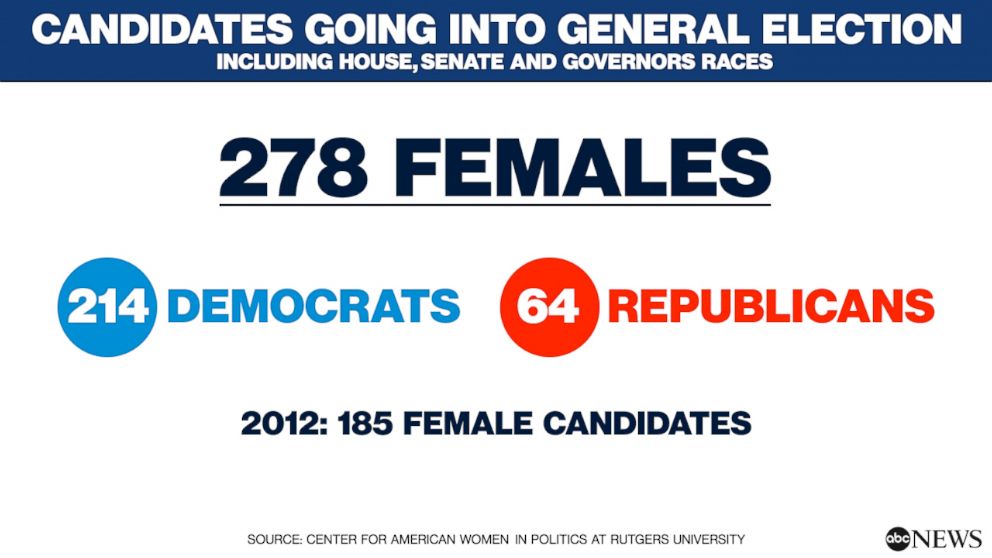 For example, of the 476 women that ran for U.S. congressional seats this cycle, 239 won their primaries, shattering the previous record of 167 set in 2016. Similarly, 16 women won nominations for gubernatorial seats this year. The last record was 10 total, set in 2010. By comparison there are currently only six female governors in office today.

From school board to city council, congressional and gubernatorial races, the women running for office this year are also fascinating. They bring with them diverse backgrounds, experiences and professions. Many have been trailblazers and ground-breakers their entire lives.

Here are a few female candidates to watch: 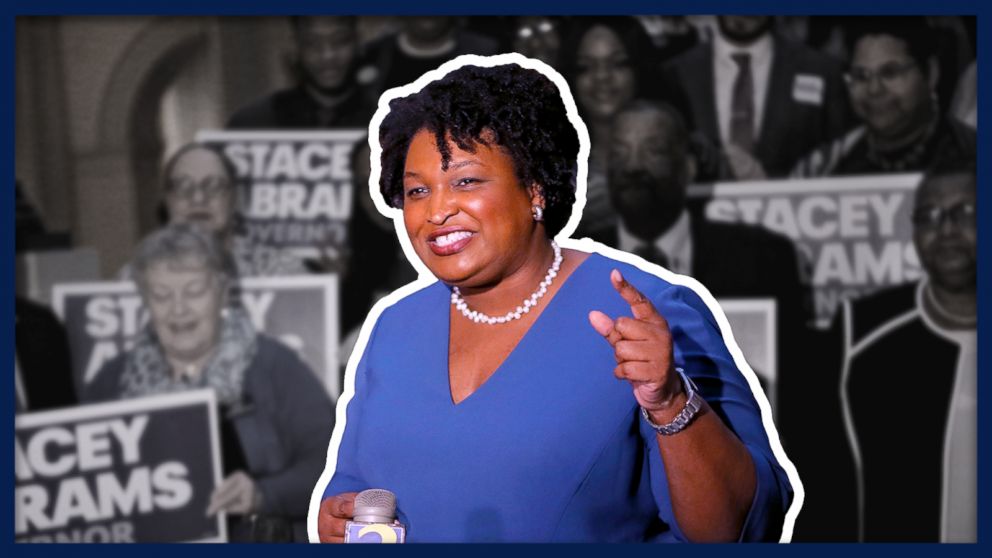 In the era of President Donald Trump, could an African-American woman really win a governor seat for the first time ... in the South?

Abrams is the Democratic Party candidate on the ballot in the Georgia gubernatorial race. Known for her proud progressivism and bold ideas, Abrams is a no-nonsense leader who, as the state's House Minority Leader, was the first woman to lead either party in the Georgia General Assembly. She has the backing of President Barack Obama, former Secretary of State Hillary Clinton and Vermont Sen. Bernie Sanders. 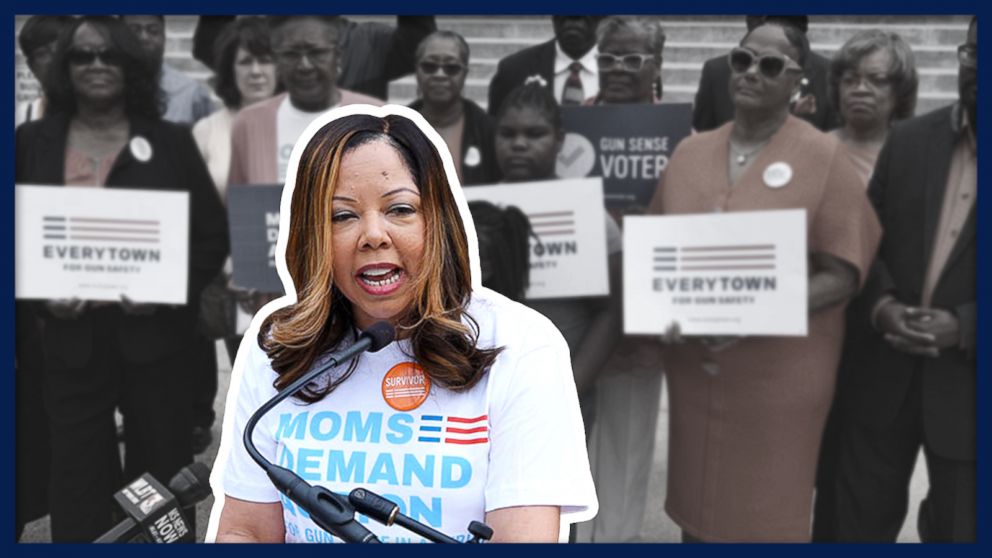 McBath is the Democratic Party nominee is Georgia's 6th Congressional District, currently held by a Republican. A former national spokesperson for organizations that promote gun safety reforms such as Everytown for Gun Safety and Moms Demand Action for Gun Sense, McBath first entered the political arena after her son, 17-year-old Jordan Davis, was shot and killed outside a gas station by a man who claimed Davis and his friends were playing their music too loud.

(MORE: Lucy McBath, lost son to gun violence wins Democratic nomination in Georgia: 'To not do anything is a tragedy')

“I can’t imagine the pain Lucy suffered when her son Jordan was killed, but Lucy has taken that tragedy and turned it into action, fighting for gun reforms that could put an end to the gun violence crisis gripping our country. Lucy’s determination to prevent more mothers from knowing her pain is exactly the type of courage we need in Congress,” former Congresswoman Gabby Giffords wrote when endorsing McBath. 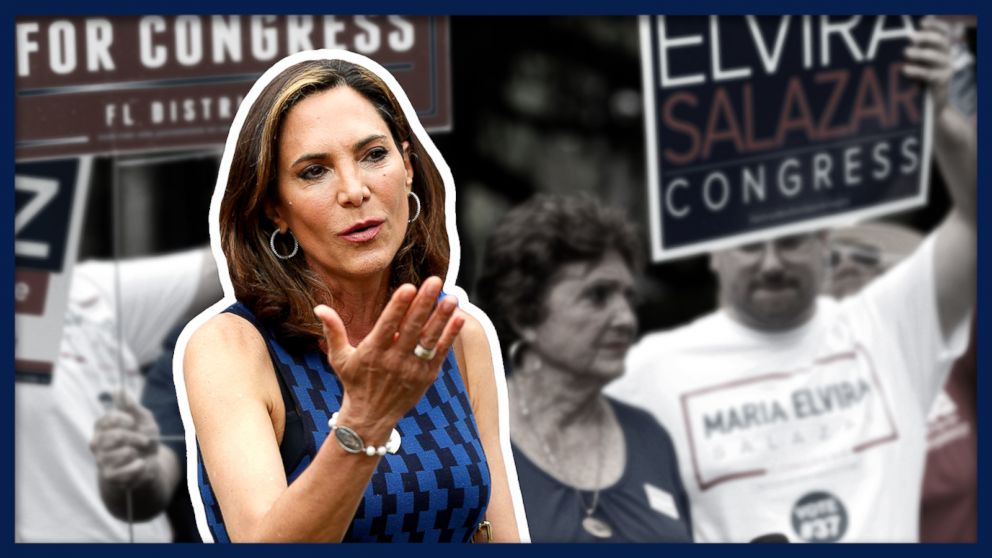 This Miami district was supposed to be an easy pick-up for Democrats, after long-time Republican congresswoman Rep. Ileana Ros-Lehtinen announced last year she was retiring. But then the GOP scored big with a celebrity candidate to follow in Ros-Lehtinen's shoes. Like Ros-Lehtinen, Eliva Salazar, is Cuban-American. She is also a former television news anchor, making her dynamic on screen and loved in the community. The Republican Party has been far-outpaced this year recruiting and electing women to run, especially women of color, but Eliva Salazar, if elected would be a force for them in Washington. 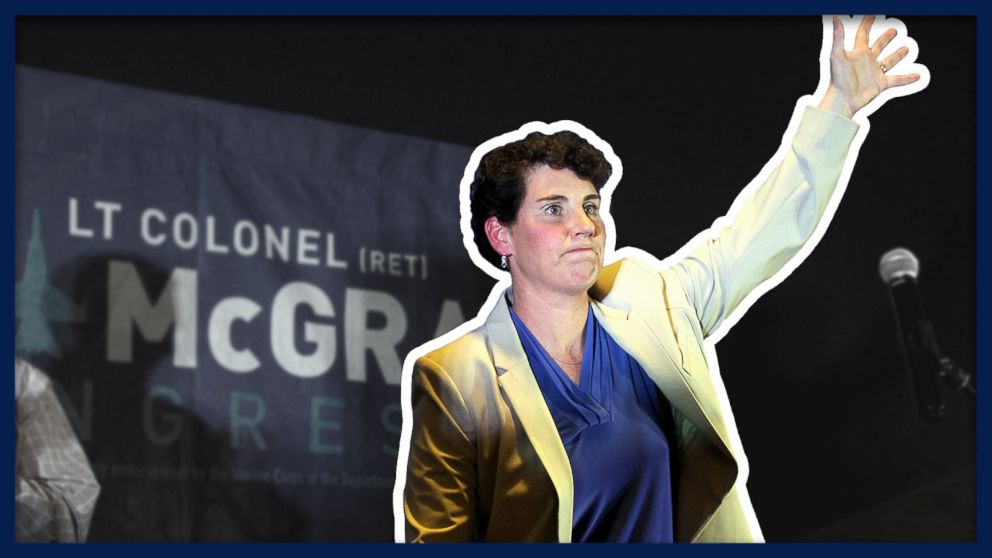 McGrath is used to breaking barriers. In some ways, running for Congress must look easier than flying fighter planes like she used to. A Marine Corps veteran with over 20 years of service, McGrath was the first woman to fly in an F/A-18 airplane on a combat mission. While in high school, McGrath pushed members of Congress to remove restrictions keeping women from combat. She attended the Naval Academy as did a number of other female veterans running in key races this year.

Should Democrats take back the majority in the House of Representatives, it will be in large part because more than a dozen Democratic women like McGrath with military or Foreign Service experience are on the ballot. Other standout names include: MJ Hegar, Texas-31; Gina Ortiz Jones, Texas- 23; Mikie Sherrill, NY-11; Elaine Luria, VA-02 and Abigail Spanberger, VA-07. 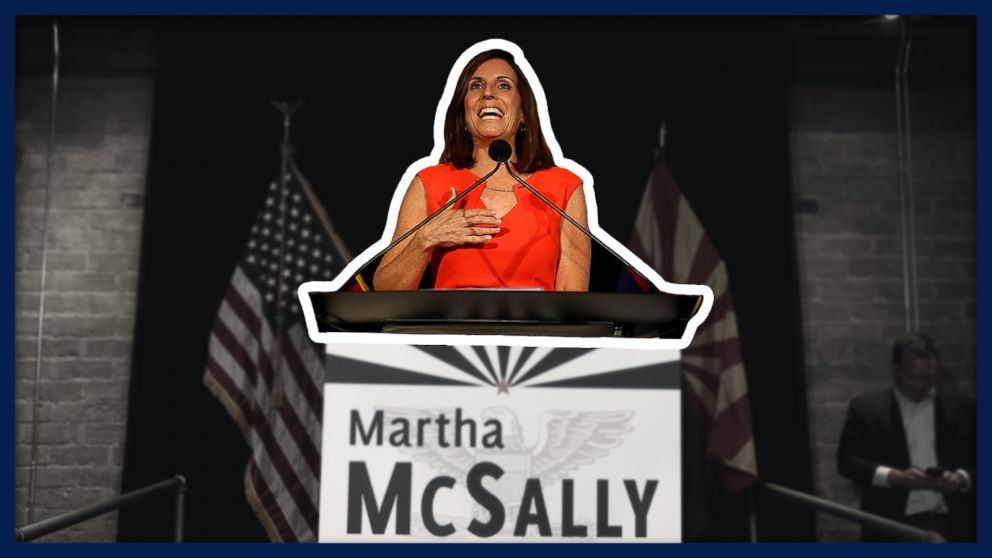 In one of the most high profile races of this election cycle, two women are squaring off.

Rep. Martha McSally is the Republican candidate in Arizona’s senate race, facing Democrat Rep. Kyrsten Sinema. McSally made headlines with a splashy and unforgettable announcement video, showing her in uniform, in the cockpit, racing through the sky and flying planes as she has done for decades.

Having served 26 years in uniform, McSally rose to full colonel in the US Air Force. Similar to McGrath, McSally has been shattering glass-ceilings her entire life. She was the first female pilot in the Air Force to fly in combat. Clearly the women running this year are brave and, can we agree, badass? 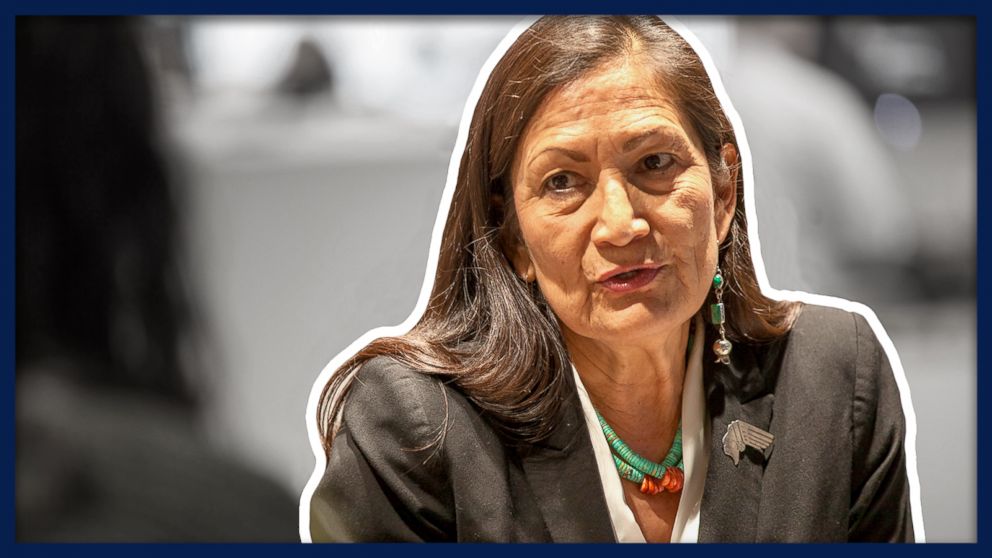 If elected (and she has a pretty good shot), Haaland would be the first female Native American in Congress ... ever.

Haaland, a former chair of the Democratic Party of New Mexico is running to represent New Mexico's 1st Congressional District. The first issue listed on her website is “climate and environment.” Haaland writes, “Indigenous rights and the fight for climate justice cannot be separated, and I will fight for tribal nations across the country who are battling the fossil fuel industry in their backyards.”

While more of an underdog in her race, Paulette Jordan, the Democratic gubernatorial candidate in Idaho, would be Idaho’s first female governor and the country’s first Native American governor, if she were to win in November. 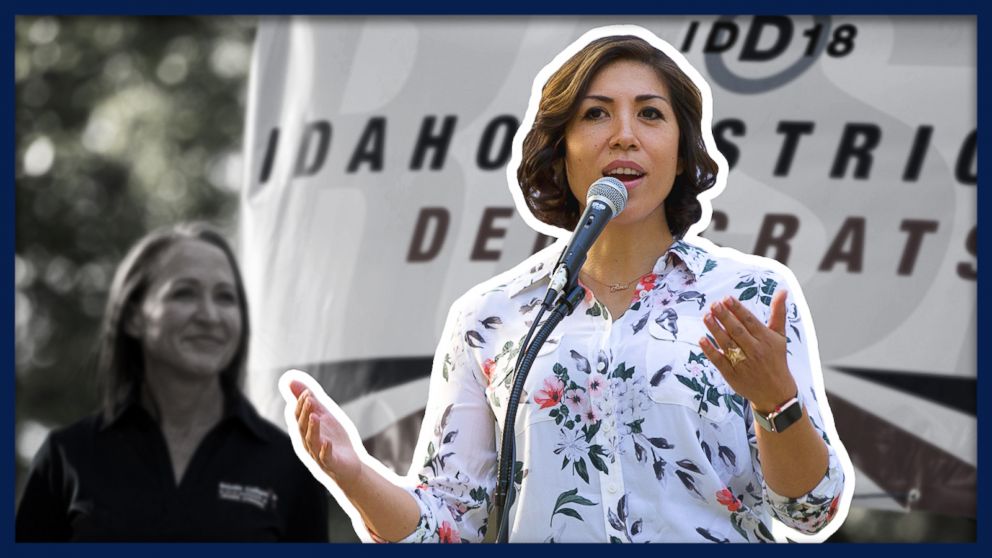 There are also two female Muslim congressional candidates, Rashida Tlaib in Michigan and Ilhan Omar in Minnesota, who are poised to make history as well. 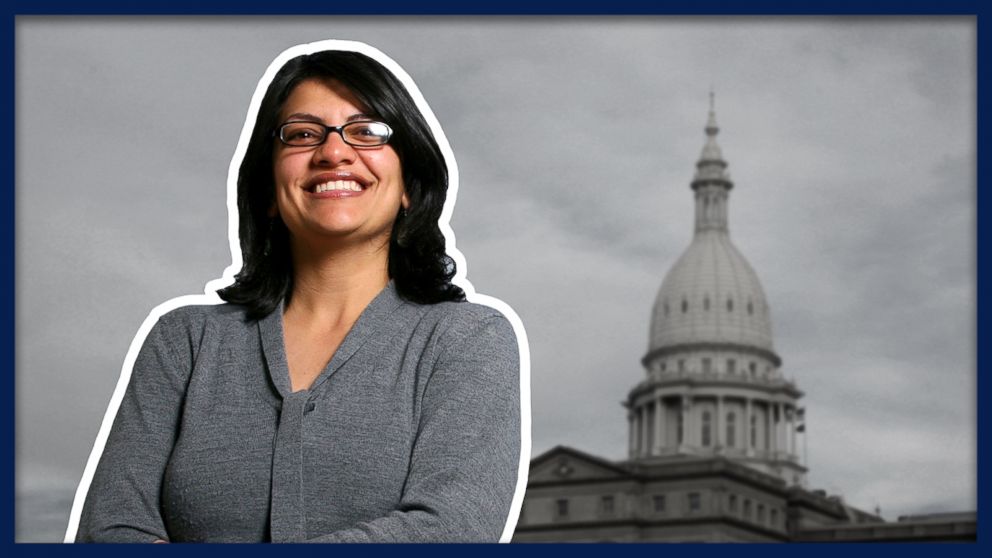 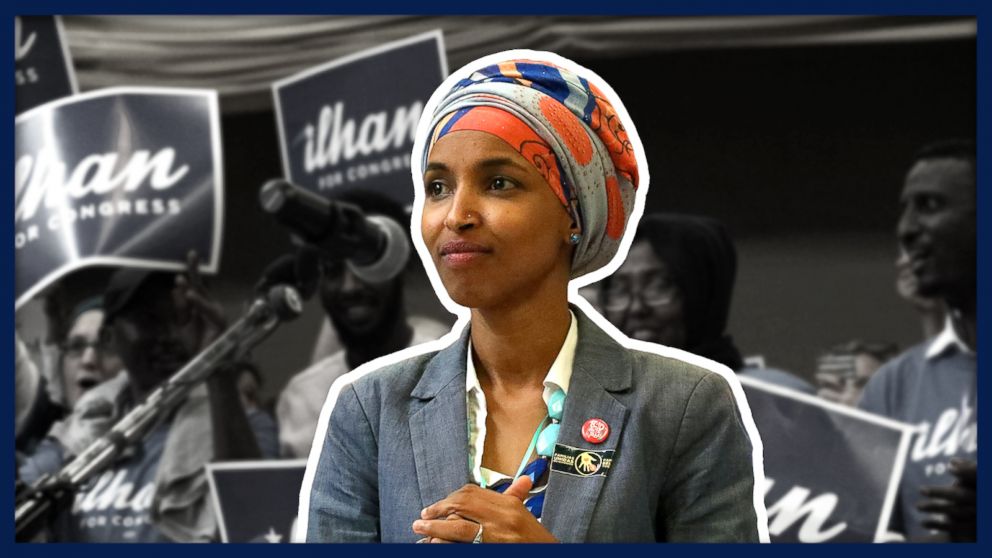 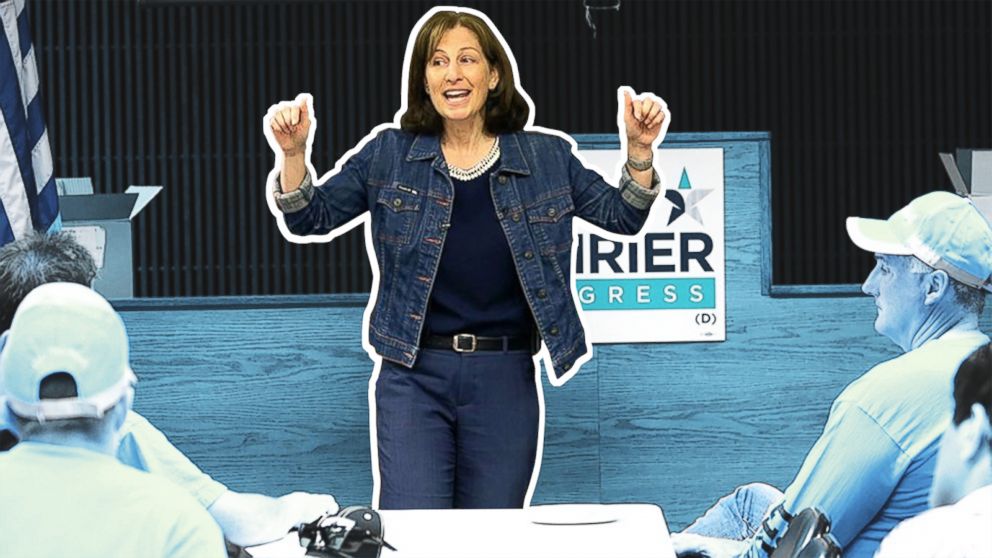 Shrier is one of several female doctors and nurses that are running for office this year too. Shrier is a pediatrician, hoping to turn her congressional district outside Seattle, Washington from red to blue. It has been fascinating to watch the messaging flip this year: Democrats are eager to talk about health care, protecting the Affordable Care Act and people with pre-existing conditions, whereas Republicans who used to campaign on repealing the landmark law, have noticeably quieted on the topic.

(WATCH: The Women Who Run: Why this doctor left her practice to run for Congress)
7 key races that tell the story of the 2018 midterms
Why It Matters: Submit a video telling GMA which issue inspires you to vote!