After being postponed due to the coronavirus pandemic, the annual Met Gala is making a comeback.

Though it's usually held on the "first Monday in May," fashion's biggest night is now taking place on Sept. 13 at the Metropolitan Museum of Art in New York.

The glamorous event -- "In America: A Lexicon of Fashion." -- will look very different with COVID-19 restrictions in place, but the fashion promises to be as jaw-dropping as ever.

"We also want to see a lot of independence and individuality. And a different kind of spirit, something that breaks the rules a bit," she added. 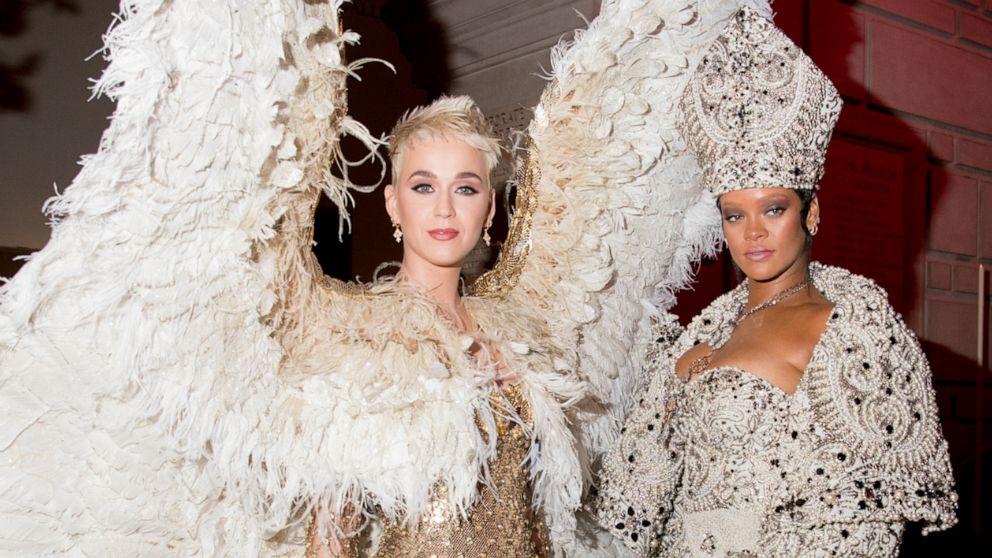 Kevin Tachman/Getty Images, FILE
Katy Perry and Rihanna at The Metropolitan Museum of Art on May 7, 2018 in New York City.

This year's co-chairs include a panel of iconic Gen Z and millennial notables such as Timothée Chalamet, Billie Eilish, Naomi Osaka and Amanda Gorman.

Wintour said she personally reached out to Gorman on a Zoom call.

"I always do invite the co-chairs personally. So we booked the Zoom, like the way we all lead our lives today," she said. "And she was perfect, looking immaculate. The hair, the dress, everything."

"I asked her if she would do the museum and myself such an honor by co-chairing the event and she said yes immediately," Wintour continued. "And what's been so lovely about these four young people, is they're so excited to meet each other... and don't know each other, but are thrilled to be in each other's company."

This year's Met Gala will also be streamed live for the first time ever, and co-hosted by actress Keke Palmer as well as comedian Ilana Glazer.

Traditionally, celebrities and fashion insiders show up in full glam and wide smiles, but this year's attendees will be required to wear face masks and must provide proof of their COVID-19 vaccination to partake in this year's festivities.

"Currently, all attendees at The Met Gala on September 13 must provide proof of full vaccination and will also be expected to wear masks indoors except when eating or drinking," a spokesperson for The Met confirmed to People. "We will update these guidelines as needed."

The guidance comes shortly after New York City announced a vaccine mandate for many indoor activities.

MORE: The Met Gala is back, highlighting 'American Fashion' on Sept. 13

"We decided to open the exhibition this year, 2021, and 2022, in two parts," said Wintour. "It's called 'In America.' And it's really looking at American design and American fashion in a very in-depth way."

MORE: How some restaurants are reacting to CDC guidance: Masks indoors, proof of vaccination

For the first time ever, the Met Gala is also planning to feature a sustainable plant-based menu with recipes from 10 New York City chefs, including Sophia Roe, Fariyal Abdullahi, Nasim Alikhani and Emma Bengtsson.

The chefs were chosen by restaurateur Marcus Samuelsson and Bon Appétit to showcase the talent in the industry.

"After a difficult two years for the restaurant industry, this will showcase the work and tell the stories of a dynamic group of chefs while presenting an exciting menu of delicious, plant-based dishes," Samuelsson told Vogue. "The gala offers an incomparable opportunity for emerging talent to elevate their careers and share their perspectives and craft."

Chefs being featured at the Met Gala will be creating Instagram Reels to give everyone a preview of the type of plant-based dishes that will be served.

Dishes include watermelon salad, roasted potato skins and Niçoise salad without the tuna.

Wintour, who has played a key role in the Met Gala since the mid- '90s said she likes that the event has really built up an expectation and a level of excellence within the industry.

She added, "But what's so exciting about this year is that we're really focusing in — in this part of the exhibition, the one in May, will be more historical ... on the future of American fashion."

Wintour also opened up Vogue's plans to continue to support and be a part of fashion designer Aurora James' 15% Pledge, where she calls on major retailers and brands to commit a minimum of 15% of everything from shelf space to diverse representation within each business' staff.

"I know we have a long way to go, but I think having that conversation and looking carefully at how we can do better across all our content platforms, as well as in the people that are working with us, has given me the understanding of where we are and how we could do more," Wintour said.