As Princess Kate makes her way through Boston, alongside her husband Prince William, she's traveling in high style.

This is the couple's first U.S. tour in nearly a decade, and the Princess of Wales has been spotted in a number of different looks -- including some that coordinate well with her husband's ensembles.

The royals have not been to the U.S. since 2014 when they visited New York City. This is also their first trip overseas since the death of Queen Elizabeth II in September.

Ahead, take a look at some of Kate's best style moments throughout the tour. 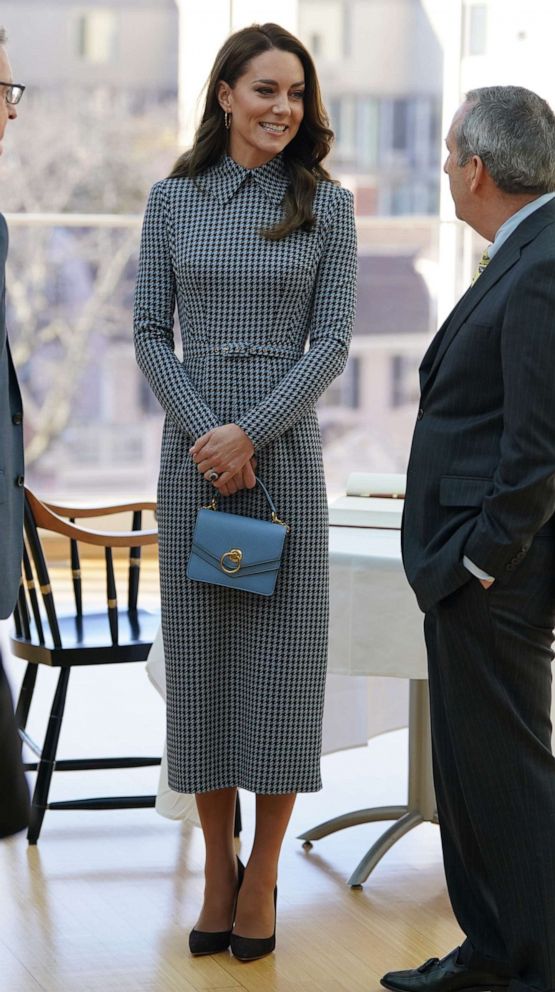 Going into day three, Kate stopped by Harvard University to visit the Center on the Developing Child as part of her ongoing work to elevate the importance of the early years to lifelong outcomes.

For this solo outing, she was seen wearing an elegant blue houndstooth dress by Emilia Wickstead and black suede pumps.

The look was complete with a small blue handbag and small gold hoop earrings. 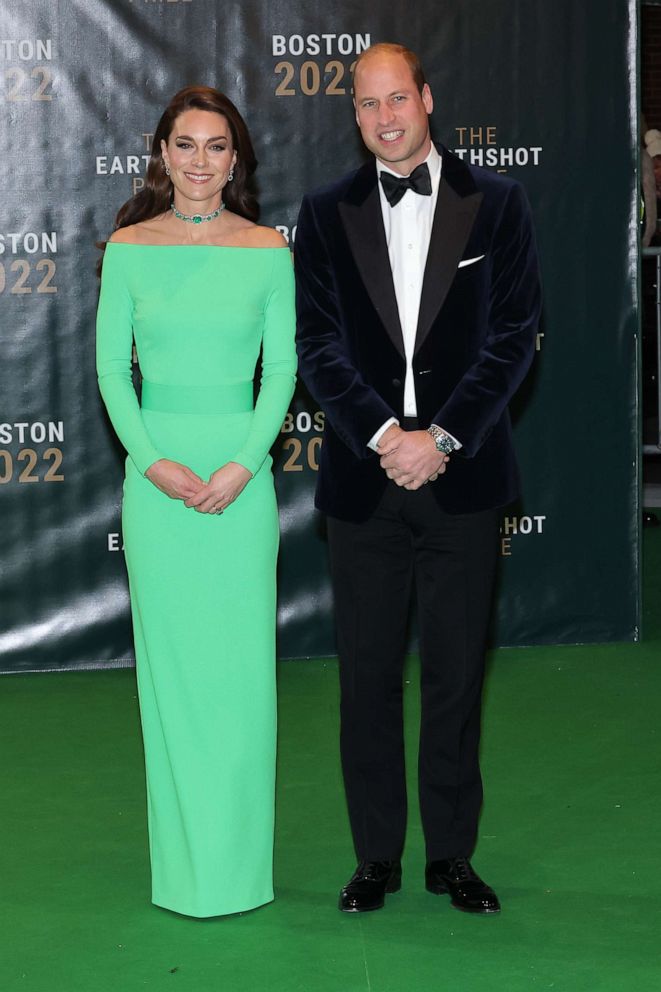 Later in the day, she changed into a completely different look, wearing a vibrant neon green dress designed by Solace London for the Earthshot Prize Awards green carpet.

Aligning with the event's sustainable fashion guidelines, she rented the gown from the U.K.-based fashion rental platform HURR.

The look was perfectly set off with a diamond and emerald choker that previously belonged to Princess Diana, William's late mother.

Kate posed for cameras alongside William, who wore a navy blue tuxedo jacket and bow tie. 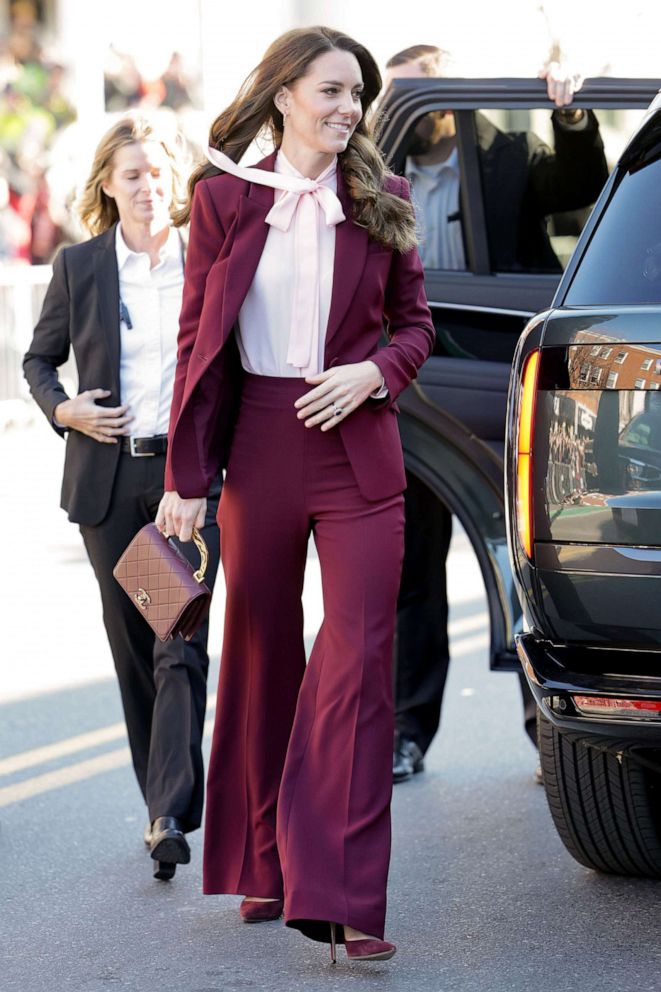 Chris Jackson/Getty Images
Kate Middleton, Princess of Wales arrives for her visit of Greentown Labs, a clean-tech incubator, to learn more about how climate innovation is nurtured and scaled, Dec. 1, 2022 in Boston.

One of Kate's looks for day two of the royal couple's U.S. trip included a burgundy Alexander McQueen suit paired with a pink pussy-bow blouse. She completed the look with matching burgundy pumps and a square quilted Chanel handbag.

She wore the look during her visit to Greentown Labs, a tech incubator, to learn more about how climate innovation is nurtured and scaled in Boston. 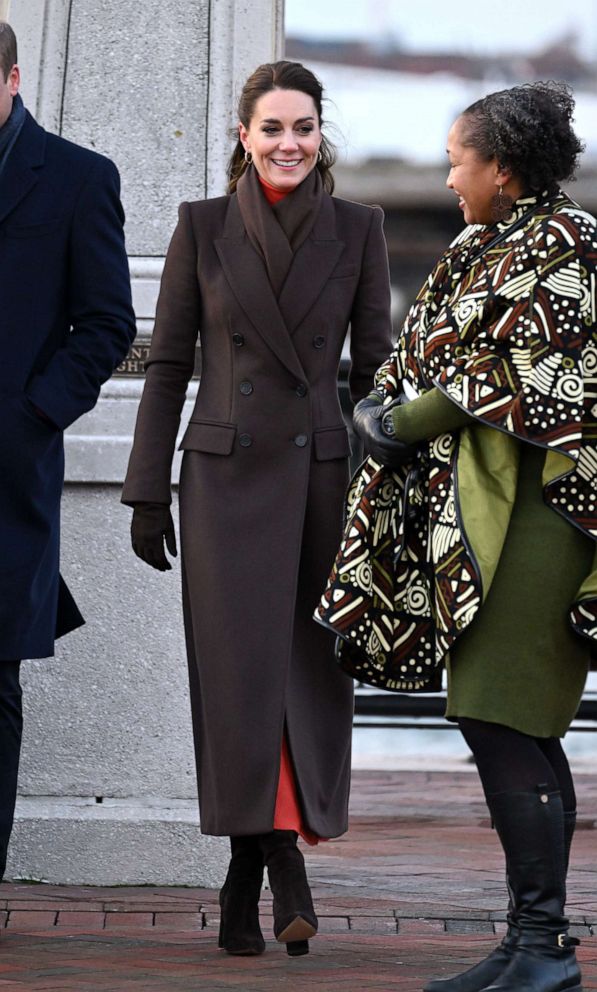 During her visit to see the changing face of Boston's shoreline, Princess Kate changed into a deep brown dress coat, boots and an orange turtleneck and skirt by Gabriela Hearst. 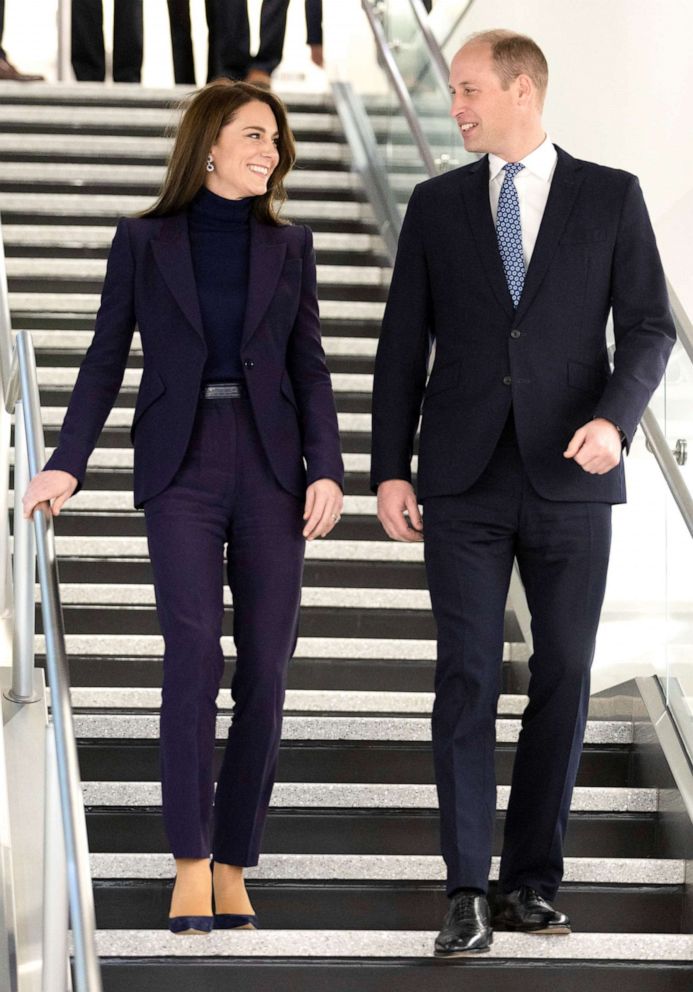 To kick off her array of looks, the Princess of Wales arrived wearing a suit that she wore with a black turtleneck top and sapphire and diamond drop earrings that once belonged to the late Princess Diana, William's mother.

Diana wore the earrings on several occasions, including to the 1996 Met Gala, where she paired them with a matching choker that included rows of pearls and a large blue sapphire at the center.

Following her arrival in Boston this week, Kate changed into a green Alexander McQueen dress coat along with a patterned Burberry dress underneath. She topped off the look with Shyla London earrings and a Mulberry handbag.

Kate then visited Boston City Hall to start the countdown to The Earthshot Prize Awards Ceremony. 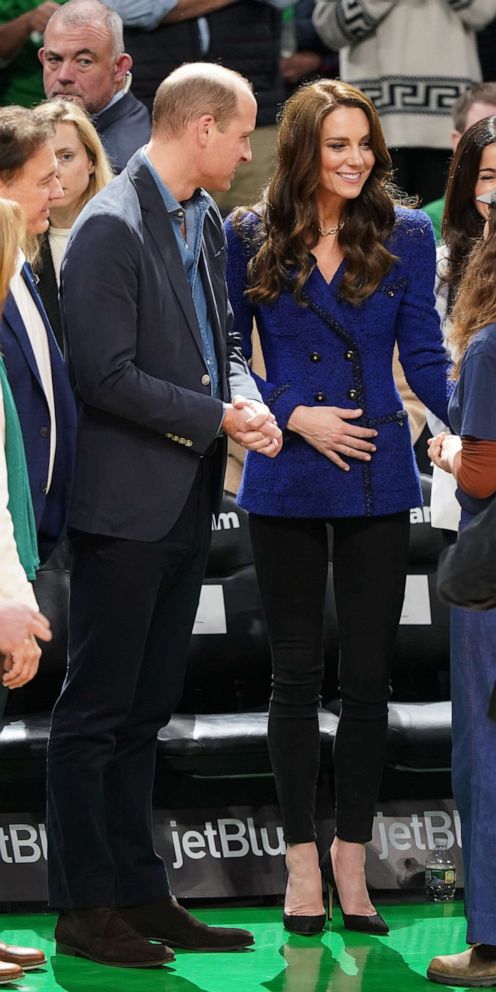 Paul Edwards/Getty Images
Kate Middleton, Princess of Wales, watches the basketball game between the Boston Celtics and the Miami Heat, Nov. 30, 2022 in Boston.

Last but not least, the Prince and Princess of Wales headed to catch a Boston Celtics versus Miami Heat basketball game.

For their final occasion of the evening, Kate was photographed wearing a blue tweed Chanel jacket that she's worn on other past occasions.

Kate completed the look with a gold necklace, black pants and pumps.