It's been five years since Rihanna stunned the public with the gorgeous yellow dress she wore on the Met Gala red carpet. But the "Diamonds" singer admits she felt so foolish, she almost didn't get out of her car.

Speaking to Access Hollywood on Wednesday when promoting her new Fenty Skin line, Rihanna said that the dress -- which solidified her status as a fashion icon among critics -- mortified her at first.

According to the nine-time Grammy winner, the dress, by Chinese couturier Guo Pei, was a little overwhelming. The 2015 event, held by the Costume Institute Benefit Gala at the Metropolitan Museum of Art in New York, was themed "China: Through The Looking Glass."

"That night, the choreography of getting in the car and getting out, like, we had to choreograph it," Rihanna recounted, saying she had to memorize answers to the questions, "Who sits at the door? Where does the coat go? Where do I sit?"

2:15
The Met Gala is the most star-studded fashion event of the year. Here's how Winnie Harlow stepped up her fashion game her second time around the Gala.

With all that rehearsing, the "Oceans 8" star said, "I remember being so scared to get out of that car because I felt like, 'I'm doing too much.'" 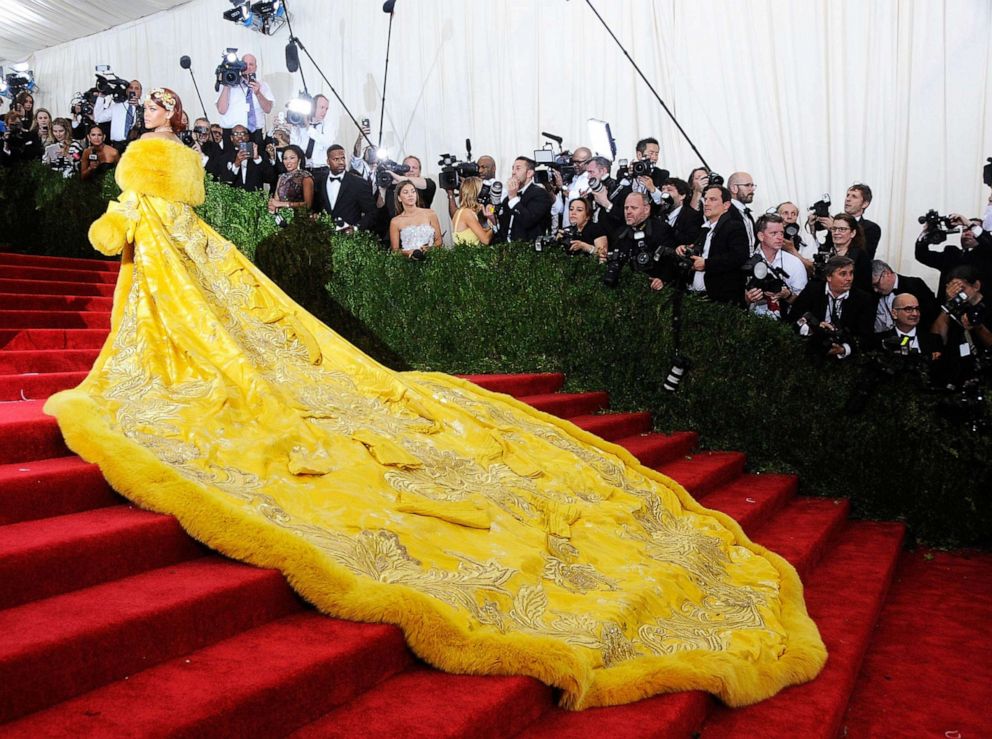 Rabbani And Solimene Photography/Getty Images, FILE
Rihanna arrives at "China: Through The Looking Glass" Costume Institute Benefit Gala at the Metropolitan Museum of Art on May 4, 2015 in New York City.

That dread hit an all-time high as she pulled up to the event. "I was driving past the red carpet, and I was just seeing, like, gowns, and I was like, 'Oh my god, I’m a clown. People are going to laugh at me,'" the 32-year-old explained.

So, her team had to put her night on pause so she could work up the nerve to make her grand entrance. "I circled like, three times, I’m not even joking," Rihanna dished.

WATCH: This artist makes the most realistic-looking celebrity sculptures

1:08
From Rihanna to Queen Elizabeth II, these celebrity sculptures are out of this world.

Rihanna ended up appreciating the look and she even enjoyed the memes, comparing her dress to food, that come from the fashion moment. "The frying pan with the egg? Legendary," she cracked.