When the U.S. Supreme Court heard arguments Wednesday over a Mississippi law that would ban most abortions after 15 weeks of pregnancy, a headline-making line of questioning came from the court's newest justice, Amy Coney Barrett.

Barrett, a conservative justice appointed last year by former President Donald Trump, questioned whether adoption rather than abortion could resolve the “burdens of parenting” noted in Roe v. Wade and Casey v. Planned Parenthood, the two major Supreme Court rulings on abortion that protect a woman's right to end a pregnancy before fetal viability.

Since Roe v. Wade was decided in 1973, the Supreme Court has never allowed states to prohibit the termination of pregnancies prior to fetal viability outside the womb, roughly 24 weeks, according to medical experts.

During Wednesday's arguments, Barrett, a mom of seven with two adopted children, questioned Julie Rikelman, a Center for Reproductive Rights attorney arguing against Mississippi’s 15-week ban, about safe haven laws, which protect parents from criminal prosecution if they leave unwanted infants at designated places, like hospitals. All 50 States, the District of Columbia, and Puerto Rico have enacted safe haven legislation, but rules and regulations vary by state, according to the Department of Health and Human Services' Children's Bureau.

"Insofar as you and many of your amici focus on the ways in which forced parenting, forced motherhood, would hinder women's access to the workplace and to equal opportunities, it's also focused on the consequences of parenting and the obligations of motherhood that flow from pregnancy," said Barrett. "Why don't the safe haven laws take care of that problem?" 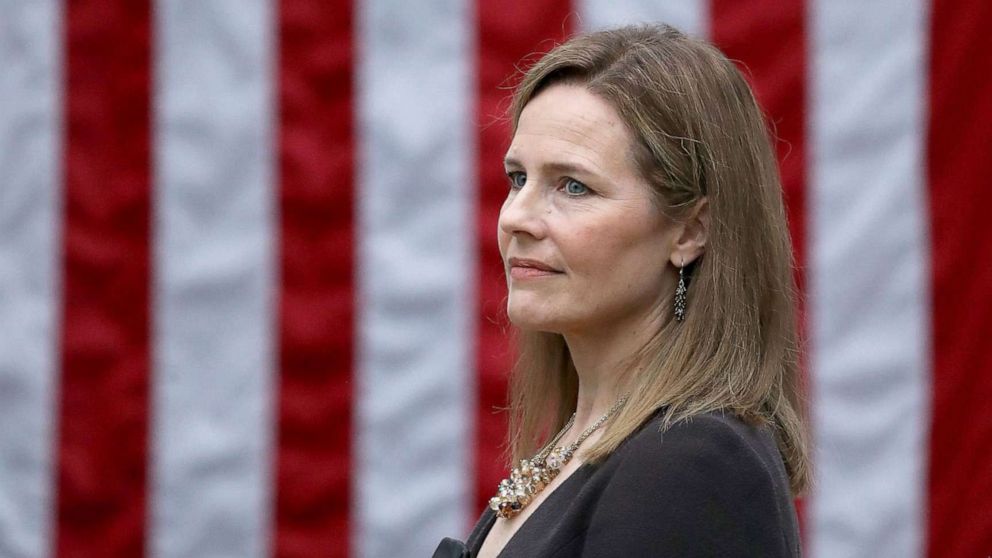 Chip Somodevilla/Getty Images, FILE
In this Sept. 26, 2020, file photo, Seventh U.S. Circuit Court Judge Amy Coney Barrett looks on during an event in the Rose Garden at the White House in Washington, D.C.

"It seems to me that the choice more focused would be between, say, the ability to get an abortion at 23 weeks or the state requiring the woman to go 15, 16 weeks more and then terminate parental rights at the conclusion," she said. "Why -- why didn't you address the safe haven laws and why don't they matter?"

Rikelman responded by pointing out the unique risks that pregnancy alone carries, saying in court, "We don't just focus on the burdens of parenting, and neither did Roe and Casey. Instead, pregnancy itself is unique. It imposes unique physical demands and risks on women and, in fact, has impact on all of their lives, on their ability to care for other children, other family members, on their ability to work."

It is a point echoed by reproductive physicians, who say talking about adoption in place of abortion misses the realities of people's lives and the dangers of pregnancy.

If the Supreme Court were to uphold the Mississippi ban, as the conservative majority appeared headed toward, legal scholars say it could clear the way for stringent new restrictions on abortion in roughly half the country.

"'I'm unfortunately not surprised that adoption was brought up so much, because I think people feel that pregnancy is this non-issue medical condition," said Dr. Leilah Zahedi, a Tennessee-based maternal fetal medicine specialist and fellow with Physicians for Reproductive Health. "It's very infuriating to be honest, because it shows their ignorance in the fact that pregnancy is not an uncomplicated condition for the majority of the United States."

"Pregnancy is probably one of the most dangerous things a woman does in her life, bar none," she said.

The U.S. is also a particularly dangerous place to give birth. It has the highest maternal mortality rate among developed countries, according to a 2020 study from the Commonwealth Fund, a healthcare policy-focused nonprofit organization.

Black women are three to four times more likely to die during childbirth or in the months after than white, Asian or Latina women, while Indigenous women are two to three times more likely, according to the Centers for Disease Control and Prevention.

Physicians like Dr. Nisha Verma, a board-certified OBGYN who provides abortion care, point out that abortion, on the other hand, is "incredibly safe."

"The risk of childbirth is as high as 10 times higher than the risk of abortion," said Verma, also a fellow with the American College of Obstetricians and Gynecologists. "That's a lot of risk to ask someone to take on."

The American College of Obstetricians and Gynecologists was among 25 medical organizations who together filed an amicus brief in the Dobbs v. Jackson Women's Health case that is now before the Supreme Court, arguing the Mississippi law is "fundamentally at odds with the provision of safe and essential health care, with scientific evidence, and with medical ethics." 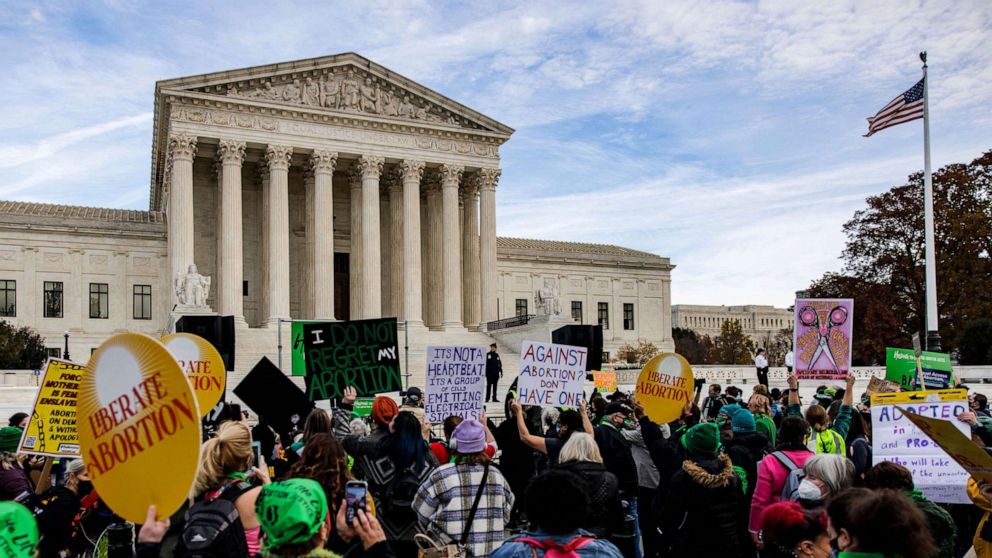 Samuel Corum/EPA via Shutterstock
Pro-choice activists protests outside of the U.S. Supreme Court as the high court prepares to hear arguments in a challenge to a law in Mississippi that is a direct challenge to Roe v. Wade in Washington, D.C., Dec. 1, 2021.

Providers like Verma also point to statistics showing that restrictions on abortion impact people who are the most vulnerable to complications from pregnancy and childbirth.

Around 75% of abortion patients are low-income residents, and nearly 60% of U.S. women of reproductive age live in states where access to abortion is restricted, according to the Guttmacher Institute, a reproductive rights organization.

In her response to Barrett, Rikelman cited the maternal mortality statistics in Mississippi alone, saying, "It's 75 times more dangerous to give birth in Mississippi than it is to have a pre-viability abortion, and those risks are disproportionately threatening the lives of women of color."

In addition to the physical risks people face during pregnancy, there are also other factors to consider, like the lack of safeguards for pregnant people in the U.S., experts say.

The U.S. does not have universal health care and does not provide universal child care. And as the Supreme Court weighs its decision on the Mississippi law, the U.S. remains the only industrialized, modernized country in the world without federally mandated paid family leave, according to data compiled by the Organization for Economic Cooperation and Development.

The House of Representatives last month passed a social spending plan that includes four weeks of paid family leave, eight weeks less than what was in the original spending package proposed this year by President Joe Biden. But that bill faces an uphill battle in the Senate, with Sen Joe Manchin, D-W.Va., a critical vote, opposed to the paid leave provision.

"Abortion is not an isolated political issue," said Verma, weighing in on Justice Barrett's specific comments on adoption. "I think the way that adoption was presented as just this easy alternative to abortion completely disregards the real experiences that people are having. It's a decision that's happening in the context of people's lives."

In the majority of cases when providers talk to pregnant people about the option of abortion, they also provide them with information on the option of adoption, according to Verma. She said, in her experience, a person's decision on their own pregnancy is not one made lightly, and is not one made without considering all options.

"The decision-making process is different for every person, but it is a decision that people are making carefully and intentionally with all of the information and in the context of their own lives," she said. "It's not something that we can impose on people."

Verma continued: "I see patients all the time making decisions to have an abortion from a place of love and compassion."

There were over 620,00 legal induced abortions in the U.S. in 2019, the most recent data available, according to the CDC. At the end of the same year, 2019, there were around 122,000 children waiting to be adopted out of the U.S. foster care system, government data shows.

Overall, just over 110,000 adoptions took place in the U.S. in 2014, the most recent data available, according to the National Council for Adoption, a national advocacy organization that promotes adoption.

Ryan Hanlon, acting CEO and president of the National Council for Adoption, said the organization does not have a position on Dobbs v. Jackson Women's Health.

Speaking specifically on safe haven laws, Hanlon said the goal should be to meet pregnant people and provide them with comprehensive information before they would find themselves in what he described as the "crisis" of leaving a child under the law.

"Safe haven laws can be a really wonderful thing, but by the time we've gotten to that point, we've already experienced a crisis," he said. "What I would hope for any woman who's experiencing an unplanned pregnancy is that she's getting information and support well before then, and for those women who do choose to place their child for adoption, that they are getting support before, during and after the birth."