Gillette has been known for the past 30 years as a brand for men with the tagline, “The best a man can get.”

Now the shaving company, owned by Procter & Gamble, is calling on men to be better in a new ad that has already provoked controversy.

The ad, released Monday on social media, takes on toxic masculinity, opening with the question, "Is this the best a man can get?" It goes into a montage of clips of sexual harassment, fighting, bullying and fathers saying of their sons, "Boys will be boys."

(MORE: Has #MeToo changed men? Guys respond to the movement and how they feel about masculinity)

The ad, titled "We Believe," has already been viewed more than 200,000 times on YouTube.

It drew mixed reactions on social media, with some people threatening to boycott Gillette.

@DollarShaveClub I'm going to try you out for the first time. If I get a good shave, if you don't try to shame an entire class of people, and if you just want to SELL a good product, you have me.

Others applauded Gillette and called out those who were critical of the ad.

The fact so many men here are genuinely offended by a commercial that isn't even targeting them in specific but rather how SOME men CAN act and how that itself is problematic is a perfect example of why commercials like these are needed sometimes. It's okay, it's not about you.

The mixed, and passionate, reactions are to be expected in this time of change amid the #MeToo movement, according to Christa Hodapp, Ph.D., director of the gender studies program at University of Massachusetts, Lowell.

"What we’re seeing right now is a huge conversation rethinking what we mean by gender roles," Hodapp told "Good Morning America." "I think a lot of people in the face of criticism are feeling very attacked and very defensive."

"Things are changing and when things change and difficult conversations come up there is some defensiveness," she added.

Gillette announced Monday it also plans to donate $1 million per year for the next three years to non-profit organizations "executing programs in the United States designed to help men of all ages achieve their personal 'best.'" The first organization Gillette plans to partner with is The Boys & Girls Clubs of America.

(MORE: Terry Crews on why toxic masculinity needs to be completely eradicated from our culture)

"Gillette is using our platform to advance a more modern, positive vision of what it means for men to be at their best," Damon Jones, Proctor & Gamble's vice president of global communications, told "GMA." "If we get people to pause, reflect and to challenge themselves and others to ensure that their actions reflect who they really are, then I think this campaign will have been a success."

The company began working on the ad in early 2018, according to Jones.

He took issue with critics who say Gillette is lecturing men on how to behave. Jones urged consumers to watch the entire ad themselves instead of reading headlines about it.

"Part of what we really wanted to do was to create a dialogue on the positive impact men have had, and I think we’ve been successful in sparking that dialogue," he said. "We’re seeing a lot of balance in the discussion."

He continued, "People on one extreme or the other are the most vocal but we generally have very positive reaction from both men and women of all ages."

Toxic masculinity in the spotlight

The Gillette ad includes a clip of Terry Crews testifying before Congress about the rights of sexual assault abuse survivors after he accused a high-profile Hollywood agent of assaulting him at a party.

Crews spoke about toxic masculinity after going public with his accusation. He told Esquire that he knew if he had thrown a punch the agent's way, "everyone in that room could make a phone call to every movie studio in the world: ‘Well, you know about Terry,’ and they’d believe them."

"This is what toxic masculinity is. People think, ‘Look how big you are, look how strong you are. If I was you, I would've killed him.’ But my body's not for killing. In America, we want to finish the movie. And the movie, if you’re a man, is 'Dirty Harry,'" he said.

Toxic masculinity is a topic that has been evolving over time, especially in pop culture, according to Hodapp.

She added, "The worst parts of it get played up so not only are the effects felt externally, but men suffer too because it’s inherently limiting. The damage [from it] is real and men report this pretty regularly."

The Gillette ad seems to address that point, showing clips of men looking at themselves in the mirror and a young boy trying to hug a woman who appears to be his mom as words like "loser" and "sissy" pop on the screen. 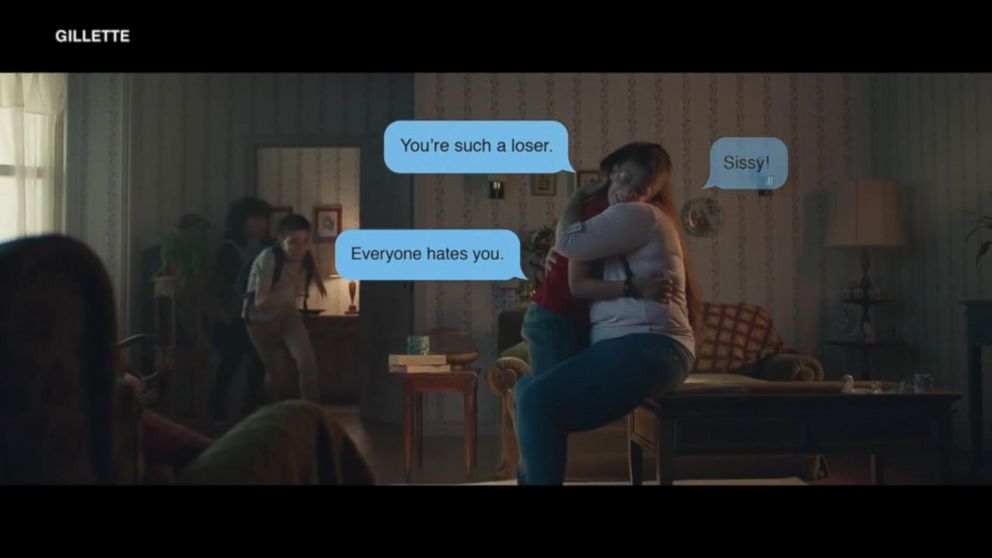 Hodapp noted she found it interesting that an ad from a shaving company had provoked such a dialogue so quickly.

"It’s really interesting that our politics are happening through commercials," she said. "That might be what we need to start talking, to bring it into the mainstream conversation."

Before this commercial, the #MeToo movement inspired some men to start making changes. A group of men in Philadelphia, in one example, meet on a regular basis to "hold each other accountable" and collectively lay the groundwork to stop "toxic masculinity," sexual assault and harassment.

The Gillette ad ends with a call for more men to "be the best men can be" because "the boys watching today will be the men of tomorrow."