Women know the drill: They start menstruating as teenagers, or earlier, and have the ability to become pregnant, and then as they age they lose both their period and childbearing abilities through menopause.

These life changes unique to women are one reason why there is a gender gap when it comes to depression, experts said.

About one in 10 U.S. women experience depression. Women are also almost twice as likely as men to have symptoms of depression, according to data shared by the U.S. Office on Women's Health.

Rates of depression between boys and girls stay roughly the same until puberty, at which point females show higher rates of symptoms that lead to depression, according to Dr. Cynthia Elise Rogers, director of perinatal behavior health service at the Women & Infants Center and Washington University in St. Louis.

I think if men had to experience the stress that women have to experience, we would definitely have higher rates of depression.

The exact role hormones play in women's mental health is still an area of active research, Rogers pointed out. That research is centered on the role environmental stressors play on a woman's mental health.

Some of the stress unique to women is a symptom of just being a woman in today's world, according to Jeff Temple, a professor and psychologist in the department of obstetrics and gynecology at the University of Texas Medical Branch. 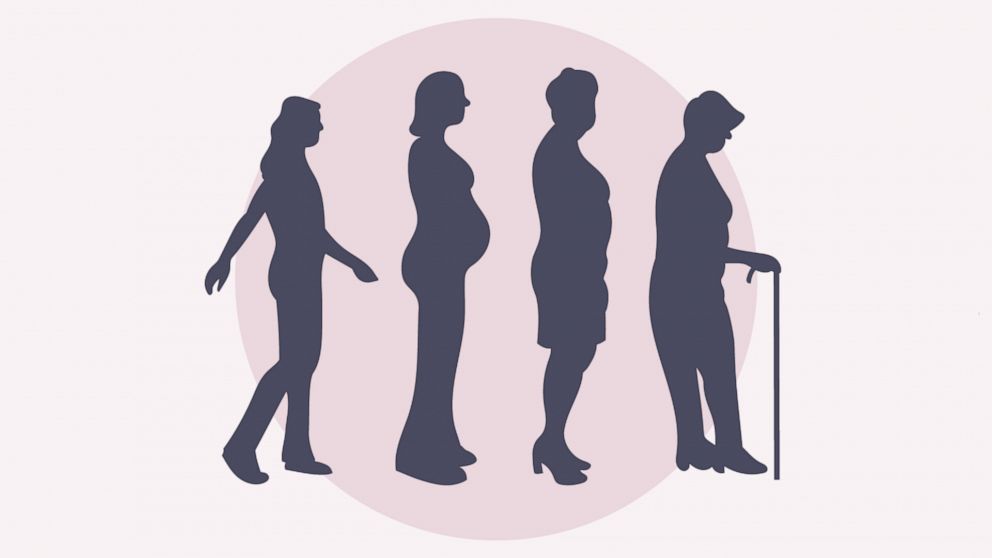 ABC News Photo Illustration
Women are pictured in different stages of their lives.

On World Mental Health Day, Oct. 10, here are five things every woman should know about her mental health.

1. How hormones can affect mental health

One theory long held by researchers is that fluctuations in female hormones may make women more vulnerable to depression.

The hormones that may affect women's health are estrogen, progesterone -- made in the body after ovulation and during pregnancy -- and weaker androgen, or male-type hormones like testosterone, according to Shruthi Mahalingaiah, an assistant professor of environmental reproductive and women's health at Harvard University.

In one example, studies have shown that during an estrogen decline in a woman's body, like after childbirth or ovulation, the metabolism of neurotransmitters in the brain speeds up, which can cause mood swings, Mahalingaiah said.

"There is individuality in this, so each women is different in how they experience their hormone fluctuations," she said. "Some might experience [mood swings] and seek help, others may experience and suffer it alone or some may have much more mild experiences."

Temple also noted that women experience more environmental stress than men -- lower pay and sexual harassment among them -- in addition to the stress placed naturally on their bodies by their monthly cycles.

"We are all born with a certain amount of an ability to cope with stress, and the more stress we experience, the harder it is for our bodies to cope," he said. "So when women have these everyday stressors compounded with big life events, it wears away their body's ability to cope."

Women tend to manifest stress inward, which can lead to depression, Temple said.

He added that women are often formally diagnosed with depression more often than men, even when they present the same symptoms.

(MORE: Shay Mitchell opens up about pre-partum 'severe depression' at start of pregnancy)

"We often put the onus on women, and I really think that we need some societal change too," he said. "As health care providers, we can do a better job of recognizing and treating the mental health consequences of things like sexual abuse and gender-based violence and the stressors that women experience more than men."

3. Depression as a medical condition

Depression can be caused by physiological processes in the body, which is way a psychologist like Temple is embedded in a medical unit and why an OBGYN like Dr. Jennifer Stanley is trained to deliver mental health care.

"One thing I'm always telling my patients is that there is a stigma against mood disorders and depression but they are medical conditions," said Stanley, a board-certified OBGYN at Houston Methodist. "Just like you would treat cancer, we need to treat depression, and just like with an untreated medical condition, you can also have a very bad medical outcome from untreated depression."

4. Perinatal depression is not a 'character flaw'

One of the most common times of depression for women comes around childbirth.

Perinatal depression is an umbrella term for depression experienced by women during pregnancy and up to a year after delivery. Postpartum depression occurs after having a baby and goes beyond the "baby blues" symptoms that typically last a few days.

"It is important for us to continue to educate women that depression is a complication of pregnancy, one of the most common complications," Rogers said. "It is not a character flaw but representative of a brain dysfunction, and there are many ways to receive treatment."

Postpartum depression can be triggered by both biological and environmental factors, starting with the new mom's levels of hormones -- estrogen and progesterone -- quickly dropping when she gives birth, which can lead to chemical changes in her brain.

New moms are also often sleep deprived, which can lead to changes in mood, and they face the societal pressure of being a mom.

"The expectation is moms are supposed to want to have kids and love their kids every second of the day," Temple said. "Often the best moment I have with a patient with postpartum depression is telling her that my two favorite times of the day are when I see my kids and when I leave my kids."

"It's important to normalize those feelings and make them OK," he said.

During life transitions, women should be particularly attuned to signs of depression, experts agree.

In addition to changes like childbirth and menopause, other changes such as the death of a spouse or the marriage of a child also tend to hit women harder than men.

The Centers for Disease Control and Prevention outlined symptoms of depression to look for: unexplained tears, having no will to get out of bed, not enjoying things you know you should or used to, significant changes in sleep habits or appetite, and increased fatigue. Depression can interfere with daily life and may last for weeks or months at a time, according to the CDC.

"All of those are things women may just blow off, but they are signs of depression," Stanley said. "Don't be afraid to talk to your provider."