A Florida mom who spent 85 days hospitalized with COVID-19 complications was able to return home to finally meet her newborn baby.

"I got out of the car by myself and walked into my own house and I didn't think I'd be able to do that," Paola Gambini, 32, of Groveland, Florida, said of her homecoming. "And now I'm changing my daughter's diapers and rocking her, and those are things I wasn't sure I'd be able to do."

Gambini, a hair stylist, tested positive for COVID-19 in late July, when she was 33 weeks pregnant.

She isolated at home with mild symptoms initially after testing positive, but then was transported to the hospital by ambulance when she began to have difficulty breathing.

"I remember the EMT saying, 'You're so lucky you called us. I don't know that you would have made it,'" said Gambini, who was admitted to the hospital and less than 24 hours later had to undergo an emergency C-section. "I was freaking out wondering if I was going to die, if the baby was going to survive."

Gambini gave birth to her daughter, Lilliana, on July 30. The baby was born healthy but was soon whisked away as doctors focused on continuing to treat Gambini.

"I remember touching her and she had so much hair. I'll never forget that moment. All I cared about was making sure she was okay," Gambini said. "They took her away and were like, 'OK, now we're going to take care of you.'" 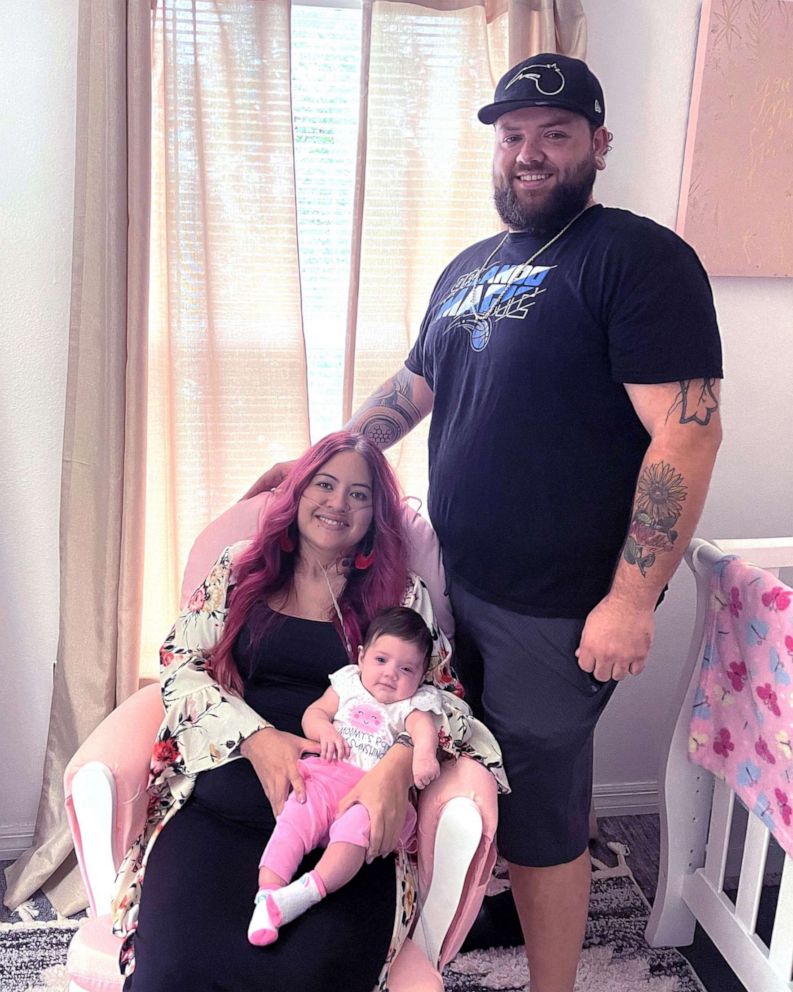 Paola Gambini
Paola Gambini is pictured with her fiance Michael Hazen and their daughter Lilliana.

Gambini, who had no pre-existing medical conditions but had not been vaccinated, was transferred shortly after giving birth to a nearby hospital, Orlando Health Orlando Regional Medical Center.

She was placed on a ventilator, where she remained for two weeks, and then on an extracorporeal membrane oxygenation, or ECMO, machine, which removes carbon dioxide from the blood and sends back blood with oxygen to the body, allowing the heart and lungs time to rest and heal.

Gambini remained on the ECMO machine for more than 40 days, while her parents, her fiancé, Michael Hazen, and his parents cared for Lilliana.

"My fiancé was able to visit me and there was not one day he missed," Gambini said. "He was my rock." 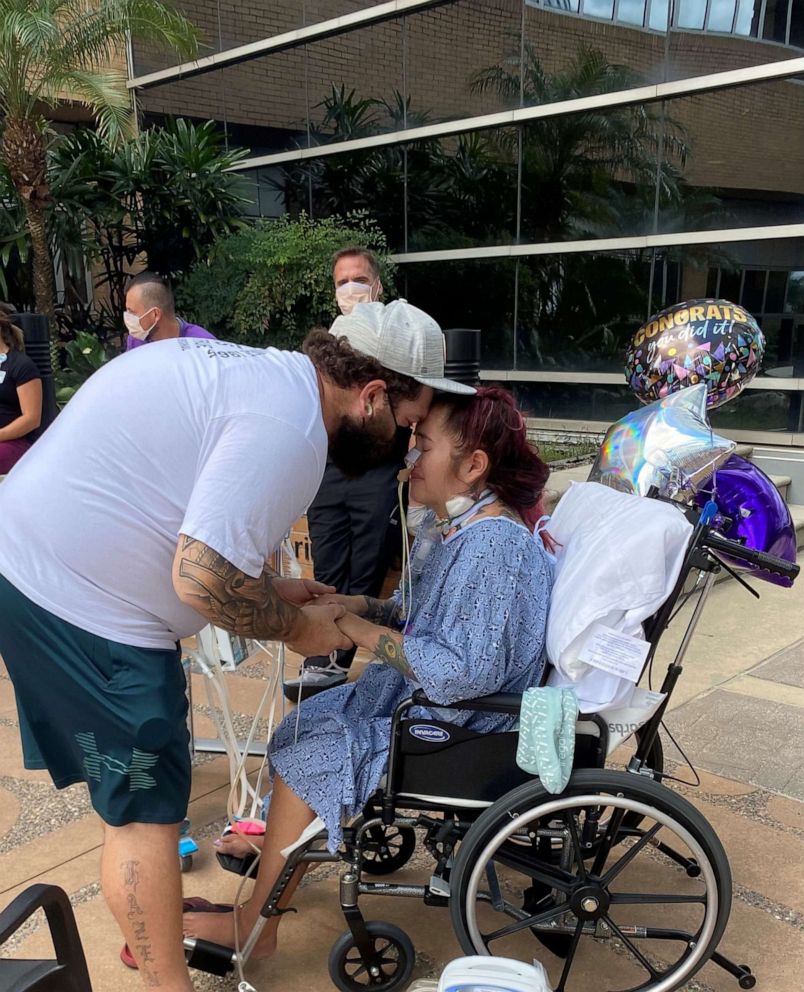 As Gambini's health began to improve, her medical team worked with Hazen to coordinate a surprise.

On Gambini's birthday, Sept. 3, she was reunited with her daughter for the first time since giving birth.

"I remember waking up and they sang happy birthday to me and asked if I was ready to see my baby," Gambini said. "They had balloons and my whole room was decorated."

Gambini was then able to see her daughter, recalling, "They let me hold her but I was so weak, I didn't want to drop her. My arms were so weak."

Gambini said the more she was weaned off medication, the more she saw how long her road to recovery would be, but she was determined to do it in order to go home to Lilliana. 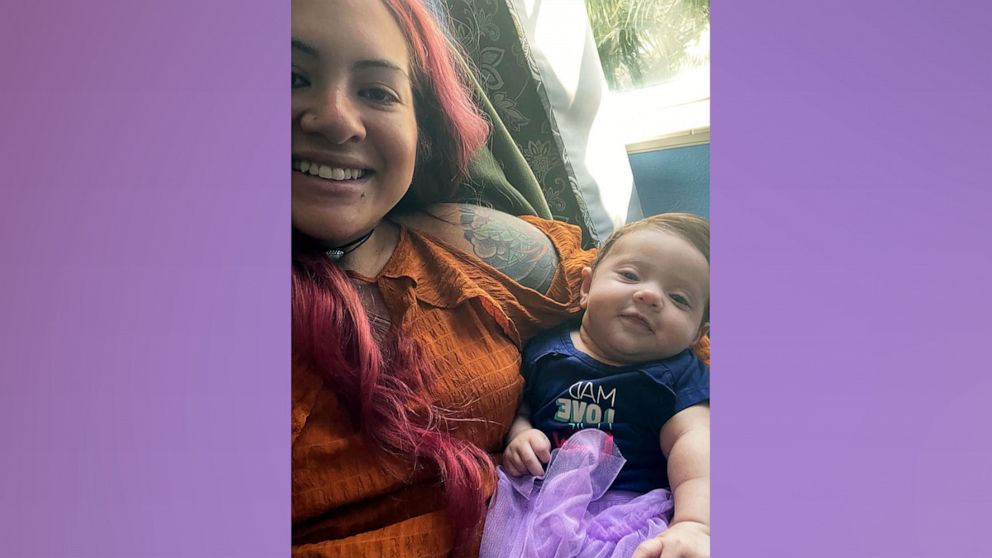 "I remember worrying what quality of life I would have and the nurses told me, 'You think this is forever? You just have to get up and move and you'll be back to normal,'" she said. "From then on, every day I was like, 'What's the plan? I want to get home to my baby.'"

On Oct. 22, 85 days after she was admitted, Gambini was able to leave the hospital to go home, where she continues to recover.

"COVID really attacked my lungs, so half of my left lung is damaged. I get winded if I walk too fast," said Gambini, who is still on oxygen. "And I lost 80 pounds so my body is rebuilding its strength." 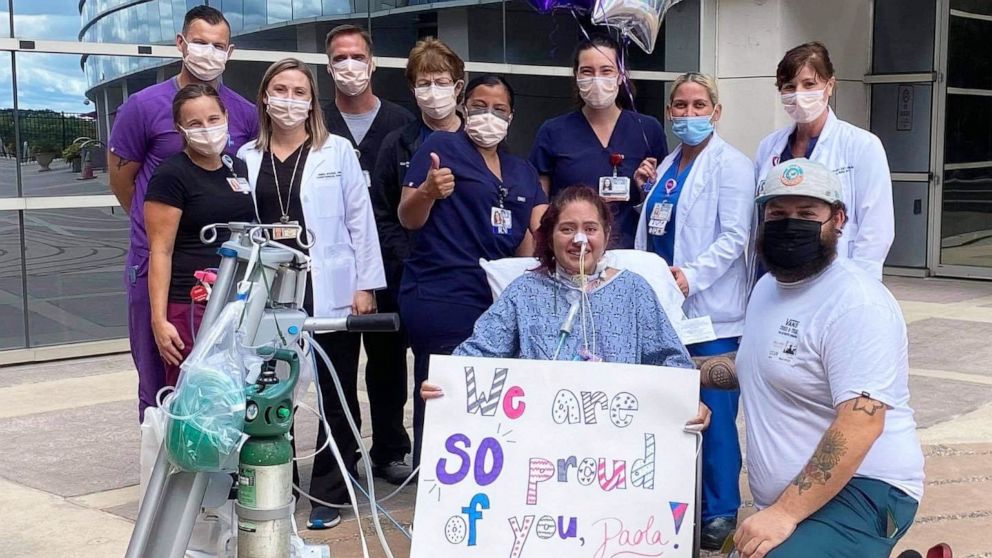 Gambini is now able to hold Lilliana, whom she describes as "such a happy baby."

"We appreciate life on a level that no one else will experience unless you go through something like this," she said. "We don't take anything for granted."