When Maria Alcoke, a mother of two in Maryland, was pregnant with her first child, she said she read every book possible on what to expect of pregnancy and how to care for her baby.

Like so many moms, Alcoke said what she was not prepared for was what would happen to her own body during and after childbirth.

"I had been completely unprepared for the postpartum experience in general, but especially after a very long labor and then a c-section," Alcoke told "Good Morning America." "Pregnancy is one thing, but postpartum and labor, those are the things that I think we have so little expectation for."

Looking back on how she felt, Alcoke recalled, "I think I described it as, 'I felt like I got hit by a bus.'"

Jenny Laroche, a Broadway and television actress who gave birth to her first child, a daughter, six months ago, recalled being so unprepared for the postpartum period that she wondered if she was going through menopause.

"Waking up in a pool of my own sweat, I was like, 'Am I menopausal? What is happening?,'" said Laroche. "There's so much I did not know [about being postpartum] until I was doing it." 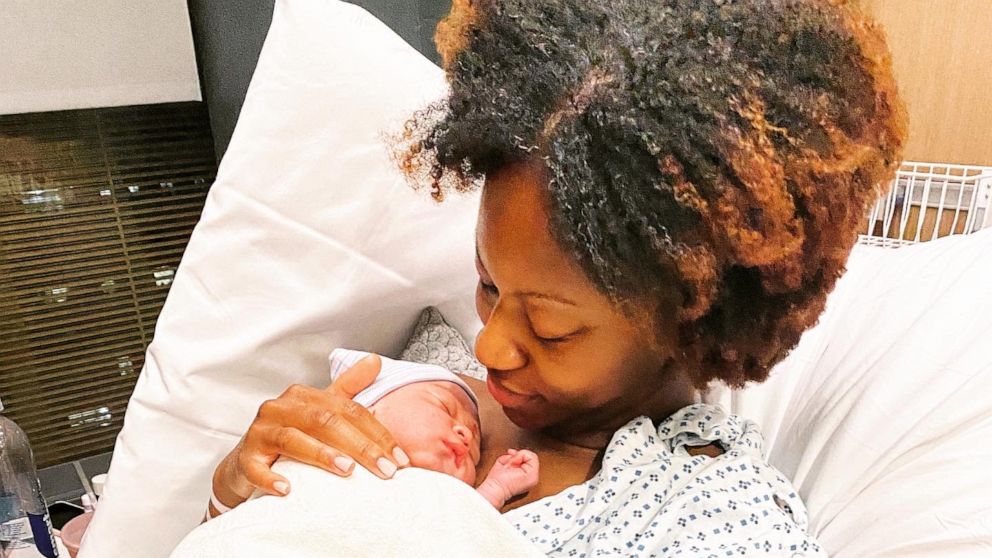 The postpartum period is defined as the time period after a person gives birth, but exactly how long it lasts remains up for debate.

The medical community has historically defined postpartum as lasting up to six weeks after childbirth, when the tissues and hormones in a person's body go back to their pre-pregnancy state, according to Dr. Meggie Smith, a board-certified OB-GYN and fertility specialist in Nashville, Tennessee.

But Smith said doctors more and more are understanding that the postpartum period lasts much longer, even referring to it as the "fourth trimester" of pregnancy.

"Now it's looking beyond just having a baby and seeing that 12 weeks after delivery is really another pretty pivotal and transformative time," she said. "Some even argue that the postpartum period lasts up until a year."

Laroche called the idea of the postpartum period ending after six weeks "totally laughable," adding, "At six weeks, I physically looked like myself .., but emotionally, mentally and internally I did not feel like myself."

MORE: Why is infertility so painful?: Doctor and patient break down taboo women's health topic

Alcoke said that, like Laroche, she too was told she could resume her normal physical activities at six weeks postpartum, which left her feeling "intimidated."

I was completely exhausted, emotionally and physically.

"I still didn't feel quite right," she said. "I was completely exhausted, emotionally and physically. There's so much that changes, it's really hard to define what that actually means as far as how long postpartum lasts." 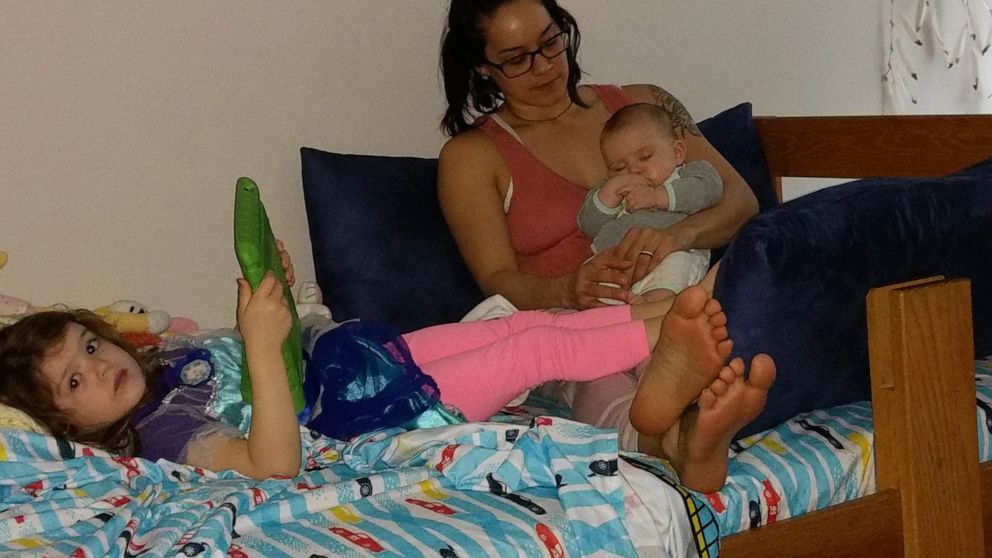 But instead of receiving orders to rest and undergo physical therapy, as you would after knee surgery, for example, people who give birth spend typically two to four nights in the hospital and then go home to care for a new tiny human being, in addition to possibly other kids and family members.

At the same time, their body is not just recovering physically, but also experiencing a shift in hormones, especially due to breastfeeding, according to Smith.

"I think people don't realize that your hormones are sort of in a menopausal state when you are breastfeeding," she said. "Because your estrogen is still so low, you can have things like hot flashes, night sweats, vaginal dryness, a lot of things that no one really talks about."

Many people breastfeed for well past six weeks, meaning those symptoms may remain well past the traditional postpartum period. And breastfeeding itself can be physically difficult for some people, causing nipple pain, plugged milk ducts, sore breasts, leaking breasts and even back, neck and wrist pain from holding a breastfeeding baby.

Breastfeeding can also be emotionally draining -- something not all new moms are prepared for since it is not frequently discussed.

Breastfeeding for me was an emotional trauma.

"I wasn't prepared for how difficult breastfeeding was going to be for me," Laroche said, adding that she struggled with wanting to breastfeed and not being able to produce milk for her daughter. "Breastfeeding for me was an emotional trauma."

"There was so much support in the hospital with breastfeeding, but none post," she said.

GoodMorningAmerica.com is tackling a different taboo women's health topic each month, breaking down stigmas on everything from mental health to infertility, STDs, orgasms and alcoholism.

The dramatic drop in hormones post-childbirth can also lead to changes in mood, leaving new parents feeling sluggish and depressed, on top of being tired.

Postpartum "baby blues," which can include anxiety, difficulty sleeping, crying and mood swings, typically last up to two weeks and occur within the first two to three days after giving birth.

Moms with postpartum depression may experience symptoms including crying, feeling restless, changes in eating and sleeping, difficulty focusing, isolating, thoughts of hurting one's self or one's baby or feeling disconnected from the baby, and should seek help from a health professional.

Alcoke said she did not have the language to label the emotions she felt after giving birth to her first child, but learned about postpartum depression in the years after, which helped prepare her for the birth of her second child.

No one is immune to those heavy and extreme emotions in postpartum.

"Every single thing that I had planned went out the window and I was having such a hard time," she said about her first postpartum experience. "I wanted control over so much and there's so little that you have control over when you have a baby ... I struggled with that for a really long time."

"But with my second, I was super aware. I knew I was going to have similar feelings, even though I did my best to manage them," said Alcoke. "I think everyone needs to know that they're not alone in that. No one is immune to those heavy and extreme emotions in postpartum."

MORE: Why women have an 'orgasm gap' and 5 myths debunked

Laroche said she was educated on postpartum depression and knew the red flags to look for, but had not heard of what she ended up experiencing, which was postpartum anxiety.

Postpartum anxiety can show up in symptoms like irritability, difficulty relaxing, poor sleep and all-consuming worries.

"It's almost like every emotion that you feel is heightened," said Laroche. "I was already an anxious person during this pandemic. I had no idea that postpartum was going to skyrocket that anxiety of caring for not just myself but this little human and feeling mom-guilt and mom-shame, all of that was just heightened." 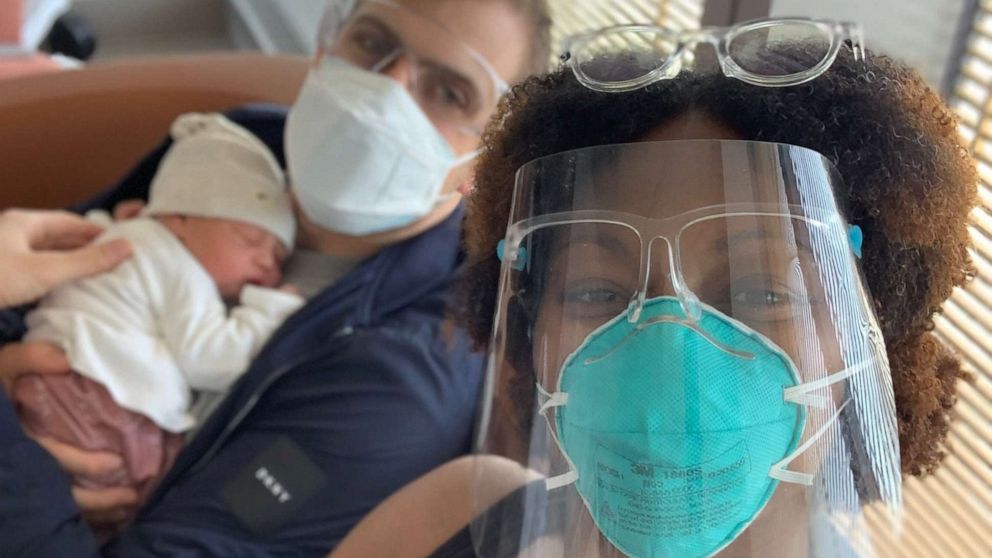 Jenny Laroche
Jenny Laroche, of New York, poses with her husband and their newborn daughter.

For Laroche, the emotional changes came with more physical changes than she expected, everything from hair loss to bowel movements.

"I had no idea that you lose so much hair. No one warned me," said Laroche, who said she felt "like a passenger in my own body" postpartum.

"I think the most traumatic thing that no one wants to share post-pushing, post-labor is this fear that I would have using the bathroom," said Laroche. "I was like, 'Oh my God. Am I going to hurt myself?' I was terrified."

While physical symptoms like hair loss and bowel movements, bleeding, vaginal pain, body aches, pains and a slow recovery -- to name a few -- are common after giving birth, they are not often discussed, so new moms sometimes feel isolated, though what they're experiencing is completely normal.

"When talking [in] women's circles and just talking with your friends and sharing experiences, you never want to scare someone away, right?," said Alcoke. "People don't necessarily want to hear that, like, 'Oh did you hear about the vaginal tear that I had?' but it's part of the process. It happens. It's super common." 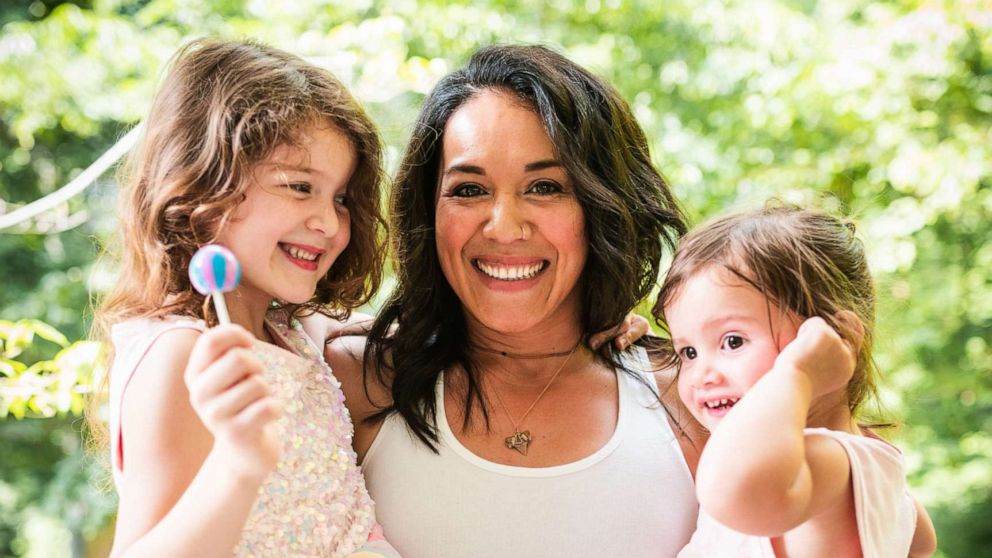 Another reason people don't always know what to expect or what's normal after giving birth is postpartum care in the United States can be lacking.

After a person gives birth, attention tends to turn to the newborn baby and the birthing person is expected to simply recover.

The organization now recommends that all postpartum people have contact with their OB-GYN or obstetrics provider within the first three weeks after delivery, and that care should continue on an ongoing basis, ending with a "comprehensive postpartum visit no later than 12 weeks after birth."

Beyond seeing their OB-GYN more frequently, Smith said she would also like to see postpartum people more frequently referred to pelvic floor physical therapists, who can help restore the pelvic floor muscles that can be stretched and sometimes damaged in childbirth.

"It's an underutilized modality that, hopefully, over the next few years, we start to have as more of a routine referral for most women who have had a baby, whether a vaginal delivery or C-section," said Smith. "I don't think women realize how common it is that you may have incontinence issues, and that you don't have to live like that. You can have someone help you with that."

Smith said her advice to postpartum people is to be prepared for the physical and emotional changes that come with giving birth, but know that not all will happen to them.

"You'll hear all of these different stories, and some of them might happen to you, but not all of them," she said. "It's important to focus at each point in the postpartum period on what's bothering you the most and what's going to help you make you feel like yourself."

"So if it's sex and that sex is painful, talk to your gynecologist about estrogen cream, or some sort of lubrication for so you can have sex, or if it's the hair issue, talking to a dermatologist or someone you can see," she said. "Pick whatever things would help you the most to get back to feeling like yourself."

Both Alcoke and Laroche said their advice to other people is to speak up and ask for help, and to speak out openly and honestly about the postpartum journey.

"It's real, and you can't really prepare for it, but hopefully our conversation helps women understand that this is pretty common. This is what we go through," said Alcoke. "And we're better for it on the other side."