Spears had been subject to a conservatorship for more than 13 years.

Both Rosengart and Spears' father and former conservator, Jamie Spears, had filed to end the conservatorship prior to Friday's hearing.

After the ruling, Rosengart told reporters that the conservatorship had been "corrupted" by Jamie Spears, whom he accused of taking a significant amount of money from the singer. In the past, Jamie Spears has denied wrongdoing.

“This is a monumental day for Britney Spears, it’s also a somber day for me, for Britney and I think for a lot of us who have been following conservatorships and how they operate," Rosengart said. "Many people have asked if we will continue to investigate Mr. Spears, and that is ultimately up to my client."

What is a conservatorship, and why did Britney Spears have one?

A conservatorship is a legal arrangement in which a guardian is placed in charge of a person's affairs when they are deemed unable to care for themselves.

After Spears was hospitalized twice for mental health issues in early 2008, a judge placed Jamie Spears and a court-appointed conservator, attorney Andrew Wallet, in charge of every aspect of the singer's life.

Wallet resigned in early 2019, and later that year, Jamie Spears stepped down as conservator of his daughter's personal affairs, citing health problems, according to reports from that time. He remained in control of her finances, and a professional fiduciary, Jodi Montgomery, was placed in charge of managing the singer's personal life.

What has Britney Spears said about the conservatorship?

Spears did not speak publicly about the conservatorship until June 2021 when she pleaded with Penny in court to end the arrangement. Calling it "abusive" and saying that it was "doing me way more harm than good," Spears said the conservatorship had left her "traumatized."

Spears also took aim at her father, whom she said should "be in jail" for the way he's treated her.

In response, a lawyer for Jamie Spears read the following statement in court: "He is sorry to hear his daughter in so much pain. Mr. Spears loves his daughter and misses her very much." 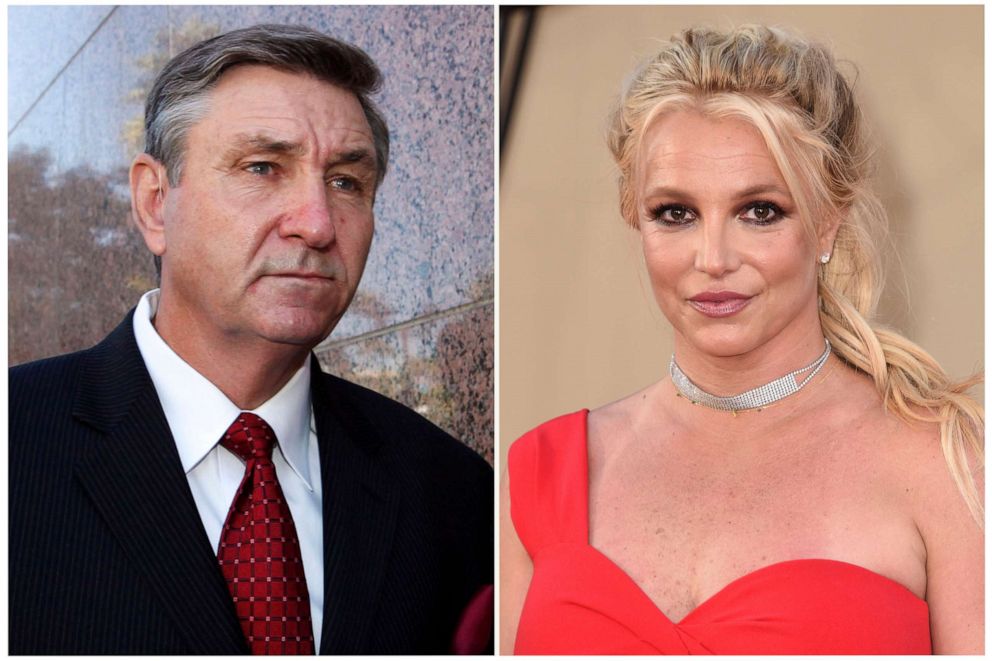 AP, FILE
In this combination of photo, Jamie Spears, father of singer Britney Spears, leaves the Stanley Mosk Courthouse on Oct. 24, 2012, in Los Angeles, left, and Britney Spears arrives at the premiere of "Once Upon a Time in Hollywood" on July 22, 2019, in Los Angeles.
Editor's Picks

When did Jamie Spears exit the conservatorship and why?

Just weeks after Rosengart filed court documents calling for his removal, Jamie Spears indicated in August that he would step down as conservator. In court documents obtained by ABC News, he stated that while he believes it is "highly debatable whether a change in conservator at this time would be in Ms. [Britney] Spears' best interests," he was prepared to remove himself from the arrangement.

"Even as Mr. Spears is the unremitting target of unjustified attacks, he does not believe that a public battle with his daughter over his continuing service as her conservator would be in her best interests," the paperwork stated. "So, even though he must contest this unjustified Petition for his removal, Mr. Spears intends to work with the Court and his daughter's new attorney to prepare for an orderly transition to a new conservator."

Rosengart told ABC News in a statement that it was a "vindication for Britney," but added that his fight wasn't over.

"We look forward to continuing our vigorous investigation into the conduct of Mr. Spears, and others, over the past 13 years, while he reaped millions of dollars from his daughter's estate, and I look forward to taking Mr. Spears's sworn deposition in the near future," he said.

In September, after Jamie Spears filed to end the conservatorship, Penny suspended him from the arrangement, citing a "toxic environment." Certified public accountant John Zabel was appointed as the temporary conservator of her estate, as requested by Spears' attorney.

What's next for Britney Spears?

Spears said in her June testimony that she wants to "get married and have a baby," and in September, she announced her engagement to actor Sam Asghari.

Soon thereafter, Rosengart acknowledged in a court filing that attorneys want to iron out a prenuptial agreement on her behalf, and the next month, the singer asked her fans where her wedding should take place.