Meghan, the Duchess of Sussex, spoke on Monday at the One Young World Summit in Manchester, England, encouraging attendees to work at solving hard issues "now" in order to help build a better world for future generations.

The annual event, which brings together young leaders from across the globe to address pressing issues within topics such as health care, the environment and social change, takes place across several days at "various venues across the city," according to the event website.

The duchess, who has appeared at past summits, delivered a keynote speech this year, addressing attendees at the event's opening ceremony at Bridgewater Hall.

It was her first time speaking publicly in the U.K. since she and husband Prince Harry, who appeared onstage with Meghan at Monday's event, stepped down from their roles as senior working royals.

"It was several years ago in 2014 that I was first invited to be a counselor at One Young World, and in many ways at the time ... I was probably a lot like you," she said, recalling her feelings of uncertainty at the time.

"The truth was, I wasn’t sure that I belonged. … But One Young World saw in me what I wanted to see fully in myself. They saw in me, just as I see in you, the present and the future."

She emphasized that while many focused on the last part -- the future -- the present was in many ways more important. Too often, she said, society tends to neglect the importance of the work young people are doing now.

"You here, in this present moment, this is where it’s all beginning," she said. 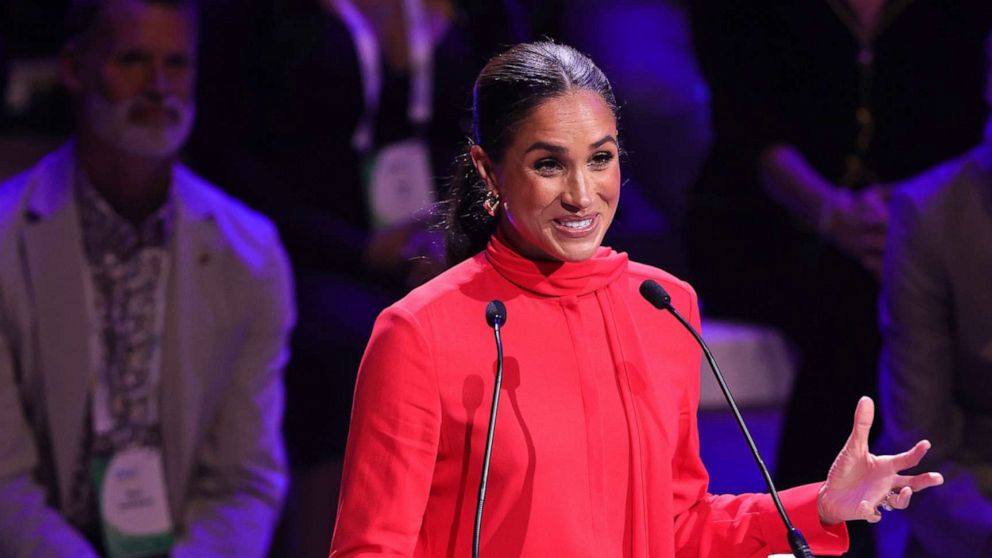 Chris Jackson/Getty Images
Meghan, Duchess of Sussex makes the keynote speech during the Opening Ceremony of the One Young World Summit 2022 at The Bridgewater Hall, Sept. 5, 2022, in Manchester, England.

Meghan also applauded the young leaders' commitment to a more diverse and inclusive society. "Earlier this afternoon we sat down with a few of you delegates, and it was incredibly inspiring the resounding themes that came up -- about representation, about inclusion, about access, and about trying to shift the global perspective for all of us as a global community to one of curiosity over criticism," she said.

She cited Harry's past work on issues affecting youth, adding that she was "thrilled that my husband is able to join me here this time, to be able to see and witness firsthand my respect for this organization and all that it provides and accomplishes."

"For both of us, bearing witness to the power that you hold in your hands, and the unbridled enthusiasm and energy that you have to see things come to fruition, it is just an absolute privilege," she said.

"I'm incredibly humbled to not just stand before each of you, but to stand beside you," she continued. "We often hear people say 'The time is now,' but I’m going to double down on that by saying 'your time is now.' The important work can't wait for tomorrow. And this week, the world is watching as you cement your place in history by showcasing the good that you are doing today, in the present moment, as we embrace the moment of now to create a better tomorrow."

One Young World first announced Meghan's keynote speech in mid-August, noting that both she and Harry would also be meeting with a group of summit delegates "doing outstanding work on gender equality during the multi-day event.

"We're delighted to announce Meghan and Harry, the Duke and Duchess of Sussex will be attending the One Young World Summit in Manchester this September!" One Young World tweeted at the time.

In a separate tweet, One Young World noted that Meghan "has been a proud #OYWCounsellor since 2014."

Meghan issued a statement through the organization at the time, expressing excitement for the upcoming summit.

"When I was asked to be a Counsellor at One Young World my response was a resounding yes!" she said.

"One Young World invites young adults from all over the world who are actively working to transform the socio-political landscape by being the greater good," she continued. "They are delegates who are speaking out against human rights violations, environmental crises, gender equality issues, discrimination and injustice. They are the change."

The duchess has been an advocate of gender equality and women's rights for many years. In September 2019, she posted a personal message on the topic from the official @SussexRoyal Instagram account, following a meeting with "a group of women ranging from a legendary anti-apartheid activist, female parliamentarians, professors, educators and policy makers," during a royal tour of several African nations. 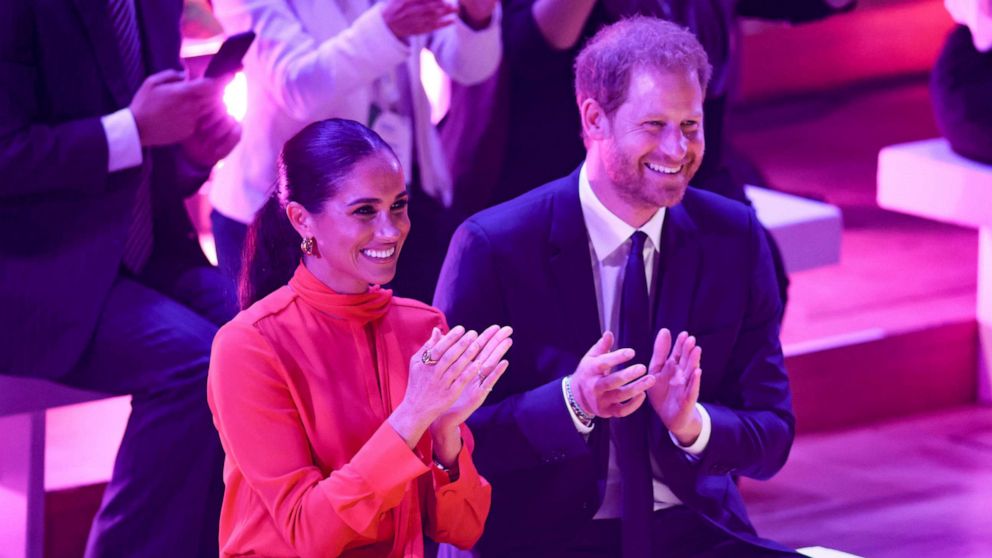 Chris Jackson/Getty Images
Meghan, Duchess of Sussex and Prince Harry, Duke of Sussex clapping during the Opening Ceremony of the One Young World Summit 2022 at The Bridgewater Hall, Sept. 5, 2022 in Manchester, England.

"Issues of gender inequality affect women throughout the world, independent of race, color, creed, or socioeconomic background," she wrote in part. "... In sitting down with these forward thinkers, it was abundantly clear - it is not enough to simply hope for a better future; the only way forward is 'hope in action.'"

The family will stay at Frogmore Cottage, their home on the queen's Windsor estate, while in the U.K. The queen herself is currently at Balmoral Castle in Scotland preparing to appoint her 15th prime minister, Liz Truss, who won the Conservative Party leadership election Monday to replace outgoing prime minister Boris Johnson, whose premiership ends on Tuesday. It is unclear whether Meghan and Harry will visit the queen while in the U.K.

The pair are headed next to Dusseldorf, Germany, where Harry will deliver remarks on the "one year out" countdown to the Invictus Games before returning to London on Thursday for the WellChild Awards, which recognize "seriously ill" children and their families. The couple will then return home to Montecito, California, where they reside currently with their children Archie and Lilibet. The family moved there in June 2020, just a few months after announcing their plans to "step back as senior members of the Royal Family" and divide their time between the U.K. and the U.S.

The couple formally announced they would not be returning to their roles as senior working royals in February 2021.

Harry and Meghan's trip to the U.K. comes one week after Megan opened up about the couple's decision to leave the U.K., in an interview with The Cut. 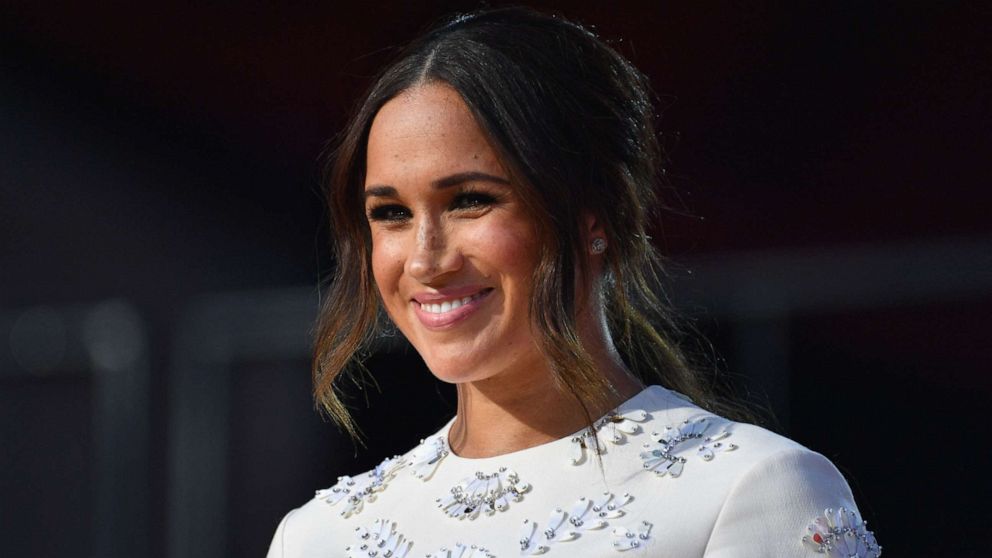 According to the duchess, pressure from tabloid stories attacking them, oftentimes "under the guise of public interest" -- or taxpayers footing the bill for a royal lifestyle, in other words -- along with racist commentary and "allegedly" true rumors, became too much and was taking a toll on her mental health. At one point, she said she suggested the couple be allowed to work to make their own money. "Then maybe all the noise would stop," she recalled thinking.

Exiting the U.K. and starting a new life elsewhere was one part of their eventual solution, she said. "Anything to just … because just by existing, we were upsetting the dynamic of the hierarchy. So we go, 'Okay, fine, let’s get out of here. Happy to,' " she said.

Meghan also said that, despite the things she's been open about in the past, regarding her time in the U.K., she's kept a lot to herself. "It’s interesting, I’ve never had to sign anything that restricts me from talking. I can talk about my whole experience and make a choice not to," she said, noting that she's "still healing" from the experience.

"I think forgiveness is really important. It takes a lot more energy to not forgive," she added. "But it takes a lot of effort to forgive. I’ve really made an active effort, especially knowing that I can say anything."

According to ABC News royal contributor Omie Scobie, the royal family "will have no doubt been bracing themselves" for Meghan and Harry's U.K. visit, given Meghan's recent revelations, as well as her comments in The Cut, "but for the Sussexes this is very much about the work."

"These are the kinds of trips they wanted to do ever since they stepped back, but the pandemic prevented them from doing so until now," Scobie added.