Twenty-five years after her death, the legacy of the late Diana, Princess of Wales, endures across the world.

Diana died in a car crash on Aug. 31, 1997, at the age of 36, while fleeing the paparazzi in Paris. Her death prompted worldwide mourning and messages of condolences from leaders across the globe.

On Wednesday, Diana's sons Prince William and Prince Harry will mark the 25th anniversary of their mother's death privately with their families, sources close to both princes confirm to ABC News.

Harry spoke recently about the anniversary at a charity event in Aspen, Colorado.

MORE: Prince Harry honors late mom's legacy: 'Every day I hope to do her proud' 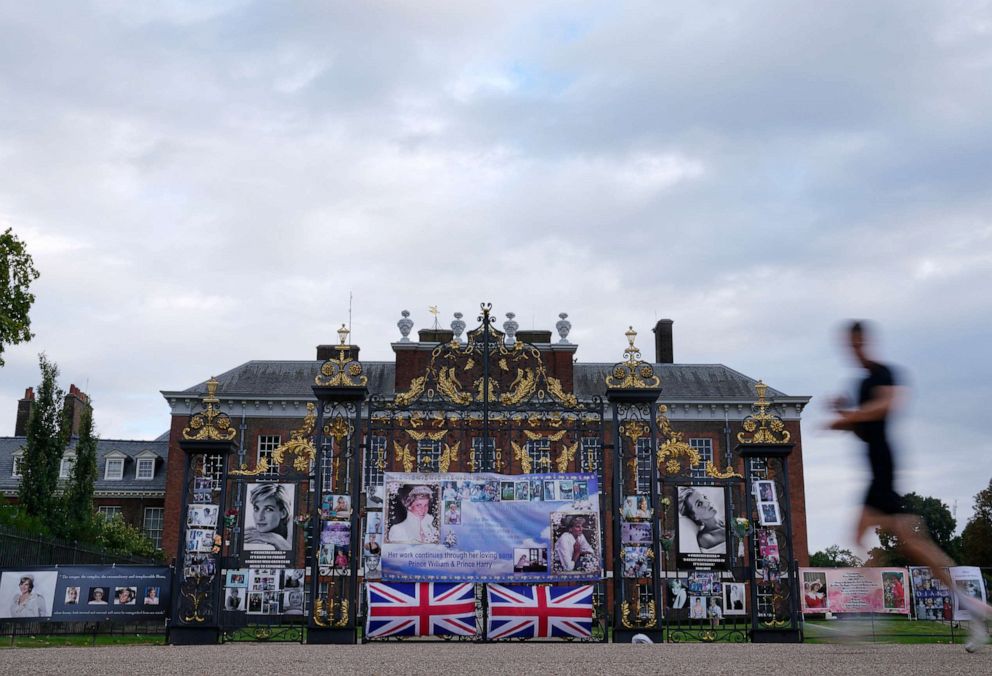 Alastair Grant/AP
A man runs by portraits of Princess Diana displayed on the gates of Kensington Palace, in London, Aug. 30, 2022.

Diana's legacy, including her charity and advocacy work, lives on both in books and popular media as well as in the minds of those who remember her.

"She was an incredible lady who changed the world for the better," ABC News royal contributor Robert Jobson said while reflecting on Diana's legacy with "Good Morning America." 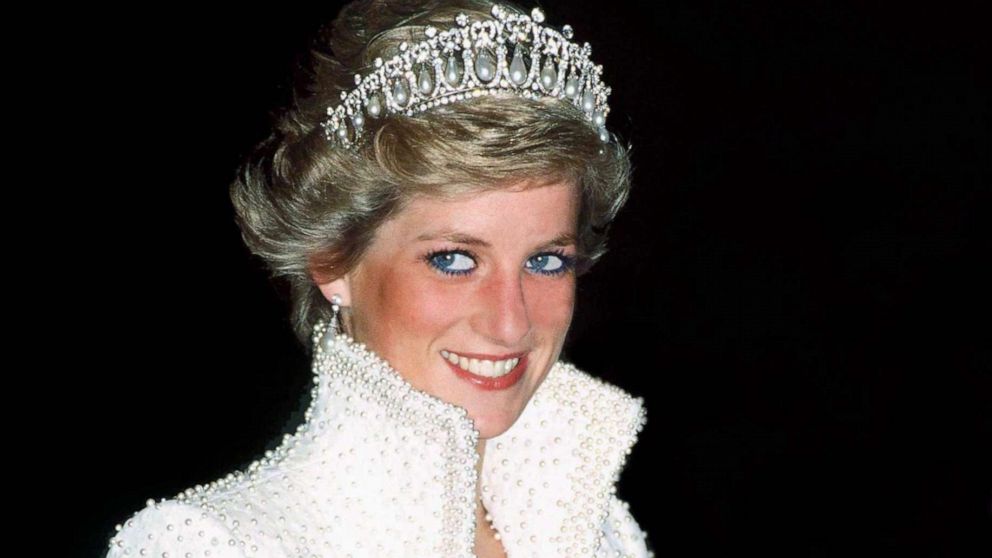 Unlike royals before her, many felt that Diana had a unique way of connecting with those around her. In the years before her tragic death, she touched countless lives and helped give a voice to the voiceless.

Whether it was visiting hospices and schools, meeting with those who were dying or comforting victims of active land mines, Diana prioritized those who were in need, making them feel seen and heard. 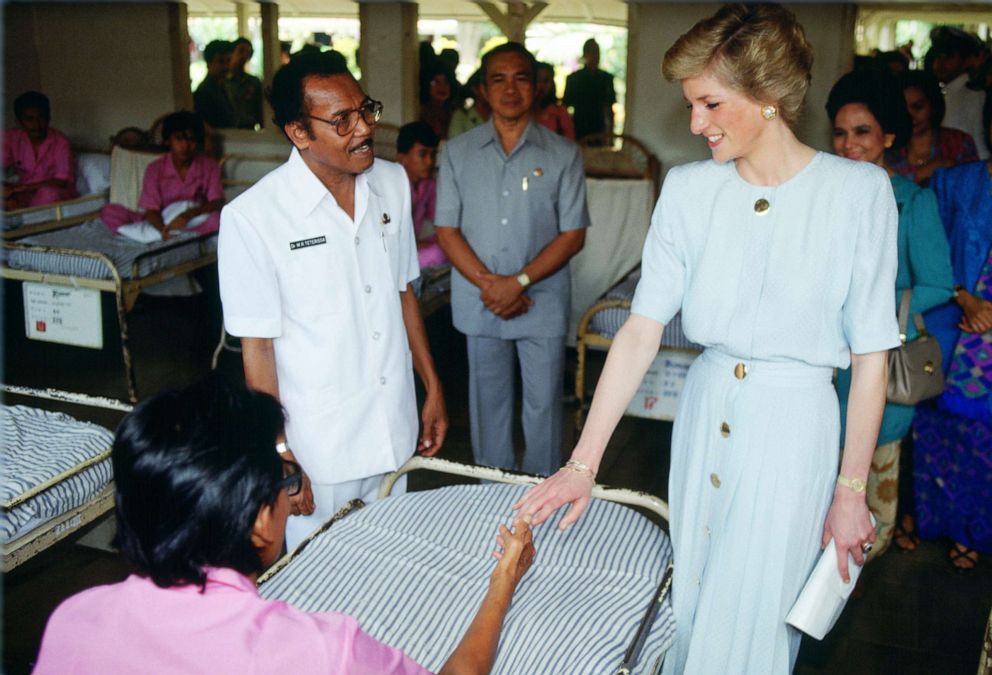 "I make the trips at least three times a week, and spend up to four hours at a time with patients holding their hands and talking to them," Diana once said about her work with the Royal Brompton Hospital, London, according to the charity organization The Diana Award. "Some of them will live and some of them will die, but they all need to be loved while they are here. I try to be there for them."

Diana's commitment to caring for others manifested itself early on, when she was a young girl attending West Heath Girls' School in Sevenoaks, Kent. According to the royal family's official website, Diana was given her school's award for the "girl giving maximum help to the school and her schoolfellows." 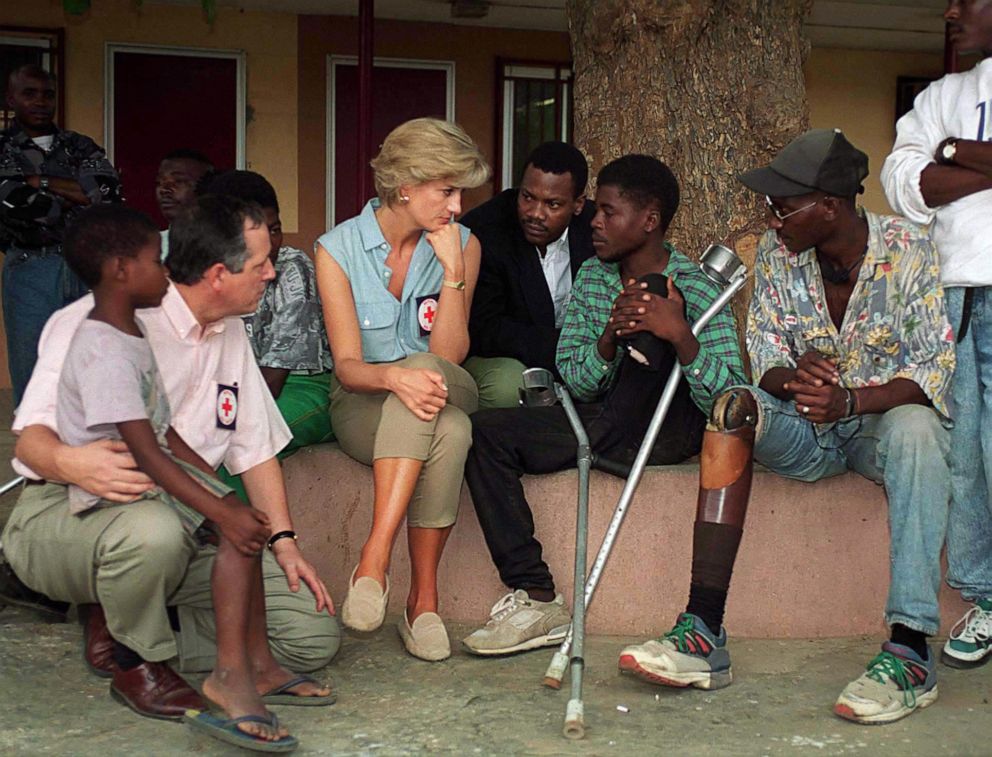 While being involved with philanthropic causes has always been part of the royal family's duties, Diana took things a step further, traveling the world to refugee camps and soup kitchens and making sure she was present wherever there was great need.

One particularly memorable moment came in 1987, when Diana famously challenged the stigma surrounding AIDS by shaking hands with a terminally ill AIDS patient during a visit to London's Middlesex Hospital. The interaction was brief but proved to the public that HIV/Aids was not passed from person to person through touch, a common misconception at the time.

MORE: Diana: Remembering the 'People's Princess' 16 Years After Her Death

Diana's humanitarian efforts and empathy prompted former Prime Minister Tony Blair to describe her as "The People's Princess" while paying tribute to her following the news of her death.

"She was a wonderful and a warm human being, although her own life was often sadly touched by tragedy," Blair said at the time. "She touched the lives of so many others in Britain and throughout the world with joy and with comfort. How many times shall we remember her in how many different ways -- with the sick, the dying, with children, with the needy? With just a look or a gesture that spoke so much more than words, she would reveal to all of us the depth of her compassion and her humanity." 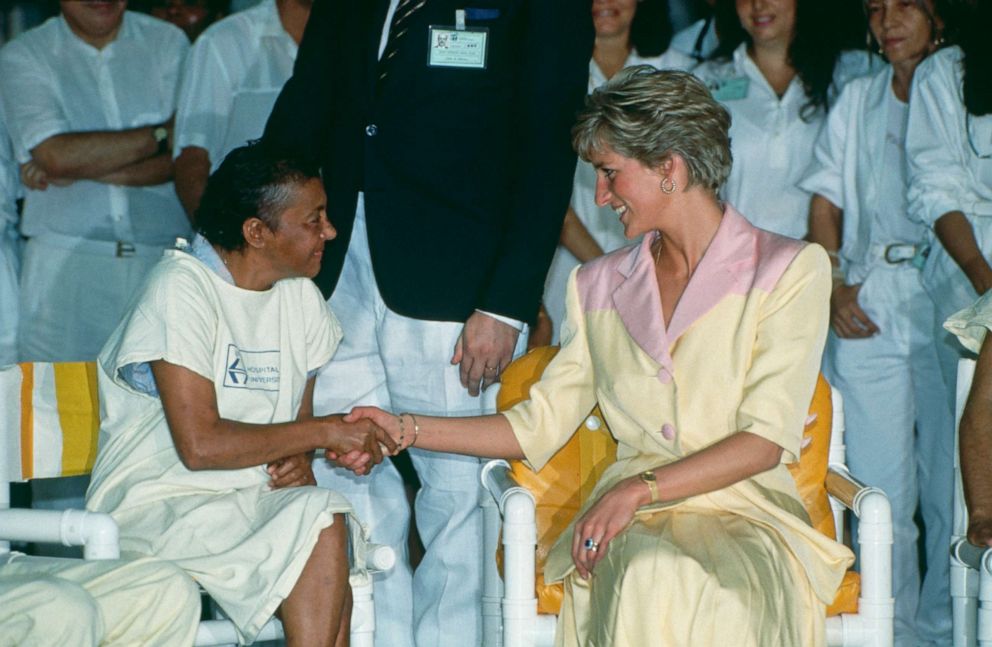 In addition to her humanitarian efforts, Diana saw her most important role as being a mother.

She made it a priority to give both William and Harry as much of a normal life as possible. Many believed she broke the mold of royal motherhood in the process. 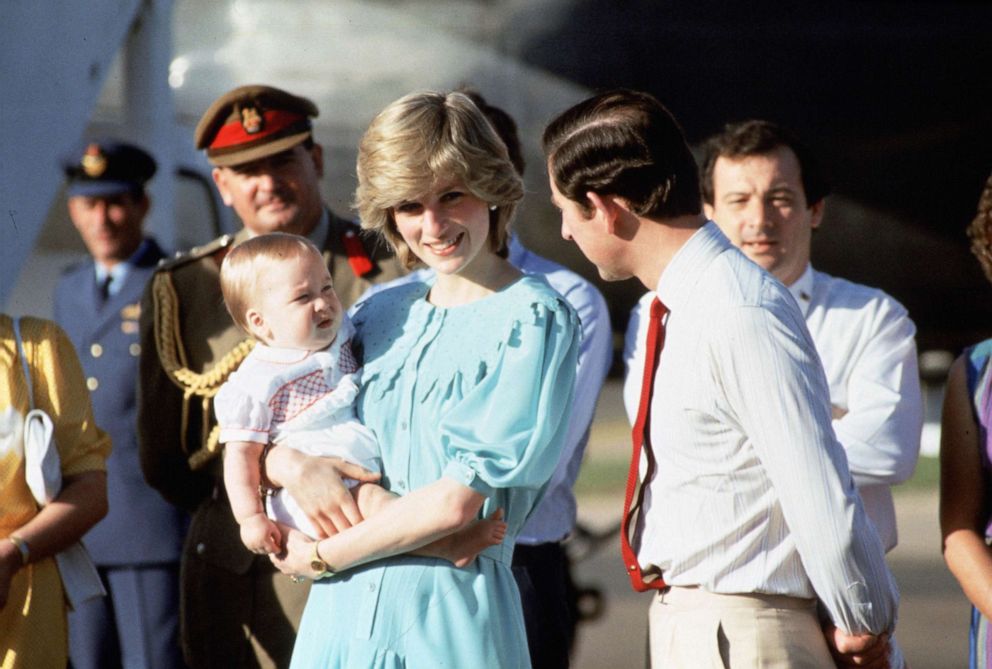 From visiting Disney World, to going to the movies, to sending William and Harry to school outside palace walls instead of to a governess, Diana set her own course and rebelled against the parenting precedents which she felt did not suit her or her sons.

In one famous instance, Diana insisted on bringing 9-month-old William with her on an official visit to Australia, instead of leaving him with nannies while she toured the Commonwealth.

MORE: Diana: The life of a princess

"She was very informal and really enjoyed the laughter and the fun," William said in the 2017 documentary "Diana, Our Mother: Her Life and Legacy." "But she understood that there was a real life outside of palace walls." 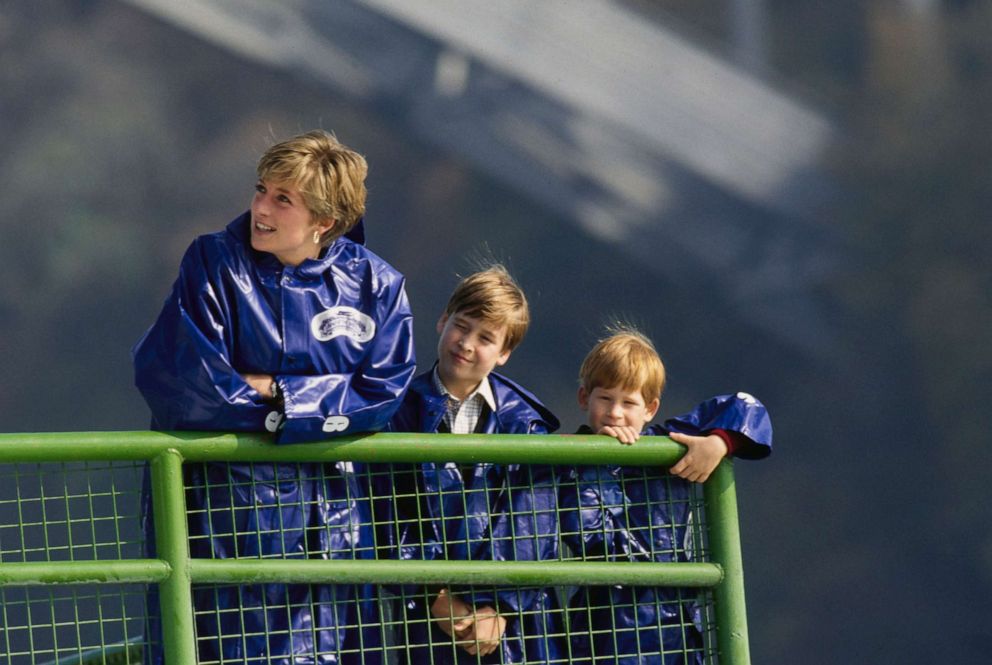 Tim Graham Photo Library via Getty Images
Princess Diana and her sons, Prince William and Prince Harry, during a private ride aboard the 'Maid of the Mist' sightseeing boat tour of Niagara Falls, Ontario, Canada, Oct. 26, 1991.

Some may recall a video of Diana in 1991, taking part in a foot race during a field day at Wetherby School, a boys school in London that both William and Harry attended. In it, Diana is seen giving her all in the race with other parents, her blazer and skirt blowing around in the wind.

0:00
A video of Princess Diana is super popular online ahead of Mother's Day.
MORE: Princess Diana was the most competitive mom in this race at Princes William, Harry's school

William and Harry's upbringing greatly influenced the way they raise their own children.

William and his wife Kate, the Duchess of Cambridge, enrolled their children Prince George, Princess Charlotte and Prince Louis in school at an early age. It was announced recently that all three will attend a new school together, after the family moves to Windsor. 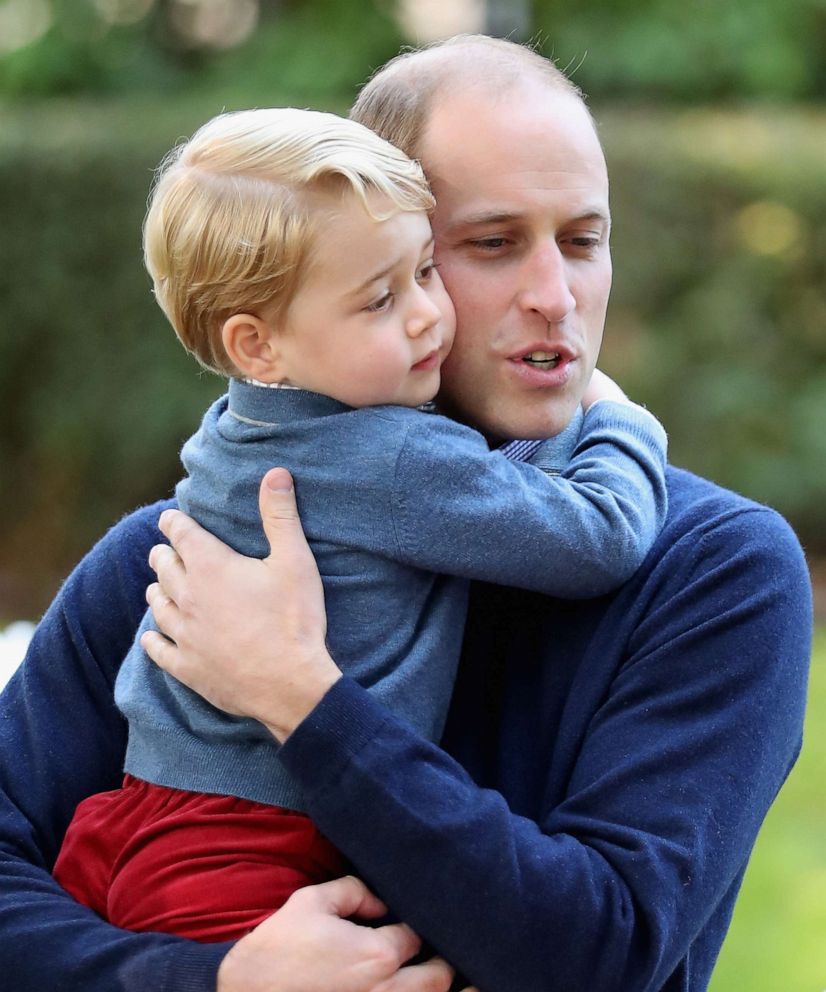 Chris Jackson/Pool via Getty Images
Prince George of Cambridge with Prince William, Duke of Cambridge at a children's party for Military families during the Royal Tour of Canada, Sept. 29, 2016, in Victoria, Canada.

In June, Charlotte and George were all smiles as they celebrated their great grandmother Queen Elizabeth II's Platinum Jubilee, which marked her 70th year on the throne. Louis also stole the show during the traditional Trouping the Color ceremony, making silly faces and covering his ears during the military flyover, much to the public's delight. 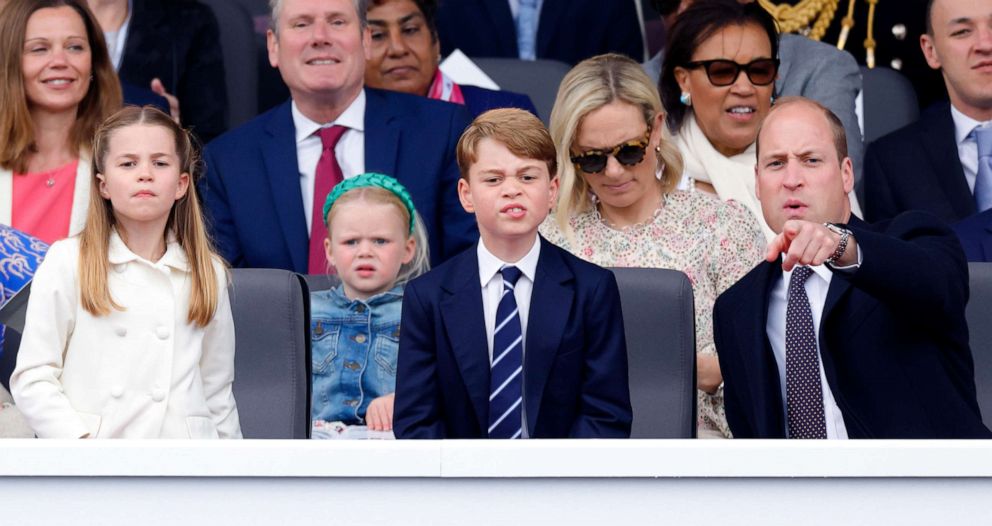 Harry and his wife Meghan, the Duchess of Sussex, have also modeled their parenting style after that of Diana, choosing to raise their two children Archie and Lilibet in California, after stepping away from their roles as senior working royals in 2020.

"The highlight for me is sticking him on the back of the bicycle in his little baby seat and taking him on these bike rides, something which I never was able to do when I was young," Harry told Oprah in an interview last year about raising Archie in California.

The family have also gravitated toward more low-key get-togethers when possible. Photos from Lilibet's 1st birthday party, which was held at at Frogmore Cottage, the Sussexes' home in the U.K., during the Jubilee weekend in June, showed a pared down celebration, with a representative for the family describing it as a casual, backyard picnic attended by close friends and family. The children enjoyed face paint and and cake, according to U.K.-based photographer Misan Harriman, who attended the gathering. 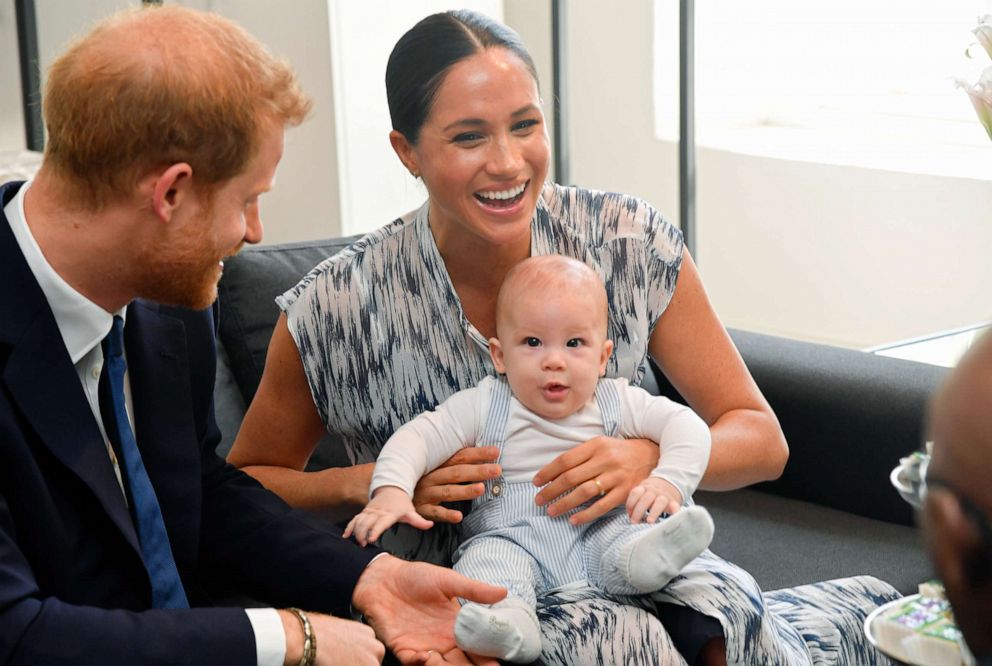 In addition to giving William and Harry a normal life, Diana also made sure to introduce them to those who were going through difficult times in hospitals and homeless shelters.

"I want my boys to have an understanding of people's emotions, their insecurities, people's distress and their hopes and dreams," Diana once said. 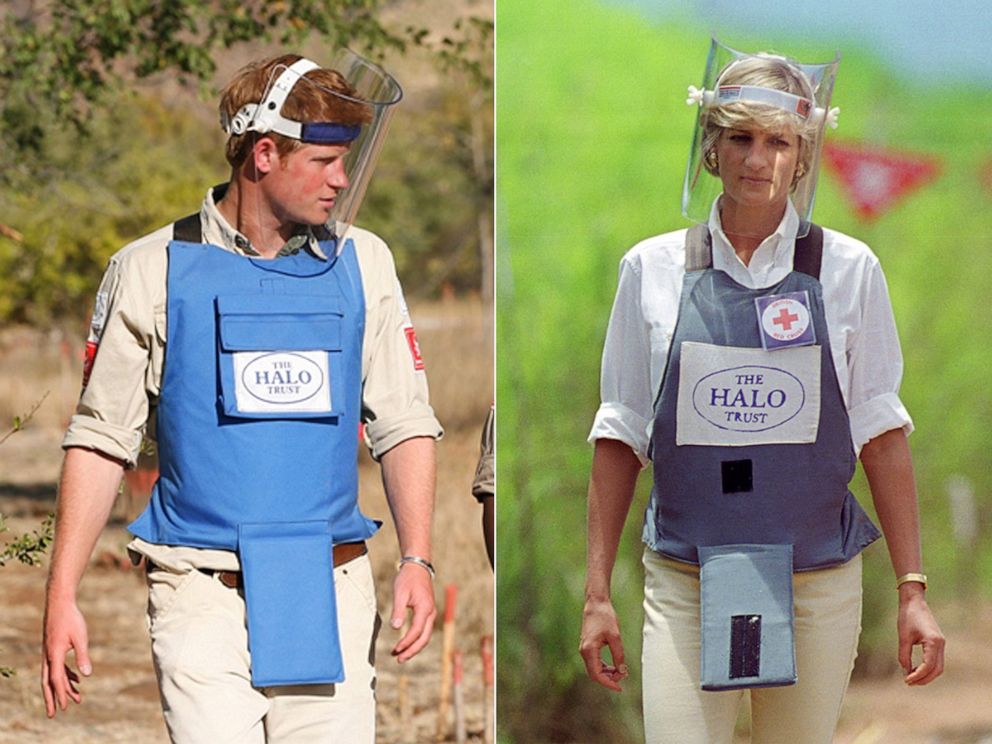 Diana's legacy lives on in her sons who have followed closely in her footsteps, shining a spotlight on the issues that mattered most to her, including homelessness, HIV/AIDS and helping children and young people. They are also patrons of Diana's many former charities. 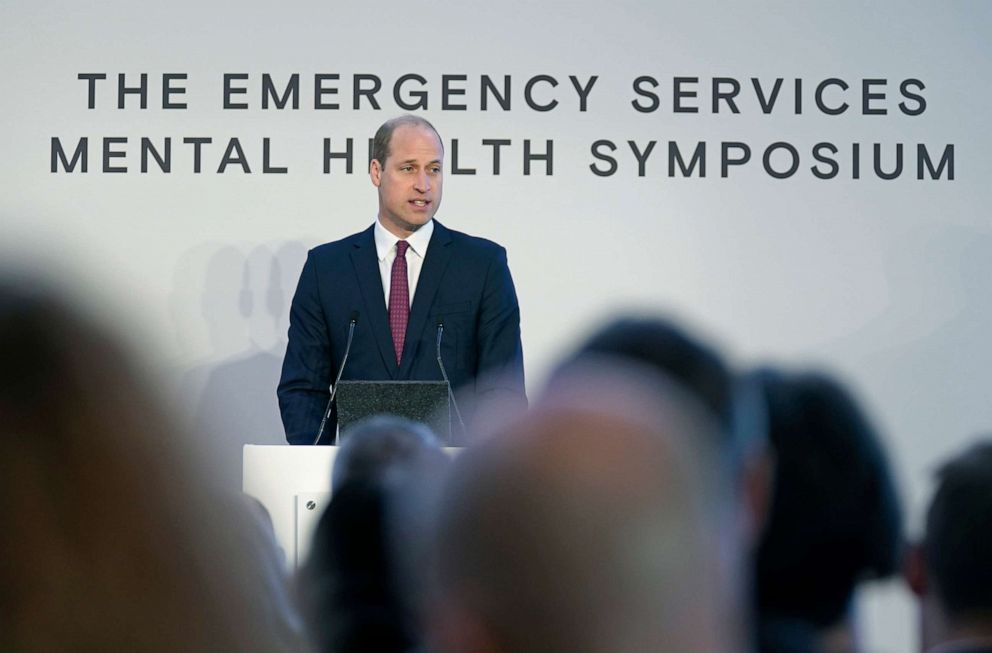 Both William and Harry have made issues of mental health a special priority. In 2017, William campaigned for mental health awareness and told British GQ how it had taken him 20 years to process his mother's death.

Harry, who last year became the chief impact officer for BetterUp, a Silicon Valley startup focused on coaching and mental health, has sought to downplay the stigma surrounding the issue, opening up about his own mental health struggles and how therapy has helped him. 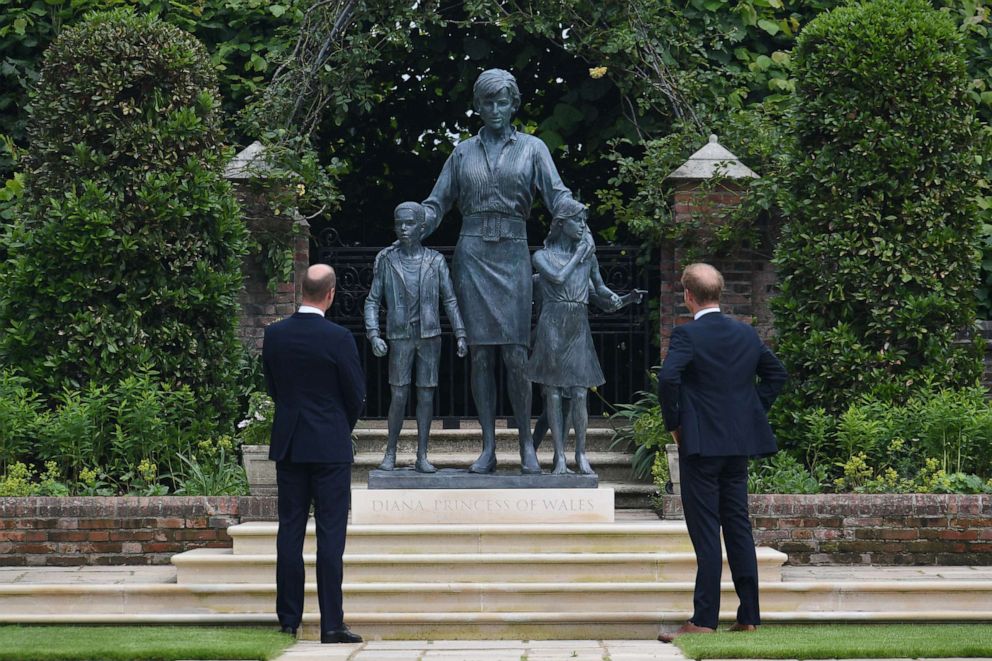 WPA Pool/Getty Images
Prince William and Prince Harry look at a statue they commissioned of their mother Diana in the Sunken Garden at Kensington Palace, on what would have been her 60th birthday, July 1, 2021, in London.

Together, William and Harry are continuing their mother's work by awarding young people around the world with the Diana Award, an annual honor bestowed on those working to change society for the better.

MORE: Statue of Princess Diana coming to Kensington Palace on what would be her 60th birthday

"My mother instilled in me and in all of us a drive to speak up and fight for a better world," Harry said in a video last month honoring the 180 2022 Diana Award recipients. "Now as a husband and a parent, my mother's voice is even stronger in my life. All of you have kept her voice alive by showing the world how each small action counts, how kindness is still valued, and how our world can be better if we choose to make it so."