Prince Harry, the Duke of Sussex, has described his "awakening" on the issue of racial inequality since meeting his wife Meghan, the Duchess of Sussex, who is bi-racial.

“Because I wasn’t aware of so many of the issues and so many of the problems within the U.K. and also globally as well. I thought I did but I didn’t," Harry, 36, told The Evening Standard, a U.K.-based newspaper. “You know, when you go into a shop with your children and you only see white dolls, do you even think: ‘That’s weird, there is not a black doll there?’"

He went on, "And I use that as just one example of where we as white people don’t always have the awareness of what it must be like for someone else of a different colored skin, of a black skin, to be in the same situation as we are where the world that we know has been created by white people for white people."

Harry and Meghan, who now live in Santa Barbara, California, granted a rare joint interview to The Evening Standard to mark the start of Black History Month in the U.K. The couple participated in a video interview and wrote an op-ed for the paper as well as releasing their list of Black History Month NextGen Trailblazers "recognized for challenging prejudice and their positive contribution to British society," according to the newspaper.

Always a joy to put something positive on your front page. Harry and Meghan zoomed us from Los Angeles on our BHM Next Gen Trailblazers. Huge thanks to Standard team, Associate Editor Jack Lefley, Abbianca Makoni, Lizzie Edmonds & J Prynn and Radhika Aligh @standardnews pic.twitter.com/6qX6C2VpAm

“It is not about pointing the finger, it is not about blame. I will be the first person to say, again, this is about learning. And about how we can make it better," Harry said about race relations in his home country. "I think it is a really exciting time in British culture and British history, and in world culture. This is a real moment that we should be grasping and actually celebrating. Because no one else has managed to do this before us.”

Meghan, a California native who lived in the U.S. and Canada before marrying Harry in 2018, also spoke about the Black Lives Matter protests that started in the U.S. after the death of George Floyd, a black man killed while in police custody in Minneapolis on Memorial Day.

Meghan said the protests have been “inflammatory for a lot of people," adding, “But when there is just peaceful protest and when there is the intention of just wanting community and just wanting the recognition of equality, then that is a beautiful thing. While it has been challenging for a lot of people certainly having to make this reckoning of historical significance that has got people to the place that they are, that is uncomfortable for people. We recognize that. It is uncomfortable for us.” 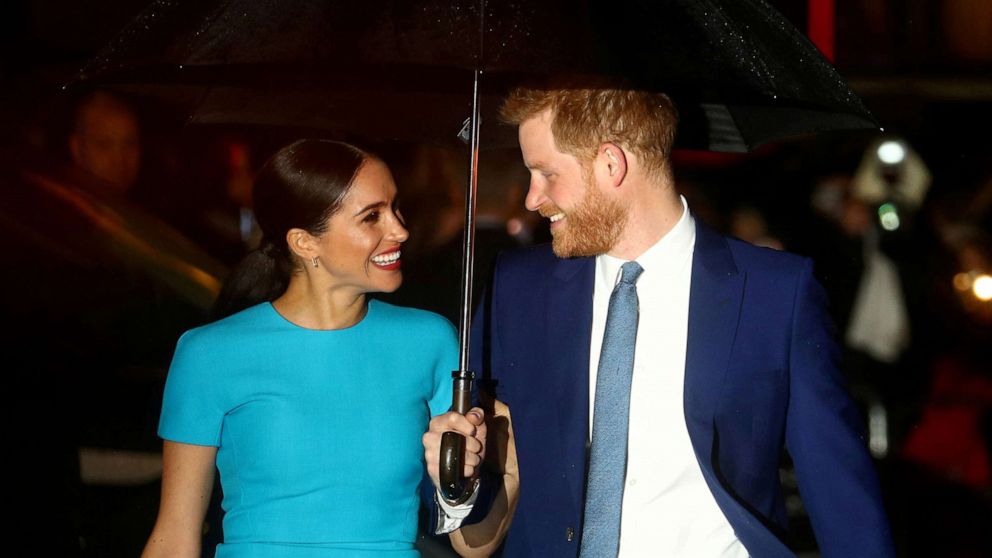 Meghan spoke out about Floyd's death in a graduation speech she gave in June to her high school alma mater, telling graduates that "George Floyd's life mattered" as do the lives of "so many other people whose names we know and whose names we do not know."

In their op-ed, the Sussexes call for an end to "structural racism" to make a more equal society.

“For as long as structural racism exists, there will be generations of young people of color who do not start their lives with the same equality of opportunity as their white peers," they wrote. "And for as long as that continues, untapped potential will never get to be realized."

Since moving to the U.S. earlier this year, Harry and Meghan have made several outings in Los Angeles for charity and given speeches. More recently, the pair made headlines when they appeared in a video urging people to vote and calling the 2020 election the "most important of our lifetime."

“It’s time to not only reflect, but act.” This #NationalVoterRegistrationDay, join #Time100 alumni Harry and Meghan, the Duke and Duchess of Sussex, in taking action for the future. pic.twitter.com/JerXHxiZK3

Harry said he and Meghan want to use their platform now to "actually start a conversation and introduce people to the black community that are making a massive difference within their own communities and across the U.K. as a whole as well.”

When Harry and Meghan were dating in 2016, Harry, who is sixth in line to the British throne, lambasted the "abuse and harassment” of Meghan, whose mother is Black and father is white, in the press and criticized “racial undertones” in some coverage of her.

The duke also spoke about the need to tackle institutional racism in a speech he gave in July for the Diana Awards, a charity that honors his late mother, Princess Diana.

“My wife said recently that our generation and the ones before us haven’t done enough to right the wrongs of the past,” Harry said, adding that institutional racism is still "endemic" in society today, according to The Associated Press. “I, too, am sorry — sorry that we haven’t got the world to the place that you deserve it to be.”