Prince Harry and Meghan, the Duke and Duchess of Sussex, have decided to take legal action against a British tabloid for what they allege was an invasion of privacy.

Harry, whose mother, Princess Diana, died in a car crash in 1997 while being chased by paparazzi, delivered a passionate statement announcing the legal move.

In it, he describes Meghan, whom he wed last year, as "one of the latest victims of a British tabloid press that wages campaigns against individuals with no thought to the consequences."

"Though this action may not be the safe one, it is the right one. Because my deepest fear is history repeating itself," Harry said. "I've seen what happens when someone I love is commoditised to the point that they are no longer treated or seen as a real person. I lost my mother and now I watch my wife falling victim to the same powerful forces."

The tabloid targeted in the lawsuit, the Mail on Sunday, published a letter in February it claimed was one Meghan wrote to her estranged father, Thomas Markle, after he missed her May 2018 wedding to Harry.

The couple's wedding led to Meghan's estrangement with her father, who bowed out of walking Meghan down the aisle at St. George's Chapel amid a paparazzi scandal and a reported heart attack. 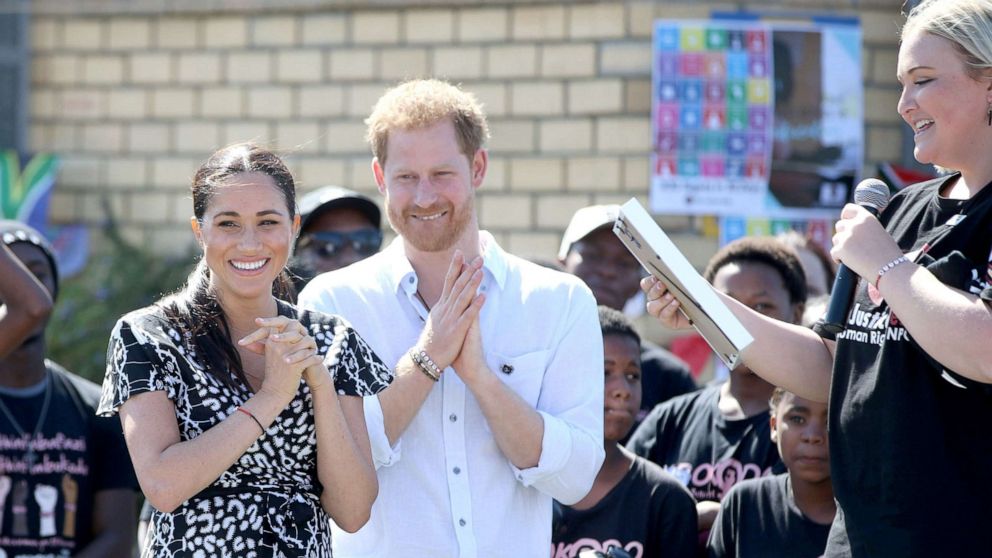 ALPR/AdMedia/SIPA via Newscom
Prince Harry Duke of Sussex and Meghan Markle Duchess of Sussex during a visit to the Justice desk, an NGO in the township of Nyanga in Cape Town, South Africa as they begin their tour of the region, Sept 26, 2019.

"We have initiated legal proceedings against the Mail on Sunday, and its parent company Associated Newspapers, over the intrusive and unlawful publication of a private letter written by the Duchess of Sussex, which is part of a campaign by this media group to publish false and deliberately derogatory stories about her, as well as her husband," Meghan's lawyers said in a statement Tuesday. "Given the refusal of Associated Newspapers to resolve this issue satisfactorily, we have issued proceedings to redress this breach of privacy, infringement of copyright and the aforementioned media agenda."

Harry said more about the letter in his statement, accusing the Mail on Sunday of omitting "paragraphs, specific sentences, and even singular words" and publishing it "unlawfully in an intentionally destructive manner to manipulate you, the reader, and further the divisive agenda of the media group in question."

A Mail on Sunday spokesman released a statement, saying, "The Mail on Sunday stands by the story it published and will be defending this case vigorously. Specifically, we categorically deny that the duchess's letter was edited in any way that changed its meaning."

The legal action was announced as Harry, Meghan and their nearly 5-month-old son, Archie, are currently in South Africa, wrapping up a 10-day tour of the country.

Harry called out the mostly glowing coverage of the family's South Africa tour as an example of the "double standards" of the British tabloid press.

"The positive coverage of the past week from these same publications exposes the double standards of this specific press pack that has vilified her almost daily for the past nine months; they have been able to create lie after lie at her expense simply because she has not been visible while on maternity leave," he said. "She is the same woman she was a year ago on our wedding day, just as she is the same woman you've seen on this Africa tour."

The Duke of Sussex said the legal action has been "months in the making" and gave a first glimpse into how he and, especially Meghan, have been personally affected by the nonstop coverage of their relationship.

(MORE: Duchess Meghan goes back to college in South Africa to support girls' access to education)

"There is a human cost to this relentless propaganda, specifically when it is knowingly false and malicious, and though we have continued to put on a brave face – as so many of you can relate to – I cannot begin to describe how painful it has been," he said, adding later in the statement, "I have been a silent witness to [Meghan's] private suffering for too long. To stand back and do nothing would be contrary to everything we believe in."

The Mail on Sunday claimed the letter from Meghan to her dad emerged after some of Meghan's friends anonymously spoke to People magazine in a rare interview, claiming the Duchess of Sussex was a victim of "global bullying."

Meghan, who was pregnant with Archie at the time the People article was published, was dubbed "Duchess Difficult" by the British tabloids after her marriage to Harry.

The media also fanned the flames of a reported feud between Meghan and her sister-in-law Kate, the Duchess of Cambridge. The British tabloid The Sun ran an article last November that claimed that Meghan made Kate cry at a bridesmaid's fitting for Kate's daughter, Princess Charlotte.

Meghan has been covered relentlessly by the British press since her relationship with Harry began three years ago.

While the couple was dating, Kensington Palace issued an unprecedented statement on behalf of Harry lambasting the "abuse and harassment" of Meghan by sections of the press, making particular note of the "racial undertones" of some coverage.

Harry and Meghan have seemed to increase efforts to maintain a level of privacy since the birth in May of Archie, their first child.

They upended recent royal tradition by choosing to keep details of Archie's birth and christening private. They also chose before Archie was born to move from Kensington Palace in London to Frogmore Cottage, a more secluded home on the grounds of Windsor Castle.

Earlier this year Harry received an apology and won a court victory against paparazzi who took photos of his and his wife Meghan's country home in Oxfordshire.

As part of the court agreement, Splash News, which chartered a helicopter to take the photos, agreed to pay what Buckingham Palace called a "substantial sum" in damages and legal costs.

Harry and Meghan are not the first royals to take legal action for what they see as breaches of privacy.

Two years ago, six defendants -- three executives and three photographers -- were found guilty of criminal charges in France over long lens photographs taken of Duchess Kate sunbathing while on vacation with Prince William in 2012.

"The Duke and Duchess of Cambridge are pleased that the court has found in their favour and the matter is now closed," a Kensington Palace spokesperson said in response to the ruling. "This incident was a serious breach of privacy, and Their Royal Highnesses felt it essential to pursue all legal remedies. They wished to make the point strongly that this kind of unjustified intrusion should not happen."

Harry and Meghan are privately funding their current lawsuit and plan to donate any proceeds from damages to "an anti-bullying charity," according to the statement released Tuesday.