If you're ready to party, here's the musical blast we need right now to cure our pandemic blues. "The Prom, which director Ryan Murphy, the "Glee" guru, lovingly brings to Netflix on Dec. 11, wears its unruly heart on its sleeve as it sings, dances and laughs our troubles away.

An all-star cast, led by Meryl Streep, Nicole Kidman, James Corden and Kerry Washington, seem to be having the time of their lives. You will too.

Based on the 2018 Tony-nominated Broadway hit, the movie has a default position of "go big or go home." The visceral kick of live theater is not easily reproduced in a film musical where songs are lip-synced and editing does the choreography, but "The Prom" has its heart in exactly the right place and its message of tolerance never gets old.

The plot revolves around two aging Broadway pros -- Streep's Dee Dee Allen and Corden's Barry Glickman -- who have just watched their rap opera about the lives of Eleanor and Franklin Roosevelt close on opening night. No surprise. Their publicist, Sheldon (Kevin Chamberlin), bluntly tells them it's their fault: "You're just not likable. Nobody likes a narcissist." 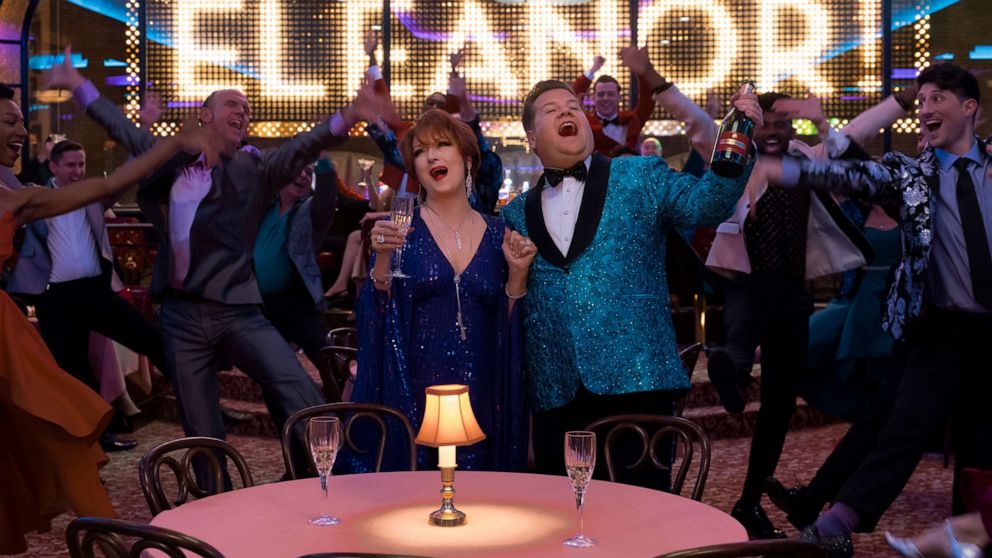 Melinda Sue Gordon/NETFLIX
Meryl Streep and James Corden in a scene from "The Prom."

Facing ruin, the spotlight junkies hatch a plan. Their friend Angie (Kidman), a dancer stuck in the chorus, finds an article trending on Twitter about an Indiana high school senior named Emma (Jo Ellen Pellman) who's been forbidden to attend prom with her same-sex date. This shall not stand.

Dee Dee, Barry, Angie and their unemployed actor friend Trent (a terrific Andrew Rannells) hitch a ride to Hoosier country on a "Godspell" touring bus. They figure their new roles as social activists will make them relevant and really, really liked.

"We're gonna help that little lesbian whether she likes it or not," says Barry. And they're off on a journey that is mad, wicked fun.

The jokes on egomania propel the action as Dee Dee enters the school gym belting, "It's Not About Me," which of course -- now and forever -- it is. Streep, in a dark wig and a smear of the reddest lip gloss, is a total delight sending up the essence of divahood.

MORE: What to know about Ryan Murphy's upcoming star-studded movie, 'The Prom'

Still, if it's not about Dee Dee and her merry band of hams, who is it about? Emma, that's who. Newcomer Pellman finds the lilt and loveliness in the songs by Matthew Sklar and Chad Beguelin. "I just want to dance with you," croons Emma to her secret love, Alyssa Greene, played by the mega-talented Ariana DeBose. The catch is that Alyssa's mother (Washington) is the PTA scourge who battled to make homophobia and the heartland synonymous.

Murphy, who also grew up queer in Indiana, has gone on record with his personal reasons for putting "The Prom" on screen ("I wished when I was young that I had a film like this to see"). Thanks to more than 200 million Netflix subscribers, "The Prom" will deliver its message of tolerance far beyond its Broadway roots. 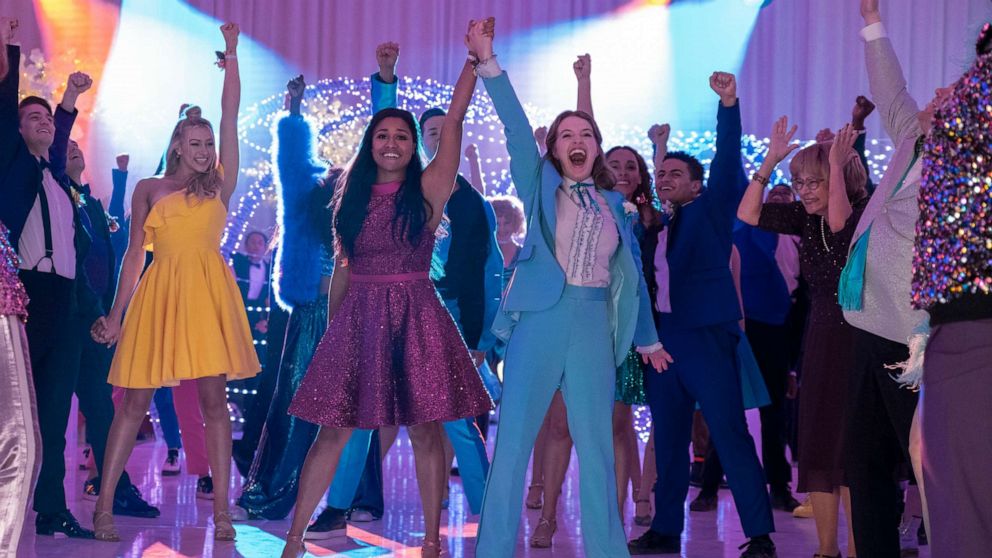 Those subscribers will also get to see Streep cut loose like never before, a sensational Kidman wrap her "crazy antelope legs" around a Fosse-type number called "Zazz," a hilarious and heartfelt Corden touchingly recall the prom Barry never had and Rannells blow the roof off your house in a rousing dance number aptly titled "Love Thy Neighbor."

The movie also scores in its quiet moments. Keegan-Michael Key brings soulful yearning to the role of the progressive school principal who sings of his crush on Dee Dee and musical theater. "We need a place to run to/ when everything goes wrong/ when the answer to each problem/ is to burst into a song."

Those lyrics perfectly capture why "The Prom" will work its magic on you even if you hate musicals. Expect critical reservations to melt away in the face of such sheer exuberance. You might even brush away a tear at the genuine feeling under the jokes.

The knockout finale brings the starry cast together with real LGBTQ couples to build a prom for everyone willing to stop hiding. Corny? You bet. Fantasy? Maybe not. Just try to resist when Murphy and company cue the drums and sing in unison that "it's time to dance." It is, indeed.