Serena Williams hit a major milestone Sunday in her journey since becoming a mom.

"It feels good. It’s been a long time. I think you can see the relief on my face," Williams said after defeating fellow American Jessica Pegula 6-3, 6-4 at the ASB Classic in Auckland, New Zealand.

A first title in three years for @serenawilliams !

Williams' daughter was in the crowd to watch her mom win, taking it all in while sitting on the lap of her dad, Williams' husband Alexis Ohanian.

"She’s so fun," Williams said about Alexis. "I’m a little biased but she’s so cute."

With her win Sunday, her 73rd WTA title, Williams became the first woman to win singles titles in four different decades, according to tennis legend Billie Jean King, who congratulated Williams on Twitter.

Congratulations to @serenawilliams, on earning her 73rd @WTA title, & in doing so became the 1st woman to win singles titles in 4 different decades! Great to see Ruia Morrison, an excellent player & ambassador for NZ, as part of the ceremony to connect the generations. #champion https://t.co/D3pb1pYFkE

Williams' last tournament win was the 2017 Australian Open, when she was in the early weeks of her pregnancy.

Williams has been public about the life-threatening medical complications she faced after giving birth to Olympia in September 2017.

She has also been honest with the struggles she's faced balancing motherhood with her tennis career and fighting for rights as a new mom, including securing seedings at tournaments after maternity leave. 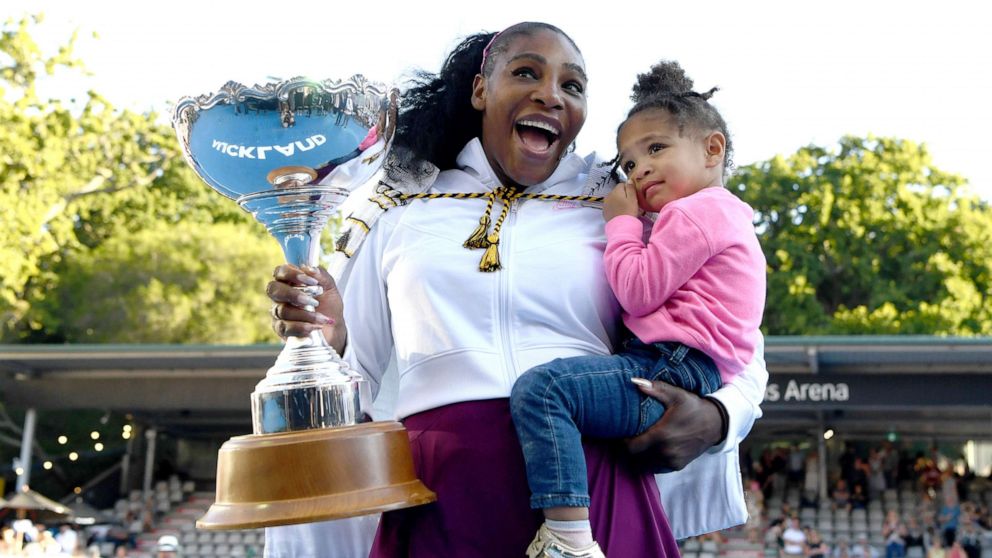 Williams has made it to the finals of several Grand Slam tournaments since becoming a mom, but has so far come up short in each.

Williams will next travel to Melbourne to compete in the Australian Open, which kicks off Jan. 20.

"I feel so fortunate and blessed to be able to just be out here and be healthy and to play," Williams said Sunday. "I’ve been out here for so long and I’ve been through so much so it’s good to be able to come and do what I do."

"I just feel so happy to be doing something that I absolutely love," she added.

Williams also made it to the women's doubles finals at the ASB Classic with her partner and close friend Caroline Wozniacki but lost 6-4, 6-4 to Americans Taylor Townsend and Asia Muhammad.

In accepting her singles trophy Sunday, Williams confirmed she will donate a dress from each of her matches and all of her prize money to bushfire relief efforts in Australia, where fires have destroyed millions of acres of land.

"I’ve been playing in Australia for over 20 years," Williams said. "And it’s been really hard for me to watch all the news and everything that has been happening in Australia with all the fires and over a billion animals [dead] and people that lost their homes."