Parenting is hard and parenting during a pandemic, as the past two years of the coronavirus pandemic has shown, is immeasurably harder.

In a sign of the frustrations the pandemic has brought, a group of mothers in Massachusetts has begun gathering together to simply scream.

Their first primal scream session, held in March 2021, saw around one dozen moms show up on a dark, freezing night in Boston to scream together.

The second scream session, which took place earlier this month, on Jan. 13, saw nearly double the number of moms gather for around 20 minutes to scream.

"There are days you just want to scream and it's not healthy to do it with your kids or your spouse," said Lauren Thompson, a married mother of two and small business owner in Boston who attended both scream sessions. "Having a space to go do it, it took a weight off my chest to just get out and feel like you’re in a safe space." 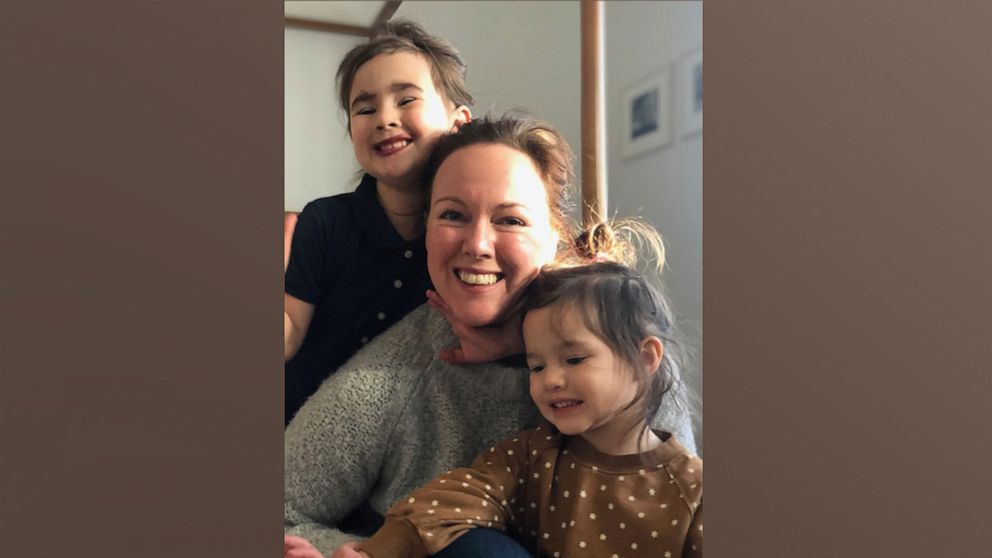 Tess O'Brien, another mom who attended both scream sessions, spent the first year of the pandemic pregnant with her second child, and the second year trying to balance working remotely while caring for two children, who are both currently too young to get vaccinated against COVID-19.

O'Brien said she and her husband have both balanced their full-time jobs with caring for their children through quarantines and periods of no child care, with her husband picking up most of the caregiving at home as she experienced a busy time in her job.

We're all so depleted

"We're all so depleted," O'Brien said. "We're mentally exhausted from the constant risk calculation and from trying to do our jobs and parent at the same time. We're emotionally exhausted because we're not filling our own cups and we're trying to care for these little humans who are navigating this world with masks on all the time.

"The scream was this hilarious opportunity to let go," O'Brien said. "It was a moment of release and escape in this crazy, constant survival mode that we've been in for two years."

The scream sessions are the brainchild of Sarah Harmon, a Boston-based licensed mental health therapist and mom of 3 and 5-year-old daughters.

Harmon was several months away from launching a program for moms, called The School of MOM, in March 2020, when the pandemic hit. After seeing the toll the pandemic was taking on moms, she sped up the launch of the program and made it virtual.

From her sessions with moms and from what she felt as a mom herself, Harmon said she noticed a lot of talk about anger, which she described as a "tip of the iceberg" emotion that has bigger emotions like rage, anxiety, fear, resentment, loneliness and guilt underneath.

As she coached her fellow moms on recognizing anger as a healthy emotion and finding ways to regulate it, the idea came to join together in a scream. 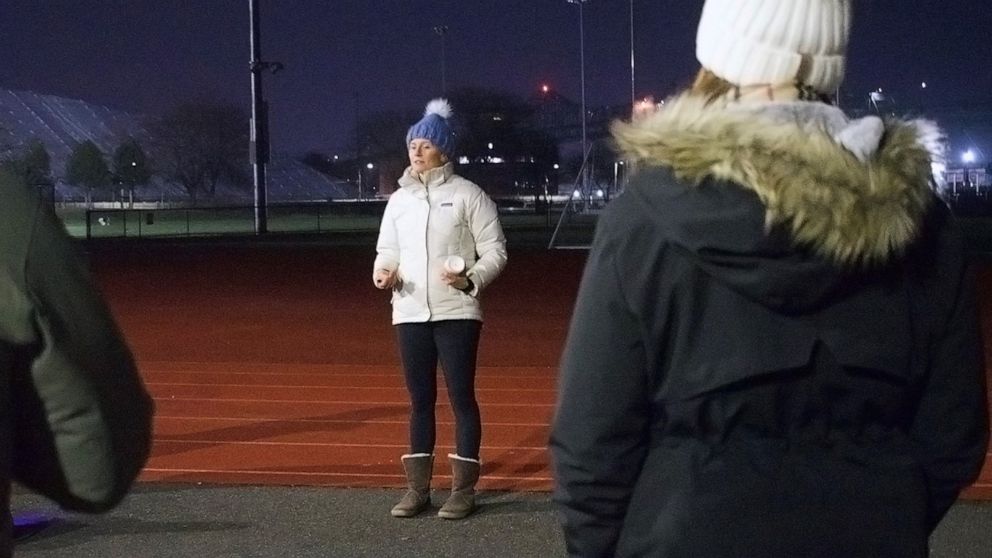 Meghan B. Kelly/WBUR
Sarah Harmon, a therapist and founder of The School of MOM, leads a scream session for moms on Jan. 13, 2022, in the Boston area.

"I was talking a lot about that, and kind of casually in sessions saying, 'Ah, we just all need to get together to a field and scream it out,'" recalled Harmon. "And my clients and in group calls and moms at school and other women were like, 'Yeah, let's do it.'"

When the moms gathered for the first time in March 2021, Harmon said more and more moms kept showing up on the dark, cold night in Boston, describing it eerie-like with the women "almost coming out of the shadows." 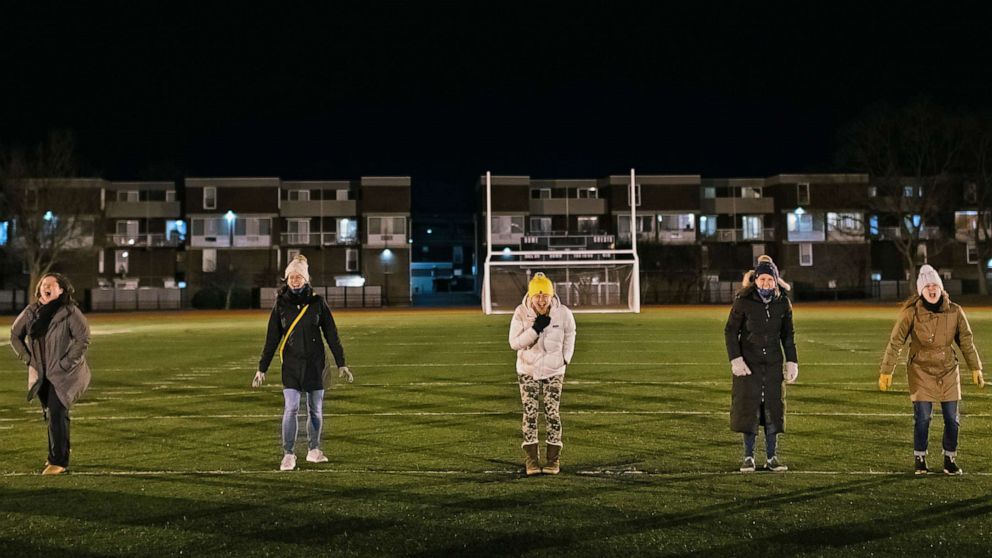 Alicephoto.co
A group of moms gathered for a scream session led by a licensed mental health therapist in Boston in March 2021.

Though the women vowed to hold a scream weekly, soon after the first one, the pandemic situation in the U.S. seemed to improve enough that another session was not held.

In January, as the pandemic entered a third year and the omicron variant spread in the U.S., increasing the number of pediatric cases of COVID-19 to record levels, Harmon said she saw and heard a need for moms to meet again.

"Ultimately these past three weeks have been just as hard if not harder than 2020 because of just all the closures and kids being home and parents not being able to work again," Harmon said. "It's just a feeling of defeatedness and a lot of other emotions, with, again, a very common one of anger." 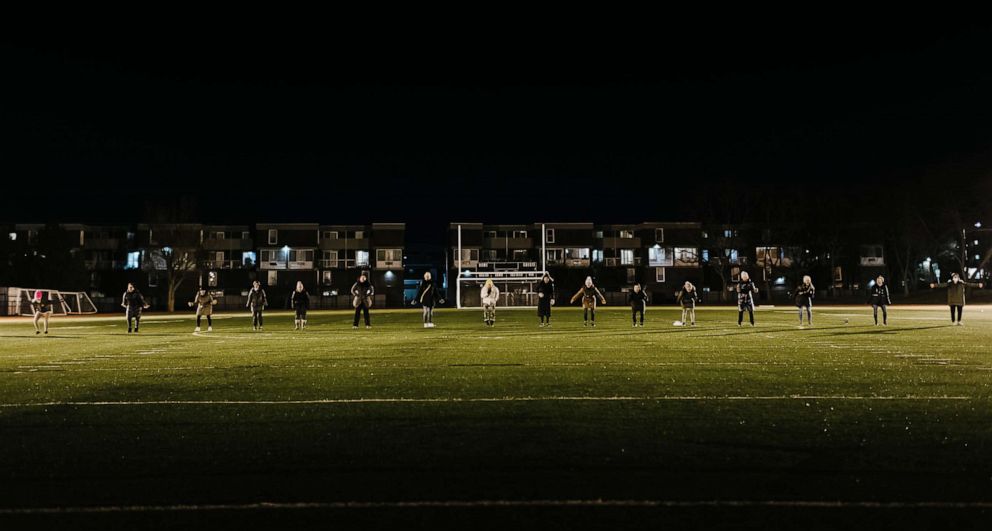 Alicephoto.co
A group of moms gathered for a scream session led by a licensed mental health therapist in Boston in March 2021.

While dads have undoubtedly played a significant role in parenting during the pandemic, the data shows that, in many families, it is moms who have largely carried the caregiving role.

Moms with children ages 12 and under spent, on average, eight hours a day on child care, about three hours more per day than fathers, while at the same time working an average of six hours per day in their jobs, according to a Brookings Institution analysis of data from the Bureau of Labor Statistics.

So when nearly two dozen moms met on a football field again on Jan. 13, Harmon, led them in a 20-minute primal scream session.

Using lighted unicorn wands she borrowed from her daughters, Harmon led the moms in five rounds of screaming. First, there was a "normal" scream, then a scream using any curse words they wanted, followed by a free-for-all scream, a scream for all the moms who were too busy to attend and, finally, an encouragement to just scream as loudly as possible.

The scream session had all the trappings of parenthood today, including O'Brien being a few minutes late because she was busy doing laundry and other moms joining virtually from home because they were quarantined due to COVID exposures.

On the other side of the screams, the moms said they felt a new emotion, peace.

"It was a release and you laugh afterwards," said O'Brien, who said she has learned the lessons of compassion and non-judgment through joining moms in the scream sessions.

"Nothing is simple anymore and we have to be able to hold two opposite truths at the same time," she said. "You can be really exhausted and tired of parenting and also love your kids an incredible amount, at the same time."

"Moms have been hit hard during this pandemic, but also a lot of dads are experiencing much of the same and taking on a solid share of the load," O'Brien added. "We chose to have kids, but we certainly didn’t choose to do so under these extreme circumstances."

Harmon said she been struck by the attention her most recent scream session has attracted, including coverage by radio station WBUR and The Boston Globe and requests from people across the country asking how they can do it locally.

"One mom said it so well, that it just felt good to feel out of control for a second," said Harmon. "A scream feels very primal and uncalculated, and we've been so calculated. Everything has 19 steps, like just a decision to go to the grocery store, so to have a time off from that overthinking is huge."

Screaming out loud and in community is after all doing what so many moms have for so long suffered through alone, noted Thompson, who is featured in Primal Scream Portraits, a photo series started by another mom, Alice Donovan Rouse, who attended the first scream session. 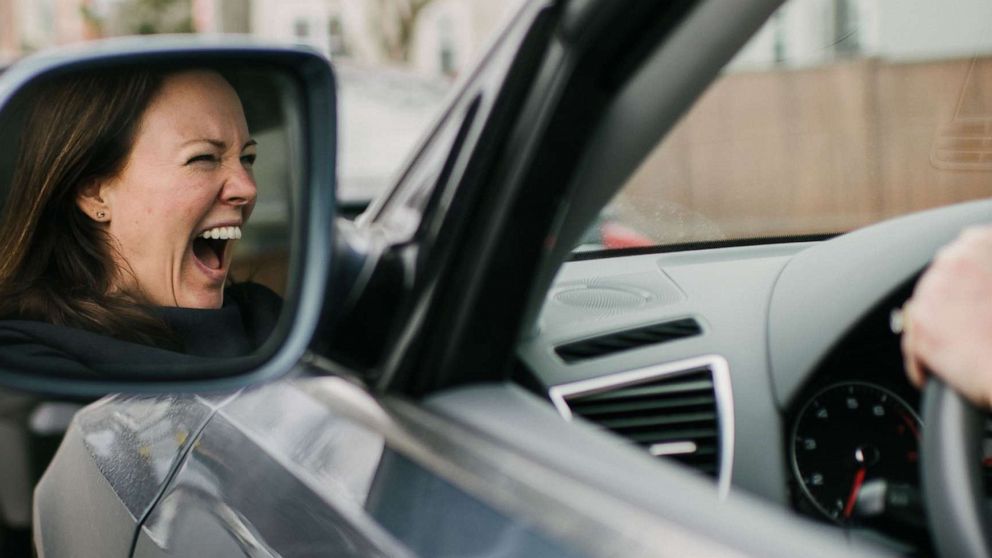 Thompson said after she was featured in the Boston Globe article, an aunt reached out and opened up to her for the first time about her own experience feeling alone in her early years of motherhood.

"My aunt happened to see [the article] and told me, ‘I’m so proud of you. I wish I had this as a young mom. My safe space was my car where I could go and scream,'" said Thompson. "That was a conversation my aunt and I would never have had had this not been out in the world."