During the coronavirus pandemic, a working-age woman, on average, provided 173 additional unpaid hours of child care, according to a new analysis.

That is nearly three times the amount of additional unpaid hours of child care taken on by a working-age man, according to the analysis from the Center for Global Development, a nonprofit organization that works to reduce global poverty.

“We knew there was a gap, but the immense inequality on who is providing unpaid care is staggering,” Charles Kenny, a senior fellow at the Center for Global Development, said in a statement. “Unpaid care burdens continue to pile up for women, and every hour women provide childcare for free is an hour that they can’t build their own businesses, work in formal jobs, and secure their economic futures.”

In total, the closures of schools and preschools around the world during the pandemic created the need for 672 billion hours of additional unpaid child care, the equivalent of about a million lifetimes, according to the analysis.

The data "suggests many families, and in particular sisters, aunts, and mothers, were left trying to juggle work and child-care simultaneously. The consequences will surely outlive school re-openings," the authors wrote in the analysis.

In the United States, the economic recession brought on by the pandemic has been called the "shecession" by economic experts because of the disproportionate impact it has had on women, both in jobs lost and in women who have left their jobs because of caretaking duties.

More than 2 million women in the U.S. left the workforce in 2020, according to the National Women's Law Center, a policy-focused organization that fights for gender justice.

Research done last year on working moms in the U.S. found that women ages 25 to 44 are almost three times as likely as men to not be working during the pandemic due to child care demands, and mothers working from home during the pandemic reduced their working hours four to five times more than fathers. 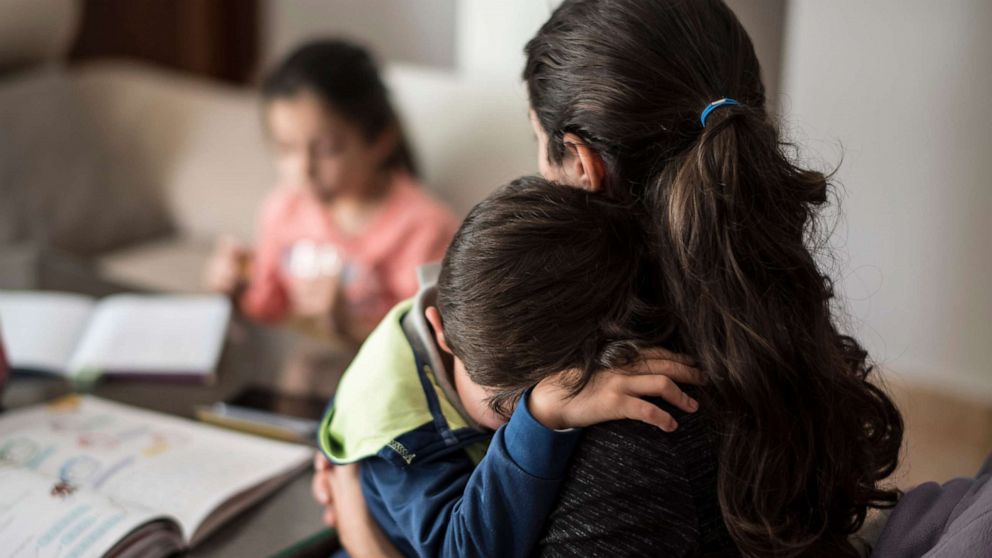 STOCK IMAGE/Getty Images
A mother comforts her crying son while in the background her daughter performs homework.

Now, working mothers with children under 18, who total about 23.5 million in the U.S., are facing a new shift as offices and schools reopen post-pandemic but affordable child care remains inaccessible to many.

Even before the pandemic, at least half of American families were living in areas considered "child care deserts," or neighborhoods without enough licensed child care slots to meet the local demand, according to data from the Center for American Progress.

Industry groups warned during the pandemic that as many as half of the nation's child care programs could close without government assistance. One estimate from the Center for American Progress predicted that more than 4 million child care slots could be permanently lost.

The federal government has pumped $50 billion into the industry over the past several months, but experts say they are still not sure of the extent of permanent damage done to the nation's child care infrastructure.

In April, President Joe Biden proposed the $1.8 trillion "American Families Plan" that would create universal pre-K for 3- and 4-year-olds, cap how much low- and middle-income Americans must spend on child care, extend Affordable Care Act tax credits and expand paid leave, among other things.

Congress continues to debate how to proceed with the rest of Biden’s proposals, including investments in child care and tax credits for families.