The crisis has continued, despite Abbott, one of the nation's largest formula manufacturers restarting a key Michigan plant this past Saturday following a February recall and temporary shutdown. The company estimates it will take at least six to eight weeks for production to reach full capacity.

That's time caregivers say they don't have. Conditions have become dire enough over the past several months that parents have flocked to Facebook groups and desperately reached out for help finding formula as store shelves remain bare.

90% of formulas out of stock in some states

Tracking firm Datasembly has been recording the lack of formula products in more than 130,000 stores nationally. According to data obtained by ABC News, nine states across the U.S., including California, Florida, Georgia, Louisiana, Mississippi, Nevada, Rhode Island, and Tennessee have topped 90% out-of-stock rates, with Arizona hitting a 94% out-of-stock rate during the week of May 22-29. 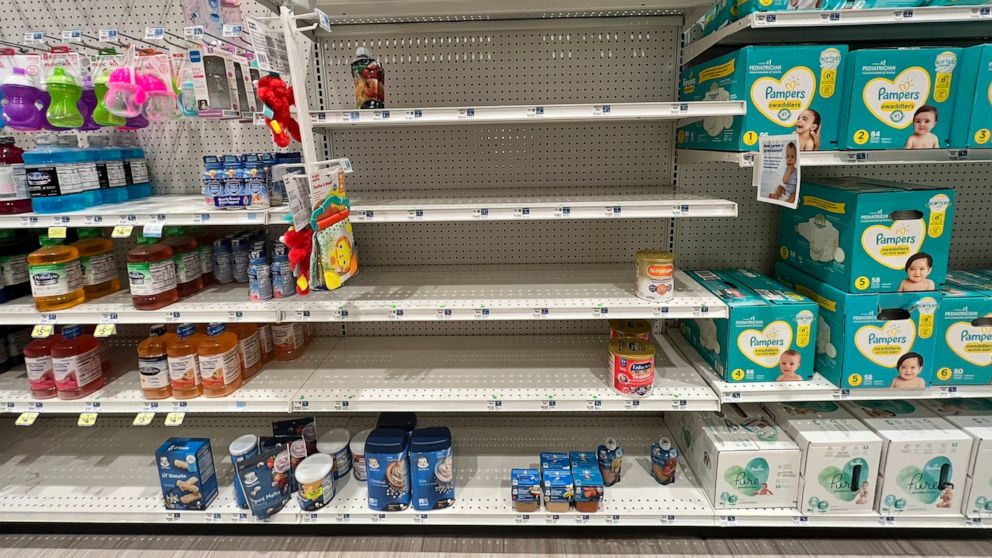 Courtesy Mac Jaehnert
Baby formula in the U.S. has grown increasingly hard to find for months and despite federal efforts to ease the crisis, parents are reporting that they haven't noticed any positive changes.

The national average out-of-stock rate has climbed to over 73%. Twenty-nine states, along with Washington, D.C., and Puerto Rico, have seen over 75% of baby formulas out of stock.

The federal government has been trying to fill the gaps by launching Operation Fly Formula, which was approved by President Joe Biden nearly three weeks ago on May 18. The initiative has fast-tracked the imports of millions of baby formula products and a fifth shipment from Germany with another 1.6 million formula bottles is expected to arrive in Texas on Thursday, according to the White House.

But the latest shipment will only contain Nestlé NAN SupremePro Stage 1 infant formulas, meant for healthy babies and will not include specialized formulas, which have hit families of children with allergies and premature infants especially hard.

Some formula prices have shot up as demand remains high

Mac Jaehnert lives in Washington, where Datasembly's statistics indicate formula stock rates are hovering at 89.9% out of stock.

"I am still seeing extremely limited availability of NeoSure in shelves and online," Jaehnert told "Good Morning America," referring to one of Abbott's formulas for premature babies. "We've seen an occasional case of NeoSure arriving at our local Walmarts and will periodically see it available online but by and large those orders end up getting canceled."

"Now other specialty formulas are becoming extremely hard to find, like Nutramigen and Gentlease," the father of one continued. 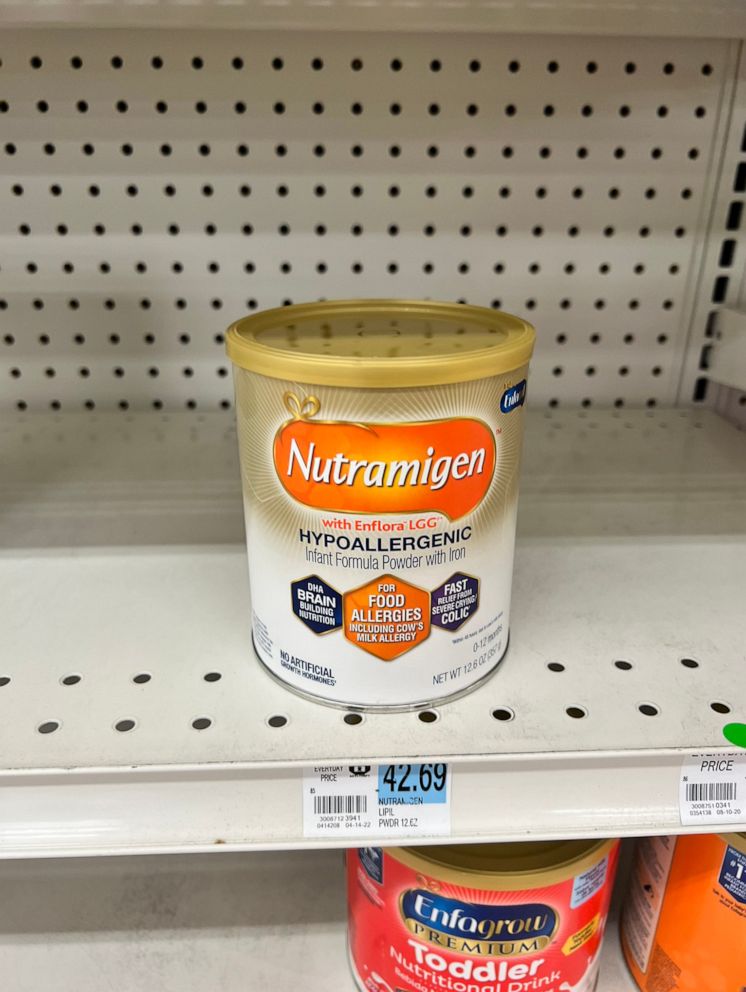 Courtesy Mac Jaehnert
Nutramigen, a specialized hypoallergenic baby formula, is made especially for babies and children with a cow's milk protein allergy.

"On top of everything else, major retailers like Rite Aid are raising prices on formula by huge margins -- so even if we can find brands in high demand, they're charging up to $10/can more," Jaehnert wrote via Twitter. 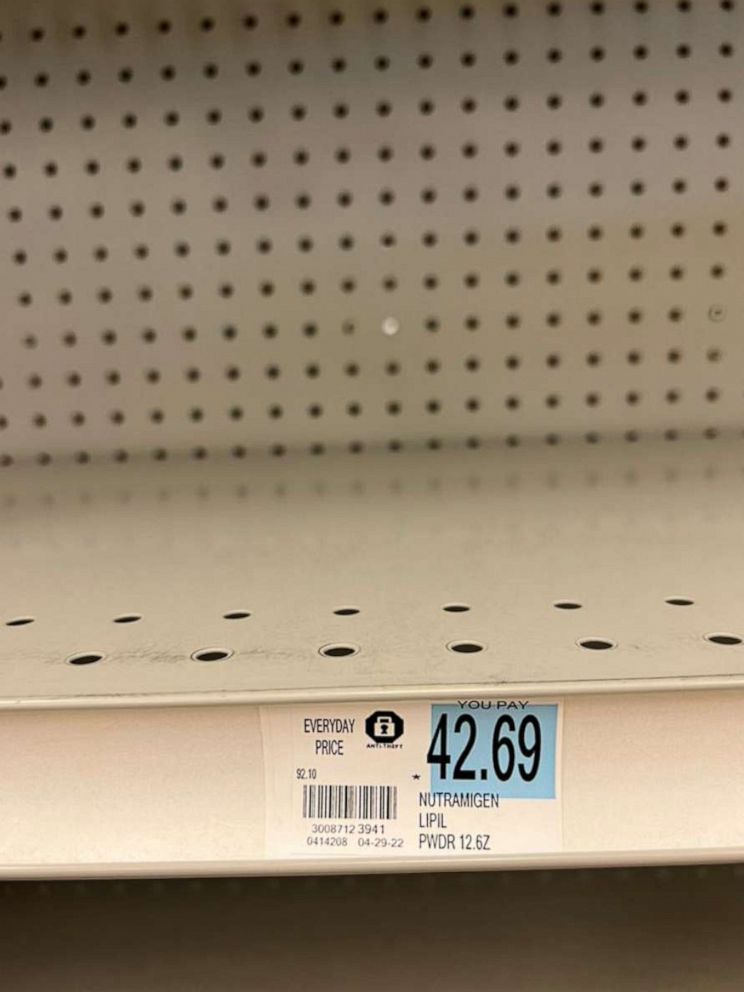 Courtesy Mac Jaehnert
According to Mac Jaehnert, a father of one in Washington, Nutramigen and other specialized baby formula products have not only been hard to find in his area but in some stores, the prices for them have shot up significantly. 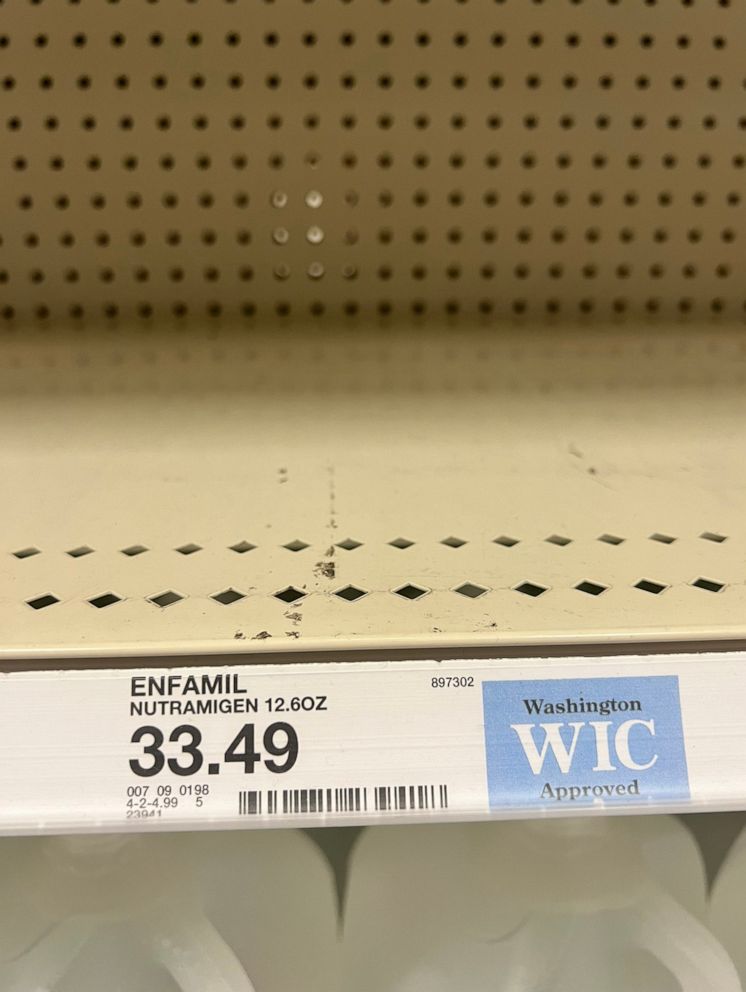 Courtesy Mac Jaehnert
Jaehnert stopped by a Target store in his area of Benton County, Washington, and was unable to find any Nutramigen baby formula, a formula that's made for children with food allergies.

"GMA" has reached out to Rite Aid for comment and has yet to hear back.

Both Jaehnert and another parent, Kerissa Miller, are part of the Find My Formula, Tri Cities WA Facebook group where they've been volunteering for hours and days on end to help fellow moms and dads get baby formula.

"We recently started working with the [neonatal intensive care unit] and preemie releases from the hospital and noticed that they are not sending premature babies home with enough formula or the correct type because of the shortage," Miller told "GMA" via text message. "The store shelves have not improved much. We actually started purchasing from other states that [have] better supply to support our local babies."

"We do hope to see change soon but there has been zero change in the inventory supply in our area unfortunately, [and] our group has grown to almost 1,500 people, so we have even more babies to feed now," she added.

For Taylor-Rey J'Vera, a mom of one in Brooklyn, New York, Abbott's February recall impacted her family directly and this spring, she and her wife Libby decided to switch their 8-month-old's formula twice, first in response to the recall and the second time because the switch led to a run on their substitute formula.

"After the recall, we switched over to Enfamil. And so we use a specific type of Enfamil. It's kind of hard to find in stores so we were mostly doing online searching and purchasing through Amazon or directly through Enfamil," J'Vera explained.

When their formula stock ran low, J'Vera said she searched in local drug stores, online, and she even noticed strangers selling baby formula on the New York City subway at "crazy gouged prices."

"We were really scared. We did start to feed [River] solids a little sooner. Like he was already starting solids, but we've been kind of fast-tracking the solids journey because we were and are still a little nervous about what the future holds," J'Vera recalled.

J'Vera said her family was ultimately "super blessed" as their friends, family members, and even exes reached out to help them find formula in places as far as Canada for baby River.

"What I've been doing now, we're just giving away any extra formula, because people are still bringing it to us very nicely as a surprise. People are like, 'Oh, yeah, I saw this. This is for you. You don't have to pay for it. It's fine. Just take it.'"

J'Vera said any extra formula goes to those they know who still need it.

"We're like, 'Hey, do you want this formula?' and we're just trying to pay it forward," she said.

"Things are supposed to be changing, but we can't seem to get a clear timeline on any of the changes exactly," she added. "We keep hearing that idea like everything is in the works … but we don't know when any of that is going to actually hit the shelves."

An end to the crisis is hopefully starting to take shape as more response plans take off. Datasembly, the firm tracking formula out-of-stock rates, told "GMA" late Tuesday, "While the infant formula stock situation in the US continues to be quite volatile, there are measures being implemented to drive inventory into the market and it is expected that we are nearing the peak of the out-of-stock situation."