LaDyra Lyte received not only her diploma but the surprise of her life at her college graduation.

Lyte, 23, of Southfield, Michigan, was walking to the stage at Central Michigan University's commencement ceremony Saturday when the school's president began to read a letter from her brother, LaDaryl Lyte, who has been deployed for nearly one year with the U.S. Army Reserve.

"I want you to tell my sister how proud I am, how gracious she is, how superlative she is, and I know that she is going to do amazing things in her life," LaDaryl Lyte said in the letter, read aloud on his behalf in front of a packed auditorium of graduates and their loved ones. "She is one in a million with a special talent of knowing just how to move forward."

As his letter was being read, LaDaryl Lyte, 22, walked out behind his sister, delivering a huge surprise. 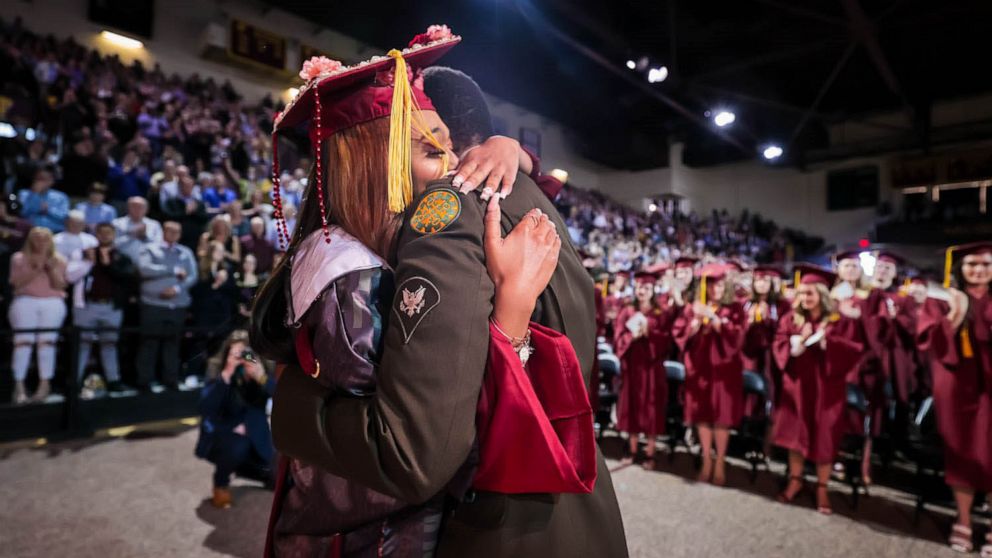 LaDaryl Lyte told "GMA" by email that he had to miss his sister's high school graduation in 2017 when he left for basic training, and was not going to miss her graduation from college.

Once his leave was approved by the Army, LaDaryl Lyte said he emailed Central Michigan University officials, offering to stand in the back of graduation if it was sold out because he didn't want to miss it. He said he received an email back saying that not only could he attend, but the university president wanted him to be part of the graduation, which became the surprise.

"They had me show up to the graduation two hours early so they could hide me upstairs so my family wouldn’t see me," he said. "The night before I couldn’t even sleep because I was nervous, so I was essentially up for like 36 hours to do this surprise." 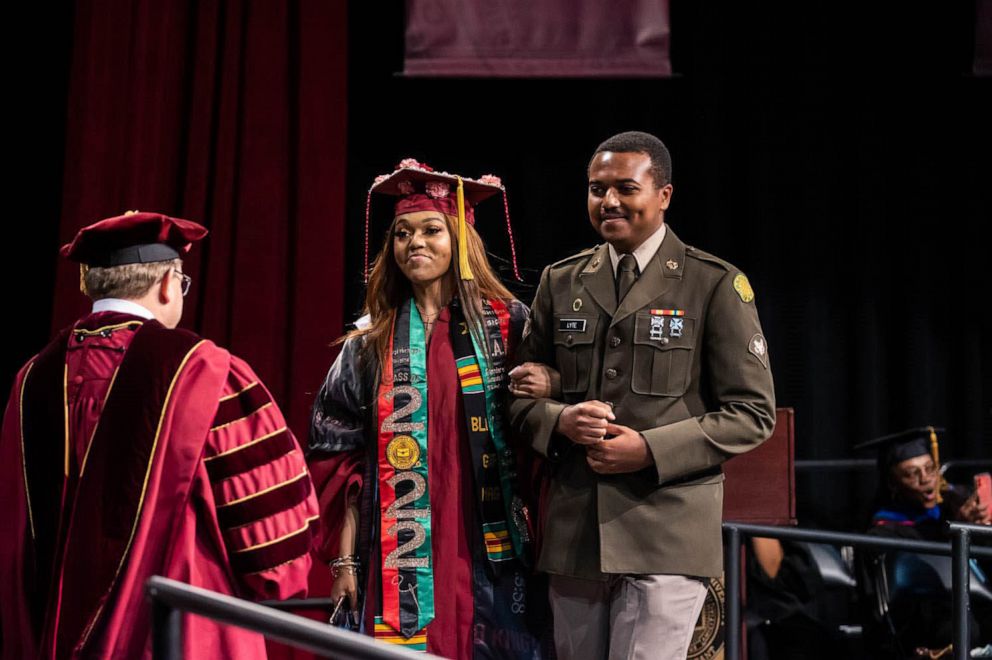 The look on his sister's face when she turned around saw him was like she saw "a ghost," according to LaDaryl Lyte.

LaDaryl Lyte surprised not only his sister, but also their dad, who ran down from the stands and engulfed his son in a hug.

"My dad doesn’t run anymore. He has bad knees," said LaDyra Lyte, adding of the sight of their dad running down, "I couldn’t believe it." 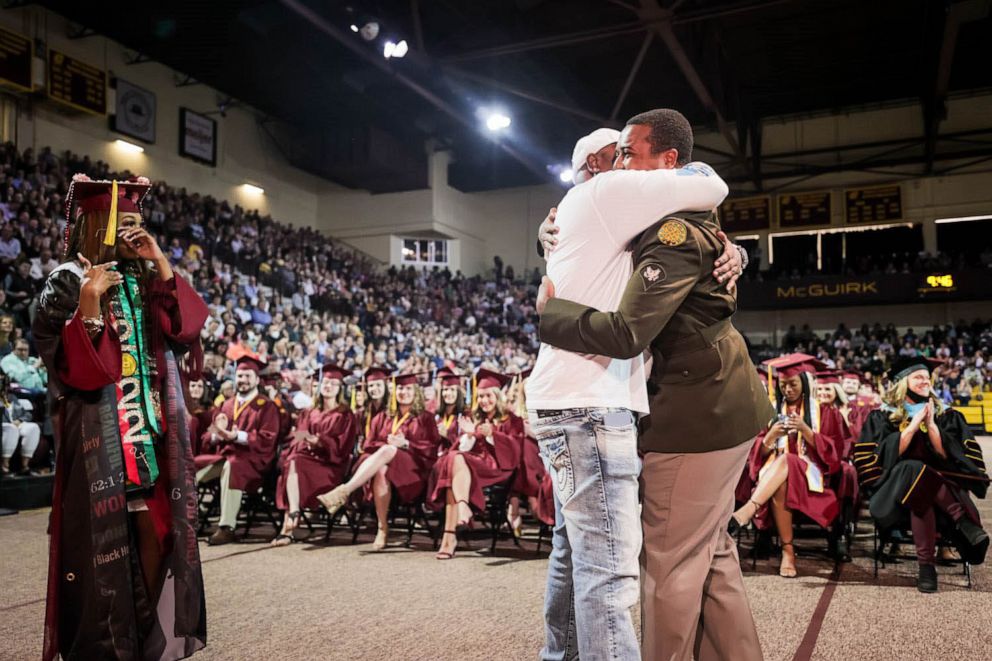 The only family members in on the surprise were the siblings' older sister and their mom, Alisha Lyte, who herself was surprised by her son two days before the graduation.

In order to surprise his mom, LaDyral Lyte told her he was expecting a package for him to arrive at her house. When she went outside to get the package, he jumped out and surprised her.

"He jumped from behind a bush and scared the living daylight out of me," said Alisha Lyte, adding that it was the first time she had seen her son in nearly a year.

LaDyra Lyte said the fact that her brother -- who was able to visit his family for several days -- took time off work to travel across the country to surprise her is just another sign of their close bond.

Because of their just one-year age difference, the two were raised almost like twins, even dressing alike when they were young, she said.

"He played sports, so I wanted to play sports. I was in the band, he joined the band so we could have that connection," said LaDyra Lyte. "My brother has been there for every single thing that I’ve been through, ups and downs." 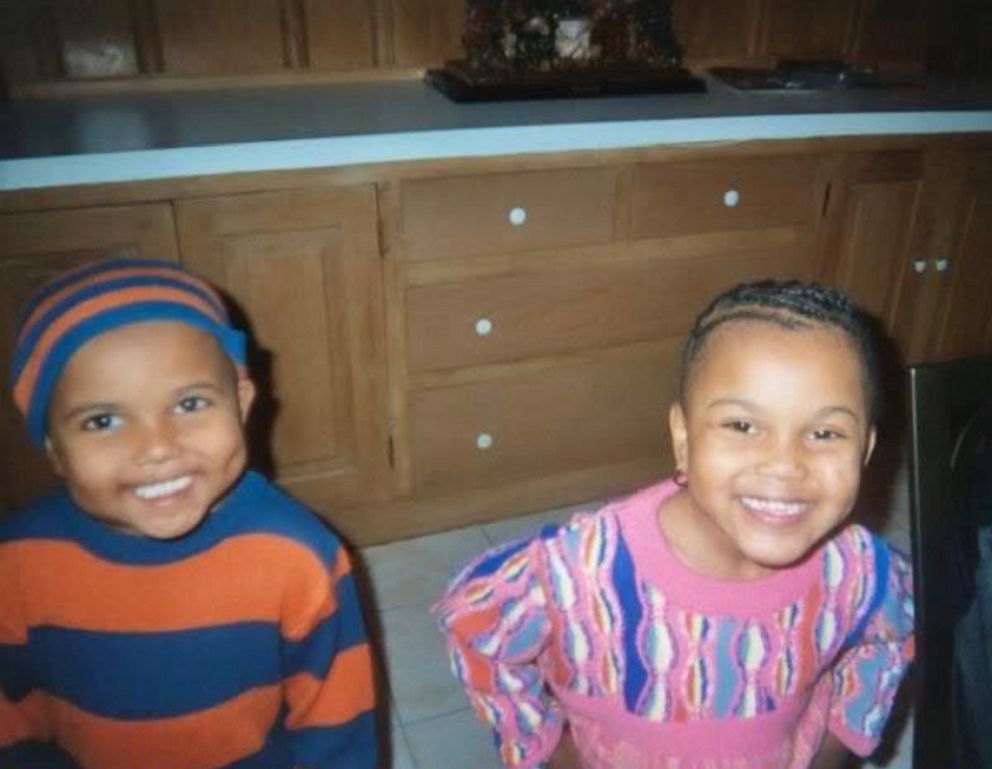 Her brother said of their special bond, "My sister and I were close growing up and we were always there for each other’s big moments."

MORE: 99-year-old presented with his high school diploma on his birthday

LaDyra Lyte, who earned her degree in fashion merchandising & design, said she now hopes to go to graduate school and fulfill her dream of becoming a fashion designer.

The graduation gown she wore on Saturday was one she designed herself, with a special meaning. The gown featured the names of people of color who have, after their deaths, become synonymous with the racial justice movement, including Trayvon Martin and Breonna Taylor. 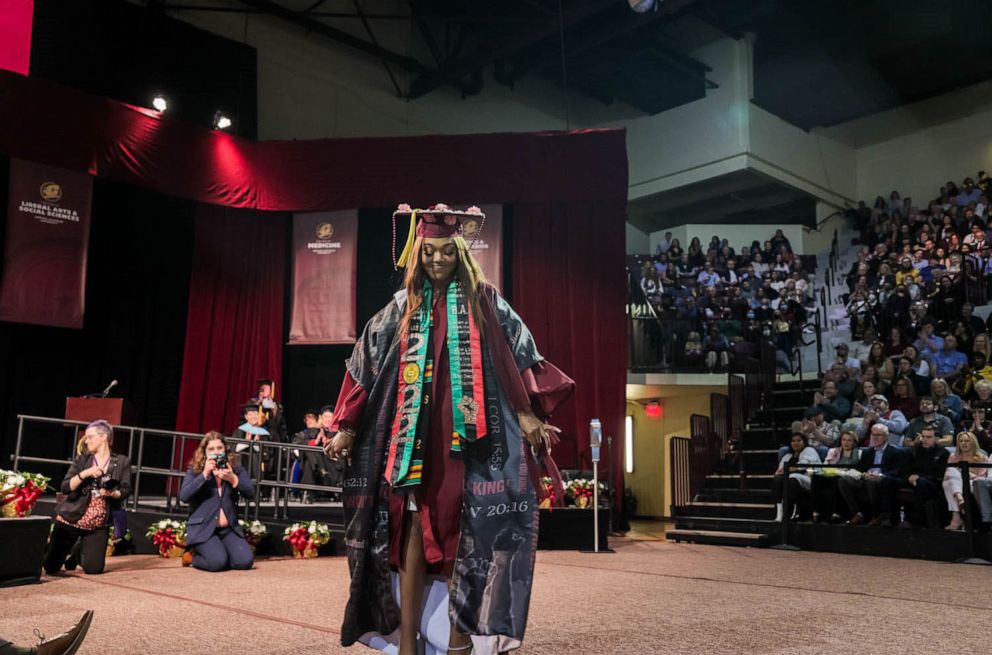 "I wanted to tribute every single Black or Brown individual that died too soon because of police brutality and I wanted them to walk across stage with me," said LaDyra Lyte. "So graduation really wasn't for just me. I wanted to make sure it was for every person in my community, to let them know that I see them too."