The elopements see couples doing everything from climbing thousands of feet in elevation to say "I do" on a mountaintop to hiking through a snowstorm to wed in the picturesque backdrop of freshly-fallen snow.

"A majority of our couples are the kind of people who do this stuff on the weekends and it’s such a big part of who they are as a couple that they wanted to do this for their wedding," said Brandon Fox, a Washington-based photographer who specializes in adventure elopements.

"A lot of them end up having a big party later, so they have the best of both worlds," he said. "They get married on the adventure of their dreams and then have a big celebration with their closest loved ones."

Brandon and his wife Gabi Fox, founders of The Foxes Photography, were professional landscape photographers until they switched their focus a few years ago to the booming business of photographing adventure elopements.

The Foxes not only photograph elopements on cliffs, beaches and mountaintops but they also serve as nearly full-service wedding planners for couples, helping them find things from the perfect location to the makeup artist who has a car with 4-wheel drive to the wedding dress. 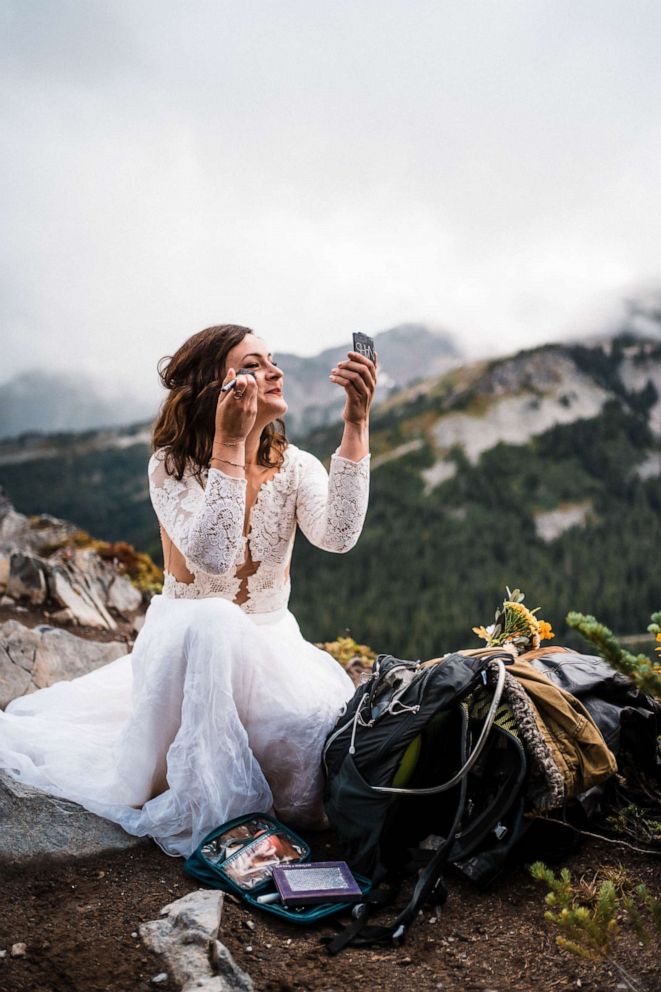 Thefoxesphotography.com
A bride touches up her makeup on a mountaintop during an adventure elopement.

"When we first start talking to our couples we like to get an idea of what inspires them, the types of places and adventures they’ve been on and that they want to go on, the types of landscapes they like," Gabi Fox said. "We want to get a sense of what will make them the happiest and based on that conversation, we put together a whole day for them."

Once a location is picked, the Foxes give the couple ideas for lodging and let them know how long it will take to hike the trail. They also connect them with their "network of vendors" like officiants and makeup artists who are not daunted by a wedding on a cliff.

"We did a sunrise elopement at Mount Rainier and the make-up artist came to the trail head and did the makeup in a U.S. Forest Service bathroom," said Gabi Fox. 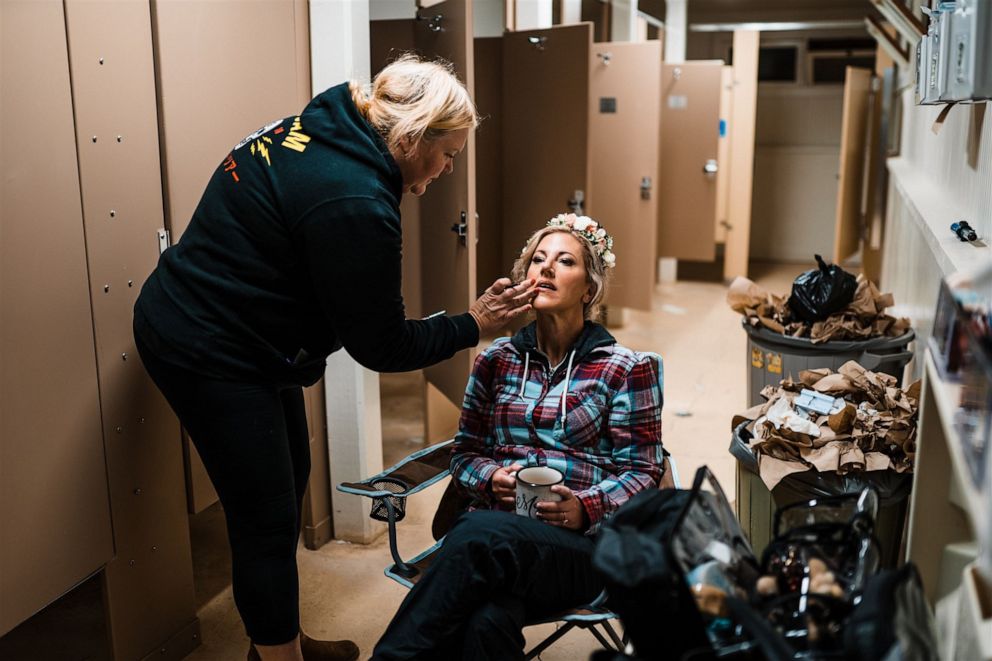 Thefoxesphotography.com
A bride gets her makeup done by makeup artist Anne Timss in a forest service restroom.

The Foxes also hike with the couples to their wedding location, photograph the ceremony and then hike with them back to home base.

During the hike, the Foxes say they try to carry the bulk of the equipment so the bride and groom can enjoy the hike, and not arrive sweaty. They also show couples the tricks of the trade they've learned, like using bungee cords to attach the bride and groom's garment bags to backpacks and using the water bottle holders on backpacks to store the flowers. 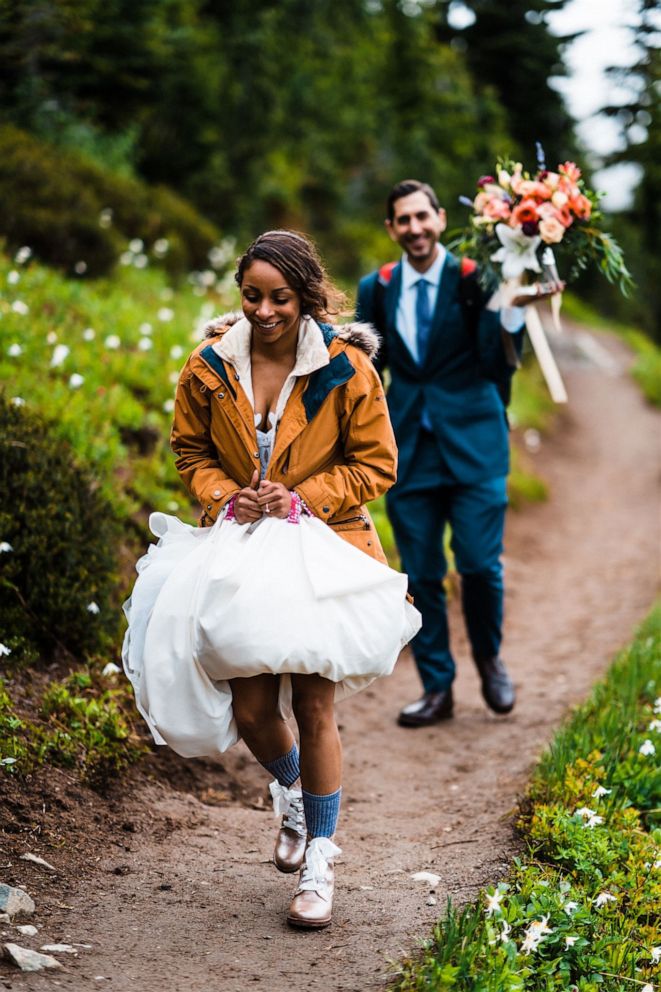 Thefoxesphotography.com
A bride holds her wedding dress while the groom holds the flowers during an adventure elopement. 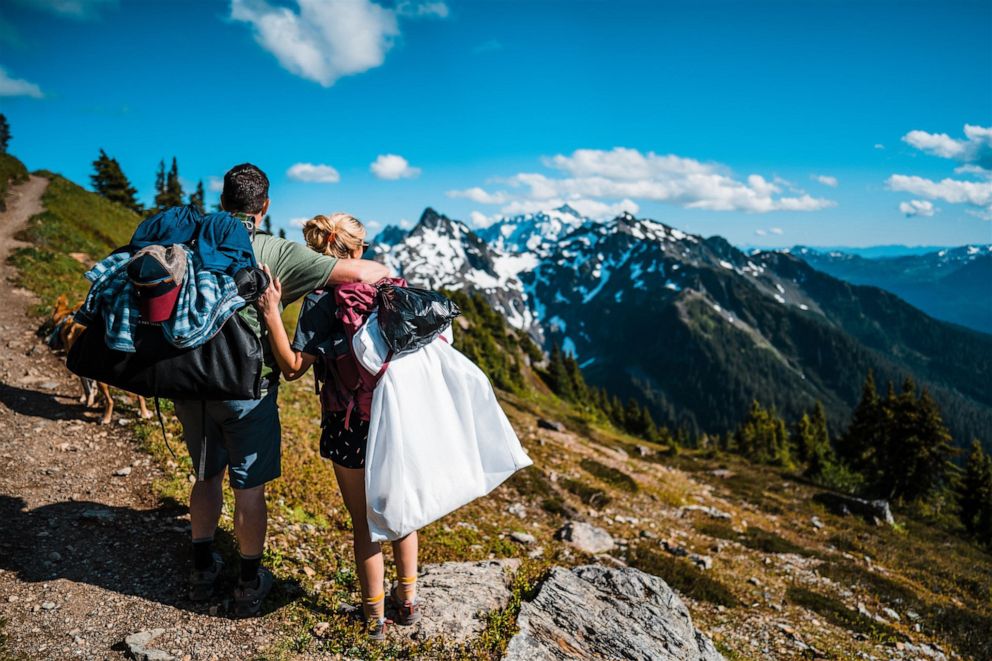 Thefoxesphotography.com
A bride and groom hike with their wedding gown and tux on the way to their adventure elopement.

"We're part pack mules, part your best friends," said Brandon Fox, whose services with his wife run up to $10,000. "We’re spending the entire wedding days with these couples, so we’re technically strangers, but we get to know them so well."

(MORE: As 'wedding loans' soar, here's how to spend smartly so you're not married to debt)

The couples who choose adventure elopements come from across the country but usually are outdoorsy people who have hiked before, according to the Foxes.

Some couples will choose not to go it completely alone and will bring along close family members and friends for the adventure, according to Gabi Fox.

"I overheard one father of the groom tell his son, 'I feel so much more special today than if you’d had a big wedding and I would have spent five minutes with you,'" she recalled. "When couples bring their family, it’s really fun getting to know them and spending the day with them."

Another unique aspect of an adventure elopement is that couples can go back on their anniversaries to the exact spot where they wed, which many couples do, according to the Foxes, who quit their desk jobs in Boston five years ago to travel the country and start their photography business.

They get anniversary notes and baby announcements from past couples whose elopements they've photographed. They also recently photographed a bride who chose an adventure elopement after being a guest at one that took place in a blizzard.

The Foxes have also worked with several couples who went down the route of planning a big wedding -- even getting so far as non-refundable deposits had been paid -- before switching to the more intimate elopement option.

"We have couples tell us, 'We were stressing out. We were doing this for other people and we just decided to change plans and we’re so glad we did,'" Brandon Fox said. "Some people tell us they really don’t want to say their vows in front of a big group of people and some people want to have the biggest adventure of their lives on their big day."

"It’s not for everyone, but for the people who want to do it, it’s a pretty amazing experience," he said.