Editor's Note: In August 2022, President Joe Biden announced a plan to cancel student loan debt for millions of Americans, up to $20,000 for borrowers earning less than $125,000 a year. The plan will either wipe out the federal student loan debt for millions or barely scratch the surface of how much a person owes to their loan provider. In Debt Diaries, we introduce you to those who took on their debt and share the tools to how they paid it off. This story was originally published on June 15, 2022.

Carmen Perez, 35, is the founder and CEO of MUCH, a millennial banking app for millennials and Gen Z. In 2016, Perez decided to get her finances together after she was sued for a student loan she took on in college. She was able to pay off her debt in two years and nine months using a combination of different debt payoff methods. 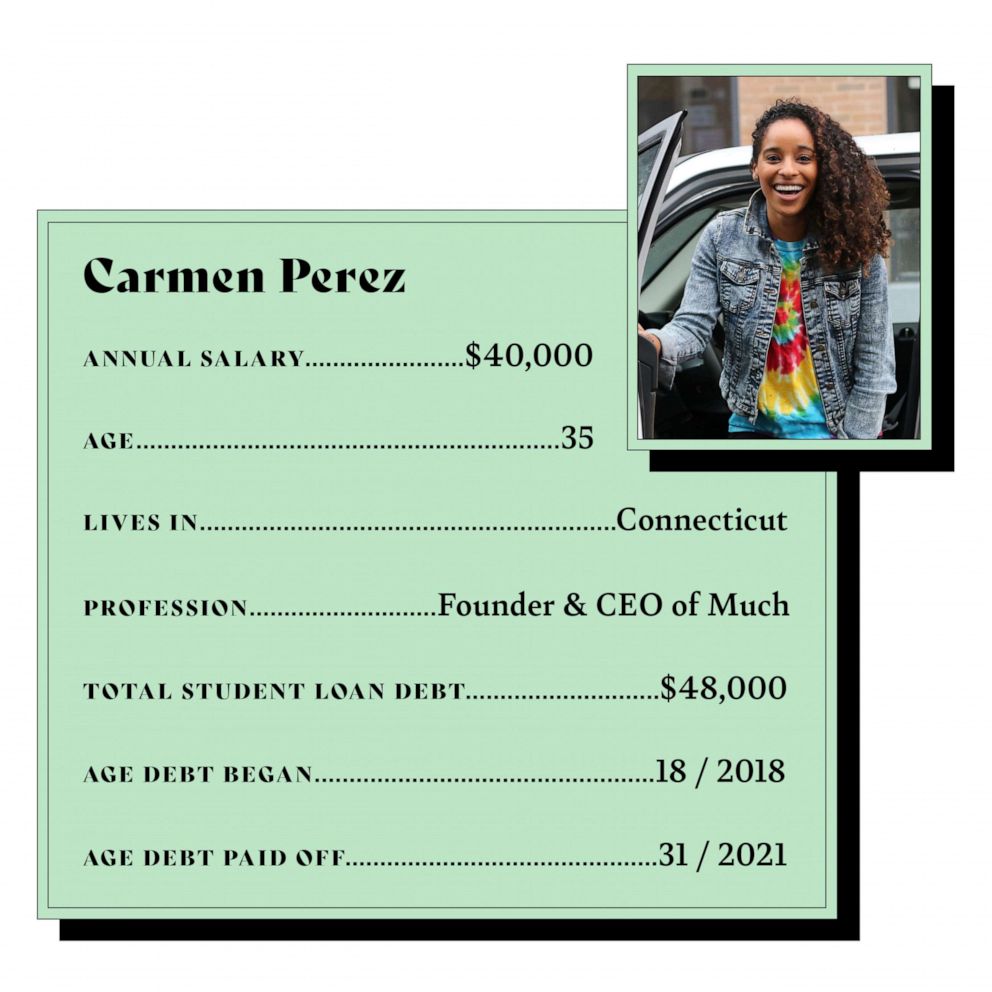 How her student loan debt began

At the start of my college journey, I remember taking out a $5,000 to $10,000 loan. And then ultimately, I ended up signing up for a $20,000 loan, which ballooned to $30,000 once I paid it off. I took out loans because my mom was a single parent and there was no savings for college. So it was really on me to be able to guide myself and fund my college opportunity. The majority of my loans obviously went to covering tuition and then housing.

Living with debt played out in a very interesting way for me in a sense that I was making fairly good money working at various financial firms -- but behind closed doors, I was drowning in debt.

I wasn’t essentially making a good enough amount to really put a dent in a way that would be effective for me. For example, my car loan -- I was paying 18% interest for that and that was all because of bad credit. Typical people might spend $200, I was spending $450, upward of $500 every single month just on my car loan. I felt like I had golden handcuffs on at work. I was just maintaining my job to be able to pay down my debt.

Eventually, in 2016, I got sued for my student loan. I had this mark on my credit, which I didn’t understand at the time, and I didn’t know that it was going to cause so much damage. 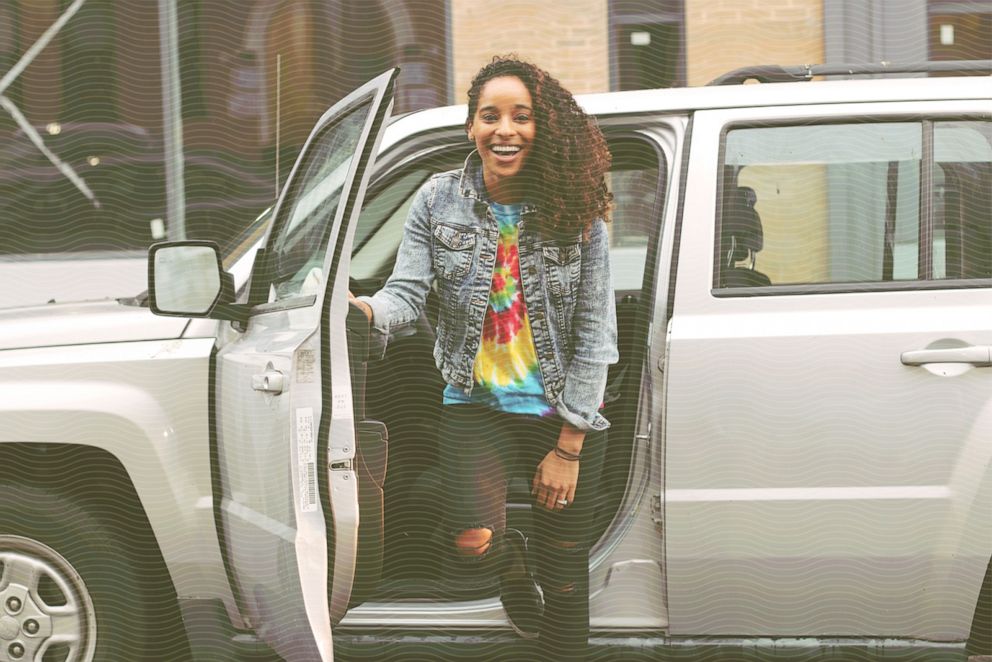 ABC News Photo Illustration
Carmen Perez, 35, poses for a photo with her car.

Prior to that, I had a job offer rescinded from one of the top Wall Street investment banks, because it looked like I defaulted on the student loan, and in theory I did.

Every single time after that, when I would apply for a job, I had this fear looming over my head that I wouldn’t be able to work in my given profession.

Tired of living under the stress of debt

In 2016, I decided to get my finances together. I was like, it’s time, I make fairly good money. I should be able to get out of this debt in a meaningful way, save more. I took an assessment of my life and where I was at and just where I wanted to be, and it wasn’t aligning. So I said, hey, it’s time to tackle my debt.

I got sued three months later for my student loan, so I really had to lean into paying down my debt and just getting my finances together.

Her plan of attack

Fortunately, I had my partner, who I’m now married to. We shared a one-bedroom, one-bath apartment in Queens, which made me [being] able to pay down my debt a little more manageable. 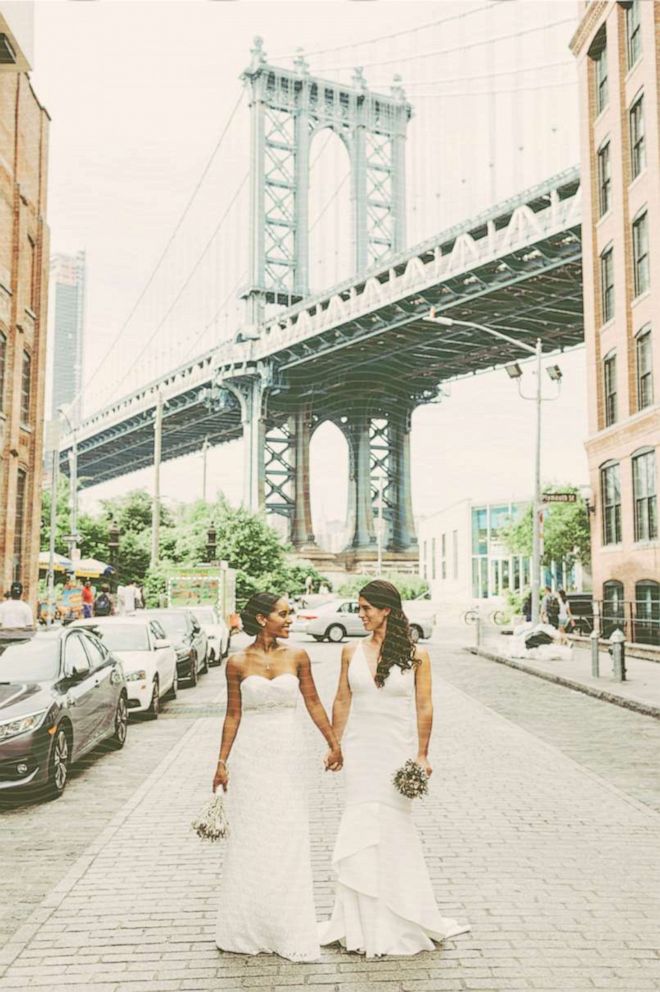 I also got a side hustle to be able to bring on extra money. I stopped contributing to my 401(k), which I do not recommend anyone else [do], but I obviously was getting sued and needed every single cent that I could to be able to pay down this $30,000 loan.

I picked up a side hustle. I was doing photography -- any kind of random gig that I could pick up to get extra money, I was doing. I stopped eating out, started packing my lunch every single day, meal prepping, doing all those things. We cut cable, we kept our rent very, very low -- as low as we could in order for me to have as much money as possible to start tackling these debts. 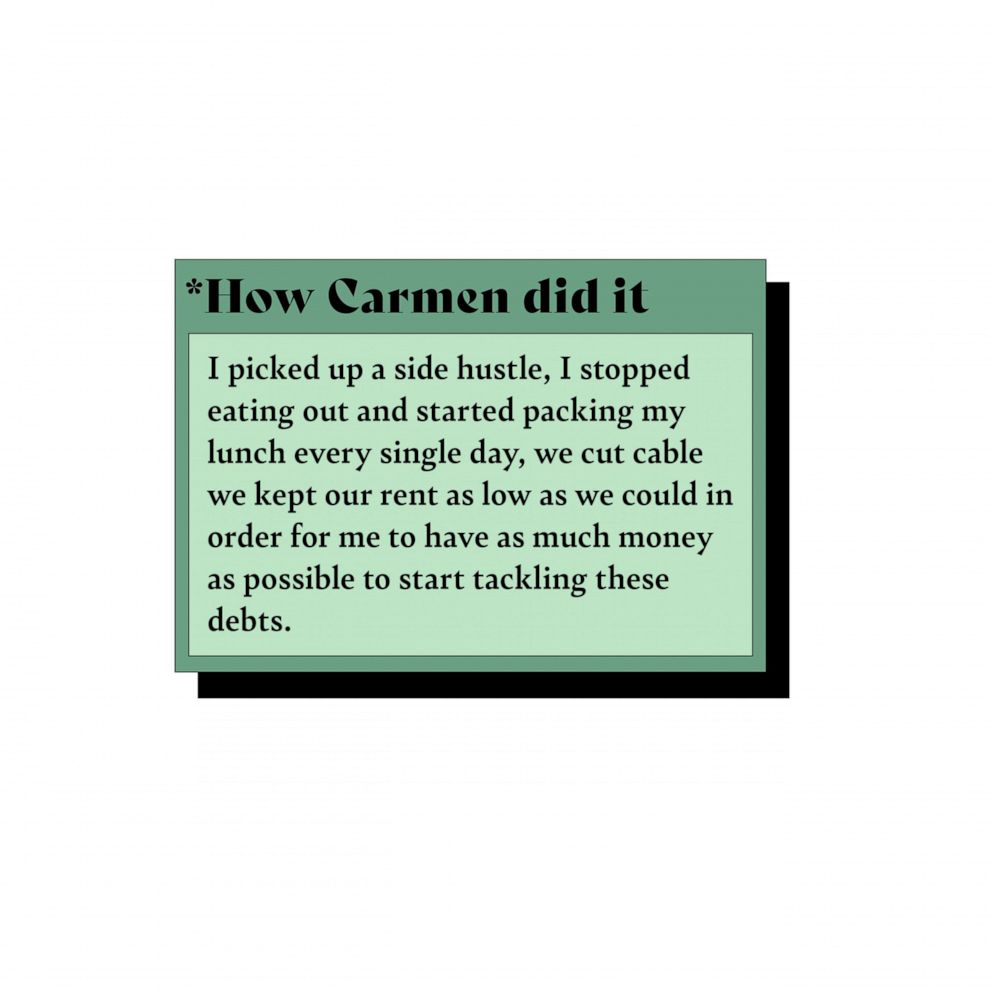 I used several different methods to get out of debt, and that looked like a combination of getting on a budget, a zero-based budget, coupled with a cash envelope system and a debt payoff plan.

MORE: Couple who took out $100,000 loan to start family shares how they planned to go into debt safely

The first thing was a zero-based budget. Before you get paid, you write your take-home pay at the top of a sheet of paper, and then you spend all of that take-home pay on paper until you hit zero, so you have nothing else to spend. And that’s a good way to find areas where you’re being wasteful with money, or you can start setting limits on yourself to just squeeze a little extra out of your budget to put extra toward your debt or toward savings or whatever your goal is.

The next thing I used was the cash envelope system, which is tied to my zero-based budget. Basically, after I sit down every single month to see what areas I could cut or reduce a little bit more, I would tag any of those categories within my budget that I could pull out cash for. For example, if my budget for food was $400, I would go down to the bank every two weeks, pull out $200 and use that for the next two weeks until I got paid again. And that was literally the only money that I used, in these cash envelopes. That really helped me tackle my debt in a meaningful way because I wasn’t overspending.

There’s the debt snowball method, where you arrange your debt from [the] smallest balance to the largest balance, regardless of the interest you owe. You put as much money as possible to the smallest debt while making the minimum payments [on] all of the others until the smallest debt is paid off. And then you roll that money into the next debt and continue the cycle. 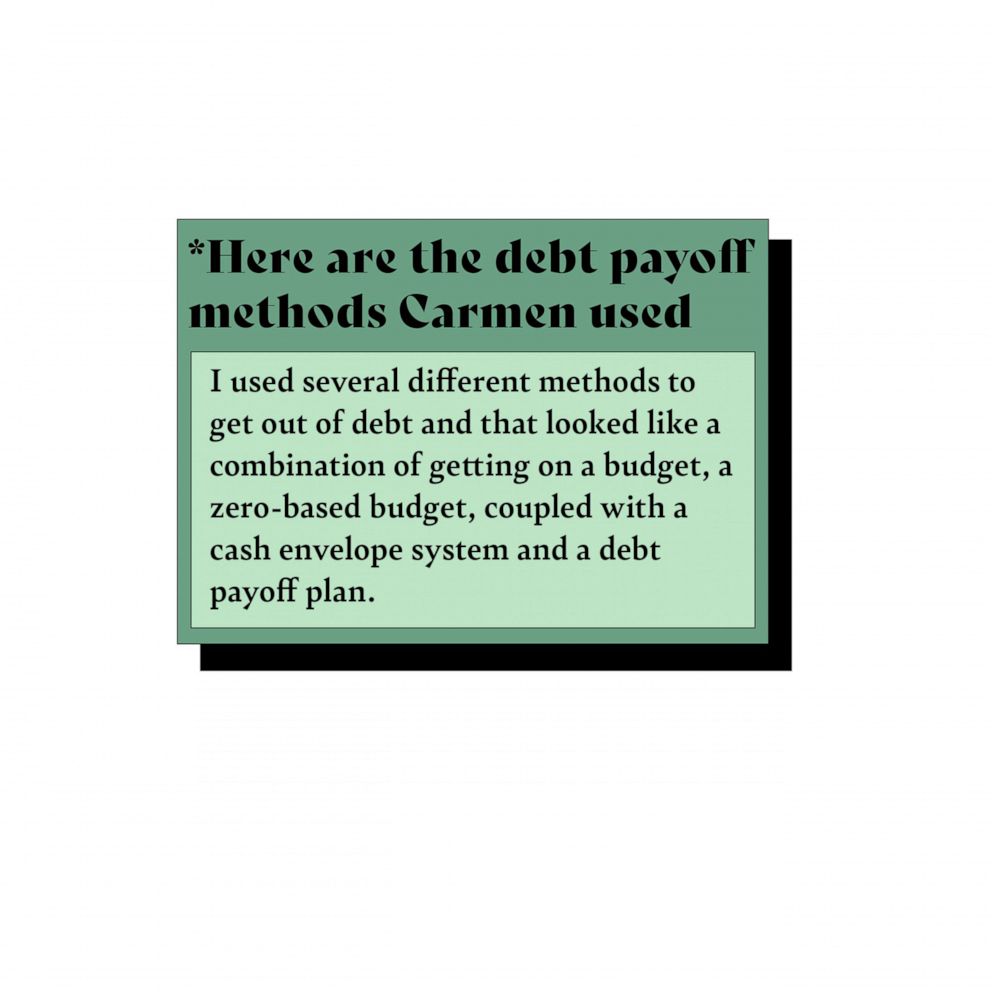 After I became debt-free, the coolest thing was I got to then choose what I wanted to do career-wise.

I had been wanting to learn how to code, specifically for the company that I’m building now, to learn how to do that. I just didn’t know what that looked like, couldn’t afford a developer, any of that. Thankfully, when I paid off my debt, I was able to switch careers into learning how to code specifically for the reason to start my own company, but more so, it gave me another skill and gave me a way to pivot out of industries that [weren't] necessarily serving me, and into something that was just different and could offer me way more money if I wanted it. 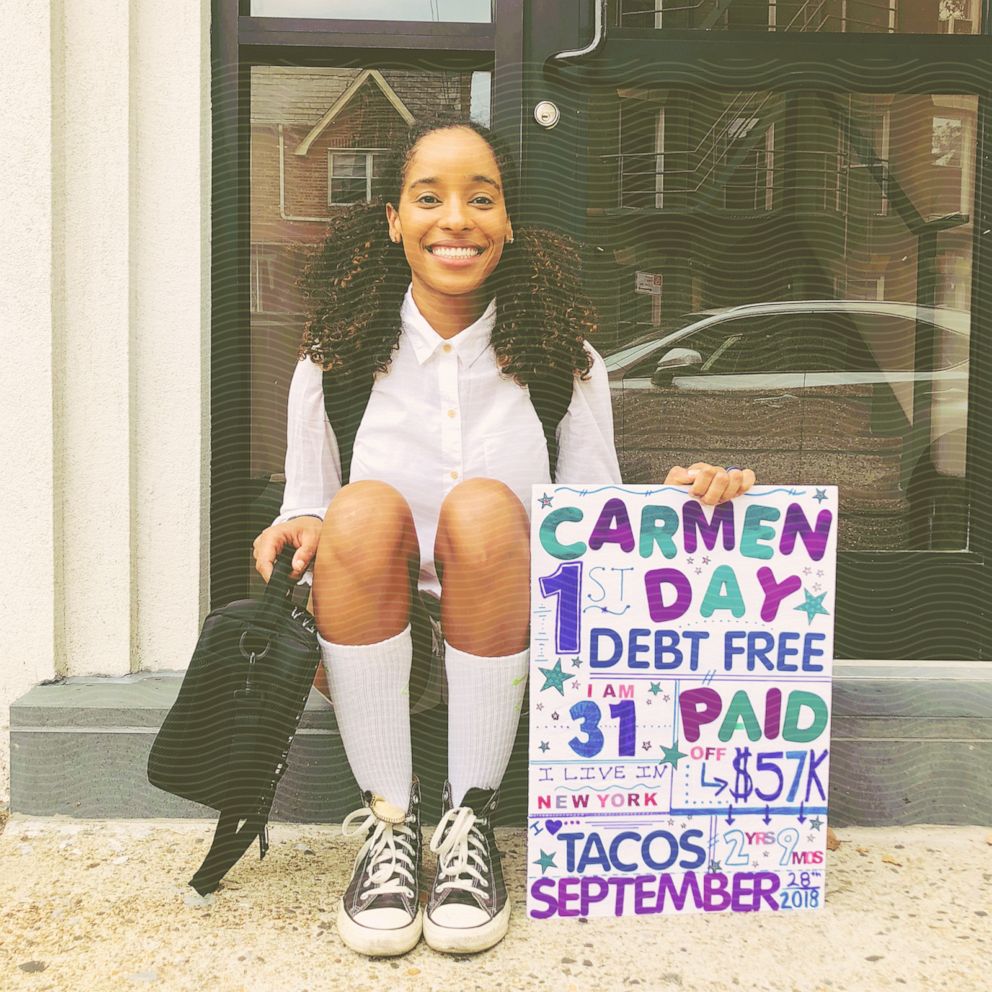 ABC News Photo Illustration
Carmen Perez, 35, poses for a photo after she paid off her debt.

Inflation has gotten crazy, as we all know. I’m on a tight budget already, so it’s caused me to make sure I’m paying way more attention to my money and the skills that I learned to get out of debt are the same skills that I’m using now.

MORE: How she paid $180K in student debt with monthly interest almost as much as her rent

When you form a habit over two years, it sticks with you. So I’m still budgeting.