One-third of adults age 30 or younger have student loan debt, with the median burden hovering at $17,000. In Debt Diaries, we introduce you to those who took on debt and came away with a better understanding of themselves. Their testimonials offer hope -- and tools -- to show that you, too, can overcome debt.

Dominique Jackson is a journalist from Columbus, Ohio. In December, she celebrated paying off her $30,000 in student loans in three years by following advice from financial gurus Dave Ramsey and Tiffany the Budgetnista and also leaning on her co-workers for tips, too. As a side hustle, Jackson runs Girl Around the Globe, a traveling sisterhood of women who want to pay down debt and travel the world. 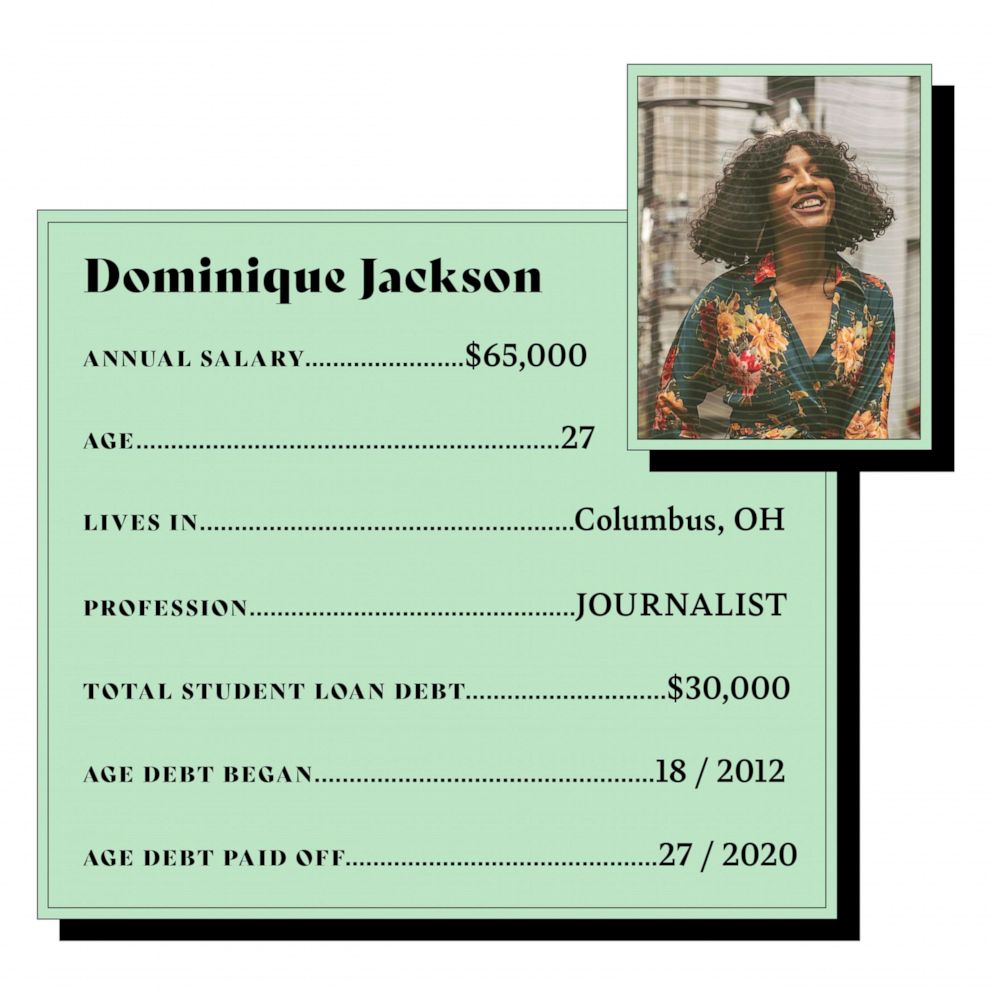 How her student loan debt began

My freshman year I went to school at Capital University. It was a small school in Columbus, Ohio. I just took out the debt to cover the basics -- the unsubsidized and subsidized federal loans that were offered to me. I didn’t have a ton of scholarships my freshman year. 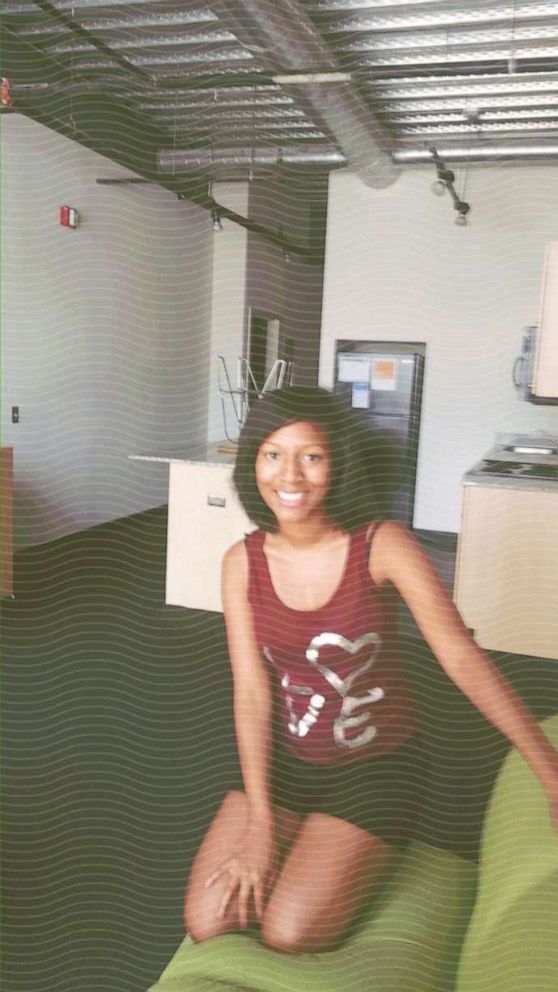 And then I decided I wanted to transfer to Columbia College Chicago, because Capital was just a really small school, and they didn’t have my major. Once I transferred to an out-of-state school, I had to take out even more loans. I think I received a Pell Grant, and then, through Columbia, I did receive a few journalism scholarships.

Editor's Picks
MORE: This couple went from RV to homeowners after paying off $130K in debt together

I was very aware of my debt, because I take care of myself financially for the most part. I was going to school out of state, and I didn’t have any immediate family in Chicago, so I was really living on my own for the first time, and I definitely felt the burden of it.

I was a resident assistant (RA) for two years, which is one thing that kept my debt down a little bit. I was just applying for positions that would cover room and board. But throughout college, especially my senior year, is when it hit me. I didn’t have a job lined up after college.

I just remember those months leading up to graduation, feeling like I was just in a daze of like, "Was this a good decision? Was it not a good decision? Now I’m going to have all this debt that I don’t even understand." 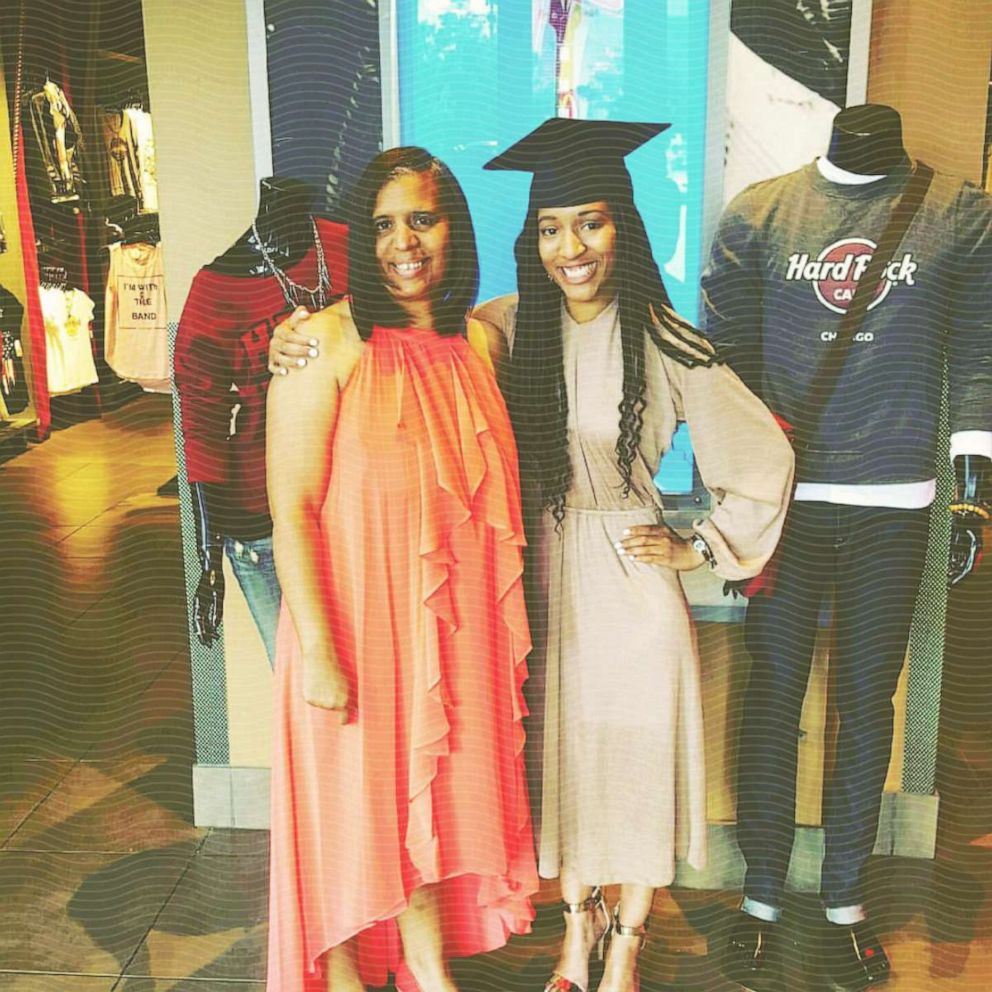 Getting started with savings and delayed gratification

I got laid off twice before I was 25. I got laid off first as a marketing manager at a nonprofit, and then in May 2019, I got laid off from my job as a breaking news reporter. And during the first layoff, I was like, "Ugh. I’m broke again." My whole life is dependent on getting a paycheck, spending it, saving it, getting a paycheck, spending it, saving it. I realized my life was just so entangled into a job to be my provider that I didn’t have a savings. I had no money, no savings -- it was terrible. So when I got laid off, there was like a moment that clicked for me like, "You need to get your life together financially." 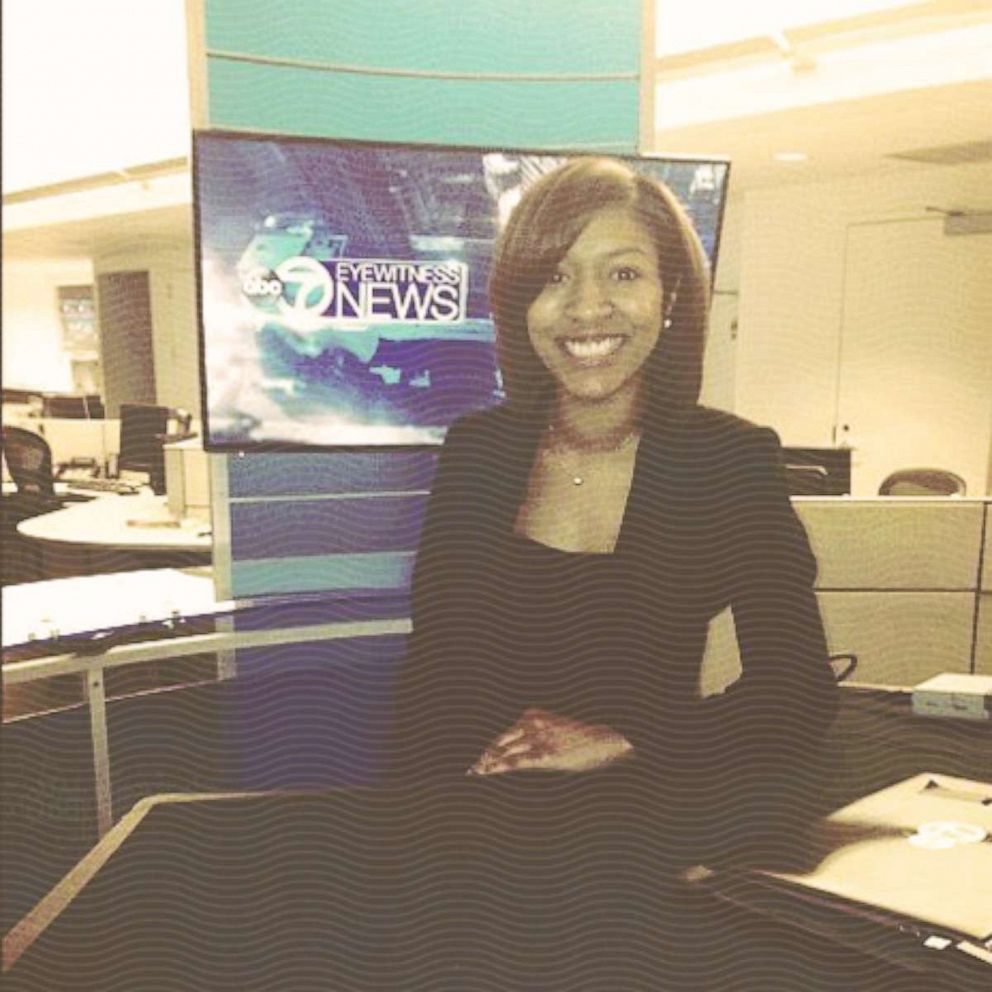 Dominique Jackso
Dominique poses for a photo during a television internship.

So I saved six months to a year of living expenses, wasn’t really thinking about my debt at the time. I was just paying the minimum just to keep them off my back, like my little $100 or whatever, not even making a dent in it.

Then comes 2019 -- I was working as a breaking news reporter, and it was remote, too. I remember I really liked that job, it was cool, I was in my field, and it was a remote job, so I thought maybe I’ll move, maybe I’ll take my little remote job abroad, maybe I’ll travel with it -- who knows. I had moved back home just for a month to get my life in order, because I was preparing for this big move that I thought was about to happen, and when I got home, I got laid off. [If anybody wants to go into journalism, beware. It’s a tough field.]

I went on another massive job hunt, and I found a job in a month as a social media editor for The Daily Beast. They offered me the option to work remotely, or I could move to New York. [I decided] to stay home, and that’s when I went into paying off debt mode, decreasing my expenses, not eating out a ton. I think that was probably the defining moment of just like getting laid off so many times and then deciding not to move to New York. 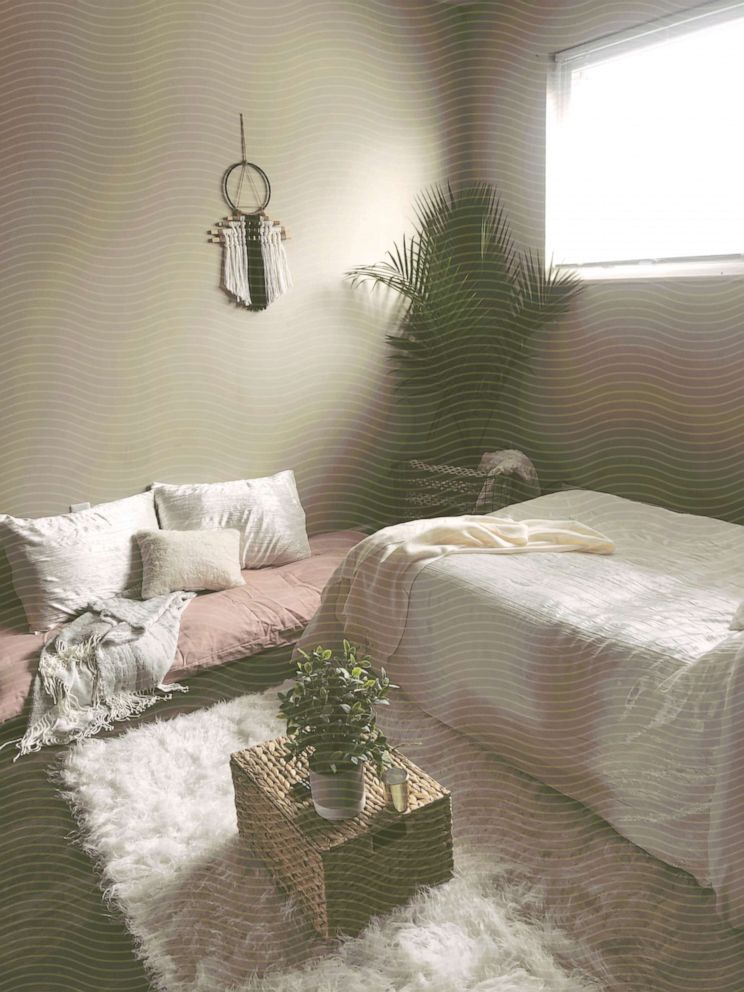 Taylor Mahoney and Kelly Wilkerson
A photo of Dominique’s studio in Columbus, Ohio. Part of Dominique’s debt free journey was making the decision to live at home than moving to New York to pay off her debt.
MORE: Debt Diaries: She paid off a $102K student loan and bought a house in the same month

How she did it

I had loans from two different schools, so I had consolidated my loans. I wasn’t given an option. They called me one day and said, you can either consolidate your loans now, or we’re going to garnish your wages. I don’t even know if that’s legal, but I got a phone call, and those were the options I was given.

The main resource that I used was called Undebt It -- they have a free debt calculator. When I was trying to pay off my debt, I just thought things were so confusing. It’s a really simple calculator that you can just put in your debt, you put in your interest rate, and it populates a plan for you. And that could be the avalanche method, or it could be the snowball method. I printed off that plan, and I had it on my phone. 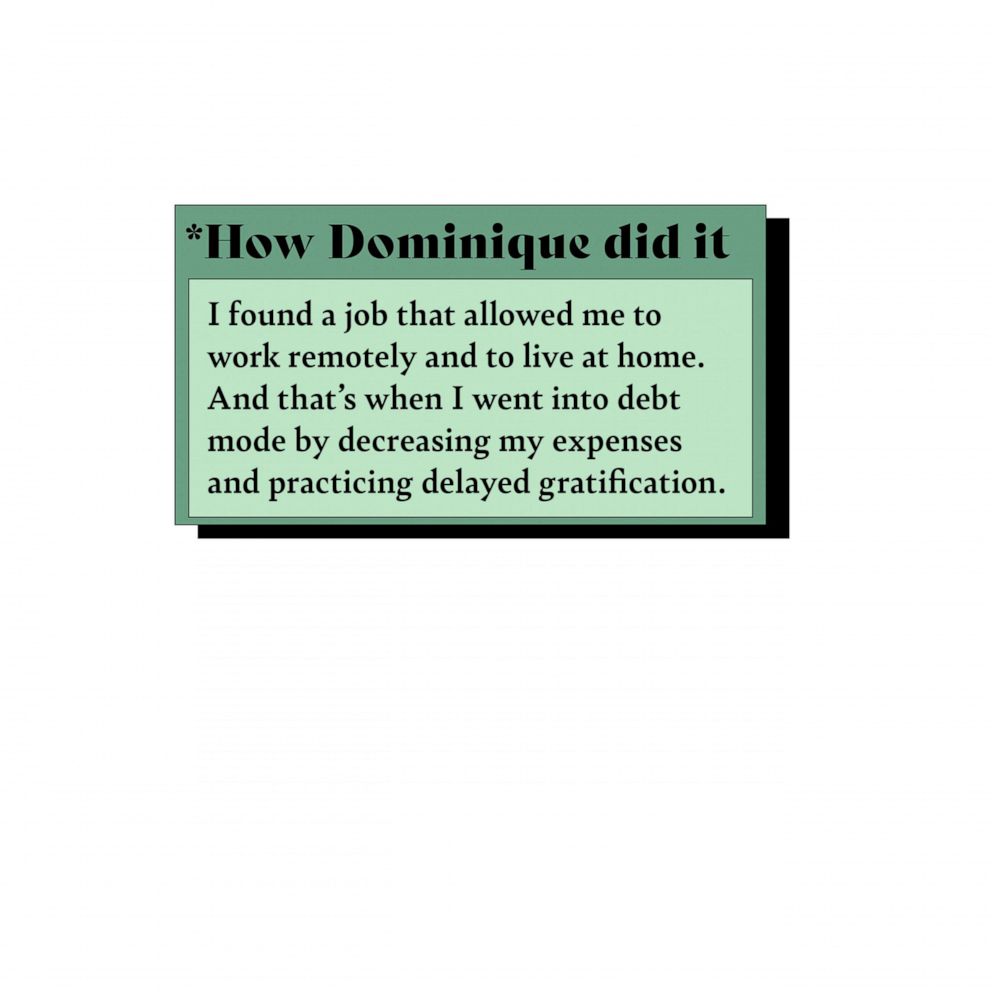 ABC News
How Dominique did it
MORE: A zero based budget helped this woman pay off $215k worth of student loan debt in 4 years

I did a lot of side hustles. I build websites, I do social media management, I do freelance writing, I negotiated my salary at The Daily Beast.

Seeing all the financial gurus on Instagram was also super helpful. Dave Ramsey is like a golden ticket, Tiffany the Budgetnista is really good -- there’s a guy on Instagram called Leo Jean-Louis. I think for me, it was really just community. But when I saw my co-worker, Mandy Velez, pay off $100,000 in debt, I felt like I could relate. We’re the same age, we’re both minorities, we’re both at the same job. It was just so many similarities.

It was really helpful to see a tangible person who I felt like I could relate to pay off her debt. Just the representation of seeing somebody -- a woman of color -- pay off this debt. I just thought if she can do it, then I can do it. 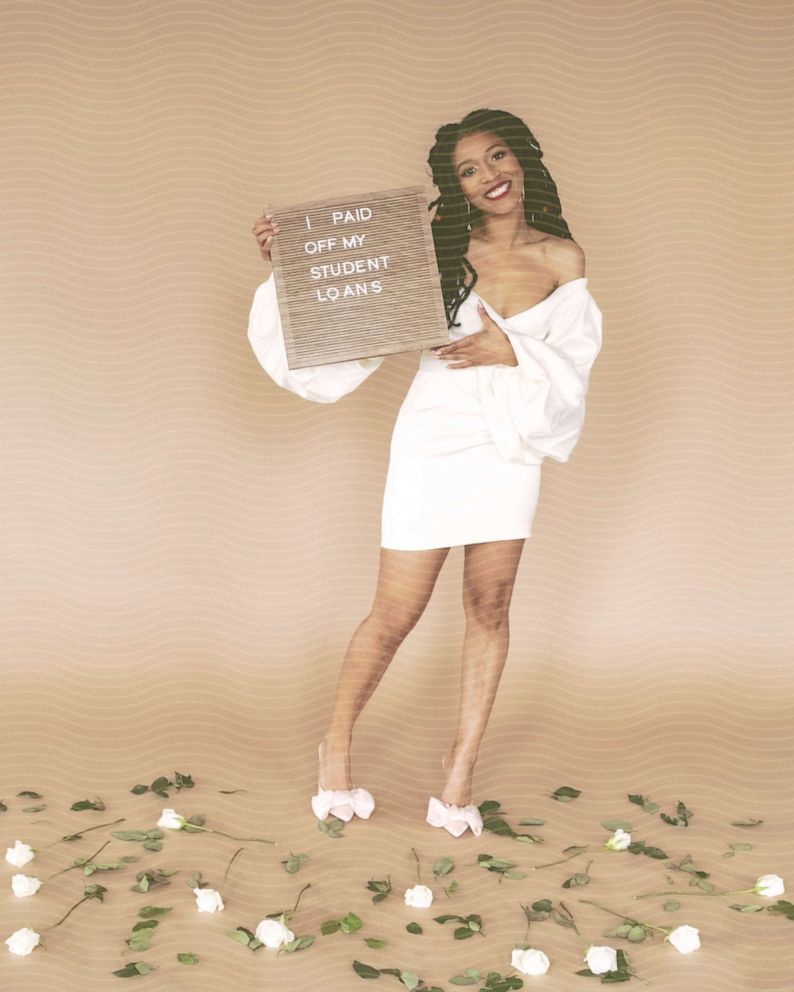 Imagery by Abby Kamagate
Dominique Jackson, 27, paid off $30,000 in student loan debt in December 2020. To celebrate, she had a photo shoot.

I really believed I could be debt-free because I saw somebody else do it. So I hope that it inspires somebody to look at my life and my life story and be like, "Wow, if Dominique did it, then so can I."

I also just wanted to have a play on words. As women, we say "yes" and we say "I do" to a lot of things and for marriage. But what if you just decide to say "yes" to yourself first and celebrate yourself outside the traditional things that we celebrate, like marriage and babies -- because women are just so much more than what we can do for other people.

We have to get really specific about what we want. No more vague goals in 2021. And when it comes to our finances, you have to get specific about what that looks like for you. A lot of times we make goals that are like, "I want to get better at my finances," and then we just don’t define it. So therefore, we don’t know how to move forward, and what doesn’t get defined doesn’t get done. For anybody who wants to improve their finances, definitely start small and start where you’re at.

Also, if you’re currently trying to pay off your student debt, take your time. A lot of people don’t even get to that point where they’re ready to be serious about paying off their debt. So while you’re taking these strides financially, negotiating your salary, learning how to budget -- just also take account of your mental health and remember, there’s no rush.

You can follow Dominique's journey, receive debt-free resources, tips and coaching opportunities by following her on Instagram @DominiqueJackson.