When Jillian Hanson and Max Allegretti walked down the aisle on Friday, Oct. 18, the young couple wasn't just celebrating their future -- they were celebrating life itself.

In July 2017, Hanson was diagnosed with stage 2 breast cancer. Facing a diagnosis at just 25, she had no idea what to expect, but she knew it wasn't going to be an easy road.

She offered her boyfriend an "out."

(MORE: Bride with stage 4 cancer enjoys 'beautiful' wedding despite doctors' urging her to push up the date)

"I brought it to the table and told him this was going to be a lot," Hanson shared with "Good Morning America."

But Allegretti didn't flinch. Instead, he dropped everything to be by his girlfriend's side, making it his mission to be her rock and support her throughout the highs and lows. 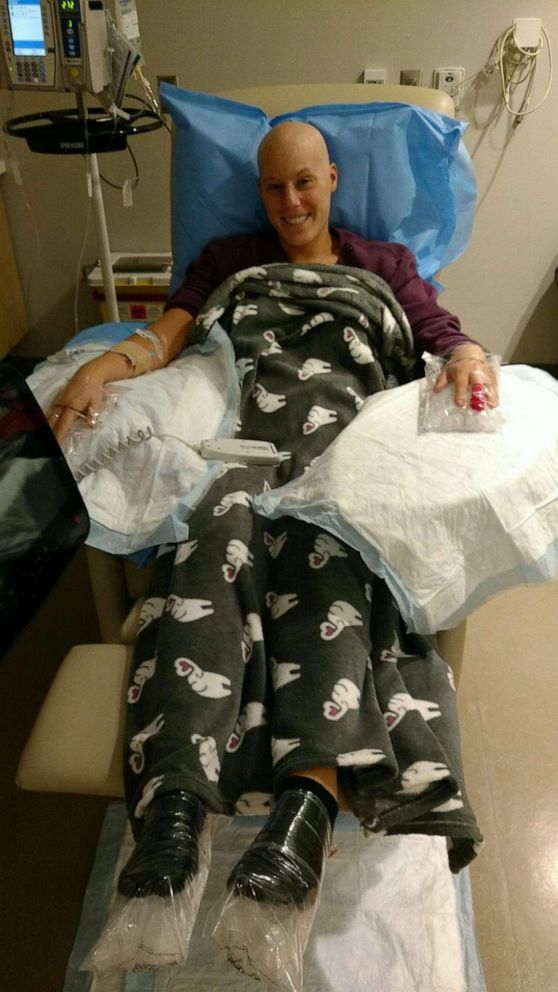 Throughout it all, Allegretti was by her side and did his best to keep their romance alive.

"Even though it was hard for Jil to go out and have energy, I tried to plan little things here and there, surprises, going to the movies … just to normalize the situation," he told "GMA."

"They tell you how sick you get during treatment, but no one can really prepare you for any of this," Hanson wrote in a personal essay. "He took care of me every day and reminded me how beautiful I was -- even as my hair thinned and fell out, and my skin turned white as a ghost."

On her last day of chemotherapy on Feb. 28, 2018, Allegretti had a surprise up his sleeve: a proposal.

(MORE: Bride shaves her head 2 months before her wedding to honor late mother who died from cancer)

"I was thinking about it for a long time," Allegretti explained. "I spoke with her family and friends, and we all decided it would bring a lot more joy even to the special day it was going to be already."

In a video of the proposal, Hanson is surrounded by her nurses and family when Allegretti walks in and asks for her hand in marriage. She was shocked. When she replied "yes," the room burst into cheers.

"I wasn't expecting it; he made this big elaborate plan of the day," Hanson shared. "That was the ultimate high -- getting engaged brought great light to me after a really dark spot." 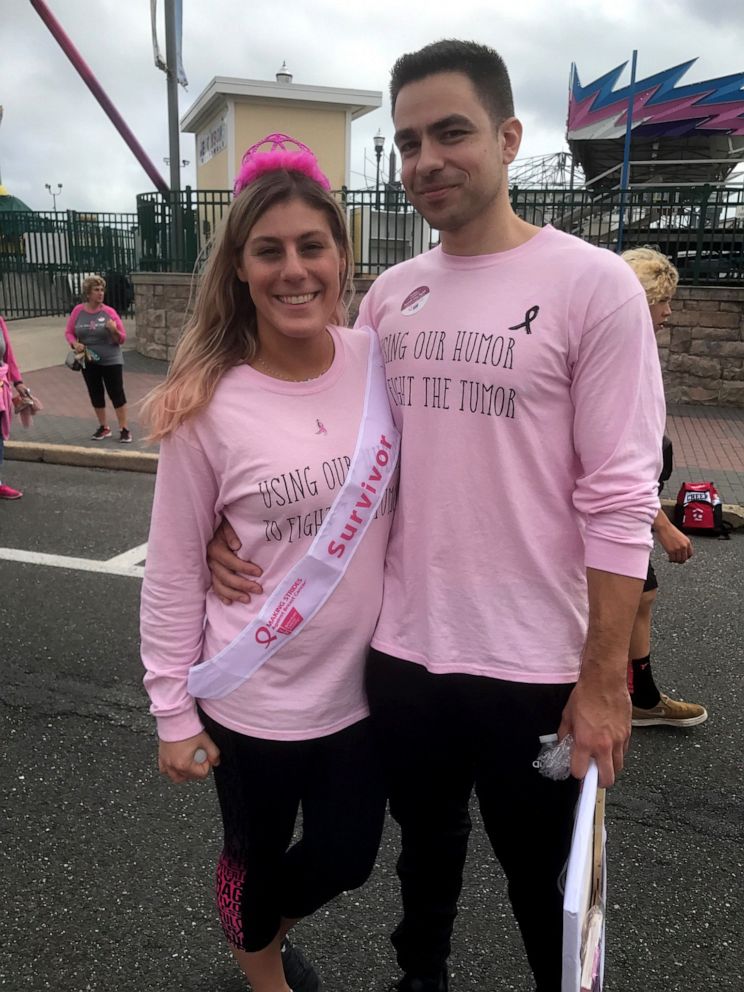 via Jillian Hanson
Jillian Hanson gave her boyfriend Max Allegretti an "out" after she was diagnosed with cancer, but Allegretti became her rock, supporting her throughout the highs and lows of her battle.

Despite the joy of the day, Hanson still had a long road ahead of her with additional treatments, tests and therapy. Planning a wedding -- let alone the financial burden of a wedding -- was not at the top of her mind.

But sometimes worlds collide. In October 2018, during Breast Cancer Awareness Month, Hanson and Allegretti met Lauren Grech at a fundraiser for Breasties, an organization Hanson became involved with after her breast cancer diagnosis.

Grech is the founder of the wedding planning company LLG Events, and she was inspired by their story. Grech became determined to surprise the engaged couple with the gift of a lifetime. 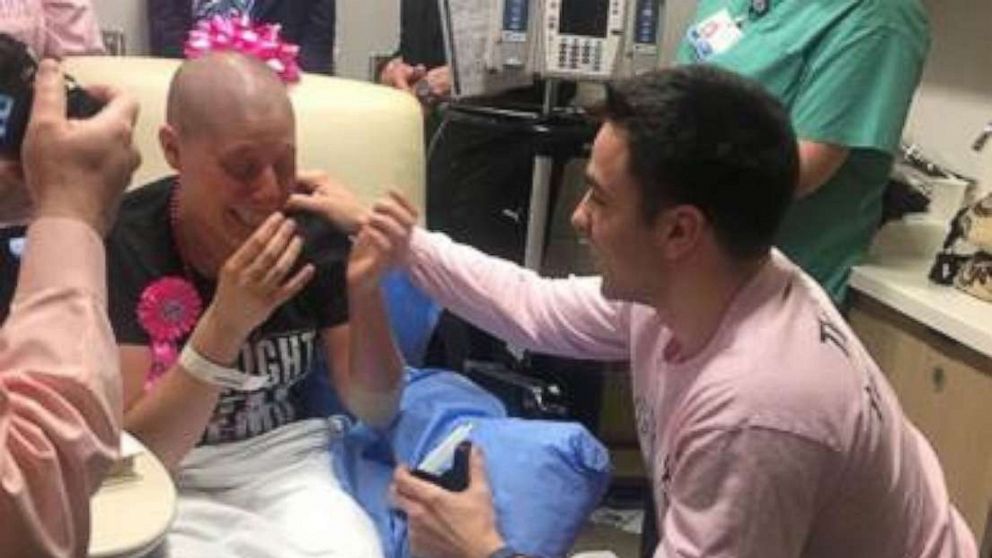 via Jillian Hanson
Max Allegretti proposed to Jillian Hanson on February 28, 2018, after her last session of chemotherapy at Memorial Sloan Kettering Monmouth in Middletown, New Jersey.

In addition to donating her full wedding planning services, Grech's LLG Events gathered free services from a variety of wedding vendors. This included The Sterling Ballroom to host the ceremony, Magic Moments to do the music, Susan Shek Photography and Frank Ahn Films to capture the event, Fede Insieme to provide hair and makeup for four people, and Palermo's for the wedding cake.

"I put that dress on and I didn't care about anything else," Hanson said with a shocked reaction in a video filmed by her fiancé. "I felt so amazing in it."

"I wanted to get this girl what she deserves and to feel like every other bride feels on their wedding day … to feel special," Grech said. 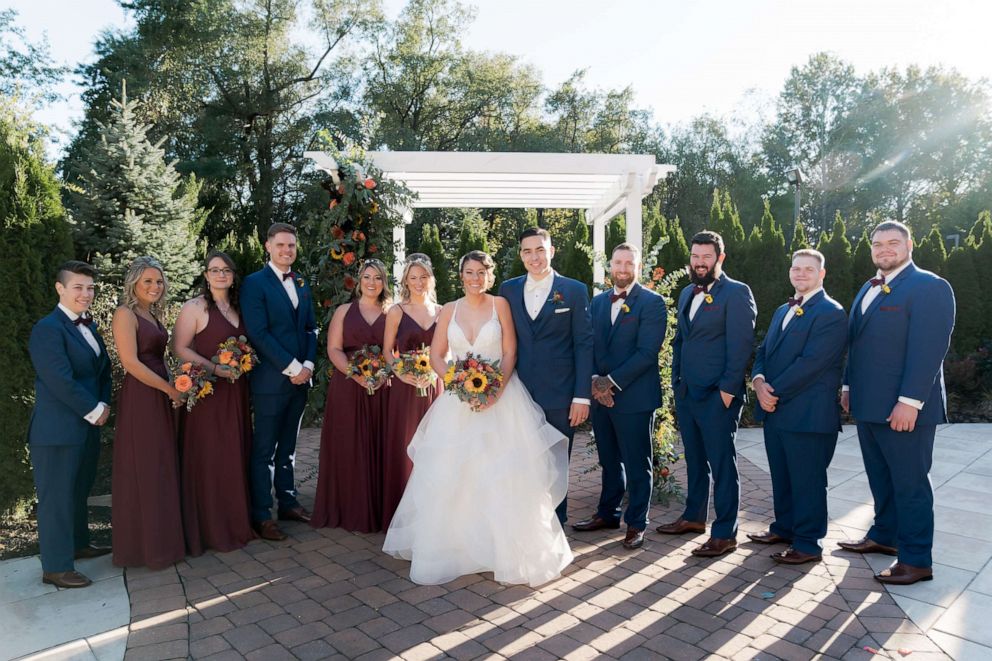 Susan Shek/Susan Shek Photography
Jillian Hanson and Max Allegretti with their wedding party. The pair were married on Saturday, October 18, 2019.

The magnitude of the gift was not lost on the couple.

"I wanted to give Jil an amazing wedding and there was no way we could have done it without them," Allegretti said.

"It's been such a long and painful road, and there have been so many people there for us," Hanson explained. "[This wedding] is celebrating everything -- marriage, life, love, everything."

As for the newlyweds and life ahead, the couple has some advice for others going through a difficult time.

"Be there as much as you can for the other person and keep in mind it's temporary, and you will get back to who you were," Allegretti said. "In our case, we came out stronger and better."

In their case, it was a "happily ever after," after all.