By Yi-Jin Yu
Video by Nidhi Singh
Share —
Sign up for our newsletters to get GMA delivered to your inbox every morning!

If shelter dogs could speak or write, what would they say?

Forty-two second-graders at St. Michael's Episcopal School in Richmond, Virginia, imagined those stories and created heartwarming letters and drawings on behalf of 24 dogs and one cat awaiting adoption at a local shelter.

"Hi my name is Sleigh Ride! Do you want to adopt me? You can train me if you want! Can you put a heart on my collar? I am a girl. Who are you?" begins one adorable note by Winnie Rice.

"You can snuggle with me! I promise that I will be a good dog. You can even sleep with me if you want! I love going on walks and playing outside. I am a medium sized dog. I'm getting bored of this place. Would you love me forever? Love, a cute puppy." 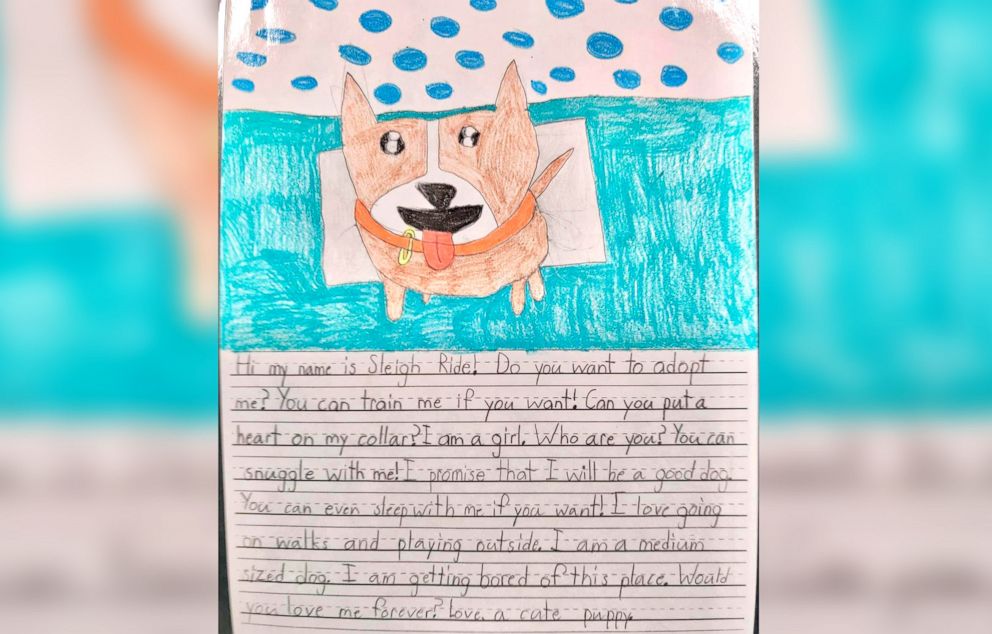 Another compelling letter from Aubrey Consolvo reads, "Hello, My name is Sunday Special. I would love to be adopted. If you do adopt me, I hope I will brighten up your Sundays like the SUN! You'll be my Sunday Special, and I hope I'll be yours!" 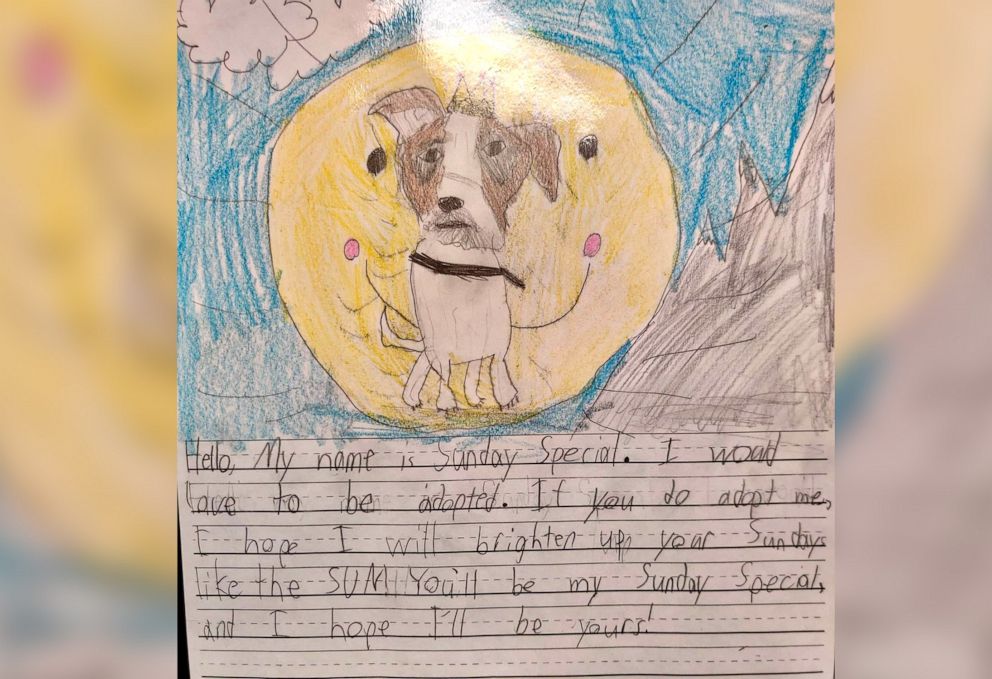 St. Michael's Episcopal School
Second-grade teacher Kensey Jones said one of her favorite notes is one for a dog named "Sunday Special."

Their creative endeavor was the brainchild of teacher Kensey Jones, who has been teaching second graders at St. Michael's for the last eight years but has also been volunteering on the weekends at Richmond Animal Care and Control.

"The idea came to me that I could connect [the students'] persuasive writing paragraphs with something real in the community," Jones told "Good Morning America."

"She emailed me back in January, and was like, 'You can say no, but what do you think about this idea of having the kids write persuasive writing, like from the perspective of one of the shelter dogs?' and I thought it was an amazing idea," Christie Chipps Peters, the director of RACC recalled to "GMA." "It sort of just grew from there. She's a genius and we were happy to be part of it."

Peters arranged for the St. Michael's students to meet with Snow, a 10-week-old American pit bull-terrier puppy who was waiting to be adopted from RACC's shelter. On Jan. 31, the students learned about RACC's mission and how they could help some of the animals considered "less desirable" by potential adopters, typically older dogs and pit bulls, according to Peters. 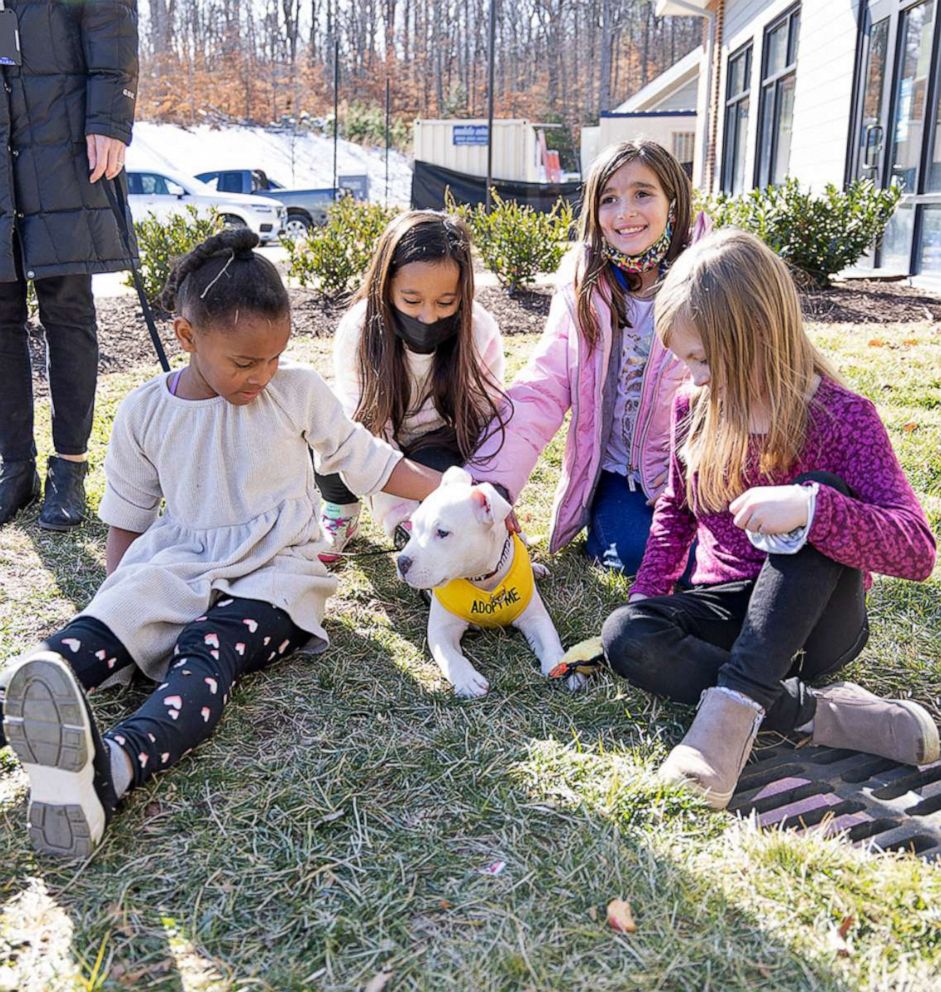 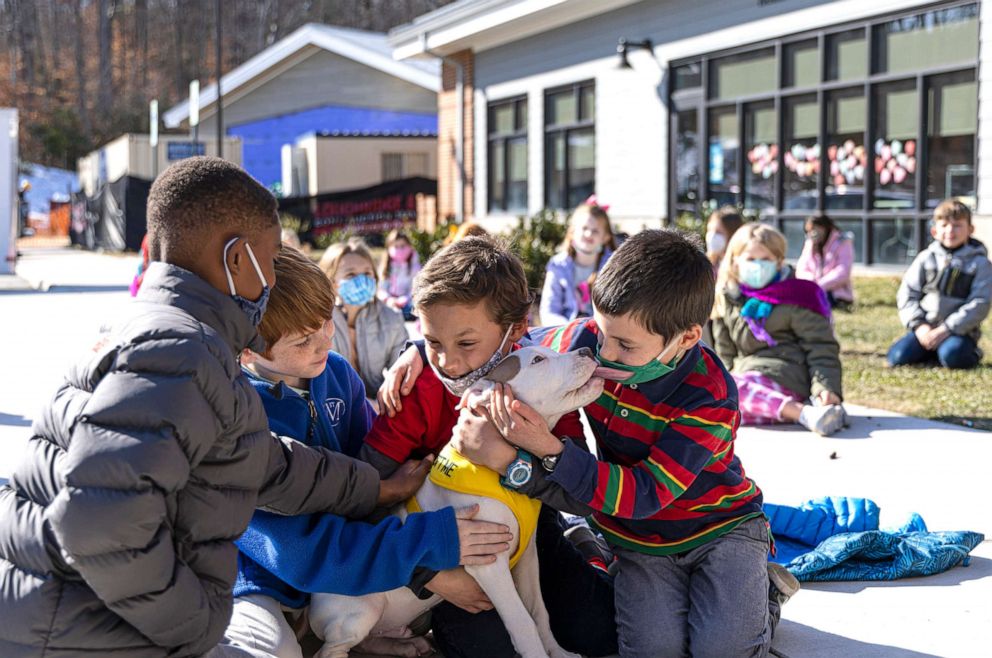 "We're the only open-admission shelter in the city of Richmond, which means we take in every animal regardless of health or behavior," Peters explained. "We typically take in around 3,000 animals a year and we take in everything, not just dogs and cats -- we've had monkeys and alligators and snakes. We respond to every call for service. And then we have wonderful volunteers and an adoption team that really work hard to try and find forever homes for the animals in our care."

MORE: What you need to know about adopting dogs

According to Jones, her 7- and 8-year-old students, including Peters' own son, were excited to tackle their persuasive writing project after meeting Snow. "They actually wrote these paragraphs very quickly because of the excitement," she said.

Danielle Petroski, one of Jones' students, said in a press release from the school that she was "so very happy" to help get dogs adopted. "All dogs deserve a loving home, especially Snow [the puppy ambassador]. I am so very happy to be able to help neglected animals find great forever families." 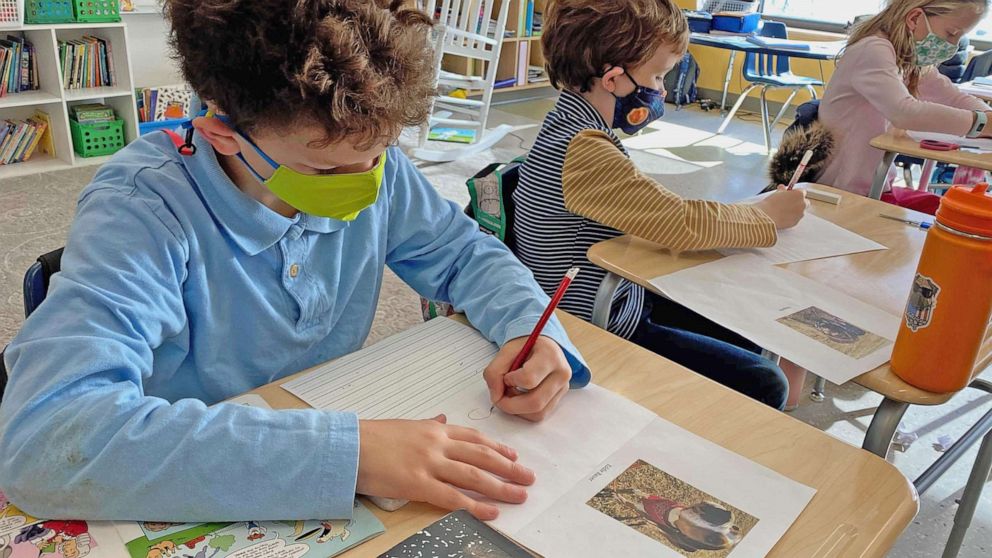 "The stories are so sweet," Peters said. "Children write the best anyway because they have no filter and they're honest and kind and it just comes from such a sweet spot. They haven't yet been jaded. Reading their stories and looking at that sweet dog in the cage, I think just speaks volumes to moving on the emotional side of things." 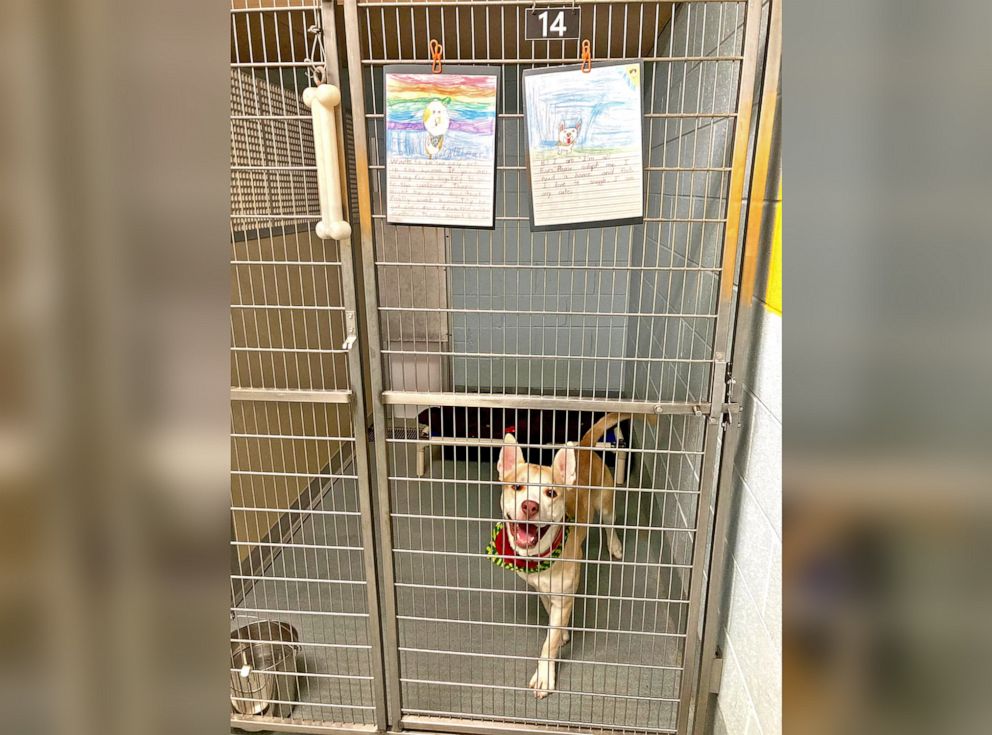 Richmond Animal Care and Control
"I'm All Ears" is one of the 24 dogs for which students wrote notes and drew illustrations to help with pet adoptions.

Since the students' work was showcased, 20 of the 24 dogs and the sole cat have found their fur-ever homes. "Many of the dogs were adopted, I think eight or nine went home within that first weekend," Jones said.

"I didn't think they would get adopted," Peters added. "I mean, I really didn't have an expectation. So anything was good, but I was surprised that they got adopted that quickly." 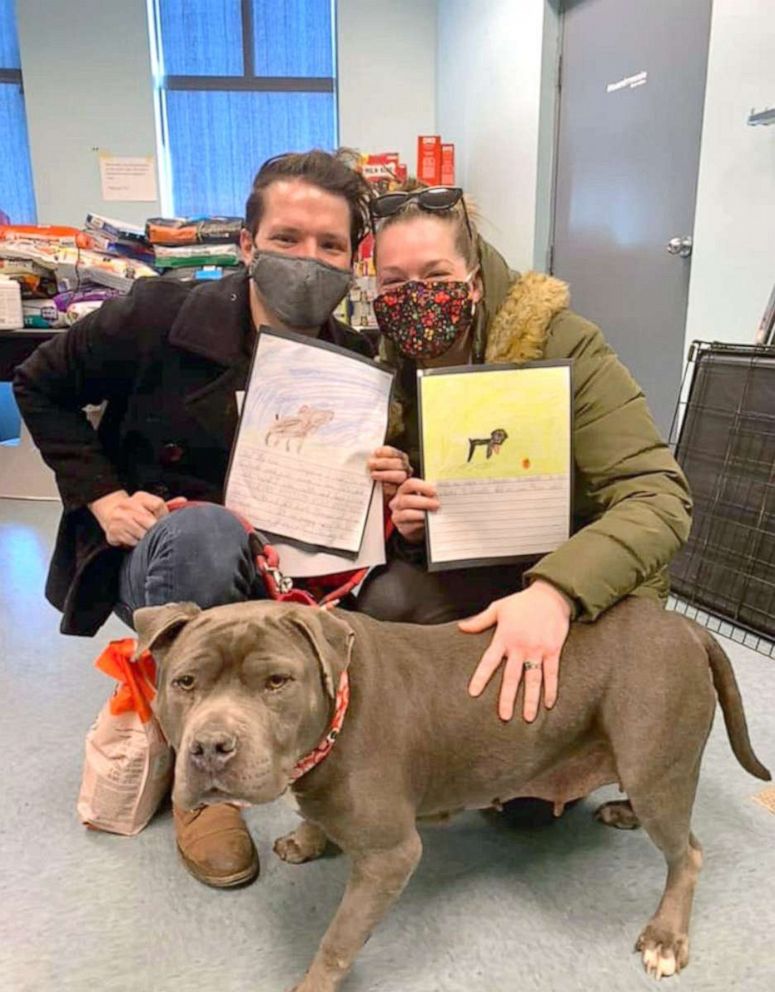 Richmond Animal Care and Control
Duquesa's new family poses for a portrait after her adoption. 20 of 24 dogs have been adopted since students wrote letters for them.

The children were able to get a virtual tour of the shelter through social media and they receive updates every time a dog they've helped gets adopted. Jones added that through this assignment, the students have been able to see what a difference they can make in their community and how powerful their voices can be.

"They cheer with excitement when they see that their animal has gone home. There was a lot of happiness in our classroom when I was showing the Facebook Live videos and they could see their dog. They really connected and that became their dog," Jones said.

Jones said she's "very proud" of what her second graders have produced, learning how to use more descriptive words and build "beautiful, longer sentences." She hopes to repeat the assignment next year with a new group of students.

"They have grown as writers. They love to write now. I've moved on to some other writing assignments and they are very excited about each of them. In fact, they ask me if they finish something early, if they can write, so that makes me super proud as a teacher," she said.

Peters said RACC would love to collaborate with students again. "We will definitely do it in the future. ... I think I would do it again in a heartbeat," she said.