As American athletes competed in the 2022 Winter Olympics in Beijing this weekend, a quartet of Summer Olympic athletes scored their own victories at home in the United States.

Four gymnasts who competed in the Tokyo Olympics for Team USA last summer each scored a perfect 10s at college meets this weekend.

The athletes -- Auburn's Suni Lee, UCLA’s Jordan Chiles, Oregon State's Jade Carey and Utah’s Grace McCallum -- all earned the perfect scores within a span of 48 hours, and it was each athlete's first perfect score at the collegiate level, according to ESPN. 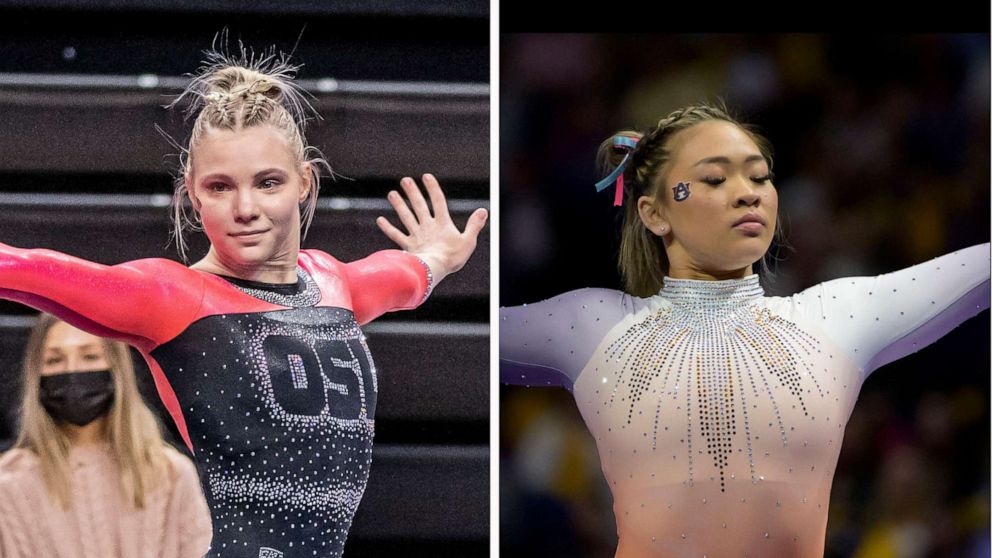 The accomplishment was first noted on Twitter by Nico Edgar, a sports reporter for the Daily Bruin, UCLA's campus newspaper, and quickly went viral.

Four Olympic team members competing at four different universities. All four received their first collegiate perfect 10 in one weekend and they are now flooding social media with support for one another. What a time to be a fan of gymnastics, I love it here 😭❤️

What a weekend for these ladies 👏🤩 #ThatsaW

Lee, Chiles and McCallum, along with Biles, took home a silver medal in the women's gymnastics team competition at the Tokyo Olympics.

Biles, who withdrew from the team final in Tokyo, took to Twitter to congratulate each of her teammates on their perfect 10s.

Lee, who won gold in the all-around competition and bronze in the uneven bars in Tokyo, scored a 10 on the uneven bars, prompting Biles to write on Twitter, "forever & always will be a bar queen," alongside a video of Lee celebrating her score.

After McCallum scored a perfect 10, also on the uneven bars, in a meet Friday, Biles wrote she was "so proud."

Biles called Chiles a "superstar" in a tweet celebrating the UCLA gymnast's perfect 10 for her floor routine.

Carey, who won gold in the women's individual floor exercise final in Tokyo, also received a congratulations tweet from Biles after scoring a 10 on the uneven bars Saturday.

Carey, a freshman, also earned the meet's highest scores on every single event, helping to lift Oregon State to victory over Arizona State, according to ESPN.