That’s was the first thought Melody Rezzonico of Wyoming had upon seeing her two-legged rescue dog, Gus, for the first time.

When she saw his photo, she immediately texted her mom, “I think this is gonna be my next dog!” 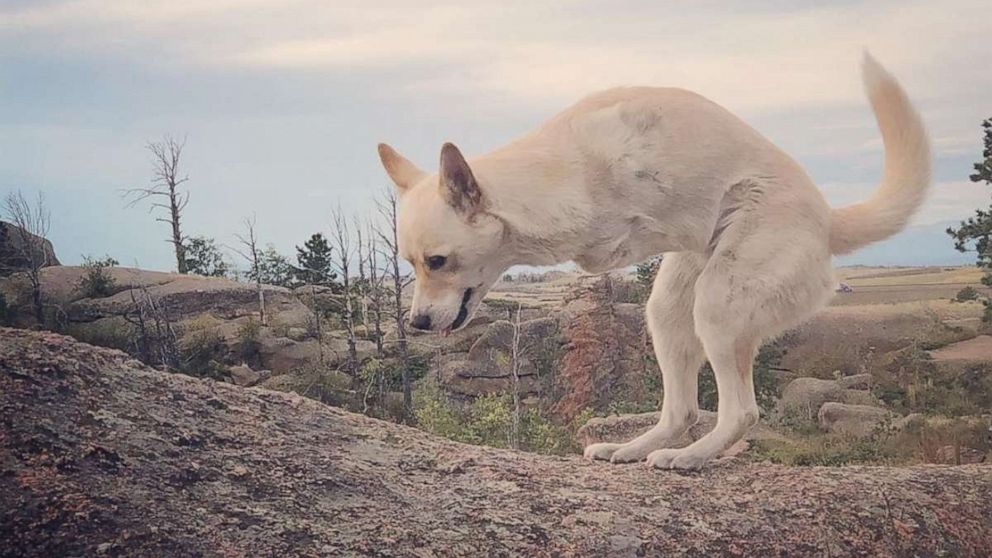 Melody Rezzonico
Gus was born with only two legs but he goes on adventures in all terrains thanks to his family and his prosthetics.
(MORE: This dog ran in her wheelchair for the 1st time and she can’t control her excitement)

Gus was abandoned in South Dakota when he was 4 months old and Rezzonico got connected to him through a local shelter.

“I just fell in love with his smile," Rezzonico told "GMA." "I couldn’t really tell the extent of his medical issues.” 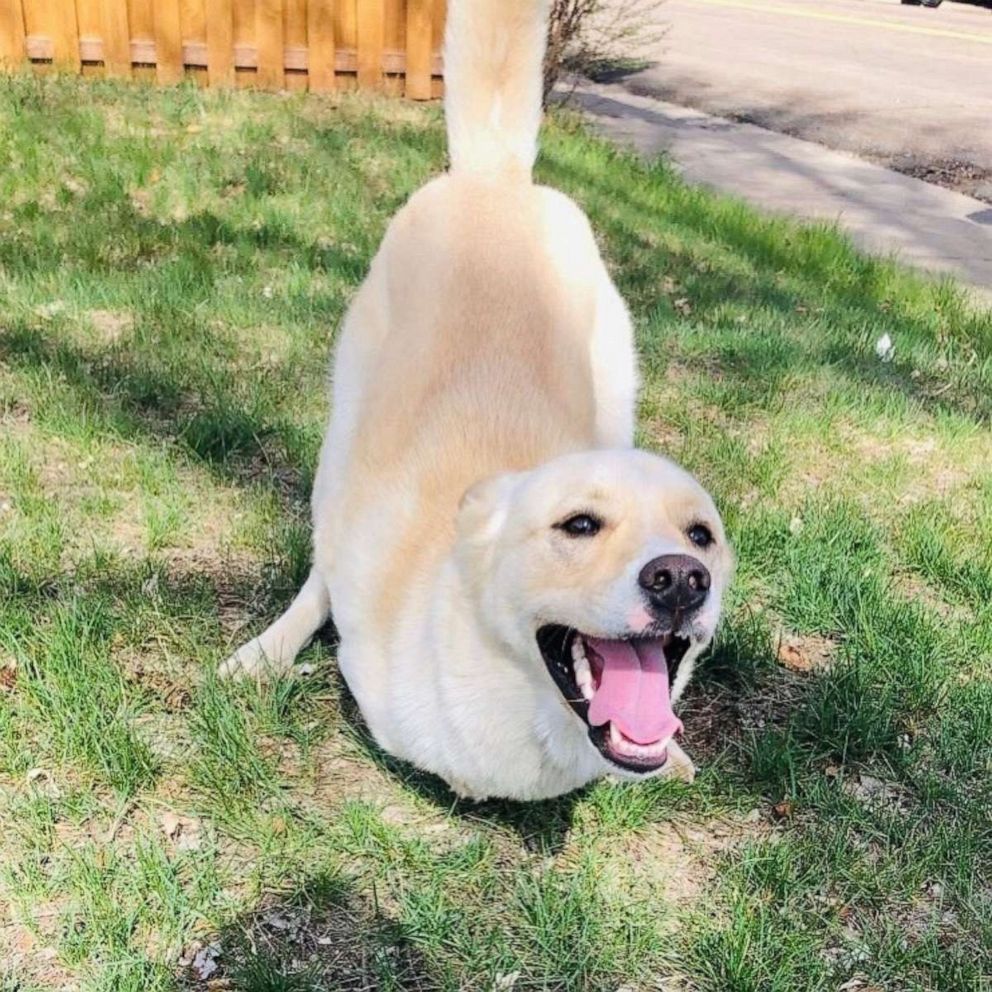 Melody Rezzonico
Gus was born with only two legs but he goes on adventures in all terrains thanks to his family and his prosthetics.

When she brought him home, she knew his mobility was limited and wanted to see how quickly they could get him a wheelchair.

“He could scoot around OK but he would fall and hit his chin," she said. "I knew he needed a wheelchair and prosthetic, as much as we could to help him.”

(MORE: This dog lost 100 pounds and has a new leash on life)
Editor's Picks

First came the wheelchair, which worked great on roads and rocky paths up mountains, but Rezzonico didn’t want to leave him behind even when they went snowshoeing or cross-country skiing.

So she drove Gus from Wyoming to Virgina to get to Bionic Pets, an animal prosthetics shop, to get him custom fitted for a body shell prosthetic. Since Gus doesn’t have limbs strong enough to support a traditional prosthetic, this was his best option. She was able to put the body shell on top a piece of plastic fashioned just like a snowboard.

And now Gus is a two-legged snowboarding pup. 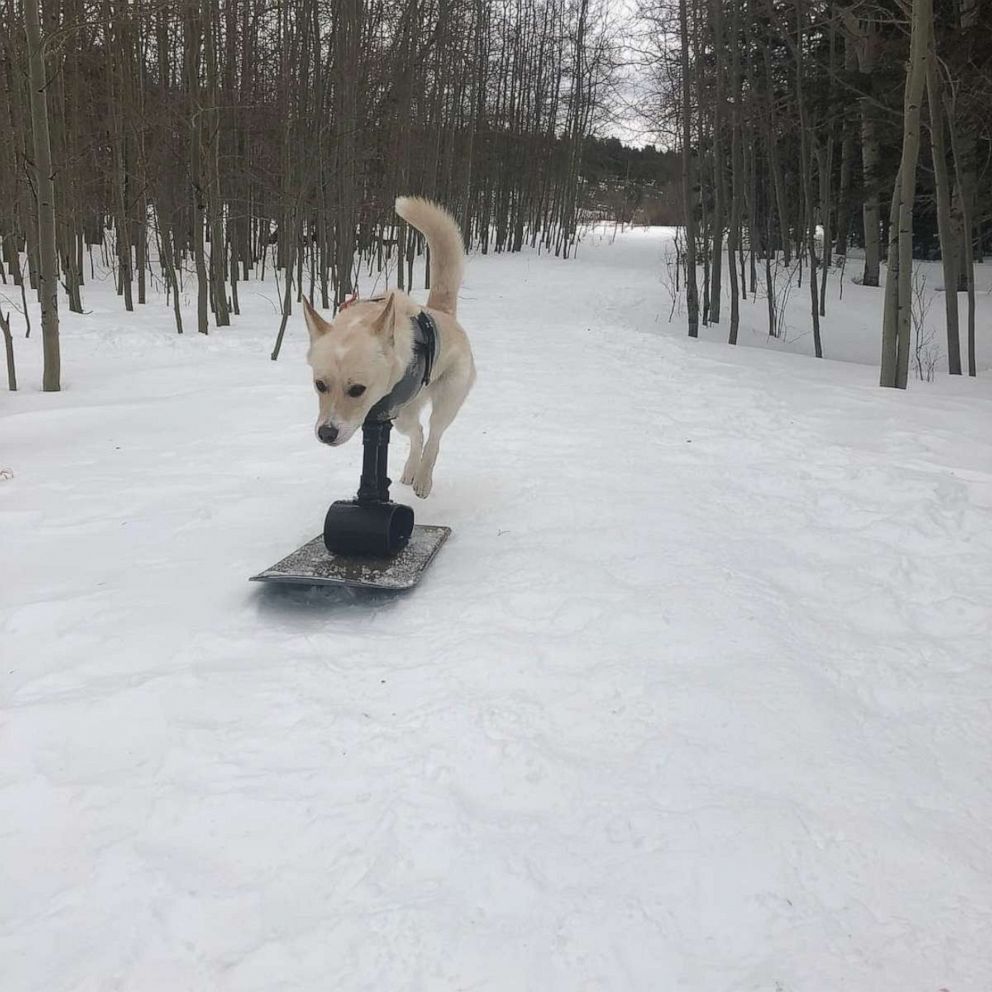 Melody Rezzonico
Gus was born with only two legs but he goes on adventures in all terrains thanks to his family and his prosthetics.
(MORE: These service dogs trained in prison help first responders and war veterans heal)

With his variety of prosthetics, Gus has gone up on a couple of 14,000-foot mountains, visited Moab, Utah, ran through sand dunes, and has gone backpacking, swimming and kayaking.

Most people stop and ask about his story when they see him wheeling or snowboarding outdoors. Rezzonico tells them, “Just because he’s a little different doesn’t mean he’s not worth fighting for.”

She says it’s a great reminder to never underestimate anyone because they’re different.

“I didn’t know what his level would be at when we adopted him," she said. "But he’s the most active dog I have, and I have a herding dog, so that says a lot about him.” 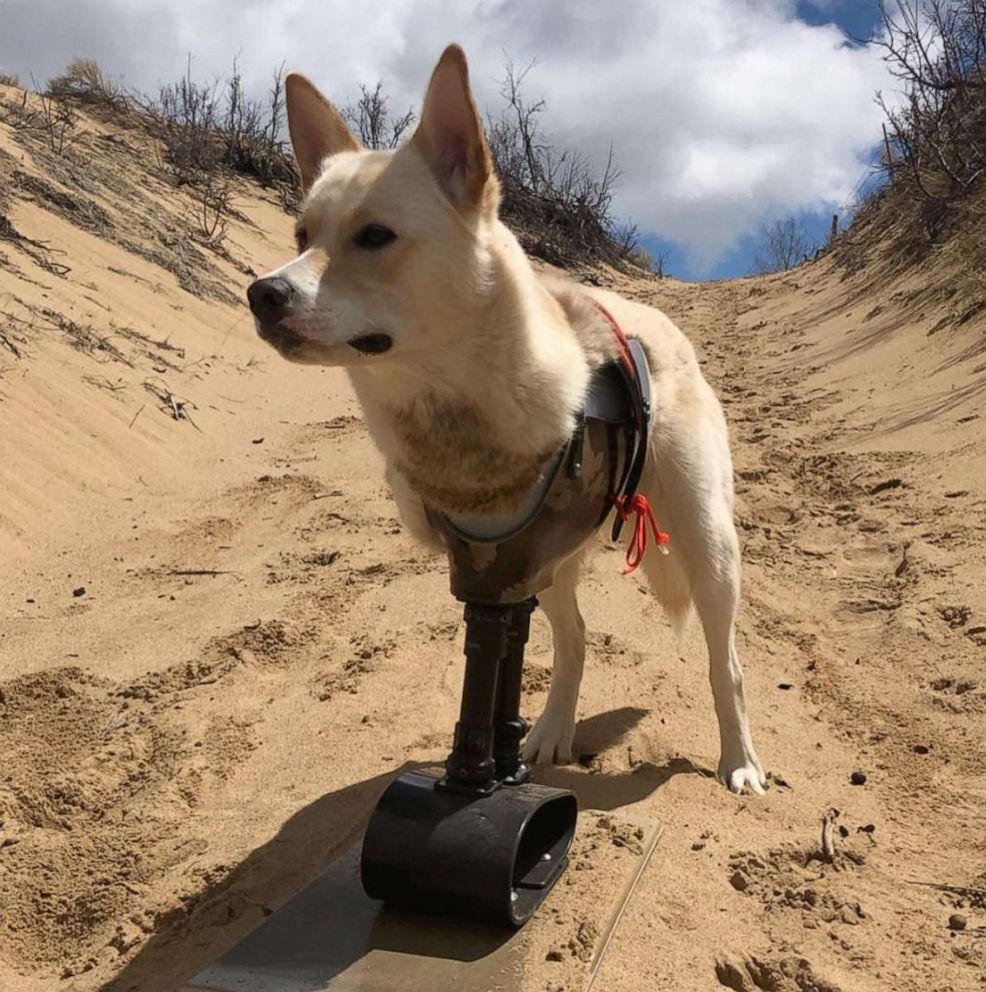 Melody Rezzonico
Gus was born with only two legs but he goes on adventures in all terrains thanks to his family and his prosthetics.