First lady Dr. Jill Biden is speaking out about two causes close to her heart: access to community colleges and breast cancer awareness.

Tuition-free community college was included in President Joe Biden's social-spending package, but it is now reportedly one of the latest big-ticket items to be dropped from the package.

When asked by Roberts what she would say to families who were hopeful about the prospect of free community college access, the first lady replied, "I would say we're not giving up. We are not giving up. This is round one. This is year one. I'm going to keep going."

Biden, the country's sole first lady to hold a job outside the White House, said she is also committed to another cause important to her -- making sure breast cancer screenings are accessible to all Americans. 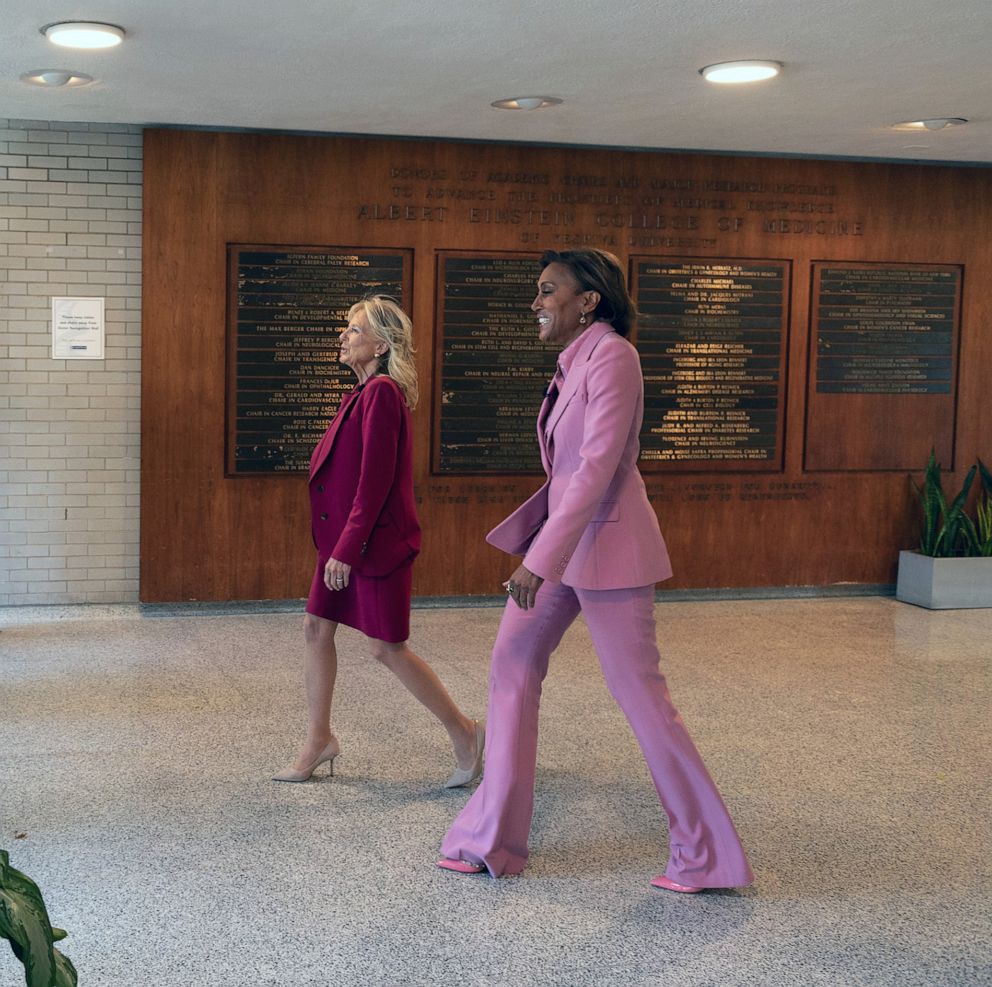 During the coronavirus pandemic, many doctors saw a drop in cancer screenings due to limited non-essential, in-person visits and patients opting to put off routine examinations -- including annual cancer screenings -- to curb risky face-to-face interactions.

The number of screening and mammograms given to people in the U.S. fell by as much as 80 percent during the pandemic, according to research published in July in the Journal of the National Cancer Institute.

Now, Biden is making it her mission to make sure people do not miss their screenings.

“We were afraid of the pandemic, afraid of the virus, but now I think that we’ve moved on a little bit and people are vaccinated," Biden said. "We have to make sure that we have to get the message out.”

Urging people to get mammograms, Biden continued, "The next thing you have to do today is call your doc and get in there and get your screenings. If you go get that mammogram and they catch it early, you have a fighting chance.”

Why breast cancer research matters to the first lady

“I had four friends who were diagnosed with breast cancer at the same time,” Biden said. “Unfortunately, we lost one of those friends, and I was so upset. I thought, what can I do? There has to be something. I thought, I know education inside and out, and so let's start to educate people."

Biden started to spread the message about breast cancer awareness in schools. 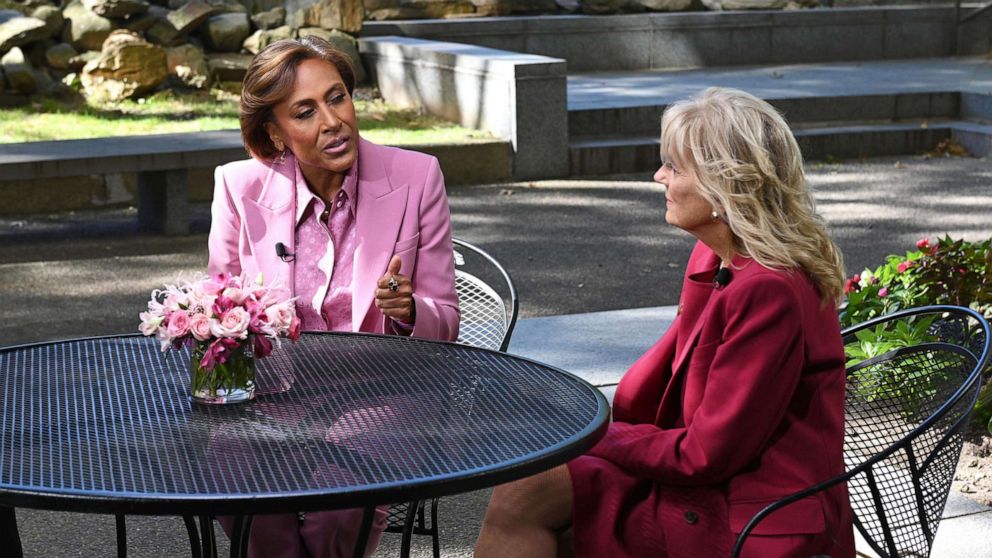 “I went into all the schools in Delaware and we taught them about early detection and breast health and the importance of good habits,” said Biden, whose husband served as a Democratic senator from Delaware for several decades. “Not only that, then they went home and sort of spread the word. When your kids say it, you do it, you know?”

Biden spoke to Roberts at the Montefiore Einstein Cancer Center in New York City, where doctors have also seen a drop in the number of people getting mammograms.

“We screen about 41,000 patients getting mammograms every year, and with the pandemic here, that dropped to almost 31,000, and that's disheartening," Dr. Amanda Rivera, an attending radiation oncology physician at Montefiore Einstein Cancer Center, told “GMA.” “We really just want people to get their cancer detected early so that we have more treatment options."

For 52-year-old Sandra Cruz, her hesitancy around the pandemic pushed back her annual mammogram. It wasn’t until this past April, after her doctor urged her to get screened, that she learned of her Stage 1 breast cancer diagnosis.

Like Biden, Cruz -- who does not need chemotherapy but will be starting radiation soon -- is urging other women to get screened early. 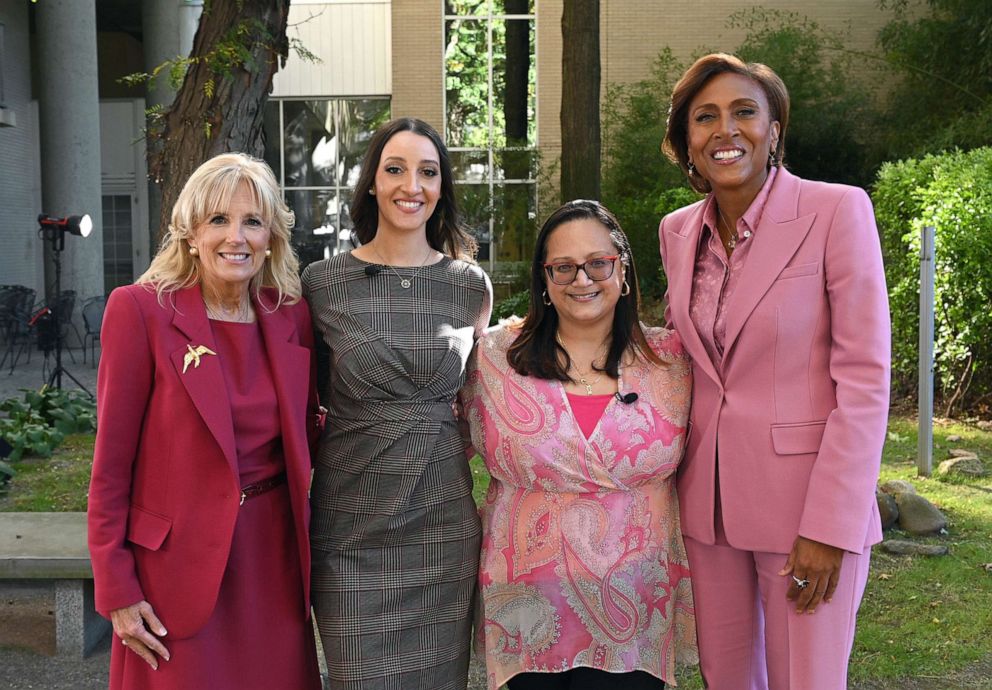 Biden noted she took time within the first month of moving to the White House earlier this year to get a mammogram.

"As soon as we got into office, there I was, off and getting my mammogram," she said. "There's nothing more important than your health. Nothing."

As first lady, Biden said she is also working to make sure the federal government makes it a priority to provide access to mammograms to all women.

“It’s the responsibility of the federal government to make sure that we have access, that all communities have access,” Biden said. “Whether that’s urban, whether that’s rural, so that’s one of the things that we plan to do.”

Medical centers like Montefiore are also working to make sure their efforts to increase screenings reach all people, including those who face barriers when it comes to health care.

“We know that in communities of color, in communities where there's less access to health care, we have barriers to overcome in terms of getting that population in for cancer screening,” Rivera said. “When you add a pandemic onto that, those disparities only grow further.”

Rivera said one of the ways Montefiore is reaching communities of color is through its clinical trials.

“As we learn through science, through research, we know that certain differences exist,” Rivera said. “Until we get more representation on those clinical trials, we’re not adequately assessing that patient population. So it’s very important to get more clinical trial enrollment from communities of color.”

According to federal guidelines, women ages 40 to 44 should have access to annual breast cancer screening with mammograms, while women ages 45 to 54 should get mammograms every year.

Starting at age 55, women should switch to mammograms every two years or continue annual screenings, according to the Centers for Disease Control and Prevention (CDC).