A record number of women and women of color were sworn into the 117th Congress on Sunday in Washington, D.C.

The new Congress includes 144 women, a total that surpasses the previous record of 127 women set in 2019, according to the Center for American Women and Politics (CAWP).

There are 106 Democratic women in the new Congress, tying the record set in 2019, and 38 Republican women, breaking the previous record of 30, set in 2006, according to CAWP.

Among the legislators, 52 are women of color, surpassing the previous record of 48, set in 2019.

Many of the women of color in the 117th Congress are history-makers in their own right.

Rep. Cori Bush, D-Mo., is the first Black woman to represent the state of Missouri in Congress.

Bush, a Black Lives Matter activist, shared a photo after her swearing-in Sunday of herself posing with the members of the so-called "Squad" -- Rep. Alexandria Ocasio-Cortez, D-N.Y., Rep. Ayanna Pressley, D-Mass., Rep. Ilhan Omar, D-Minn., and Rep. Rashida Tlaib, D-Mich., who are all also women of color serving in Congress.

Rep. Marilyn Strickland, D-Wash., made history as the first Black woman in Congress from Washington state and the first Korean American women elected to Congress.

Strickland, who represents Washington's 10th Congressional District, wore a hanbok -- a traditional outfit for important events in Korea -- during the swearing-in ceremony. 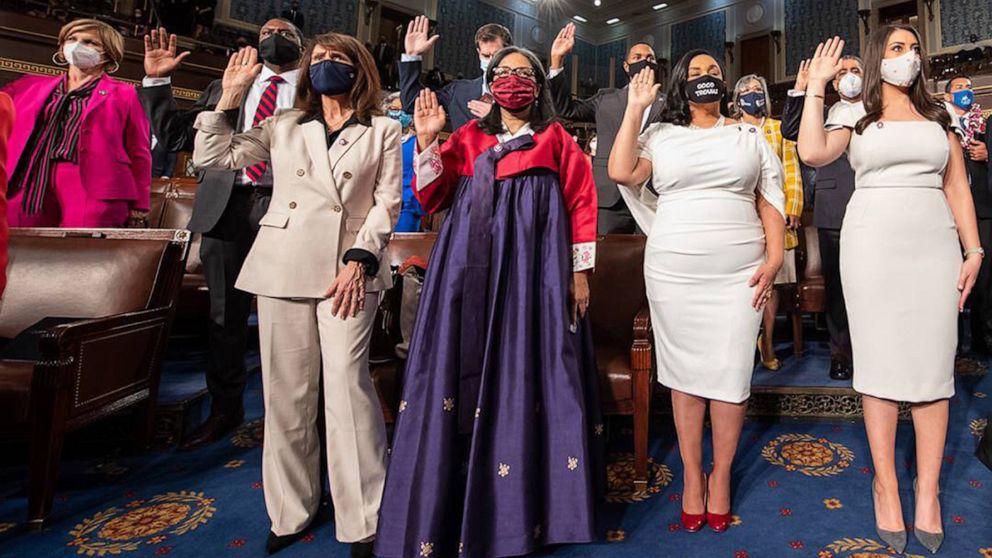 @RepStricklandWA via Instagram
Marilyn Strickland, center, wore a Hanbok to symbolize her Korean heritage at the swearing-in ceremony for new members of the U.S. House of Representatives in Washington, Jan. 3, 2021.

"As a woman of both Korean-American and African-American descent, it was deeply personal to wear my Hanbok, which not only symbolizes my heritage and honors my mother, but also serves as a larger testament to the crucial importance of diversity in our nation, state, and the People’s House," Strickland said in a statement, according to KHQ, a local news station in Spokane, Washington.

The number of women in Congress is expected to change due to still-pending results in some races and the selection of two women representatives, Rep. Marcia Fudge, D-Ohio, and Rep. Deb Haaland, D-N.M., to President-elect Joe Biden's Cabinet.

Vice President-elect Kamala Harris will also leave the Senate when she and Biden are sworn in Jan. 20. Her departure from Congress will leave Black women with no representation in the Senate.

Black women constitute only 4.9% of all members in Congress, even though they are nearly 8% of the U.S. population, according to CAWP.

Today marks the start of the 117th Congress, in which a record number of a women will serve in the House & Senate. As of today, women are:

Overall, even though a record number of women are serving in the 117th Congress, they still only make up nearly 27% of all members, CAWP reported.

In addition to the new members sworn into Congress, Rep. Nancy Pelosi, D-Calif., was elected to her fourth term as Speaker of the House in the 117th Congress.

As we are sworn in today, we accept a responsibility as daunting and demanding as any that previous generations of leadership have faced.

Our most urgent priority will continue to be defeating the coronavirus - and defeat it, we will! #117thCongress pic.twitter.com/HD5w1OUfx3

She is the first and only woman to ever have been elected Speaker of the U.S. House, according to CAWP.