A Minnesota father is celebrating a new chance at life thanks to his daughter, who donated part of her liver to save his.

"Now I can take all of Molly’s positive traits because they’re in me," said Mike Maudal, of Carlos, Minnesota, referring to his daughter, Molly Maudal. "I certainly have a tremendous appreciation for Molly."

Mike Maudal, 62, was preparing to retire from his job as a loan officer nearly six years ago when he went to his doctor for a routine checkup before his medical benefits ran out.

The doctor noticed something unusual in his blood work and sent him to the Mayo Clinic in Rochester, Minnesota, about four hours from the family's home.

It was at the Mayo Clinic that Mike Maudal was diagnosed with non-alcoholic steatohepatitis (NASH), an aggressive form of fatty liver disease, which can progress to cirrhosis and liver failure, according to the Mayo Clinic.

Mike Maudal said he was "very surprised" by the diagnosis, which doctors initially treated with diet changes and medication.

He was even more surprised when two years later, in 2018, doctors told him he would ultimately need a liver transplant.

"I pretty much went into denial. I really didn’t think I was that sick or that I’d need a transplant," said Mike Maudal. "I thought I was going to beat the odds." 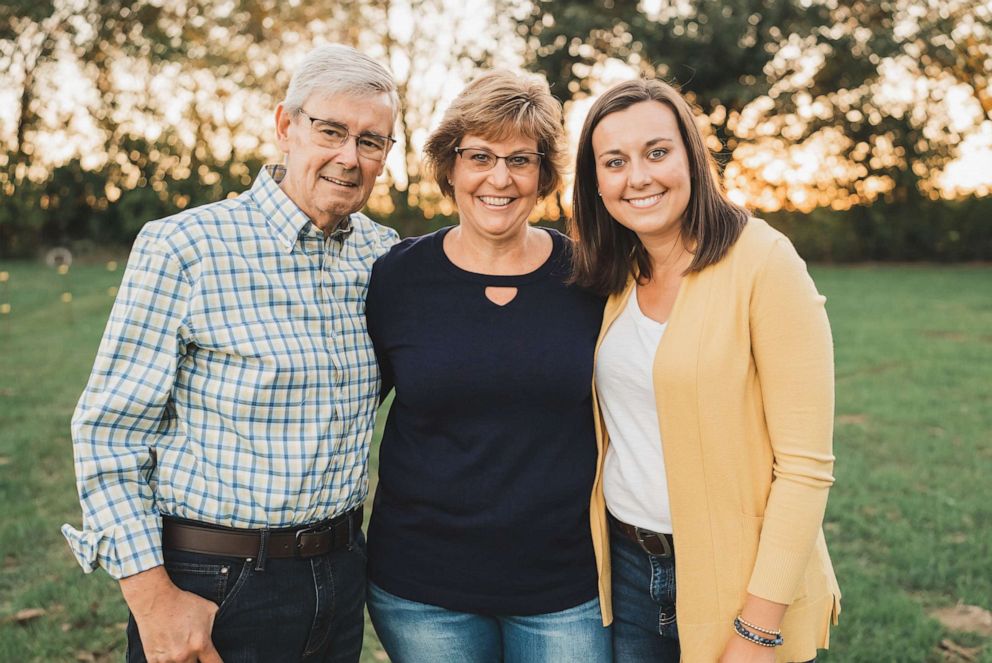 At home, Molly Maudal, 23, and her mother, Cindy Maudal, watched as their dad and husband, respectively, began to quickly decline both physically and mentally.

"It was really hard. He just got sicker and weaker and was struggling with everyday tasks," said Cindy Maudal. "And then the fear of what does this mean every time he had some new issue develop ... and the [fear of] what if he didn’t make it, what would life be like? What would that be like for me and Molly? And then trying to hold down the house at home, trying to work full-time, take care of his medications, it was stressful."

Molly Maudal, an only child, said she struggled most with seeing her father's mental decline, which occurs in people with NASH because the liver is unable to remove toxins from the blood.

"When I was growing up, he was so sharp and to see him lose that to the disease was really hard," she said. "He was always really jovial and would joke around and people loved him for his humor. It was like his personality changed."

Mike Maudal was placed on the liver transplant waiting list but doctors, and his family, worried that he would not be strong enough physically to undergo a transplant by the time he was eligible for a liver from a deceased donor.

The Maudals then began to consider a living-donor liver transplant, in which a portion of the liver from a healthy, living person is removed and placed into someone in need of a working liver, according to the Mayo Clinic.

A living donor is able to donate just a part of their liver because the remaining liver regrows to its normal size and capacity within a few months, and the donated portion of the liver also grows and restores normal liver function in the recipient.

"It’s amazing the amount of people who have told us, ‘Oh, I thought I could only donate when I was deceased. I didn’t know I could do this when I was alive,'" said Mike Maudal. "It was news to us too when we started down this path years ago."

When Cindy Maudal did not qualify as a donor for her husband, the family quietly began to ask loved ones and close friends about the possibility of donating, but fell short of finding a match.

The Maudals all also knew that Molly Maudal, with the same blood type as her dad, could possibly match as a donor, but neither of her parents wanted to put that pressure on her.

"Molly was in college and we wanted her to finish her education," said Cindy Maudal. "She was young and as a parent, you don’t want to ask for something like that."

Molly Maudal though said she had been preparing to step up if she was needed, explaining, "In the back of my mind, for several years through it all, I was thinking about being a donor and in several ways wanted to arrange my life so that just in case he needed an emergency transplant, I could be there." 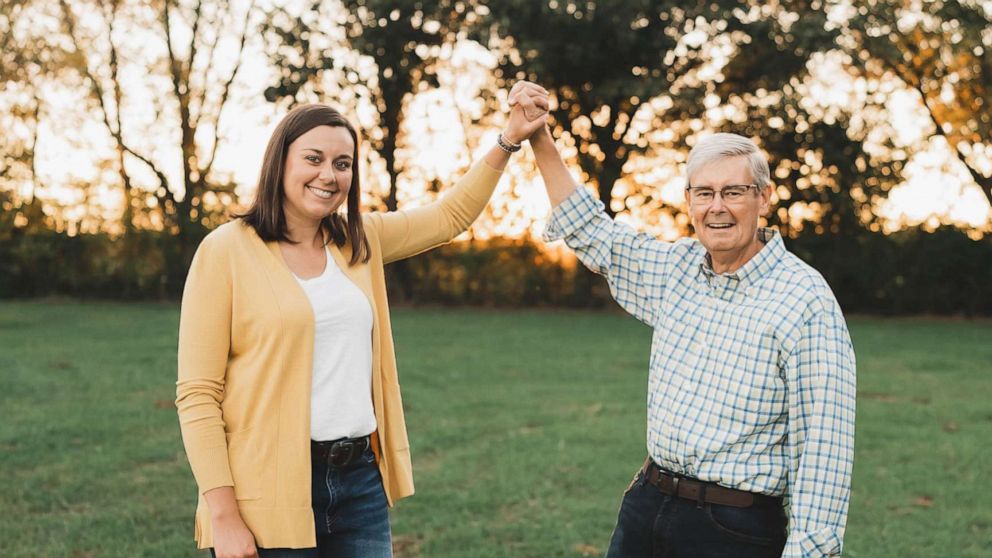 That moment came in late 2020, when doctors at Mayo Clinic told Mike Maudal that his only chance at surviving liver disease was to find a living donor.

"It hit home in a whole new way hearing that," said Molly Maudal. "My mom knew I had been thinking about [donating] and she said, ‘Hey Mol, if you’re thinking about this, now is probably a good time to get tested.’ I was totally in agreement."

Molly Maudal then began the process of being evaluated as a potential donor for her dad, undergoing bloodwork and physical exams and meeting with doctors as well as a psychiatrist and social worker.

She learned she was eligible to save her dad's life during a phone call with the Mayo Clinic nurse at the end of April.

"It was such a relief to know that we had a match and the wait and the uncertainty of finding a donor was over, just to know that he had a chance now," she said. "I just had this sense of calm about my decision to move forward. It just felt right." 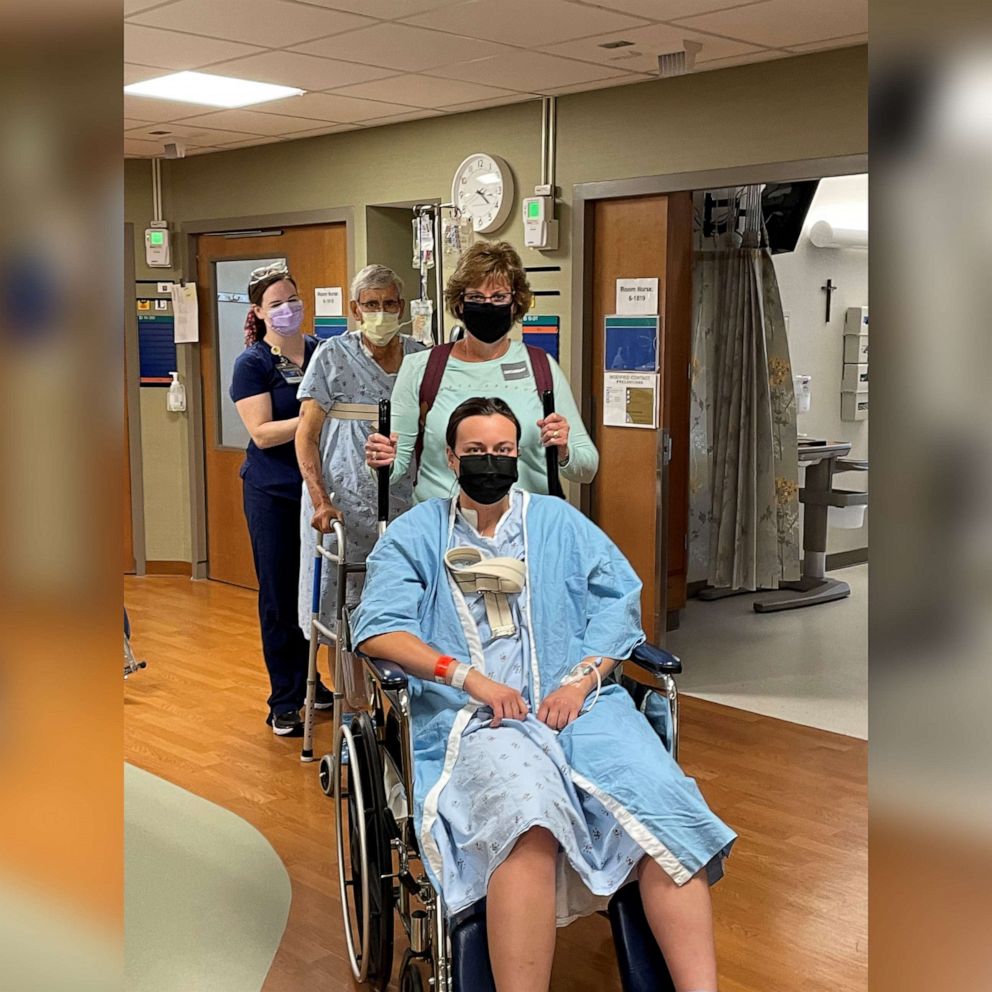 "I’ve been taking care of Mr. Maudal for several years before transplant and every time I saw him, he was doing worse, so I was very worried about him," said Heimbach. "He’s an amazing guy and I’m just so happy it worked out."

"That we can take one side of a healthy person’s liver and give it to somebody else who is really struggling and have them both leave doing great is unbelievable," she said of living-donor procedure.

The Maudals recovered in hospital rooms near each other and were discharged within one day of each other, Molly on June 17 and Mike on June 18. 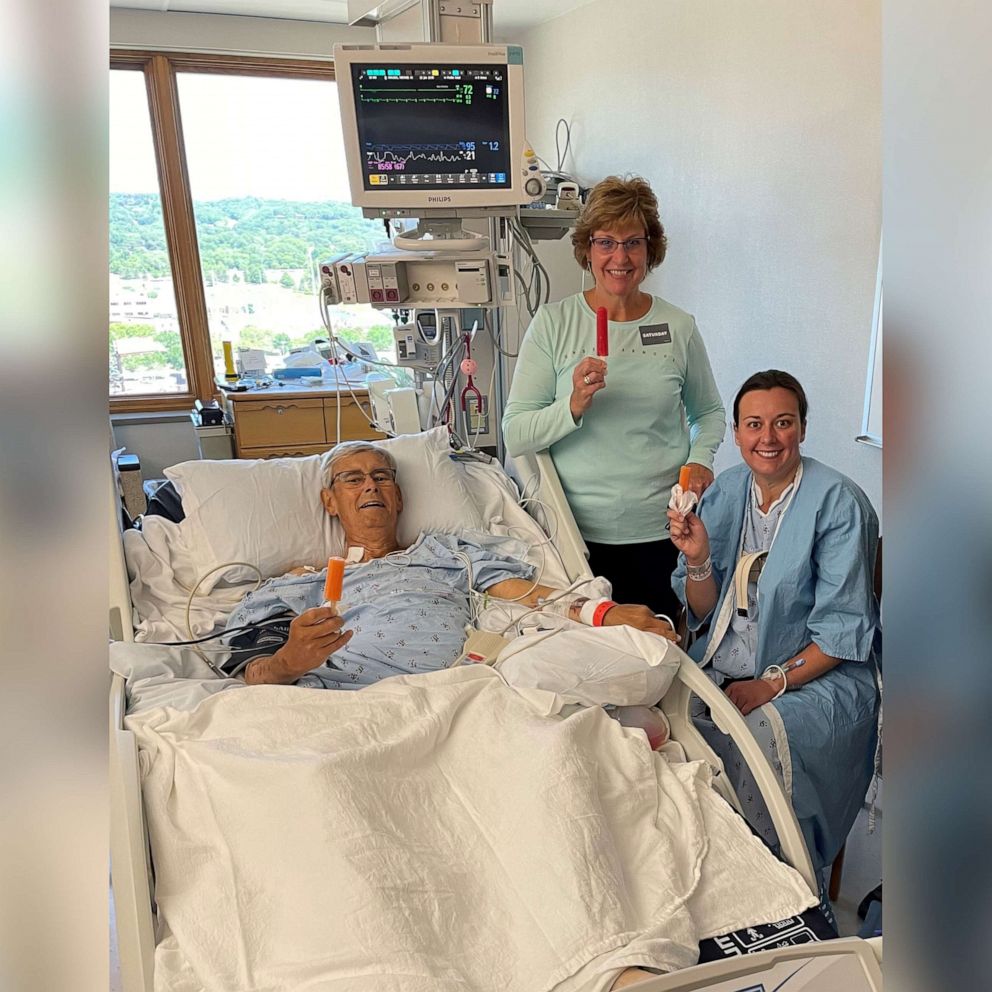 Courtesy Molly Maudal
Molly Maudal eats a popsicle alongside her parents Mike and Cindy Maudal after donating part of her liver to her father.

"I remember Dr. Heimbach and another surgeon came up and told me, ‘Your liver was perfect for your dad.’ That was a fantastic feeling," said Molly Maudal. "And I remember visiting dad in his room and we could visibly see him improving. His eyes weren’t as sunken and his color was improving. His sense of humor and personality came back so fast. It was amazing to see firsthand."

The Maudals, who are both recovering well and returning to their normal daily activities, including work as an occupational therapist for Molly, say they want to share their story to encourage more people to become living liver donors.

The need for living liver donors is great because the demand so far overwhelms the number of livers available from deceased donors.

Of the 8,000 liver transplants performed in the United States in 2017, only about 360 involved living donors. But more than 11,000 people were registered on the waiting list for a liver transplant, according to the Mayo Clinic.

In addition, living-donor liver transplants can help save the lives of children, for whom suitable deceased-donor organs can be hard to find. 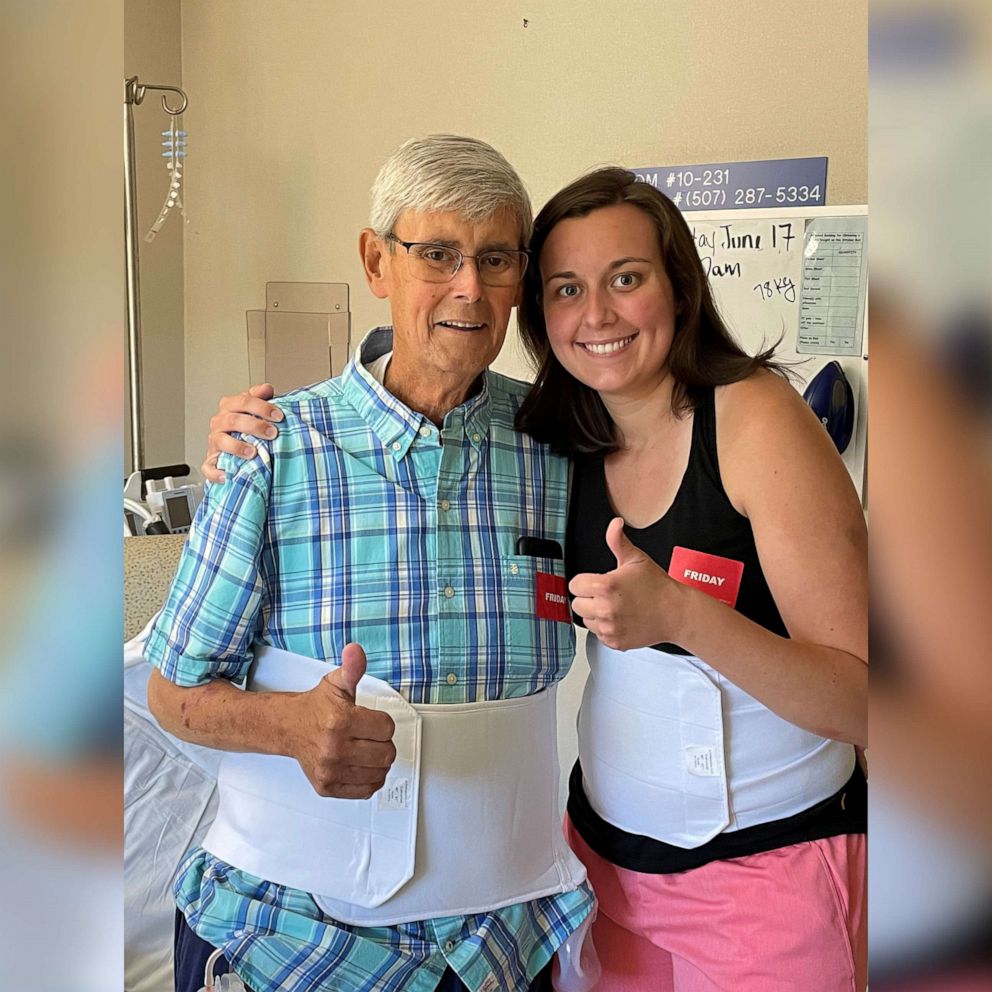 In order to be a living liver donor, a person typically needs to just have a matching blood type and meet the health requirements for a transplant, according to Heimbach.

"The liver is more forgiving from an immunology standpoint," she said. "With a kidney, we are looking at a match pretty closely but with a liver, we’re just looking at having a compatible blood type."

Cindy Maudal, who watched her two closest family members undergo surgery at the same time, said the family feels likes "one of the lucky ones" in finding a living liver donor. 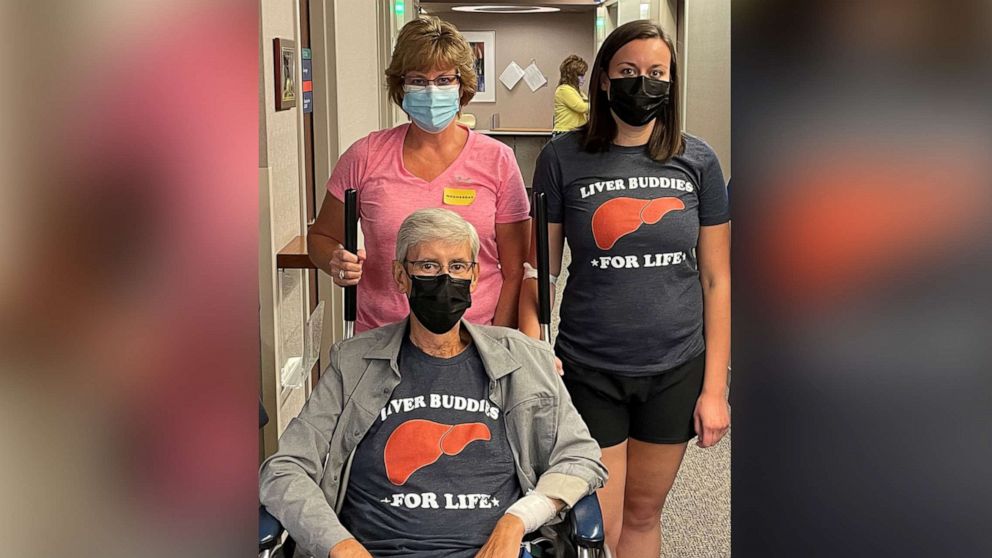 Courtesy Molly Maudal
Molly Maudal, right, donated part of her liver to her dad, Mike Maudal, who is pushed in a wheelchair by his wife, Cindy Maudal.

"I’m not sure Mike would still be here if Molly hadn’t been a match to be a donor for her dad," she said. "I’m so grateful that the two people I love the most are still with me."

It was also not lost on the family that June 11, the day their transplant took place, was the same day 24 years ago that Cindy and Mike Maudal found out they were pregnant with their only child.

"That's the day we found out we were giving Molly life, and it ended up being the same day years later that she gave her dad new life," said Cindy Maudal.