By Dr. Esra Demirel
Share —
Sign up for our newsletters to get GMA delivered to your inbox every morning!

Stephanie Schmidt, a 30-year-old neonatal intensive care unit nurse in New York, was 8-weeks pregnant when she walked through the doors of her OBGYN for a routine visit to establish prenatal care.

What started as a routine visit for Schmidt ended with her doctor finding a breast lump on her physical exam. A subsequent biopsy of the mass revealed the news she least expected from a prenatal visit: She had breast cancer.

"It wasn't even a thought that I could get cancer right now," Schmidt, who has no family history of cancer or predisposing genetic mutations, told ABC News. "I had just stopped breastfeeding my first son a month before that. I didn't feel anything, surprisingly. It was a shock."

The months that followed Schmidt's diagnosis were filled with many hard decisions and uncertainty.

"We just didn't know anything about what would happen," said Schmidt, also mom to a 2-year-old son. "I had never heard of someone having cancer while pregnant."

Breast cancer is the most common cancer in women in the U.S. and occurs in 1 in 8 women during their lifetime, according to the Centers for Disease Control and Prevention.

Breast cancer in pregnancy is more rare and occurs in about 1 in 3,000 pregnancies, according to the National Cancer Institute.

After seeking multiple opinions from different doctors, Schmidt decided to continue her pregnancy and pursue cancer treatments while pregnant. She was diagnosed with breast cancer in September, 2020 and started chemotherapy in November.

"My doctors knew the importance of keeping the pregnancy for me," said Schmidt. "They tailored my whole treatment pretty much around trying to balance me and the health of the baby." 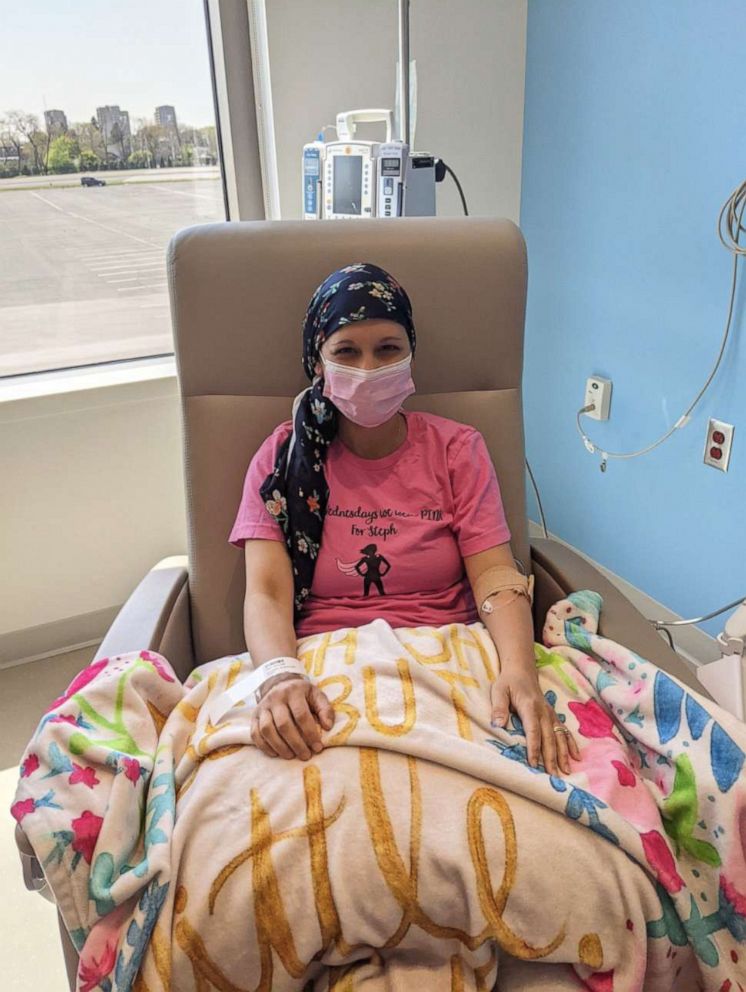 Although breast cancer in pregnancy is rare and treatment choices can be complicated, safe treatments are available for those who wish to continue their pregnancies, according to experts.

"Pregnant women can be safely treated for breast cancer with several modifications to protect the fetus," Dr. Devika Gajria, medical oncologist at Memorial Sloan Kettering Cancer Center, who treated Schmidt during her pregnancy, told ABC News. "Breast cancer outcomes for pregnant patients mirror those of non-pregnant patients both in terms of risk of recurrent disease and overall survival."

Editor's Picks
MORE: First lady Dr. Jill Biden speaks out on her mission to get people screened for breast cancer

"Chemo was like a nightmare that I never want to relive," said Schmidt. "I just felt so sick for so long. Being on chemo during the pregnancy was horrible."

However, even with the tailored chemotherapy treatments, Schmidt's tumor did not shrink.

Schmidt's doctors recommended that she undergo an induction of labor at 35 weeks, a decision she said was one of the hardest of her cancer journey. As a NICU nurse, Schmidt said she knew that giving birth preterm came with risks.

"We were balancing the fact that my cancer was most likely growing and I needed to get to the next stage of chemo and treatment as soon as possible," said Schmidt. "The fact that he was premature weighed on me a little bit, but the fact that the cancer didn't spread while I was pregnant made me feel like I had to do that for him, for him to have a mom."

After a successful induction of labor, Schmidt gave birth to a healthy baby boy, Wesley, on March 12, 2021, in the same hospital where she works as a NICU nurse. 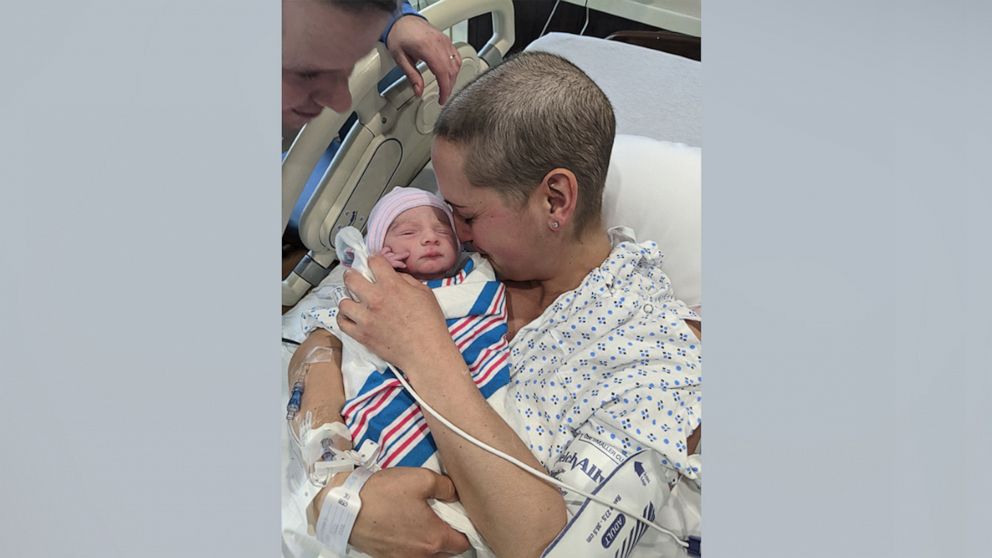 "After I delivered, they could really hit me with all they got," said Schmidt, who underwent 12-weeks of additional chemotherapy and immunotherapy treatments that she could not receive while pregnant.

Three months after giving birth, in June, Schmidt underwent a left mastectomy. For the first six weeks of her recovery, she could not lift anything above five pounds, including her infant son, which she said was emotionally one of the hardest parts of her recovery.

"I definitely had some postpartum depression," Schmidt said. "My husband was a huge support. My parents were here all the time. My coworkers did so much for me."

After a long and emotionally difficult battle, Schmidt received her last chemotherapy treatment in February, just a few weeks before her son's first birthday in March.

Looking back at her journey, Schmidt considers her pregnancy her savior. 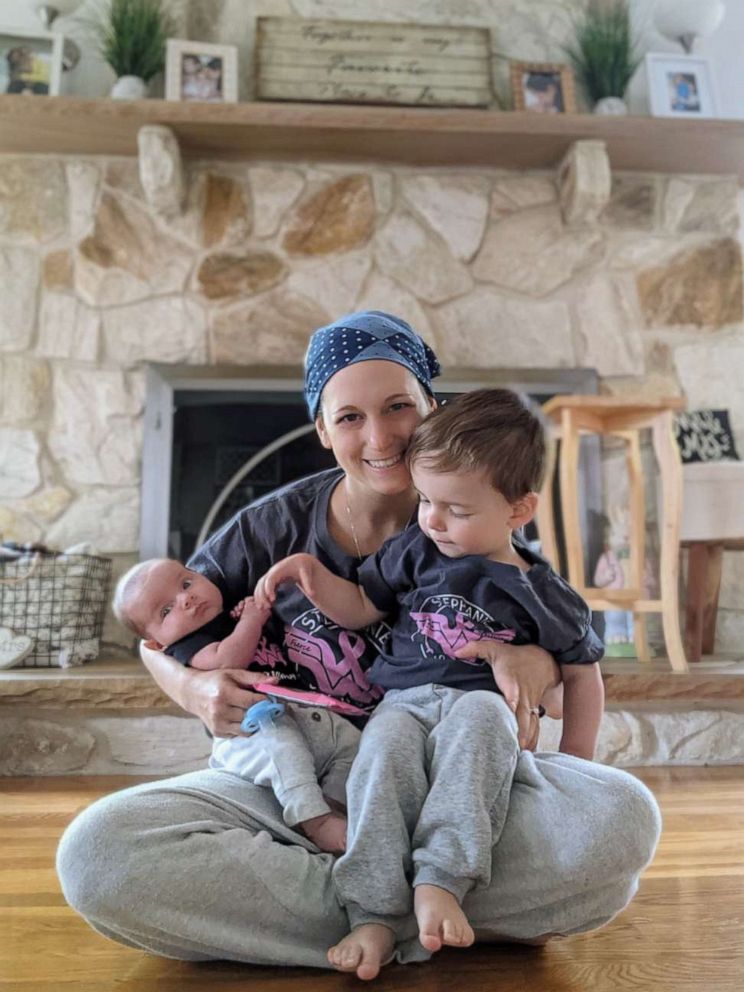 "If I didn't get pregnant and if Dr. Nanda didn't find this tumor, I don't know when we would have found this cancer and what stage it would have been," said Schmidt, referring to Dr. Deepak Nanda, a maternal-fetal medicine specialist at Long Island Jewish Medical Center, who discovered Schmidt's tumor during her first prenatal visit and followed her during her pregnancy.

According to Nanda, the prenatal visit is an important time for women to get a thorough check of their health, including a breast examination.

"It's important to thoroughly examine a patient and get a completely good history in an initial prenatal visit, because subsequent visits are limited," he said. "The first visit should include a breast examination, pelvic examination and a good screening questionnaire that will identify any potential problems."

"Many women do not see a primary care doctor and their OBGYNs are their primary care," Nanda added, underscoring that for many women, their annual OBGYN visits or prenatal visits may be the only opportunity for routine health screenings.

For women who may find themselves facing a health crisis such as cancer, Schmidt said her advice to them is to, "Find a doctor that really listens to them and listens to their concerns and wishes and what they really want."

Esra Demirel, M.D., an OB-GYN resident physician at Northwell Health, is a contributor to the ABC News Medical Unit.