Stacy Blair said she had an "aha" moment two years ago that motivated her to change her life, and ultimately lose more than 200 pounds.

"One morning I was getting ready for a work function and looked in the mirror and was devastated by what I saw," Blair, 30, told "Good Morning America." "My health was getting progressively worse, and it was getting painful just to move and stand."

Blair, who lives near Minneapolis, said she still remembers that day, Sept. 14, 2017. She also remembers her weight: 352 pounds. 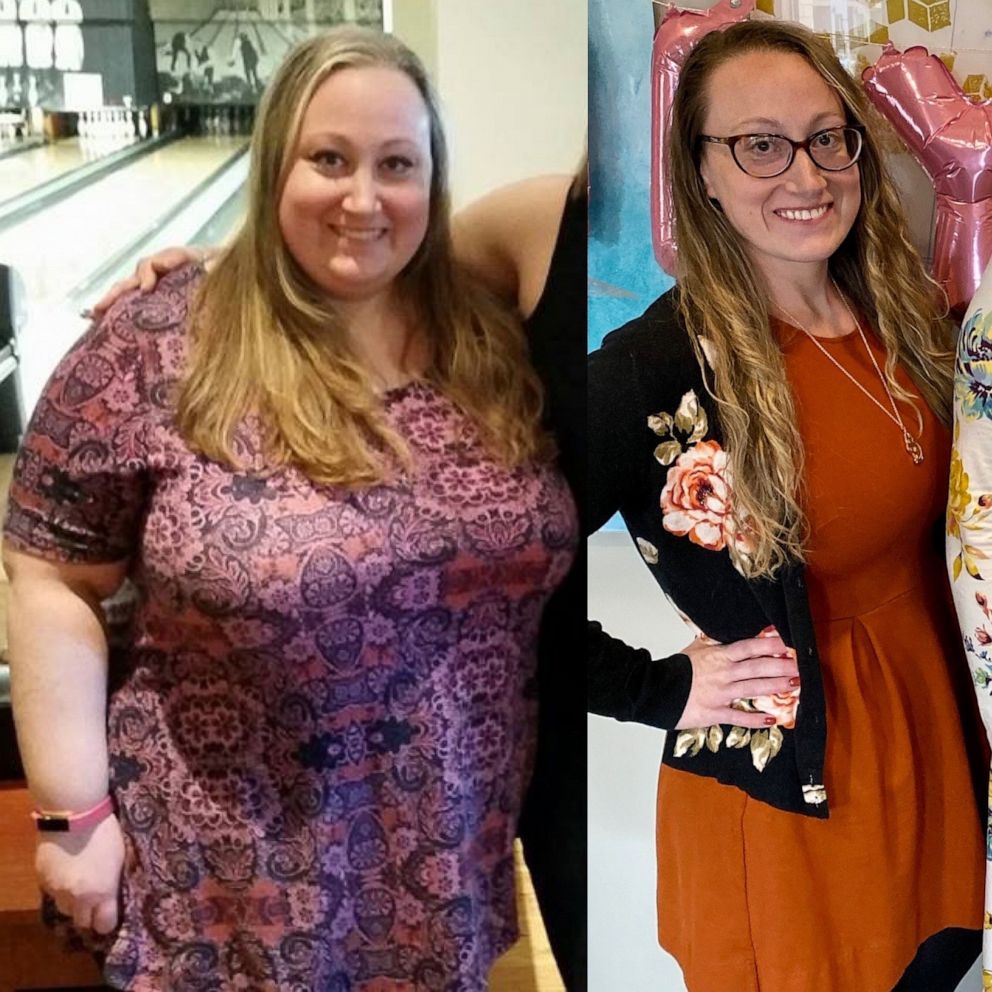 "Everything is different," she said. "The biggest thing that I love is not having to think about my size before I do something."

"I hadn't flown since 2014 because I was afraid I wouldn't fit in an airplane seat. I love the outdoors and couldn't hike or do anything because it physically hurt," Blair added. "I like to say that now I'm able to live, versus before I was existing."

Blair has shared her weight loss journey on Instagram and created a community of nearly 80,000 followers who share motivation, tips and inspiration.

"It's so overwhelming to me to think I would be an inspiration to people. I'm just a regular gal," she said. "I like to remind people to not give up."

"You can always take your health back," Blair added. "You just have to be patient with yourself and never give up."

Here are the five tips Blair credits with helping her lose more than 200 pounds completely on her own.

Blair said she had lost weight previously in her life but would always gain the weight back, and then some.

What stuck for her with this weight loss was that she was doing it for her own health, not to look good for other people.

"I wanted to get healthy, be active with my little brothers and one day have kids," she said. "Those motivations were stronger than any of my excuses at that point."

"That was the biggest piece for me finding my why, why I wanted to lose weight," she said. "I had to find the reason why it was impacting my life and my health was that, so health was always my goal."

Blair started her weight loss journey in September 2017 simply by using an app to track her calories.

"I focused on calories alone just to get an idea of what I was putting in my body and what the right portion sizes were," she said.

The next thing Blair did early on was meal prep on the weekends so she would have food on hand to eat all week.

"Previously I ate a lot of fast food, easy grab-and-go unhealthy things -- pizza, chips, anything you don't really have to prepare essentially," she said. "That was why meal prepping was such a big important part of my journey."

Blair typically preps two different recipes each weekend -- like salmon and chicken -- that she eats for lunch and dinner all week, with sides like fresh vegetables.

She also made it a family affair, going to her parents' house some weekends to meal prep with her mom.

A few months into her weight loss, Blair started following the ketogenic diet, a very low-carbohydrate way of eating designed to get your body into a state called ketosis, in which your body is so low on carbohydrates it starts burning fat for fuel.

"I'd been researching keto for probably a good year and had been too scared to start it but finally decided to dive in," said Blair, who also at this time began tracking her macronutrients -- carbs, fats, proteins -- via an app.

Blair said eating keto made her feel satisfied instead of deprived, a key part of her weight loss success. She focused on eating high-protein meats and vegetables.

"Keto just happened to work for me," she said. "I stress that to people that anything works because it's about the calories, so you have to find what you can stick to long-term."

5. Focusing on diet over exercise

Blair emphasized that the majority of her weight loss has been through good food choices and not exercise.

She followed through with her plan to lose 50 pounds before exercising, but then she injured her knee while exercising and had to stop.

The only type of exercises she has focused on since are the outdoor activities like biking and hiking that she loves but was not able to do before her weight loss.

"I get to do what I love," Blair said, "and not be held back by my weight or my health or the thoughts about either one of those things."