Well before the Supreme Court ruled in June to overturn Roe v. Wade, 9% of abortions in the U.S. were obtained by people who had to travel out of state, according to data released Thursday by the Guttmacher Institute, a policy organization that supports abortion rights.

That number -- nearly 1 in 10 abortions in the U.S. -- is up from 6% in 2011, an increase that occurred at the same time as more states passed abortion restrictions, according to the Guttmacher Institute.

Now, with the power to decide abortion access returned to the states by the Supreme Court, abortion rights advocates say the number of women forced to travel for abortion care is already growing.

In all of 2021, the fund helped 34 people travel, according to Carlson.

"It has skyrocketed our spending," Carlson told ABC News of the Supreme Court's decision, adding that the Colorado-based fund spent $20,000 on support for people seeking abortion care in the first 10 days after the ruling. "We're seeing numbers that we've never seen before." 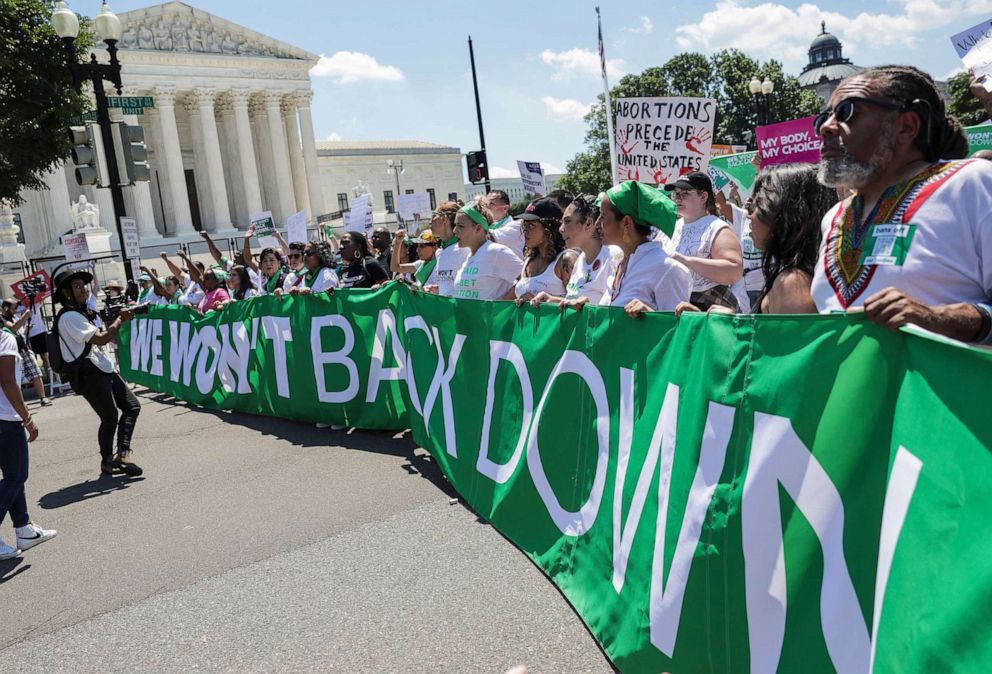 Kevin Dietsch/Getty Images, FILE
Abortion rights activists protest outside the U.S. Supreme Court on the last day of their term on June 30, 2022, in Washington, D.C.

The right to abortion is protected in Colorado. In April, Democratic Gov. Jared Polis signed a bill that codified the right to abortion and declared that a "fertilized egg, embryo, or fetus does not have independent or derivative rights under the laws of the state."

Earlier this month, Polis signed an executive order that added more protections for abortion providers and individuals who travel to Colorado for abortion care.

The states surrounding Colorado -- including Texas, Oklahoma, Wyoming, Utah and Arizona -- have mostly strengthened their restrictions on abortion access, in some cases implementing near-total bans, in the weeks since the Supreme Court's June 24 decision.

In Oklahoma alone, one abortion clinic, Trust Women Clinic in Oklahoma City, was seeing around 300 patients per month before Roe v. Wade was overturned, according to clinic director Kailey Voellinger.

If the amendment is approved, further restrictions on abortion access are expected, according to FiveThirtyEight.

Carlson said that, over the last month, The Cobalt Abortion Fund had helped women from as far as Florida and as close as Texas get abortion care in Colorado. The fund, she said, is spending between $1,000 and $2,000 on average in travel assistance per person.

"People are struggling economically and they're facing not only the cost of abortion care but also very expensive plane tickets, very expensive gas," she said. "They need flights purchased for them. They need transportation to and from the airport. They may need a hotel while they're here."

With so many out-of-state people seeking abortion care in Colorado, wait times for appointments are now as long as one month at some clinics, according to Carlson.

Adrienne Mansanares, CEO of Planned Parenthood of the Rocky Mountains, told ABC News that her organization purposely placed one of its centers along a Colorado highway knowing that people would travel to the state, given its abortion protections.

"People who were in my position before me 20 years ago were preparing for their worst nightmare, which is this," said Mansaneres, referring to Roe v. Wade being overturned. "We built a beautiful health center that's right along the highway [by] Denver International Airport with this idea in mind. If people ever had to fly, patients can come in and out so we can see them in our health center." 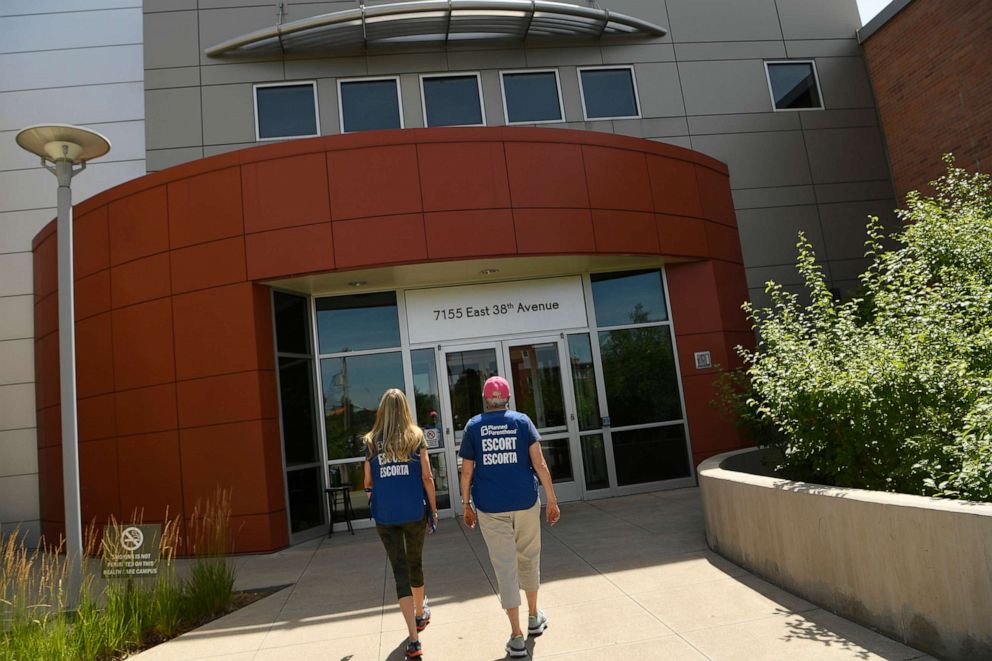 Denver Post via Getty Images, FILE
In this July 18, 2019, file photo, volunteer escorts wait to assist incoming patients outside of the Planned Parenthood in Denver, Colorado.

"When people don't want to be forced to have a child, they will go through the means necessary that they have access to," said Mansares. "So if they have money to hop on a plane, if they have connections and family in another state, they have the information that they need, they're going to go find it, so we have seen the migration of people coming from these states."

After the fall of Roe, more than half of patients who come to Planned Parenthood of the Rocky Mountains' regional clinics in Colorado, New Mexico and Nevada for abortion care have been from out of state, according to a spokesperson.

In New Mexico, a state where abortion access is also protected, demand for abortion care has spiked since the Supreme Court's decision, according to Joan Lamunyon Sanford, executive director of the New Mexico Religious Coalition for Reproductive Choice, a faith-based advocacy group and abortion fund.

"We're seeing people contact us from all over the country, not just states that are bordering New Mexico, and we're seeing people in all stages of pregnancy contact us," Lamunyon Sanford told ABC News. "People are confused about whether it's safe for them to travel from other states to New Mexico, and at the same time they're determined to get the care that they need."

"We're doing the best we can to meet all of those needs," she said, adding that the fund is working to hire more people to meet the demand.

Abortion clinics in New Mexico that were overwhelmed prior to Roe's reversal -- due to an influx of patients from Texas, which for the past year had a near total ban on abortions after six weeks -- are now experiencing wait times of several weeks, according to Lamunyon Sanford.

"We know that just from Senate Bill 8 in Texas, that our numbers increased between three and four times," she said. "And our numbers have increased beyond that in the last four weeks."

In response to abortion restrictions in Texas post-Roe, Whole Woman's Health, an Austin-based network of abortion clinics, has announced it is closing its four Texas clinics and reopening in New Mexico, where they hope to open a location near the border with Texas as early as August.

"We are hoping that by setting up in New Mexico, we can help the people in Texas who have been displaced," said Amy Hagstrom Miller, president and CEO of Whole Woman's Health and Whole Woman's Health Alliance, which also operates abortion clinics in Minnesota, Virginia, Indiana and Maryland. "We know thousands of people have already been forced out of Texas for abortion since last September, and they were able to go to Louisiana and Arkansas and Oklahoma ... and now those states have also banned abortion."

Hagstrom Miller said that 30% of patients at Whole Woman's Health's clinic in Minnesota are from Texas, with abortion now banned both there and in neighboring states.

"That's a far travel and so we are hoping that opening in New Mexico will help sort of mitigate some of the harms that are going to come across Texas," she said. "But keeping our sites open in Texas is not sustainable." 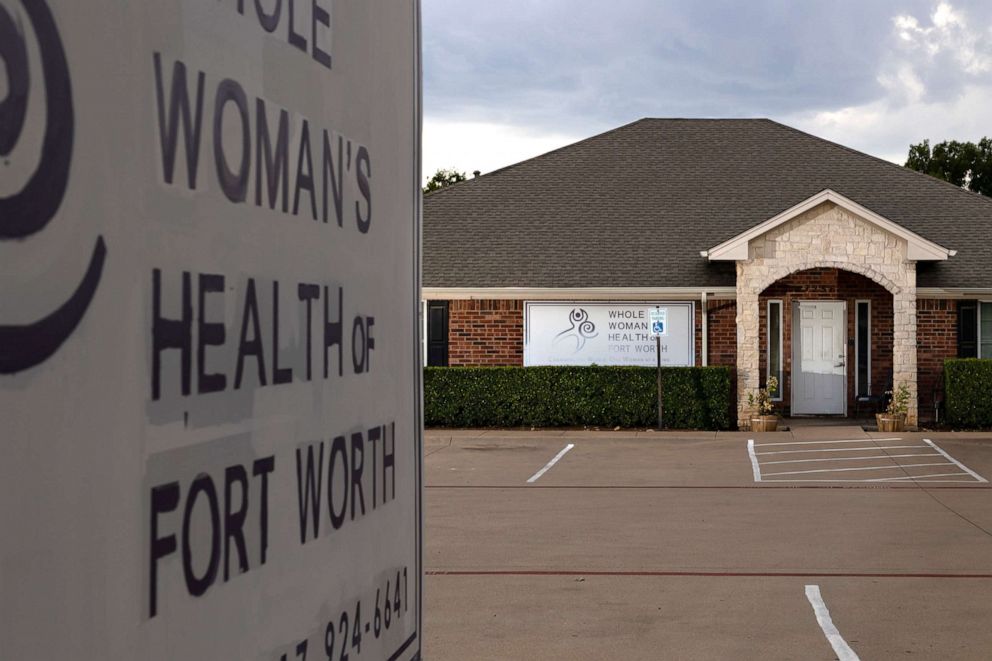 Bloomberg via Getty Images, FILE
The Whole Woman's Health of Fort Worth clinic is shown in Fort Worth, Texas, on July 3, 2022.

Whole Woman's Health's four Texas-based clinics stopped providing abortions the day Roe was overturned, even as patients sat inside the facilities awaiting care, according to Hagstrom Miller. Most of the Texas clinics remain open but are in what Hagstrom Miller called a "wind down phase" of packing up and answering phone calls from people still in need of care.

"The volume of telephone calls coming in is large," said Hagstrom Miller. "Oftentimes people don't know about all these restrictions or abortion bans until they find themselves facing an unplanned pregnancy, and they call us and our staff are put into a position of telling them all about what has happened over the last couple of weeks."

"So we're still answering the phone trying to support people as much as possible," she continued, adding that clinic workers are helping callers access care in other states and providing funding for travel when possible. "It's heartbreaking for us and it's traumatic for people who are trained to provide a service, and trained to provide that service compassionately, to all of a sudden out of the blue have to look someone in the eye and say, 'I can no longer provide the abortion that you need.'"

If Whole Woman's Health is able to open a clinic on the New Mexico-Texas border, it will be an approximately seven-hour drive from the organization's clinic in Austin and upwards of nine hours from its clinic in McAllen, according to Hagstrom Miller.

In New Mexico though, abortion providers say they at least see a place to land. The state's leader, Gov. Michelle Lujan Grisham, a Democrat, has vowed that "abortion will continue to be legal, safe, and accessible" as long as she is in charge. 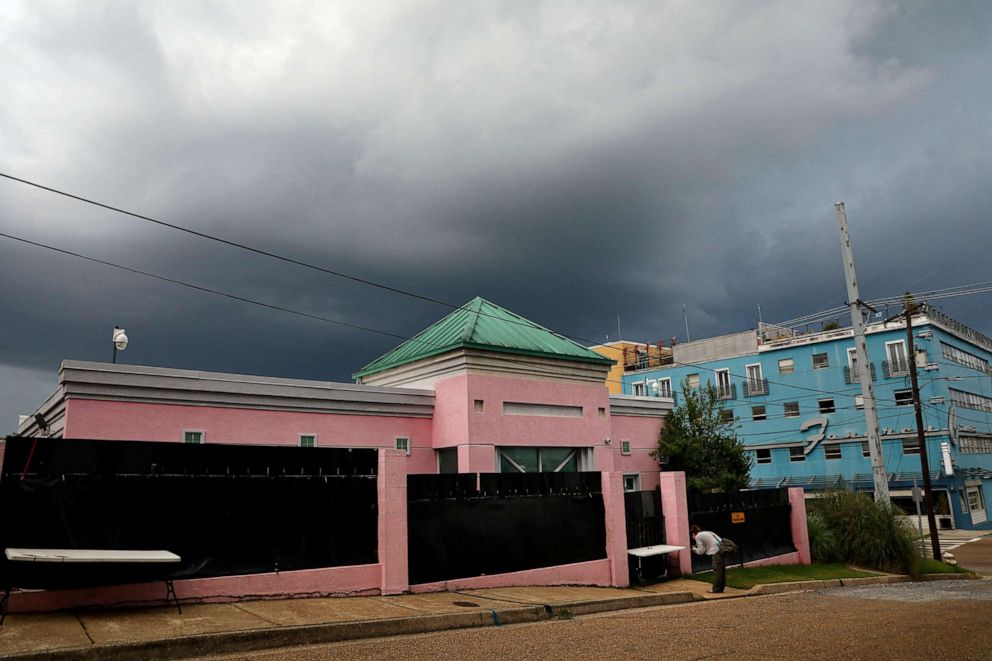 The clinic, which was at the center of the Supreme Court case that led to Roe's reversal, plans to reopen in Las Cruces, New Mexico, after Mississippi's so-called trigger law went into effect earlier this month, banning nearly all abortions.

"This is today in this country," Diane Derzis, owner of the clinic, told ABC News this month. "Mississippi is the past, and the future is moving on to where women have an option."