Former "Tonight Show" host Jay Leno will be spending Thanksgiving with his friends and family.

The comedian, 72, who suffered "serious" burns to his face, hands and chest during a fire at his home garage last week, was released from the Grossman Burn Center on Monday, according to a statement issued by Grossman Burn Center at West Hills Hospital and Medical Center in Los Angeles.

"I am pleased with Jay's progress, and I am optimistic that he will make a full recovery," Dr. Peter Grossman said.

The medical center also shared a photo of Leno posing with staff members. 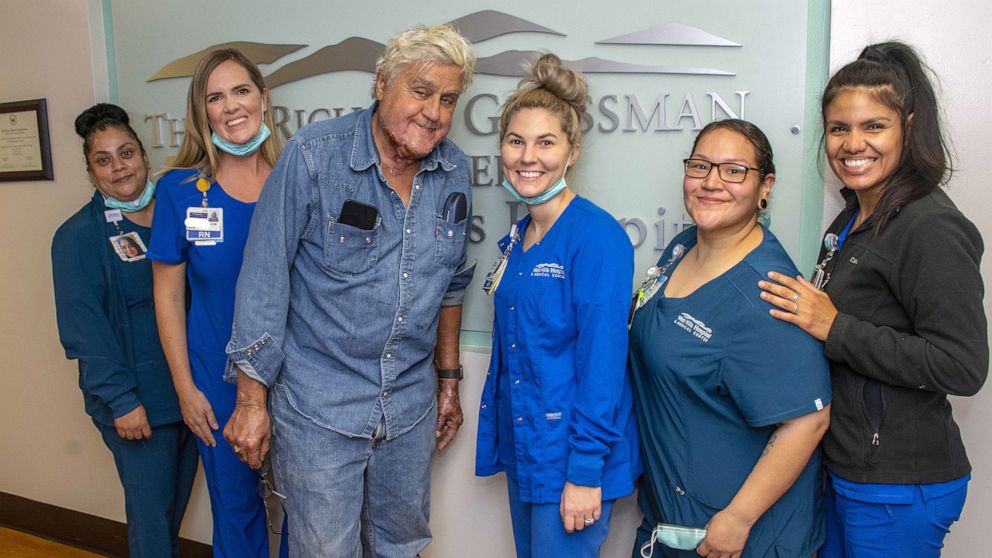 Last week, Grossman called Leno's burns "serious," but said Leno had been up and walking around the hospital cracking jokes. The comedian underwent two skin graft surgeries for the "significant" and "deep" second-degree burns and "possibly" some third-degree burns in the Nov. 12 incident, in which Leno was working on a steam-powered car when a fire broke out.

Leno will continue to receive follow-up care at the Grossman Outpatient Burn Clinic for burns to his face, chest and hands, according to the statement.

"Jay would like to let everyone know how thankful he is for the care he received, and is very appreciative of all of the well wishes," the hospital added in its statement. "He is looking forward to spending Thanksgiving with his family and friends and wishes everyone a wonderful holiday."